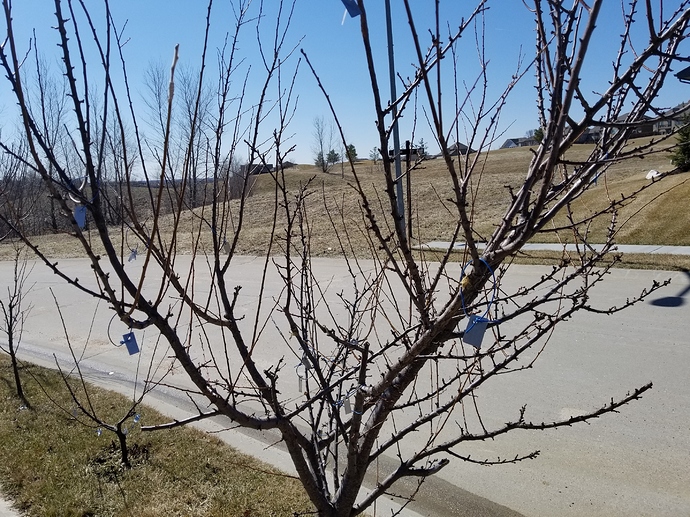 I have an Idea. I could just keep stack grafting one variety on top of each others in a following year and let each variety grow to 2 feet. What do you think?

I think each year, as the diameter of the tree increases, you will get additional room to graft additional varieties.

Here is Joe tree. He grafted his plum varieties on an Ornamental plum tree of some sort. My dwarting wild plum rootstock was from Missouri Department of Forestry. The tree is eight years old and only about 9 feet tall without any prunnig. This variety of rootstock is great for small back yard orchard. 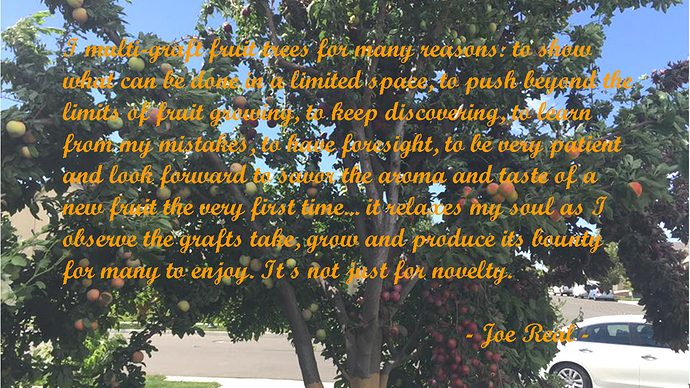 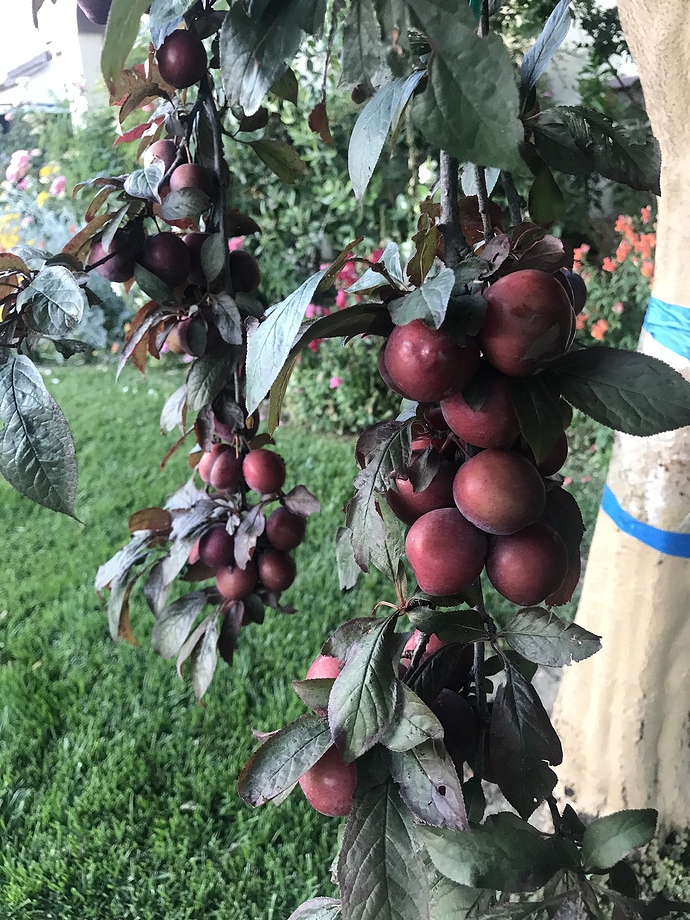 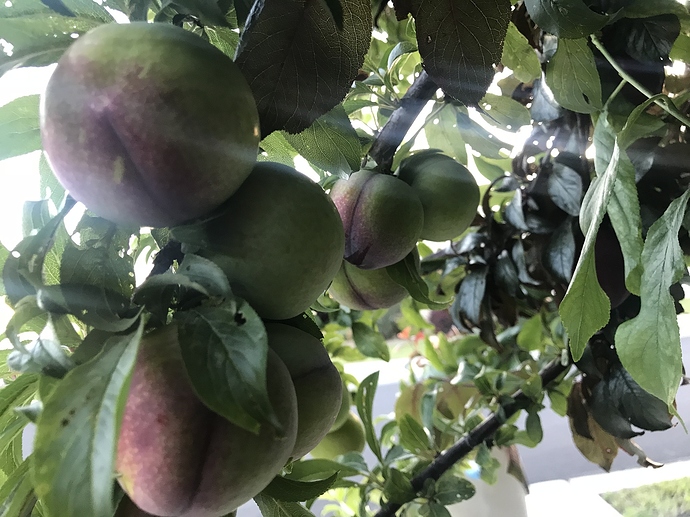 I’ve got just as many varieties on mine.

However I also have a multigrafted pluot and E plum. 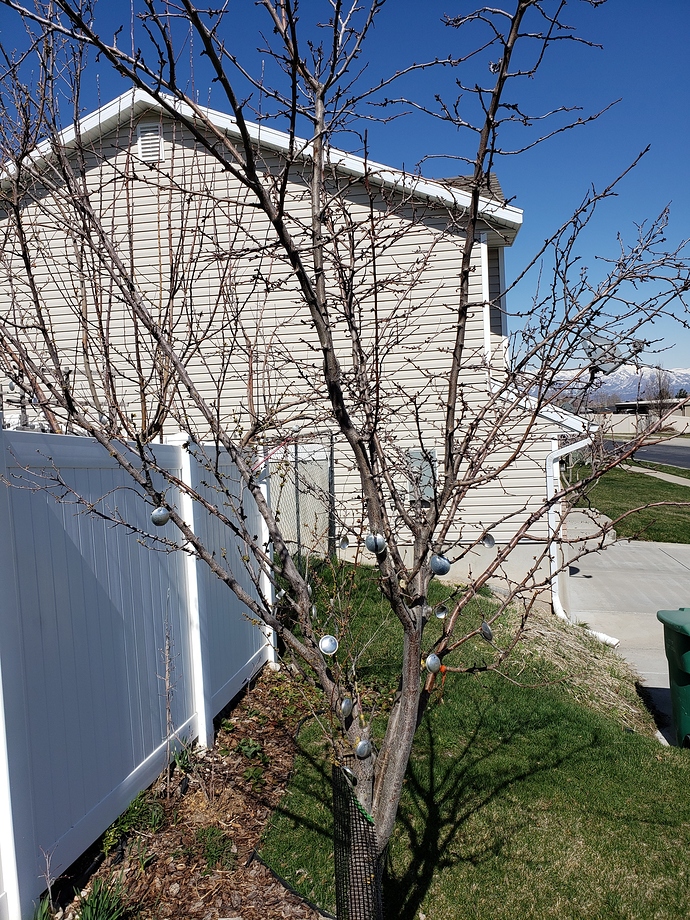 My dwarting wild plum rootstock was from Missouri Department of Forestry

It’s good to see you have Asian, American and European plums all successfully grafted onto that tree. Was the original tree Prunus Americana or another type of wild plum ?

I don’t know. I bought a bundle of 15 from Missouri Department of Conservation / Forestry for something like a $1 a peice about eight years ago. I asked them to send me the largest caliper rootstocks so I can graft and they did. It stated native plum. They do sent to different states also. The secretary was very helpful. They also sell pawpaw seedlings also.

You can download the catalog on your phone or laptop.

I put about 10 varieties on my Methley plum tree just today. Many duplicates so about 20 grafts in all. I had to stand on a ladder to do many grafts since the tree is huge.

Only have15ish, too far from the finish line. you can always find room to graft more😀

I probably have 20ish (taged and none taged) on my red leaf ornamental plum tree. Its branches are kinda weepy and I was going to take it out before I found out how well it is compatible with wide varieties of stone fruit family. I have grafted plums, both Japanese and European plum, Gage, Maribelle; Apricots; pluots; and nectarines. My Snow Queen nectarine grew better on this red leaf plum than on its own tree. I really love this tree’s versatility and I am put it on regular care schedule.

I’d say I have about 15-20 varieties on my plum, too. I just can’t imagine having many more varieties than that on a tree short enough to reach the fruit. 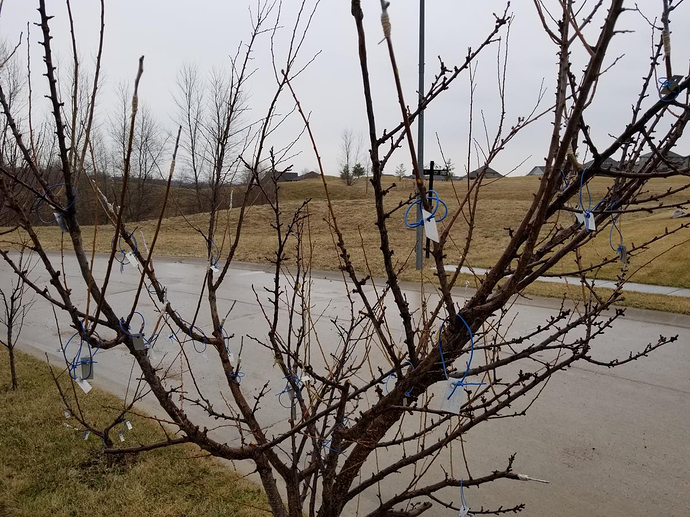 This is obviously the group I need to chat with. I have been trying to graft plum/pluots unsuccessfully for two years. Mostly I have tried forms of bud grafting but in each case the graft at first appears to take and then the bark of the parent curls back and the graft dies. What method are you using?

Cool. Your list remind me that I don’t have pluerry on my multigrafted tree yet. I thought I am missing something. Definitely want one on next year😀

I have an Idea. I could just keep stack grafting one variety on top of each others in a following year and let each variety grow to 2 feet. What do you think?

I think you run the risk of losing varieties due to black knot. Ideally, use a resistant rootstock, then the only thing that would get it would be the grafts. And hopefully you don’t need to cut out the whole graft, just part. I’ve been getting more black knot for the last few years and realized that I’m not pruning things open enough.

@tonyOmahaz5, my Shiro is on a plum seedling. I grafted 17 varieties on it, J plums, hybrids and plouts only. No E plums.

Last week, I had to remove two branches due to Black Knot: a whole branch of Lavina because Black Knot was right at the graft union, and one Flavor Delight (?) because it was grafted on a Shiro branch that had BK so bad, the whole 6-7 ft branch had to be removed.

BK is a serious plum problem.

I am doing 50% Cleft graft and 50% Bark graft. You can watch on You tube about these two techniques.

Thank you Bob and Mamuang for the BK infos. So far this wild plum rootstock from Missouri Department of Conservation that I grafted the Flavor Sumpreme on first then three years later that I grafted the rest on to the FS and no Blacknot so far. This tree is only about 9 feet tall at 8 years of age.