Improved Kieffer always produces a nice crop of canning pears. Not everyone likes these fresh. These pears are extremely late this year. Even now I’m picking them somewhat early. There was ice on the truck last night and it’s been getting very frosty here in Kansas. Today is October 16th 2021. They are hard as a rock and very few blemishes having been grown chemical free for many years. They don’t need sprayed. Not everyone will like these. On a 1-10 flavor scale I’d rate these a 3. They are not in the same class of pears as your melting, complexed, sugary European pears. These pears are heavy producers intended to be grown as food for winter. There are lots of them and we always have to many. Hundreds of pounds are picked and there are still plenty for any human or animal that is hungry. 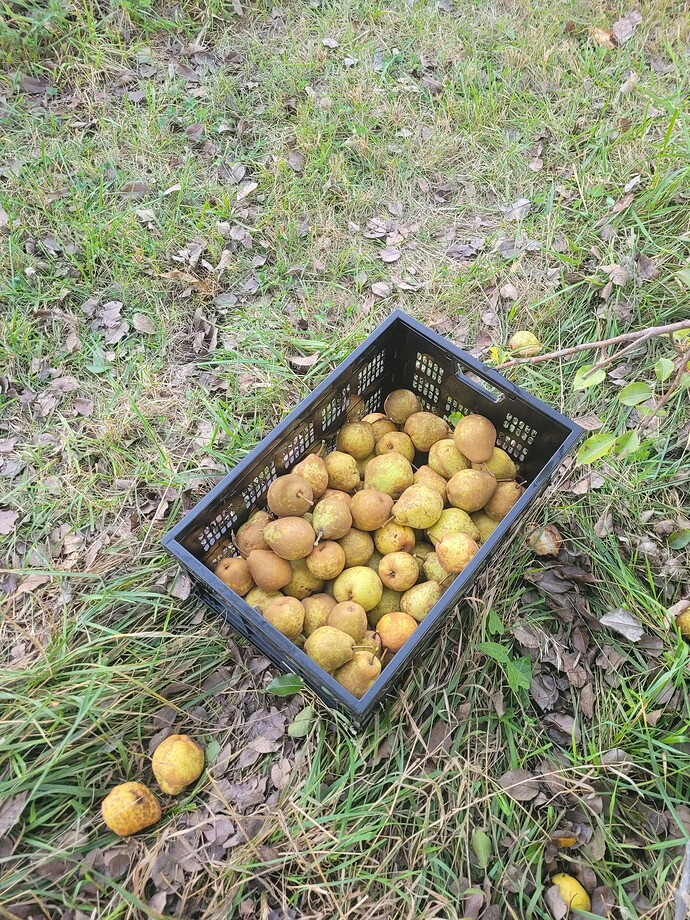 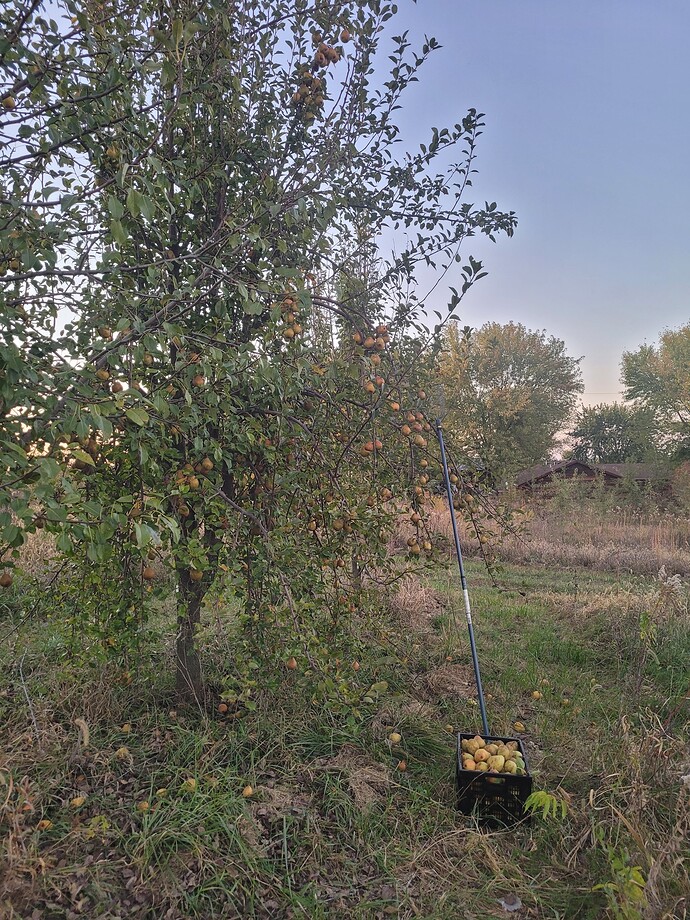 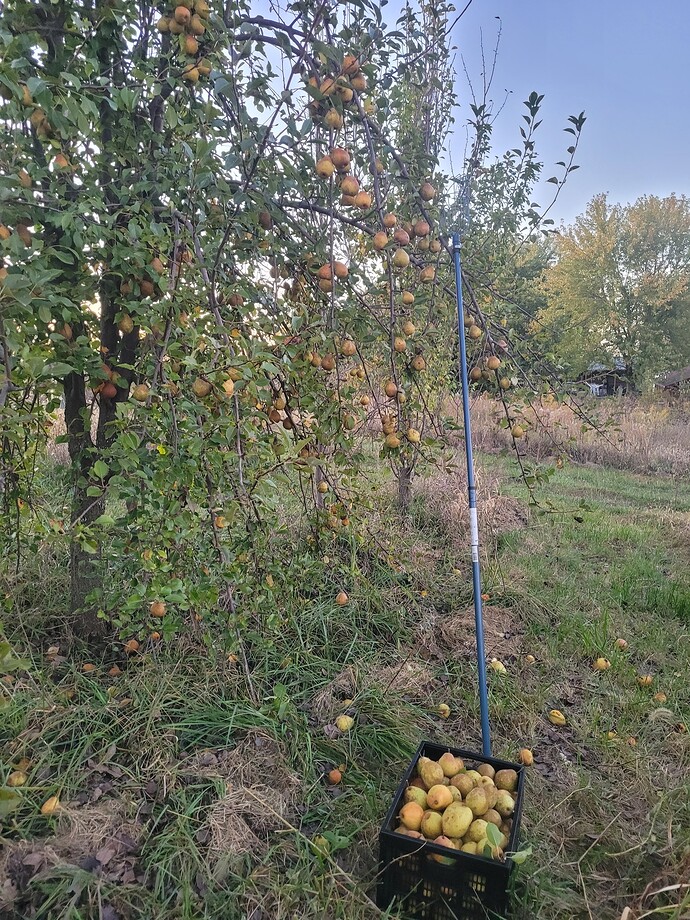 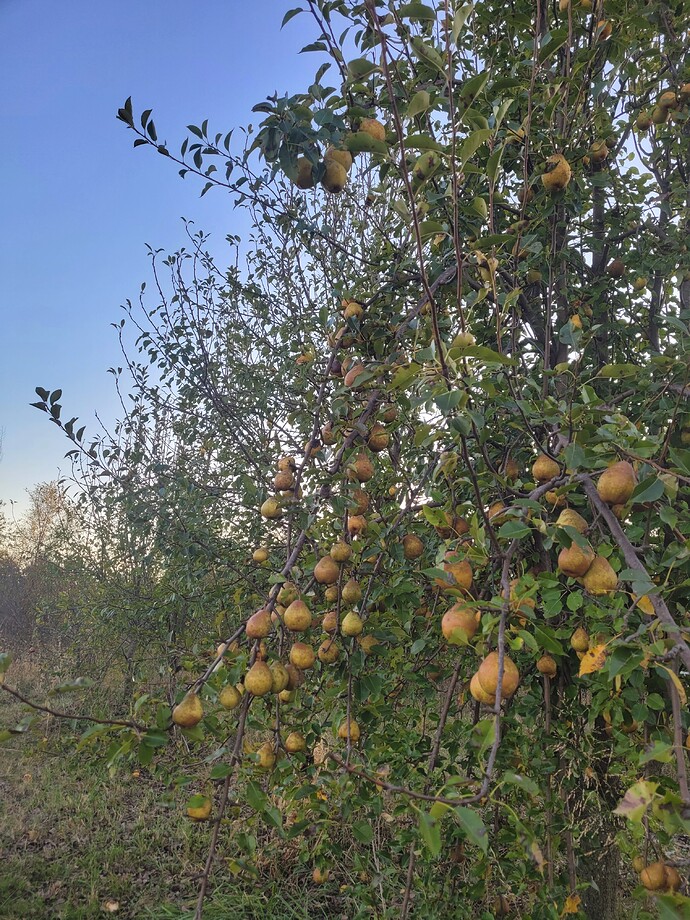 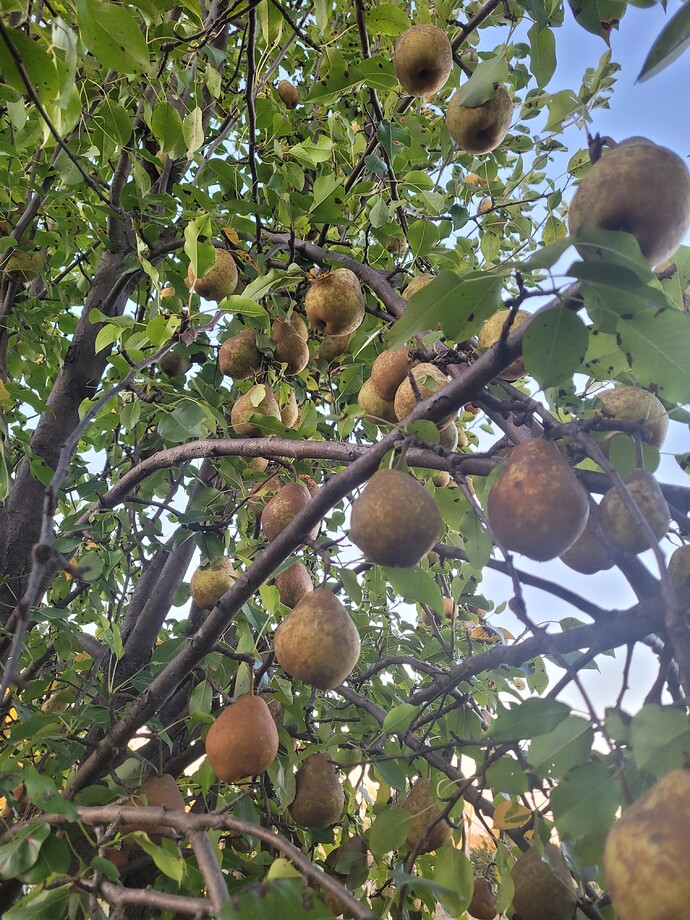 I thought improved kieffer was the earlier one, and regular kieffer is the later?

Typically it is but this year our late winter has the pears ripening times very messed up. Many years I have picked this pear in July or August.The real Kieffer are not even close to ripe on my property. They are very different pears. 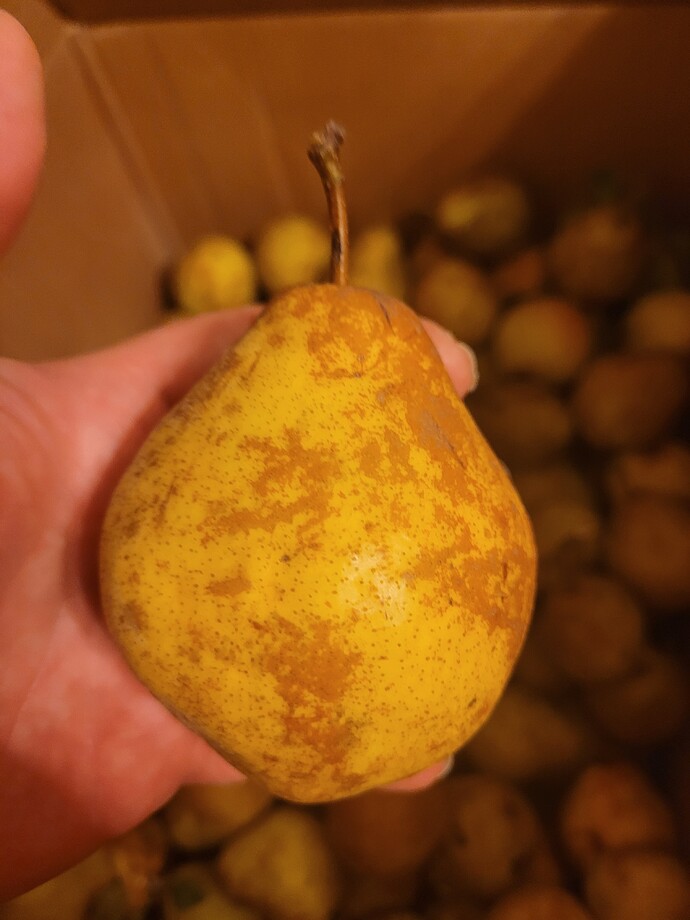 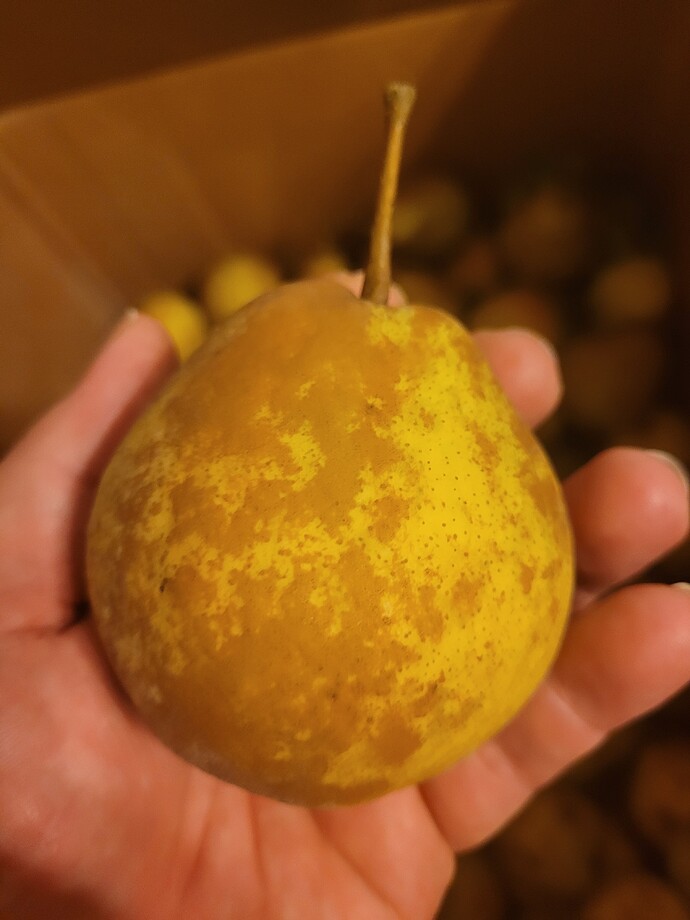 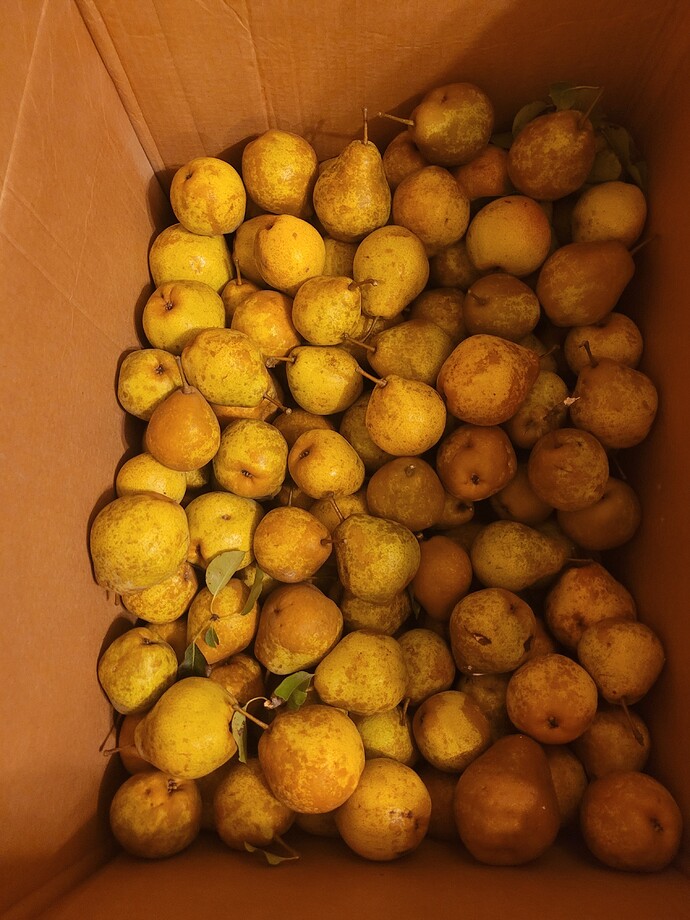 Wondering which one tastes better improved or regular

Prefer the regular Kieffer myself for fresh eating. Improved Kieffer are very heavy producers and typically very early. You can see why someone would grow this pear. Once my raccoons and deer eat the windfall pears there are still plenty for family, me, friends and everyone else. Coyotes or possums even eat one now and again. Cinnamon, nutmeg and sugar cover a multitude of sins with a canning pear!

Your venison must taste great!
When you pick the regular later do you treat them as Europeans and refrigerate them for a couple of weeks or do you just set them on the counter in other words do they need a cold treatment thanks Clark.

No I have one tree of regular Kieffer on ohxf333 they may not get ripe until mid November this year if they even get a chance. I would not refrigerate these coarse hybrid pears. As I said on a 1-10 scale I would rate them a 3. Low sugar content , lacking complex flavors, nothing remarkable about these besides the quantity of pears. They have had plenty of cold treatment there was ice on the truck this morning.

Maybe you were living under smoke clouds this year

Our regular kieffer are starting to fall off now and improved kieffer is mostly done.

Winter hung around an extra month. As my full sized trees in my orchard matures some trees shade others and I plan to use that soon enough on hot years to extend my seasons. 1 Harrow sweet ripened early the other a month later. They usually ripen at the same time. Harrow delight ripened right on time. Im still learning tricks about growing pears. Glad to hear your pears are running on time. Every year is different here. Here is an example of the windfalls. Wasps and stink bugs get plenty to. The picture below tells us something has been through the pear buffet line recently. 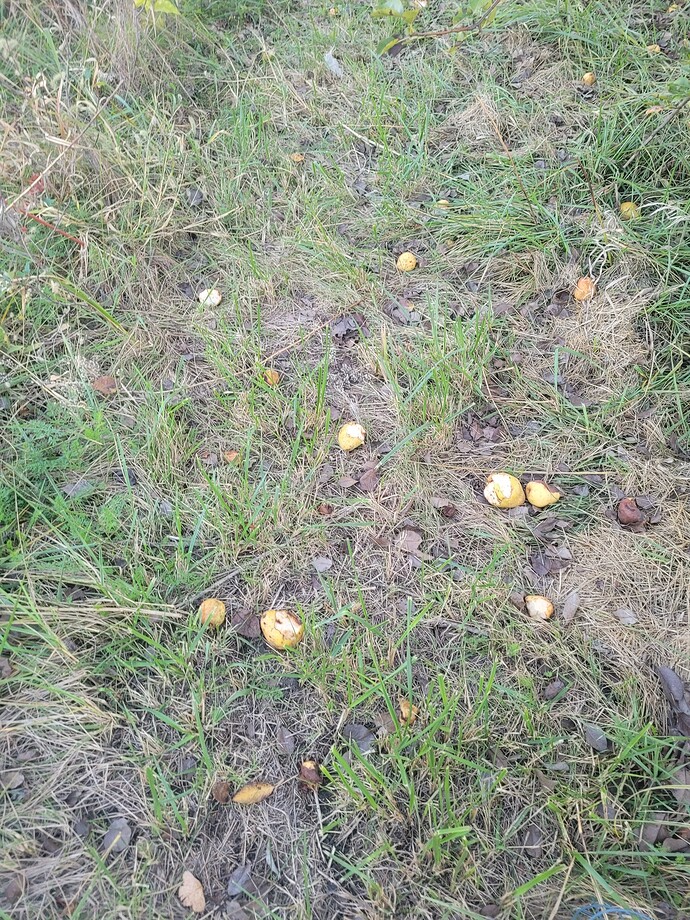 Yes, I was trying to figure out what might be different because we had a real cold winter too and are colder here than you…including an April freeze down to 18F with the pears in full bloom. I wonder if it was a specific cold event that triggered your trees that I somehow missed? Our “spring” was extremely delayed this year like you, but evidently the summer here made up for it somehow. Can we ever get a “normal” year? I wish!

That’s a very nice crop! How old is that tree? Sounds like a kieffer would be a nice addition to any orchard.

That tree is around 10 years old. There are actually 5 of those trees each producing over a hundred pounds each on a normal year. Most I give away to other people and the wild animals ofcourse. Everything on my farm is in balance. It was not always that way. These trees produce pears in 5-7 years on normal standard callery rootstock.

Sounds to me like a meh pear at best. I doubt I could even grow them here. Our spring season starts in May and ends in October around Halloween so I would be surprised if they would ever get ripe here or anywhere that has the same climate as me. Taste does not sound too great either. Just production values. Here in Colorado we get jealous of the Kansas weather.

Kieffer and most hybrids are considered second rate pears. Their purpose is canning. You can read more about them here Kieffer Pears Information, Recipes and Facts . When you buy a can of pears at the supermarket its usually what your getting is Kieffer. Improved Kieffer is similar. Some people do prefer them but most do not. Those people like @Lucky_P really do love them. There are times when I like them. Most people think they are getting Bartlett in a can but it’s most likely Kieffer.

Kieffer pears are medium to large in size and are elongated in shape with a wide bottom that tapers into a smaller, rounded neck. The semi-smooth skin is light yellow to pale green with prominent lenticels and deep red blush, and the stem is slender and dark brown. The cream-colored to ivory flesh is coarse, crisp, and firm with a central core encasing a few dark brown seeds. Kieffer pears are described as having a musky aroma and are juicy with a mild, sweet flavor.

Kieffer pears are available in the fall through winter.

Kieffer pears, botanically classified as a cross between the European bartlett pear, Pyrus communis, and the Asian sand pear, Pyrus pyrifolia, is an old American variety that is a member of the Rosaceae family along with apricots and apples. Kieffer pears were once a popular variety to plant in orchards and use as property lines for farms, but due to modern day consumer preferences, it has decreased in demand. Growing up to six meters in height, Kieffer pear trees are resistant to disease, prolific, hardy, and have a long life. Kieffer pears require a chilling period which allows the fruit to ripen over a period of time and are classified as a winter pear used for canning, baking, and fresh eating.

Kieffer pears are best suited for raw applications, cooked applications such as baking and poaching, and canning. They are most commonly used in preserved or canned preparations when their flesh is still firm and holds its shape well. They can also be used in sauces with honey, sugar, or lemon to enhance the sweet flavor. Kieffer pears can be used in baked applications such as cakes, tarts, pies, muffins, bread, and popovers. They can also be used as a dessert pear if allowed to ripen for several weeks. Unlike other common pears, Kieffer pears need a period of chilling before they are ready to be consumed fresh. The pears are harvested while hard on the tree and are put in the fridge or cool storage area. After storage, the pears will begin to soften and can be sliced fresh for a mild, sweet flavor. Kieffer pears will keep for several weeks when stored in a cool and dry place or several months when stored in the refrigerator.

Many old homesteads used to plant pear trees as signs of luck and to help determine property lines. They were also used as a source of food to sustain the family living on the homestead during the winter months. As supermarkets increased in popularity, ripe food became readily available, and the consumer market turned to desire immediate gratification rather than individual cultivation. As a result, many Kieffer pear trees were abandoned as the fruit requires a chilling period and were not instantly ready for consumption. Many abandoned farms and homesteads still stand today, but despite the lack of use, many Kieffer pear trees still survive due to their hardy nature, marking the spot where a family used to live.

Kieffer pear trees are native to the region surrounding Philadelphia and were first recorded at Peter Kieffer’s fruit nursery in the 1870s. Kieffer pears formed from an accidental cross between a sand pear and a bartlett pear and were cultivated for its firm flesh. Today Kieffer pear trees grow in a remarkable range of climates because of its hardiness, ranging from New England to the southern United States, and are predominately found at farmers markets and specialty growers in the United States and Canada.
"

The Kieffer Pear is an old-fashioned favorite, and is the most widely grown pear of the South, found near farm houses from east Texas to Georgia. Kieffer is a large pear with greenish-yellow skin blushed in red and has coarse crisp, juicy, white flesh. This productive pear tree is self-fertile and ripens October-November. The Kieffer Pear Tree is the most popular pear planted by deer hunters. (400 Chill Hours) - https://www.willisorchards.com/product/improved-kieffer-pear-tree

Some people do prefer them but most do not.

This year, my kieffer are surprisingly slightly better than torture. I take a few bites just to prove to myself that I’m somehow tough…before eating something better. I can actually taste some sweet in them off the tree this year, but there is definitely a bad aftertaste too. We had a freeze of 27F, so I don’t know if that helped or what…but some years they get a bit of a better taste. Most often not though.

Remind myself as I type this how many times this wonderful unppreciated pear has saved my family a great deal of suffering. I’m not suggesting @elivings1 is wrong about their opinion on it being a “meh” pear that is accurate. As we experienced shortages as grocery stores ran out of items and heavy inflation I am suggesting Kieffer or improved Kieffer is the potato of pears. Many times the potato fed the Irish who made it famous and still feeds us today. Recall the great potato famine caused much suffering in history. Like the potato don’t try to eat kieffer plain because though you can it’s not that great. The Kieffer really is meant to be cooked with, dried, canned, sauced you name it it’s possible. We are only limited by our imagination in using it. Setting our expectations about this improved Kieffer pear is key to being happy with it. These blocky sometimes lop sided kieffer or improved fruits are the reason why some pioneers survived. They are the reason I began growing pears. There are a few homesteads remaining in this area but there is little more left than their pear tree.

Maybe you have tried pickled kieffer pears but they are so good! I like harder pickled stuff so they are perfecto for that.

They are so hard to peel

There skin is like sandpaper and my thumbs get soar.

Use a potato peeler. Wear those Playtex dish washing gloves when you try peeling them.

clarkinks- we used Kieffer pears a lot some years back when I had a full size tree. They were very good for pear butter. I enjoyed eating them before they get really ripe. I eat them when they have a texture like an apple. That, to me, is when they taste the best.