Any body tried Lucy Glo? These were in a jumbled bin at Chuck’s produce. I’ve never had it so I bought one to try. Wish I’d bought a bag, the one was quite good.

It’s crisp, very juicy, sweet tart and beautiful inside. My wife will think its too sour, but its got lots of sugar. Had a bit of fruit punch flavor in the background.
This may be the best red flesh I’ve had but for maybe some Aerlie’s Red Flesh/Hidden Rose and the texture was probably better.

I don’t know if I just caught them a their best, or if this is an apple to look out for. The one they had cut open at the store looked a lot different than the one I ate. I apologize for the poor cut picture, it was an afterthought.

edit: turns out this is a club apple. I guess I shouldn’t be surprised based on the apple, but there sure wasn’t much fanfare at the store, and it was only $1.50/lb.

Thanks for the tip. They sound delicious.

BTW, it didn’t have any seeds.

Interesting apple. TY for posting this.

I’m curious to hear what others think. I only had one. I’m looking forward to getting more. I mostly loaded up on Smitten. They had conventional and organic, the organic were significantly redder so I got more of those.

Jafar, thank you for posting that. I thought about going to Chucks but it was Saturday. I have to do it on a day when on my own, or I get into trouble for buying apples when I already have so many ripening apples in my garden

Looking those, up, apparently a HoneyCrisp cross. I think HoneyCrisp is the next Jonathan in that it will be a parent or grandparent of many new apple cultivars. Maybe soon, “JonaCrisp”?

Beautiful red flesh! Weird not to have seeds. I wonder if they used a blossom set type of spray.

I bet there will be more red flesh apples along the way. I have a one-year-old Redlove Era. Deer just ate all of the leaves, but it’s October so maybe that won’t matter. I’m hoping for another type of Redlove to add this year if nurseries carry it.

Thanks again for the information. Interesting to see that!

I tried it yesterday. It was pretty good for a modern apple, certainly better than Honeycrisp which is apparently a parent or grandparent.

The first photo of two apples is mine. The photo of the reddish flesh came from the internet - 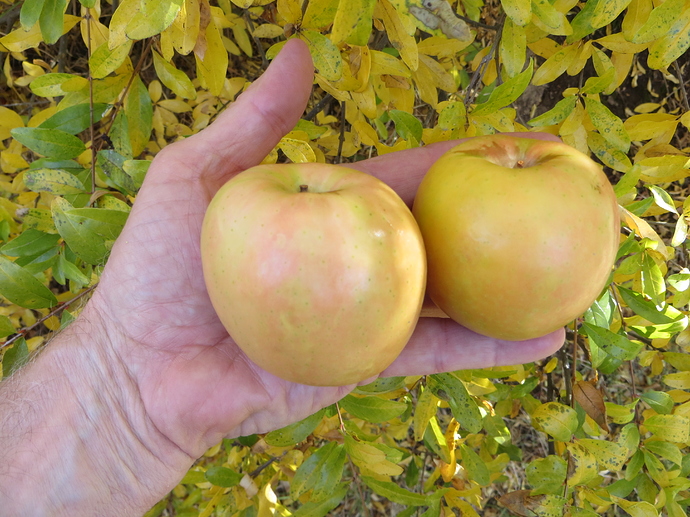 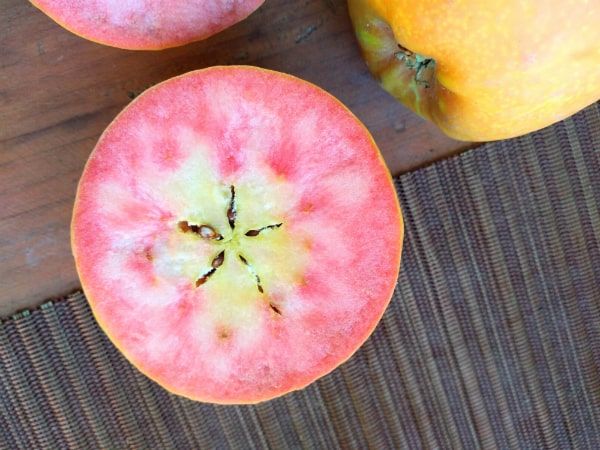 How did it taste? I love the look of the red flesh peaking out through the yellow skin

It’s a very crispy apple although not as crisp as Honeycrisp. It has a slightly complex slightly tart flavor which puts it above most modern apple cultivars for me.

Its gorgeous and sounds great, I wonder how it does with Fireblight? I feel there has to be some genetic link between red flesh and astringency reducing fireblight resistance (Or atleast what i have seen from 6 or so cultivars)

Growing characteristics probably only matter for price and availability, I don’t think Lucy Glo trees will be available for the general public for a long time.

It’s a very crispy apple although as crisp as Honeycrisp. It has a slightly complex slightly tart flavor which puts it above most modern apple cultivars for me.

I can add, that a left a couple on the counter for 2 or 3 weeks and they were still delicious, with a texture still better than 90% of grocery store apples. 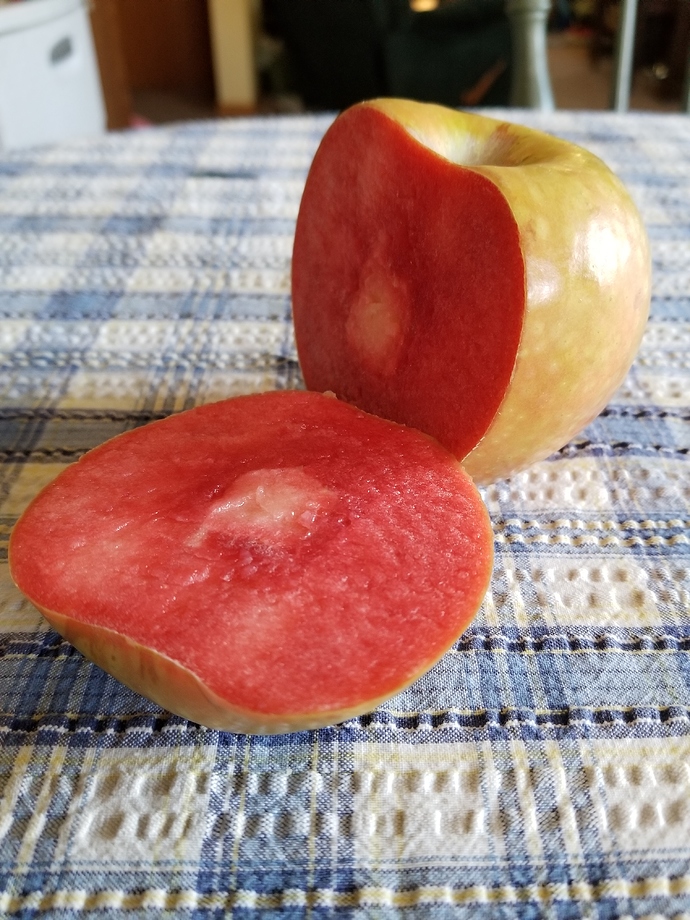 I picked these out at Cub because the skin looked different and they smelled nice. I had no idea before biting into it that it would be red fleshed! What a nice surprise.

They are sweet with a cherry koolaid flavor in the background. The skin is a little chewy but not too much so. I can taste the honeycrisp sweetness but not as crisp. This one hasn’t got any spicy or tart flavors to it but the berry flavor makes it interesting. A really good apple. Im glad i bought a bag full.

Yes, they are quite good. I wish I could find more. Apparently the place I got them from can only get field run, and they aren’t attractive and a little beat up, so nobody was buying them - except me.

I bought some at Trader Joe’s in California yesterday.

Right. You’re allowed to grow any seed from a purchased fruit.

For some reason the ones that I keep getting seem more red on the skin than yours. I liked this apple so much, there is a floral hint in the taste. What other red fleshed apples can we grow? 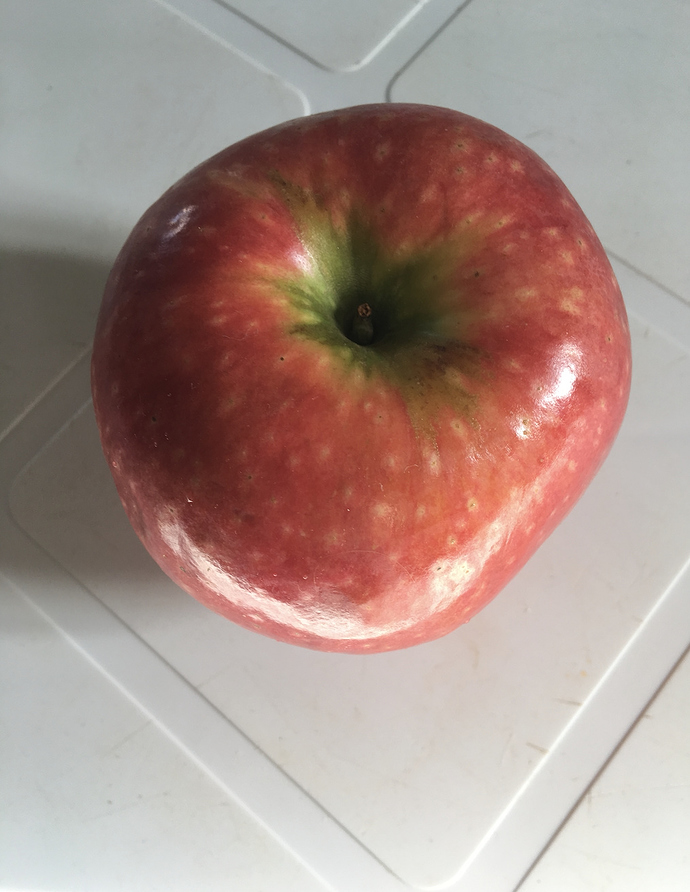 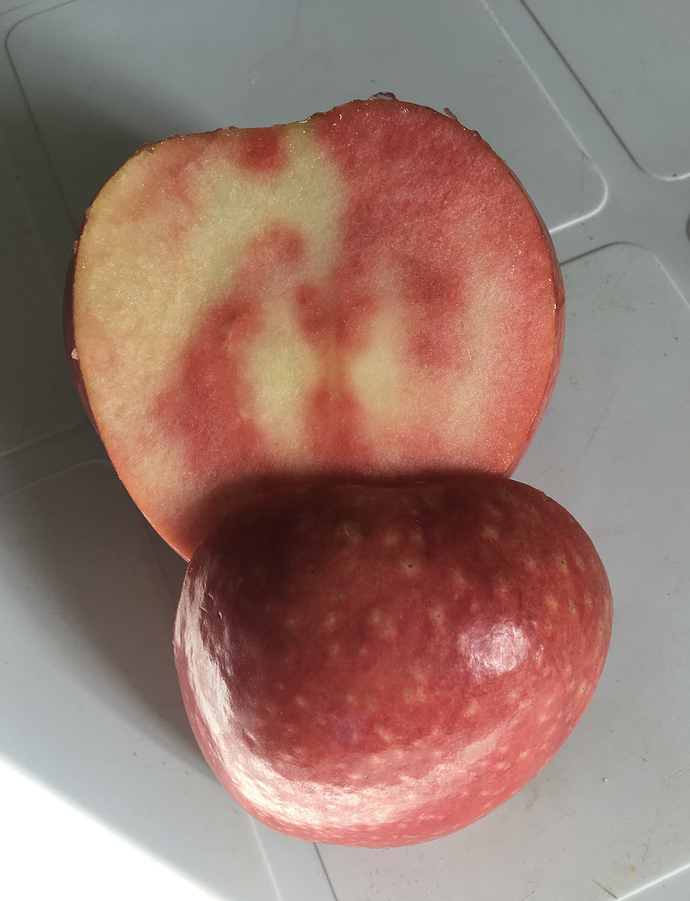 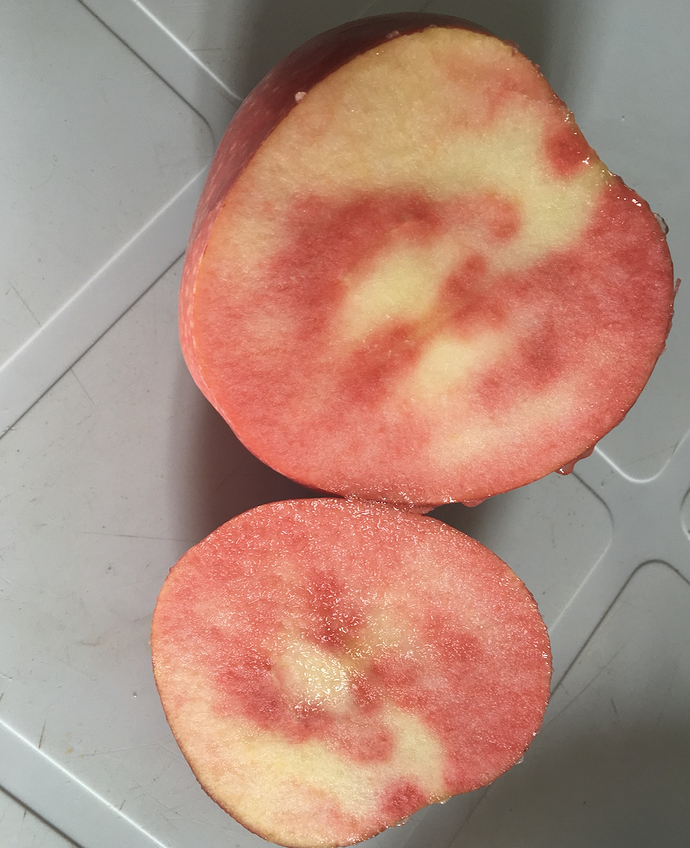 EDIT: It looks like this is a Lucy Rose and not Glo.

I tried both. They are both great apples! I prefer Lucy Glo. Makes me wonder too, what can we grow that’s comparable??

We bought one and liked it. Ours was very solid, pink inside. I didnt realize that it was a red fleshed apple until I cut into it.

What other red fleshed apples can we grow?

Plenty of discussion about that around here. This is a good place to start:

Hi all, I’m curious what people’s experience with red fleshed apples is. I don’t have any, but I’d like to get one. My goal is to do some breeding work with one. It seems like most breeding has been done from Niedzwetzkyana Crabapples. So that seems like an option. Or maybe there are other options out there. Arboreum offered arborose last year, which sounded pretty good, but they’re good at marketing and tend to make all their stuff sound good. Thanks, -Steven