the deciduous fruiting stems are quite delicate, especially when loaded with fruits.

actually ate many of the fallen immature li and sihong , which had a brisk, sweet-vegie taste.

Now THAT makes me cry! To not have any is bad…to lose beautiful fruit is sad!!!

We had unusual wind in June also. Not so as to blow off many branches but I’m not sure the pollinating insects could fly in it… just strong continuous winds.

well i shouldnt really be complaining since still have plenty left on the trees. The vast majority that are not chico, booty, and sihong end up being donated anyway, lol.
but yeah, kind of sad the giveaways wouldn’t be as hefty…

only this year that v kinky produced stereotypical contorted laterals, shown here still as greenwood exhibiting longer internodal segments and longer thorns(top of photo) compared to the relatively ambiguous pigtail lateral beneath it that bears one fruit(seen at bottom of photo, borne on lignified squiggly stem with shorter internodes). This could mean the fruit from the ambiguous lateral may not have the same quality as subsequent fruits borne on the long-internode lateral 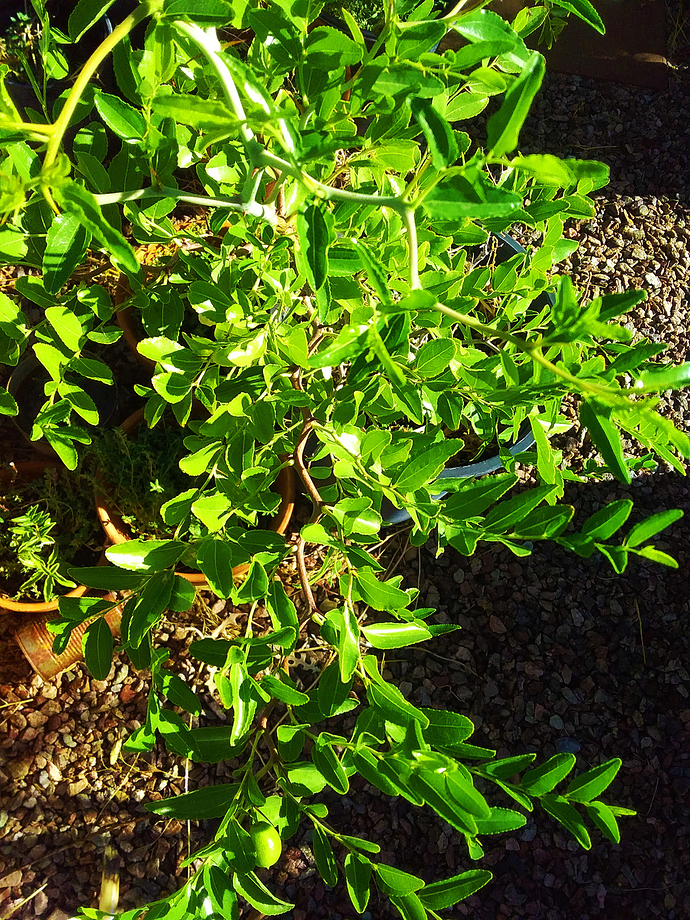 This is a jujube Honey Jar seedling that germinated in mid March. She has high goals! 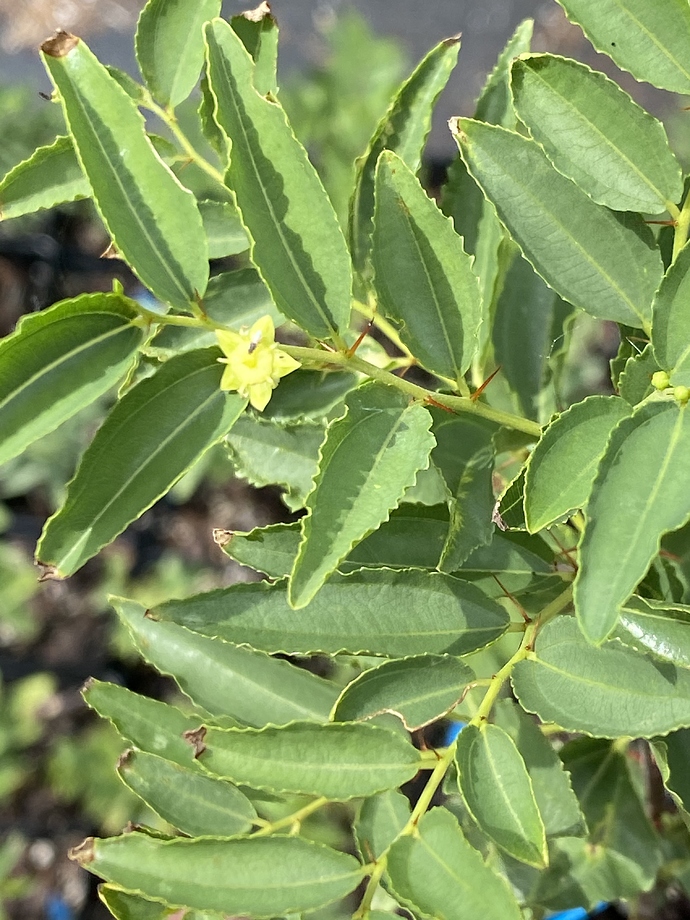 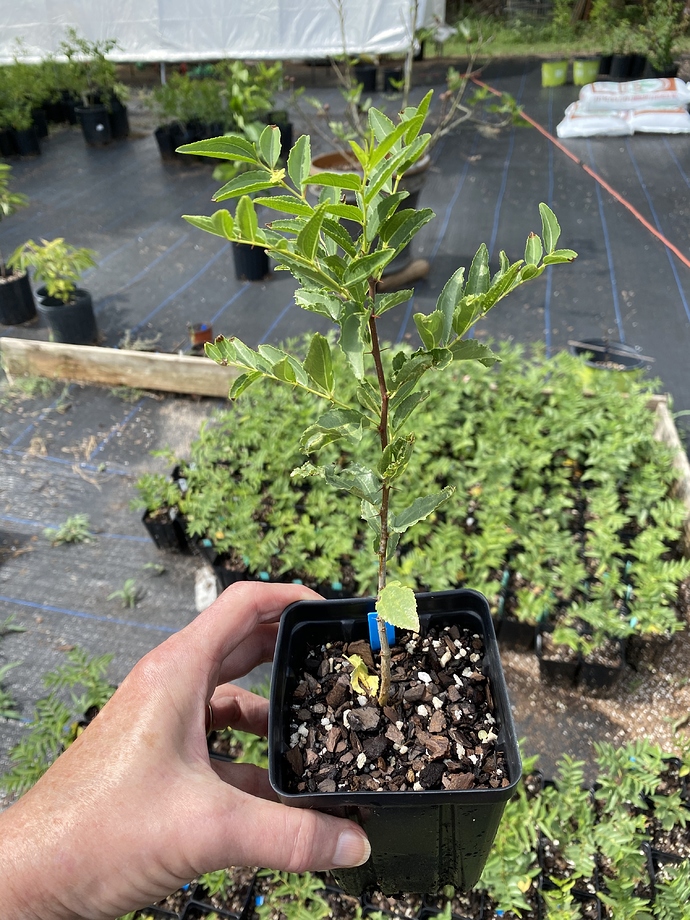 Uber amazing right? Theres just no fruit species that matches juju precocity and projected longevity. Have grown all manner of stuff from seeds-- including precocious and/or long-lived tropicals. Papayas may start blooming in less than a year, but will senesce and decline rapidly past 4 years. Mangosteens and lychees may be productive for several centuries, but will take more than 8 years to start blooming, and in the case of lychee-- sometimes will take 50 years…

Btw, some juju seedlings are capable of bearing fruits on same year of germination, which means no chill hrs necessary!

Btw, some juju seedlings are capable of bearing fruits on same year of germination, which means no chill hrs necessary!

@jujubemulberry do you have a source for that? My friend claims her volunteer jujube tree grew from seed and then flowered and fruited 4 months later. I would love to be able to prove or disprove that.

My friend claims her volunteer jujube tree grew from seed and then flowered and fruited 4 months later.

This one is 4 months old… I guess that would depend on fruit set. I have several 2019 seedlings planted in late August last year that have multiple blooms. They have been through dormancy though.

Have grown jujus from seeds for several yrs now and every now and then will have some that will bear flowers but no fruits, but one or two will bear fruit on the same yr they were sown.
@k8tpayaso has witnessed it for herself with her precocious specimen she just posted

here’s a juju seedling(from ant admire pit) that produced fruit on its first year. It was sown early this year, and even appears to be producing a sizeable fruit considering its age. Most precocious jujus produce pea-size fruits(shown on the video at beginning of this thread). Below juju seems to be on track to attain the size of a kidney bean, haha. Of course, subsequent crops tend to get bigger as the seedlings mature. 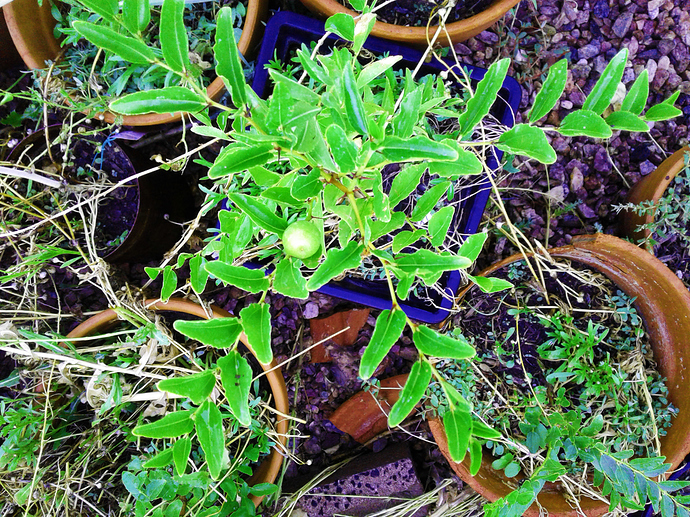 20200707_183952.jpg2576×1932 1.51 MB
btw, @starfruit, if none of us here can quote literature re: the “dubious” precocity of juju seedlings, it is for the simple reason that there isn’t any written about it, at least here in usa.
There;s none mentioned by academes here, and no online postings that i could find outside of america either. Jujus are still a DIY project for us americans. Can safely say more than half of what know about them was just from my backyard findings, especially the critical aspects of their growth and development
starfruit 2020-07-08 06:05:52 UTC #413

@jujubemulberry I thank you for sharing your photo and knowledge, this is the proof I was hoping for to corroborate my friend’s story of her jujube tree that seemingly sprung up from nowhere.

Here’s an article I came across from an academic source that describes the precocity of jujube and producing in the first year. https://aces.nmsu.edu/pubs/_h/H330/welcome.html

Even more amazing is this article that claims “50% to 95% of trees produced during their planting year, depending on cultivar and location”.
https://journals.ashs.org/hortsci/view/journals/hortsci/54/11/article-p1941.xml

I’ve been taking for granted the old jujube tree in our backyard, tomorrow I’ll give it some extra water for the hot weather

Are there any good tips to get a yield of juicier and more firm fruits? I don’t really enjoy the dry ones that have the texture of styrofoam.

Thanks for sharing @starfruit
yes, it is true that a great number of grafted jujus will produce on year of planting/grafting as pertained to in the links
was hoping though the links explicitly mention of jujus grown from seed. The links alluded to trees of named cultivars. That they are already named or referred to as trees indicate they were not grown from seed, but from grafts. Also, 50% to 95% of the trees being productive on same year as planting insinuates that those were grafted trees.

50% chance producing the same year is a bit too high for juju seedlings, so 95% would be miraculous, but of course i myself wish am wrong, and will actually throw a party if proven wrong

from my findings, would say only 2% of my seedlings did that, at least here in vegas. I can safely say have grown at least 2000 seedlings over several years

there any good tips to get a yield of juicier and more firm fruits?

your tree is probably a li or lang. You can graft some honey jar and sugarcane scion wood to your tree. Those are the two most readily available ones that are favored for juiciness

below may appear to be a precocious seedling but it is actually a slow-growing hj seedling 4 to 5 yrs of age(as evidenced by its gnarly trunk, albeit tiny). Had originally sown it on that little pot, which evidently stunted its growth, but soon accessed some extra soil when i placed it on the bigger pot, which the plant took advantage of by growint roots into it. If the fruit is any good, will surely poach the root segments which invaded the wider-mouth pot 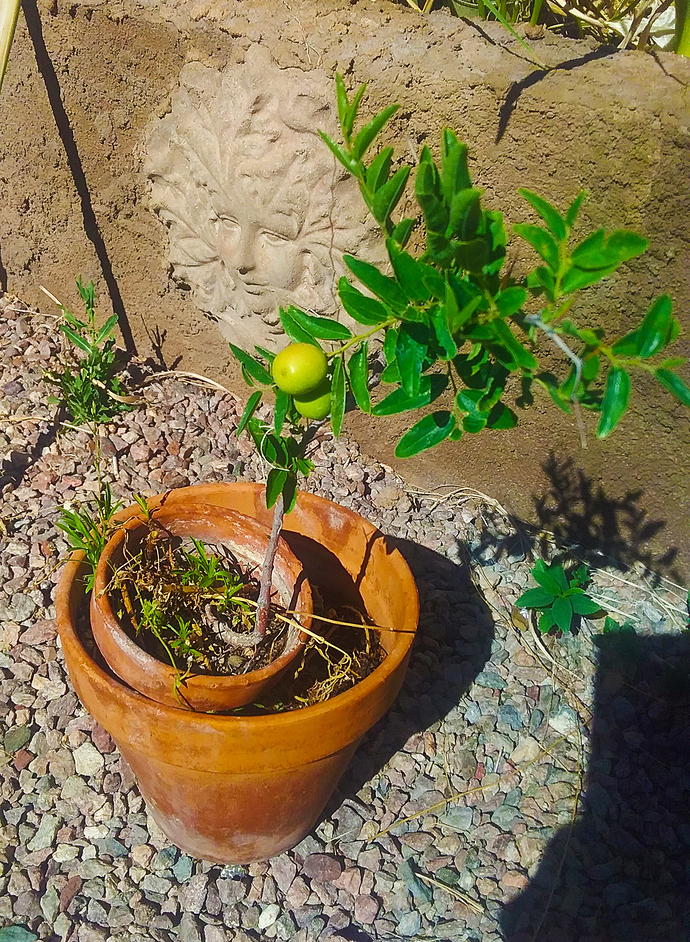 I checked my trees today and I have fruit set on Vegas Candy. All fruit has dropped on Booty and Spicy but the grafts are growing and healthy. I also have fruit on a couple of Contorted seedlings that were from Vegas fruit. One is looking especially good. Thanks to Vegas scion wood it looks as if I will get to taste R4T3 and Coco this year.

quite promising, despite some temporary hiccups
hope those first fruits get nursed to full maturity

sweet tart on its own roots, fruiting for the first time. Probably won’t be at their prime considering the compromised condition but nonetheless looking forward to it! 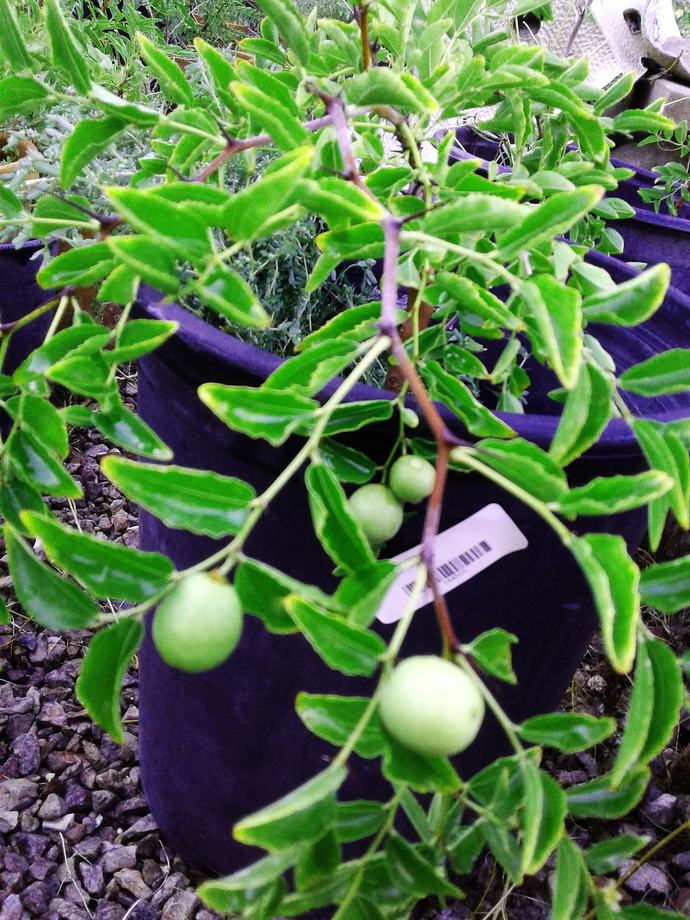 follow up to the (sweet) peas in a pod.

V. spicy sizing up, but unfortunately getting toasted at 110F. Really curious as to how the high heat would affect juiciness. Hopefully has some hj or sc genes in it to maintain juiciness even in hot weather 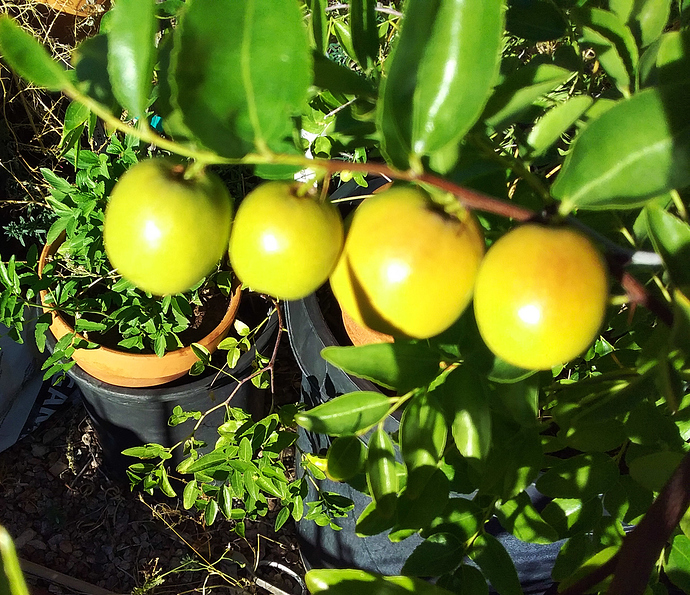 and below is sihong junior grafted to a mature tree-- burntridge’s contorted. The sihong seedling(still in a pot) also produced fruits but smaller than this, so evidently the age of rootstock and access to mother earth helps despite having been grafted early this year.
will christen it ‘vegas lucky’ if fruit quality turns out great 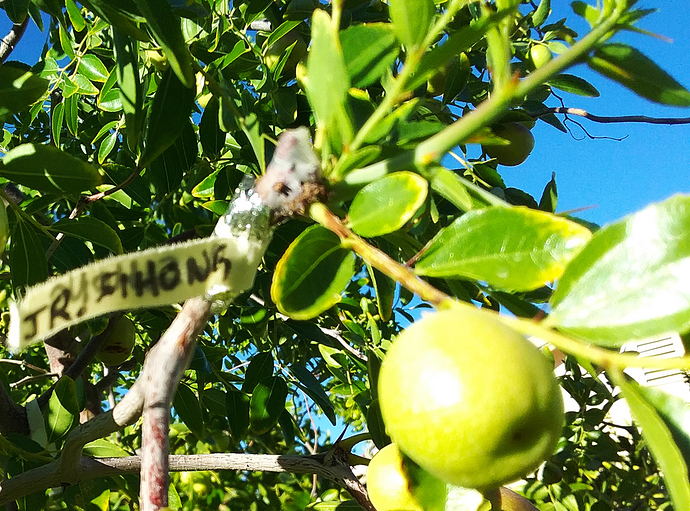 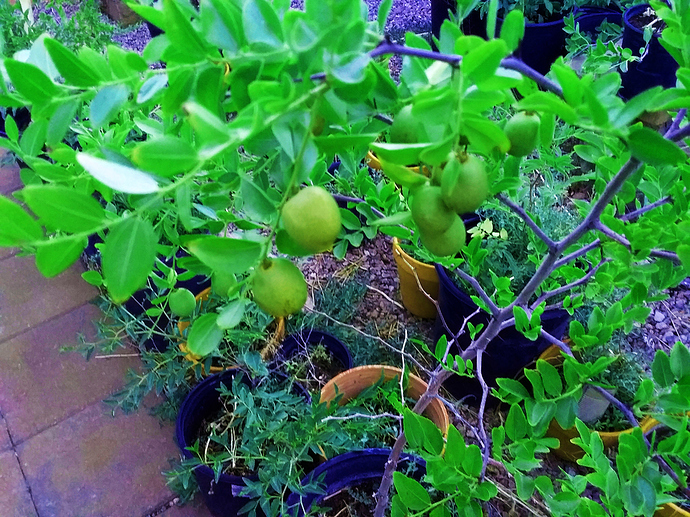 Here is a photo of a contorted seedling…Vegas bred/Texas born… it’s probably about done sizing up since it’s getting to creamy stage. 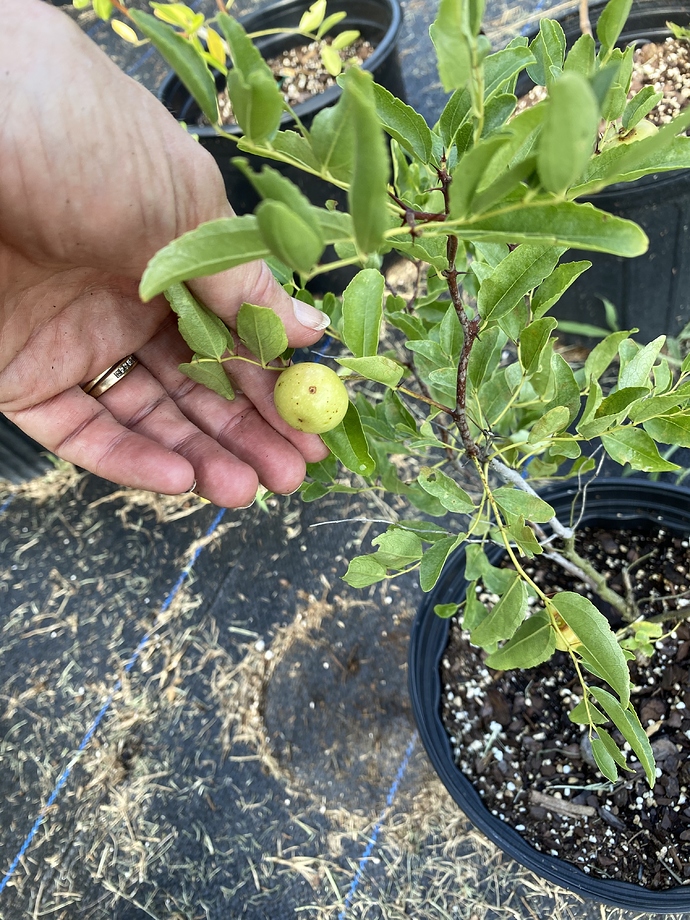