spell Xu Zhou and not Xu Thou

thou shalt not spell Xu zhou with thou

besides, Xu zhou has more pizzazz than Xu thou 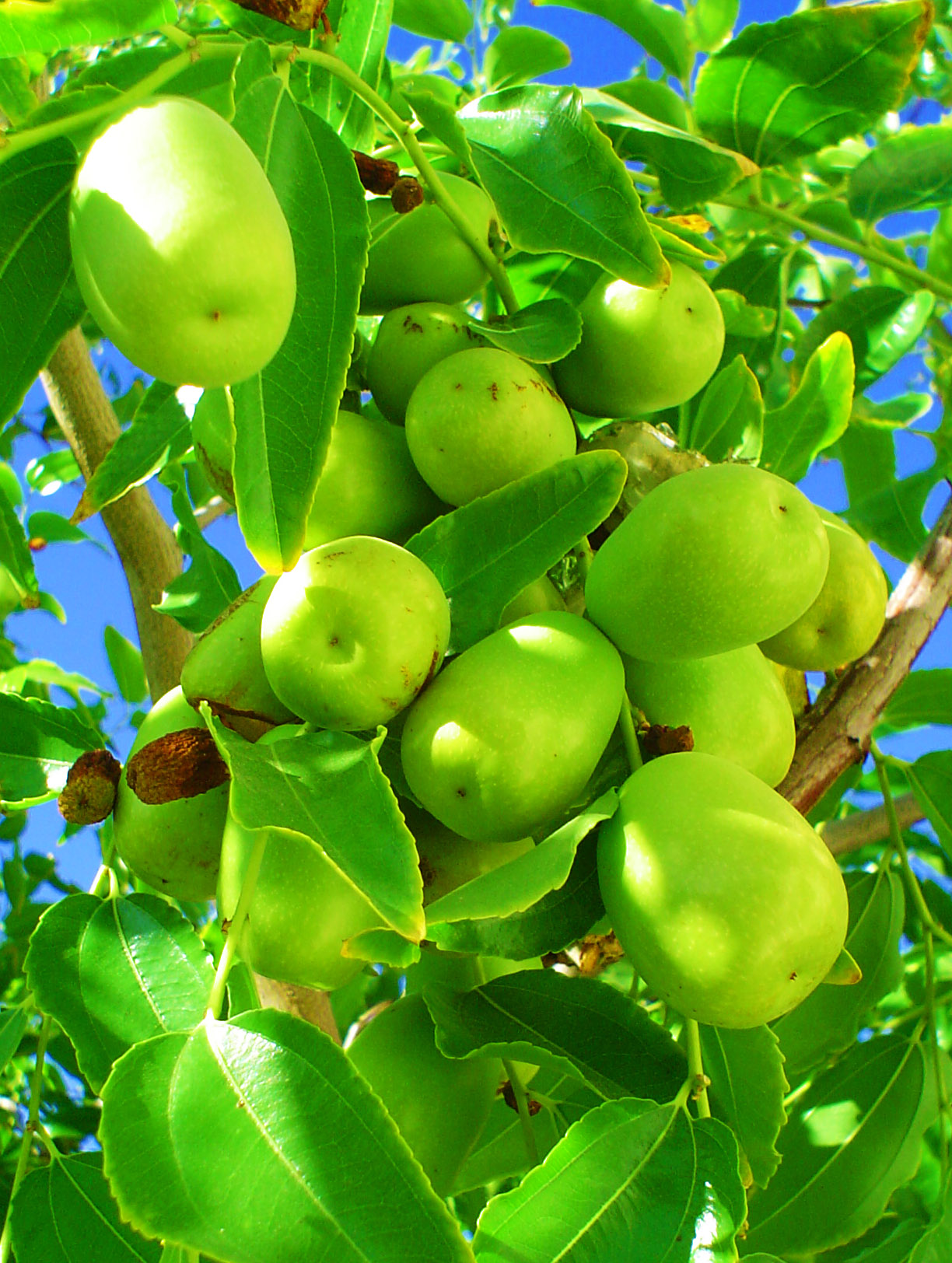 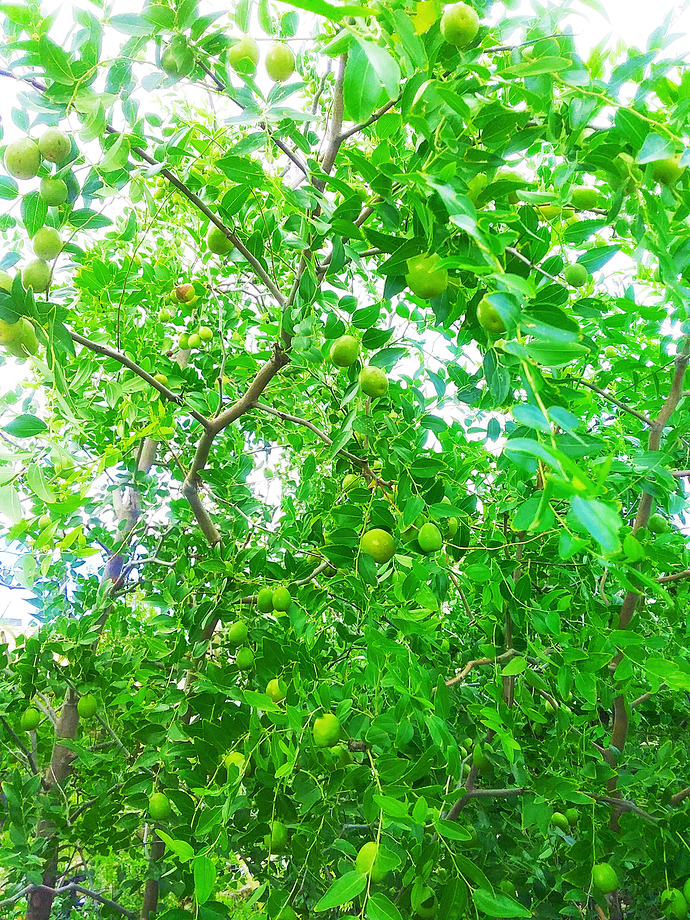 Xu zhou has more pizzazz than Xu thou

I thought my tree was loaded until I saw yours. However I do have a few of them. 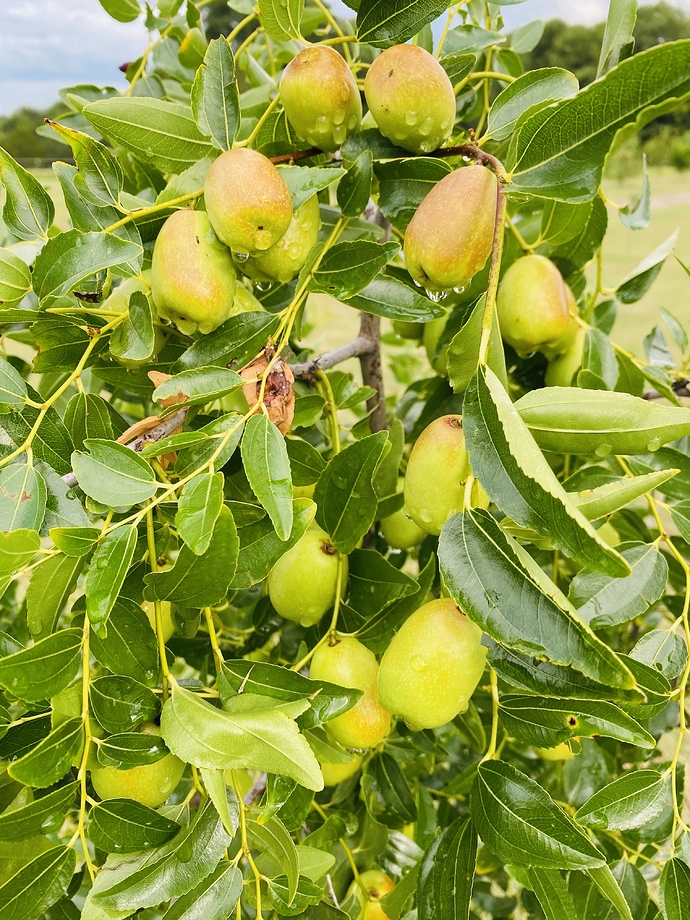 I can relate to that! I love this tread, would love some but no juju fruits here

It will get there… it’s hard to wait and then this year I haven’t had much fruit.

this is why i collect the same variety from different nurseries they seem to have the same name but the fruits are not exactly the same. what your experience?

how do they compare? taste wise? fruit size? Of they just very similar?

I only had OGW Contorted fruit last year. They were smaller than SC, but very tasty with a bit of tart to balance the sweet. Have not tasted Burnt Ridge or England’s Contorted fruit yet. 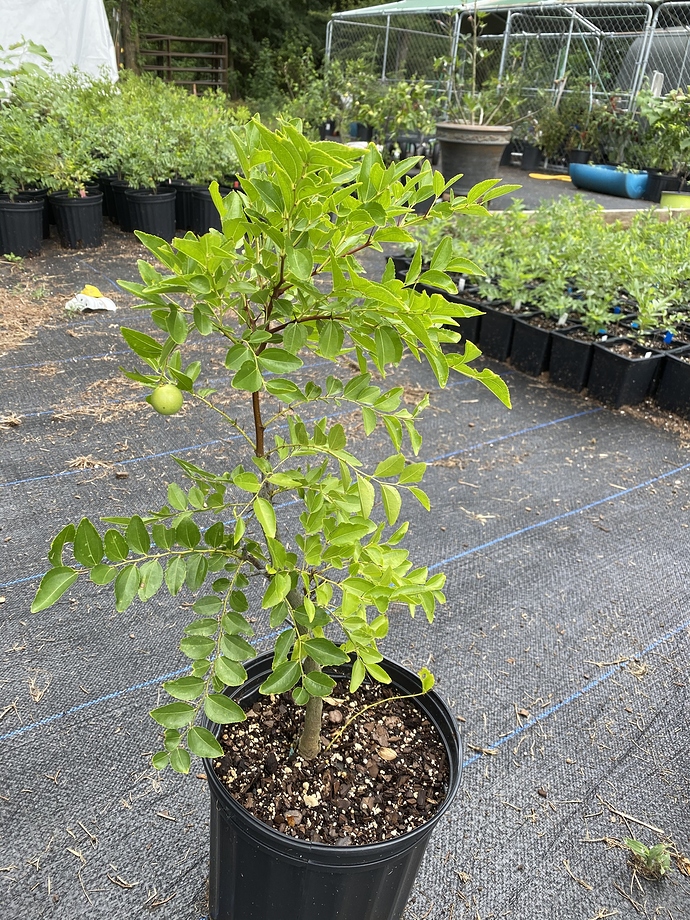 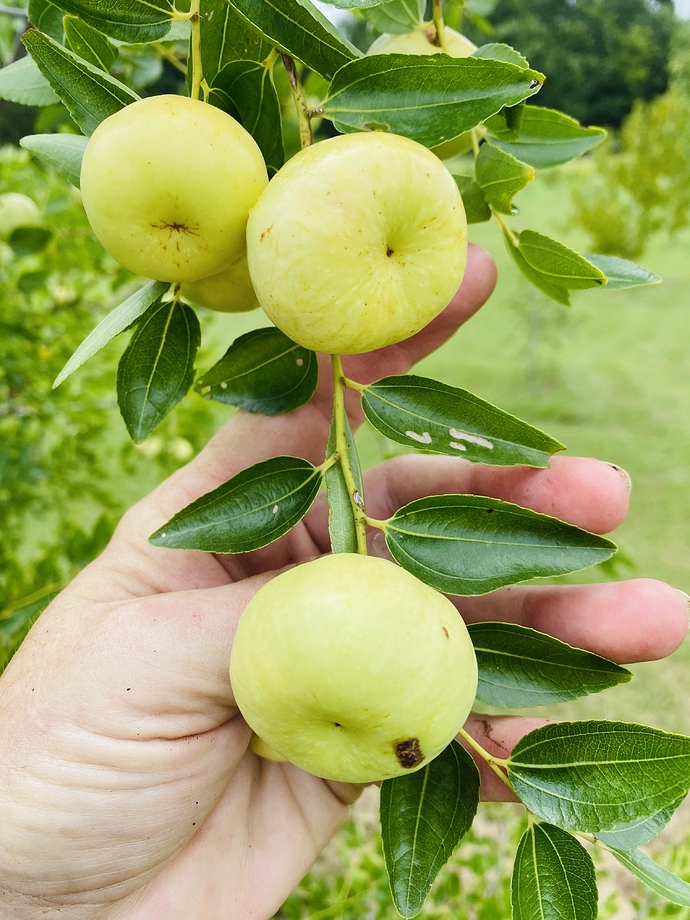 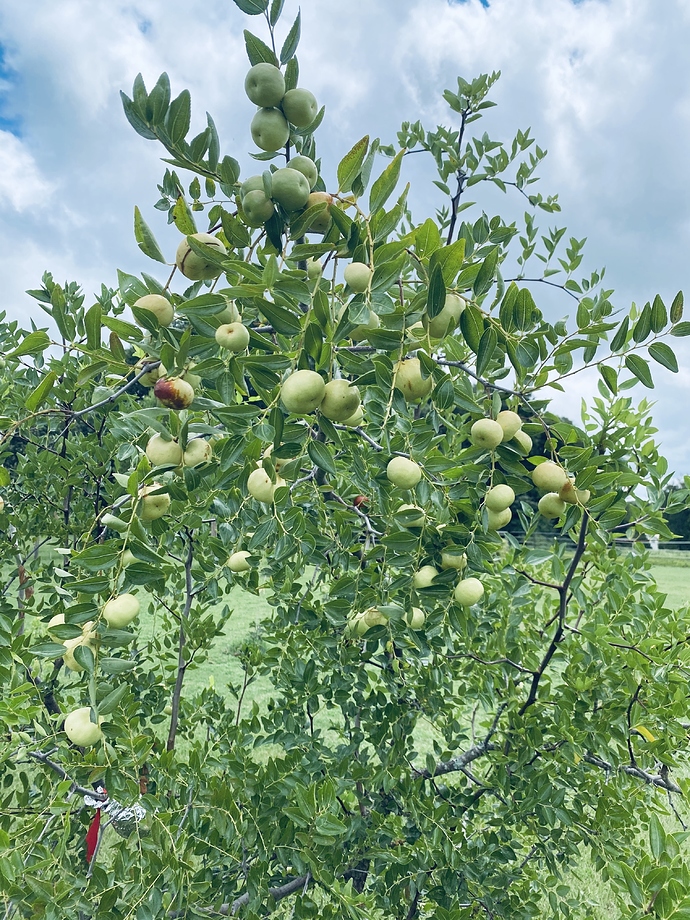 SiHong last year had lots of very small fruit. This year they seem to be sizing up much better 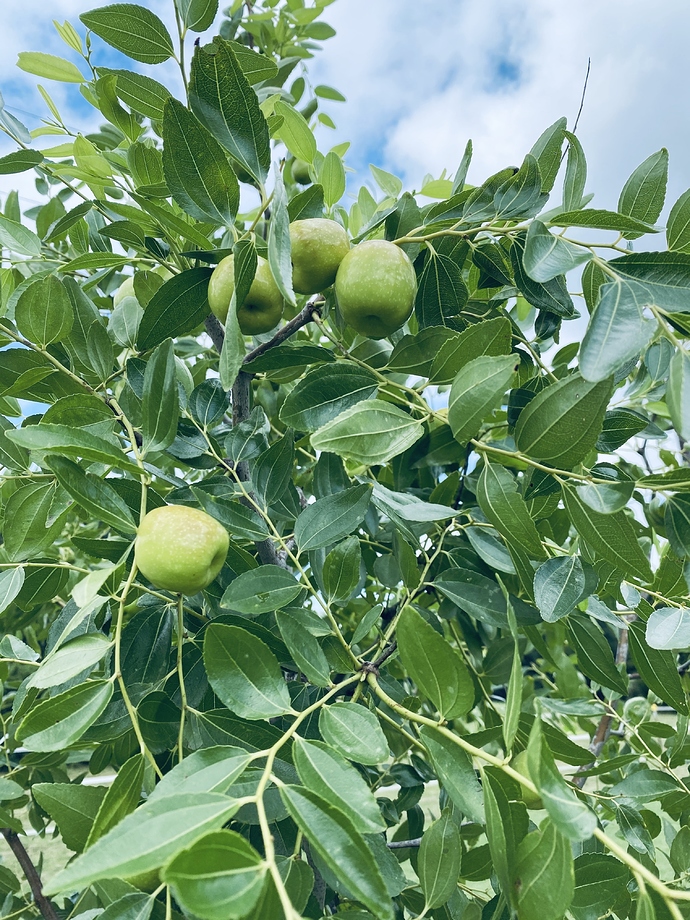 This I’ve been calling Texas Honey. This is the first seedling I grew from an unknown fruit obtained from Brenham Discount Trees where I bought my Chico. The fruit has been small and Honey Jar type. This is the first year it has had much fruit so maybe get a better evaluation. 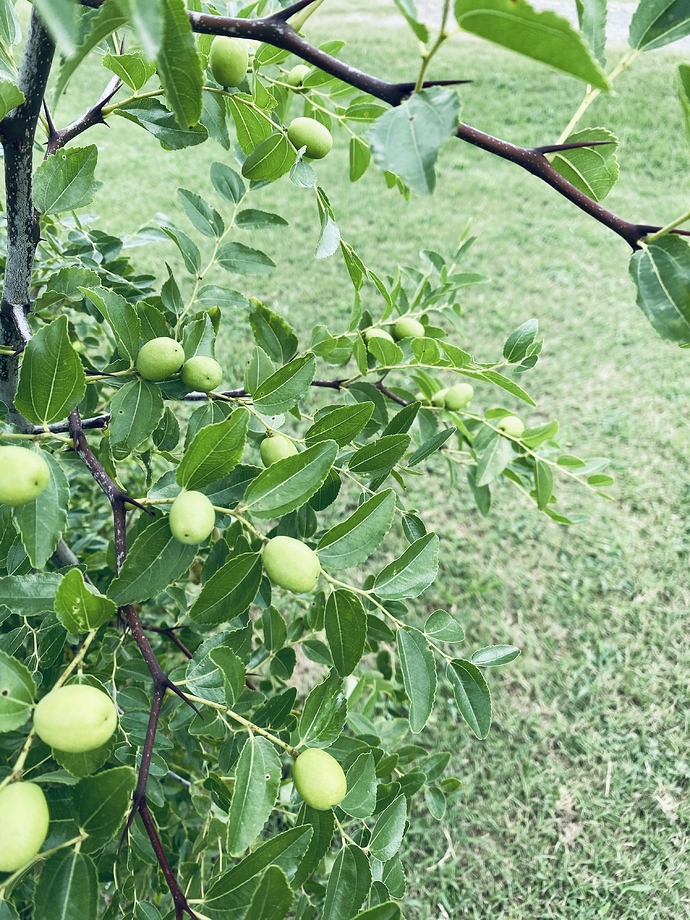 why i collect the same variety from different nurseries they seem to have the same name but the fruits are not exactly the same. what your experience?

i currently have two cultivars of contorted from different nurseries(plus several more that i grew from seed needing to have their fruit qualities assessed…), also have two different kinds of winter delight(supposedly mango dongzao), and also have possibly two different varieties of shanxi li

btw, between me and @k8tpayaso-- we likely have more cultivars of contorted than what all nurseries have, combined, since we grow ours from seed.

btw, between me and @k8tpayaso-- we likely have more cultivars of contorted than what all nurseries have, combined, since we grow ours from seed.

btw I got to taste another contorted seedling fruit today. Very small but also very small seed. Sweet/tart and crunchy. I have one more to ripen.

incidentally @Seattlefiggirl , below is winter delight from ogw. Yes, ogw messed up orders at least twice(autumn beauty, winter delight, and even massandra). While i can;t even ascertain if this potted winter delight is true to name, this specimen pretty much exonerates ogw for all the confusion they have caused.

as you can see it is potted, and has been potted for three years now, but the fruits are excellent. Hands down better than hj. More juicy, size is bigger overall(if fruit size was averaged), and sweeter than hj, considering that all of our hj’s we are grafted on full-sized trees havingh cooler, and quite likely, moister soil.
despite being grown in this pot that got toasted by several days of 110F and not getting much access to soil nutrients(other than what is in the pot), well, fruits of this so-called winter d already exceed hj in every dimension 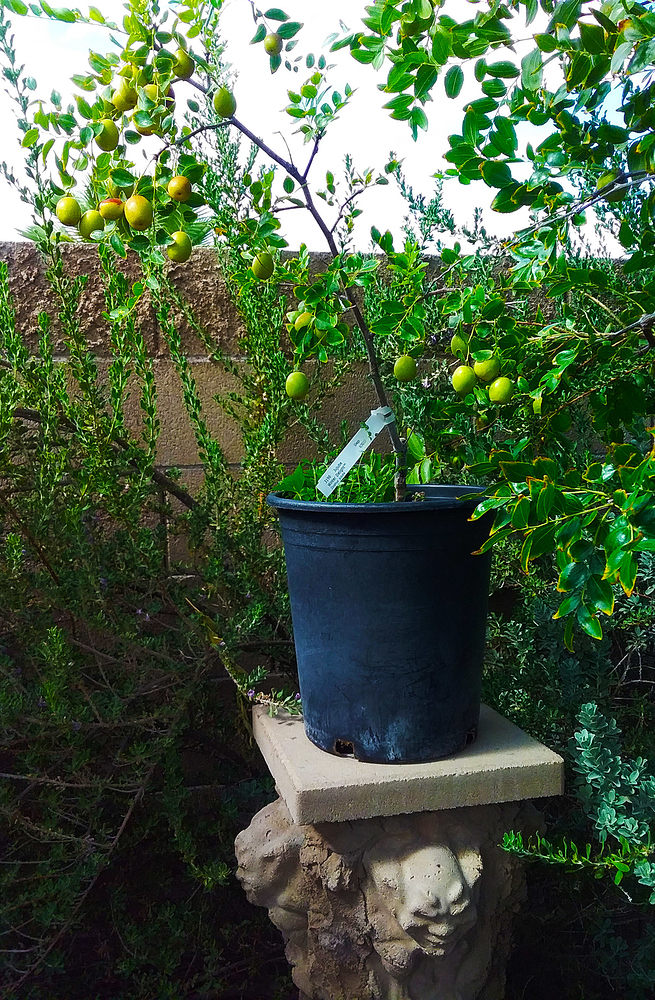 Raf, what is the size of your pot?

What is the oldest jujbe tree you have kept in pot?

Glad you say it looks like winter delight, but there are other winter d’s out there that have radically different fruit, like the one i obtained from jfae. Confusing right?

What matters to me now is that the winter d i have has excellent fruits despite the sparse, if not outright hostile, growing conditions it has been subjected to.

@mamuang i have several potted jujus from seed that have been potted > 4 or 5 yrs. The oldest i have that has gotten productive despite being pot-bound are v. booty and v. lucky. Grafted ones(mostly li) i have also had for more than 5 yrs. Many are productive while some are not, which may be credited to performance of rootstock. I also have several runty >5 yr old juju seedlings growing on tiny cans, some of which just started blooming this year which will post photos of.

Forgot to say, pot of ogw’s winter d is 3 gallons, and only 70% filled with soil

Since I have very limited sunny spots, growing jujubes in pots is a likely scenario.

My Burntridge So is a big disappointment. It is 4th leaf. I got a few, subparvfruit one year. No fruit last year or this year. The tree itself has sent shoots out from 3 out of 4 direction. It look lopeside. The contortion is not pronounce. I am likely to graft it over.

If Massandra fruit (also from Burntridge) still awful this year, it will be grafted over, too.

i would be happy with that mistake wrong label jujube but im a little particular so it would drive me nuts until i correctly identify a wrongly unknown plant. i dont know if i have collected a winter delight yet but im comparing some varieties to see which works best for my area.
i think autumn beauty should have more oval/squarish shape and winter delight round shape. but i havent confirm fruit from my source to confirm. hope i can provide some photos in fall of my ripe jujubes

pot of ogw’s winter d is 3 gallons, and only 70% filled with soil

i just checked the pot label @mamuang, it is a 5-gallon and not 3. Not sure if that means much. That winter d hasn’t grown much, in part due to poaching for giveaway scion wood, and partly due to the ‘cold shoulder’ have been giving it due to its dubious identity. I never really cared much for it until now, when noticed the “performer” that it is.

would be happy with that mistake wrong label jujube but im a little particular so it would drive me nuts until i correctly identify a wrongly unknown plant.

i know how that feels, as am particular about a lot of stuff myself! But a couple or so years ago had to give up as it is something that i have no control of. And with several other cultivars being sold out there that have the same name but presenting with radically different fruits-- everything automatically becomes anecdotal.
the most important thing to me now is that the fruits and the tree bearing the fruits have desirable traits. And the rather tiny “winter d” from ogw just proved itself to have so much of it in one little package. Main reason had to place it on a pedestal before taking a photo

so even though continue to think of its identity dubious, will simply just name it as “winter d from ogw circa 2018” lol

below is sugarcane. Fruits are similar in appearance to ogw’s winter d and coco, but the quality and attributes between the 3 are hardly similar 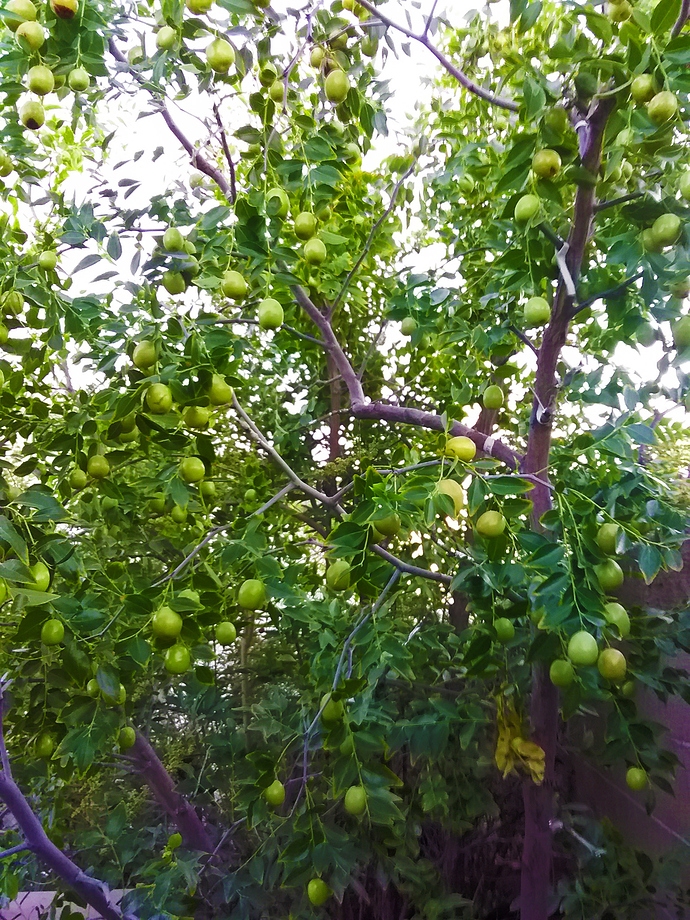 There are other winter d’s out there that have radically different fruit, like the one i obtained from jfae.

How was the Winter Delight (Mango Dong, per the label) from JFaE? I got one last year and it has about 20 fruit on it in year #2, which is very good for my region. Of the other 3 I got from JFaE at the same time (all on own roots), Honey Jar has almost as many fruit on it, Sugar Cane has 1 fruit, and Lang died (never came back after winter). The Mango Dong had some fruit on it in the box when I received it last year (which fell off pretty quick, due to the shipping and transplant stress), so it seems pretty precocious.

I also have a WD from OGW (2018) and another from Burnt Ridge (2019). But both are still quite small, as they started out as 1gal pots and take forever to size up. It might take them another 3-4 years to make anything…

I’ve heard that Coco isn’t a strong producer. It has so far lived up to that reputation with me. It has a single fruit this year. It has also adopted a very strange growth habit. It is 2-3 feet tall and 6+ feet wide, with several long branches growing parallel to the ground, then sending growth up. I’ve thought about pruning them so that they don’t go more than ~2" tall and making it into a big groundcover…Anyone ever had a jujube with that growth pattern? If so, did it ever get productive?