I dug up some volunteer Mulberries from the garden, and cut some scions yesterday off tge neighbor’s delicious black mulberry. I wish I had taken a picture of the tree, vas its an interedting thing. It’s probably nine feet tall, and has a very tall trunk. The graft union is probably over five feet up, and obvious because the diameter is substantially greater above the graft. (Restrictive rootstock?)

Can I benchgraft onto totally dormant stock, and then plant them out, or should I wait until they start to wake up? (Plant them and graft later)
Someone said dormant graft is best. I’m just wanting clarity on what that means.

I am super looking forward to this. Those berries rival raspberries for flavor, without raspberry seeds and thorns!

Dormant mulberry grafts will not work which I found out the hard way. If you wait until the rootstock pushes growth and then graft dormant scions you will have some success. See this old post Che, mulberry, osage orange, fig grafting

I think some heat might help, and agree with Clark to at least wait until the buds are swelling. I used veneer grafts last year with mulbs and they worked out fine. Wrapped entire scion in parafilm. Mine didn’t seem to take a quickly as other species I benchgraft. Good luck!

Do you really need to graft mulberry? I think they are one of the easiest plants to propagate by cuttings. 2 years ago we cut some big branches of our mulberry tree and kept them in upright position with a support of another big tree. We had no intention to grow them but just kept them in one corner so that when they dry up, it can be used as mulch or some other use. Monsoon started after 1 month and within couple of weeks all the branches got sprouts and now, they are still lying in the same position but have grown up lot of branches. Their bottom part was barely touching the soil, so still they managed to root. So, i think you should be able to root those cuttings very easily.

I could try rooting them, but the new growth on this tree is short, only a few inches, and I have heard some mulberry are easier then others to root.
I really don’t think those little peices would have enough energy to grow roots and leaves. (but I could be wrong)

I ended up waiting until my hilled in and abused volunteer mulberry rootstocks started pushing, then I did a few grafts.

Because I had nothing to lose I did a double scion cleft on a thick section of wood with root, a single scion each on a smaller forked stock with root (figured I could separate them later) and then I did two w&t grafts onto root pieces, wrapping the graft union and planting the graft below the soil line, and lastly I cleft grafted a scion onto a piece of wood I had cut off doing the other grafts, wrapped with parafilm everything I left above ground, and planted a grafted cutting.

I had a nice little root sucker growing in another location where the sheep killed a Pakistan Mulberry, and I did a cleft graft on that too. It was not dug up or abused, and at this point it is the only graft NOT growing.

My experimental root grafts look successful, and even the grafted cutting is pushing the bud right above the graft.

I guess trying something new is paying off.
I will try and post a picture soon.

It will be interesting to see those root graft unions when we dig them up this winter!

Here are pictures of my Black Mulberry grafts. Just thought I’d share the experiment, and results.

This is the single trunk (with 2 scions) and double trunk (single cleft on each side) on rootstock. The big one has two mulberries on it. 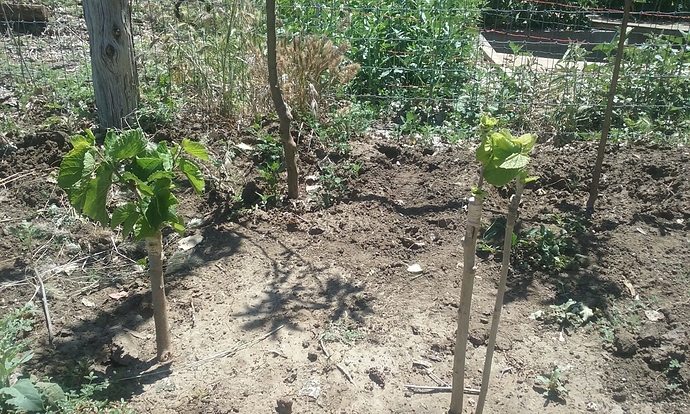 This is a root graft. The scion is completely wrapped with parafilm, even below the soil line. It looks like a success to me. 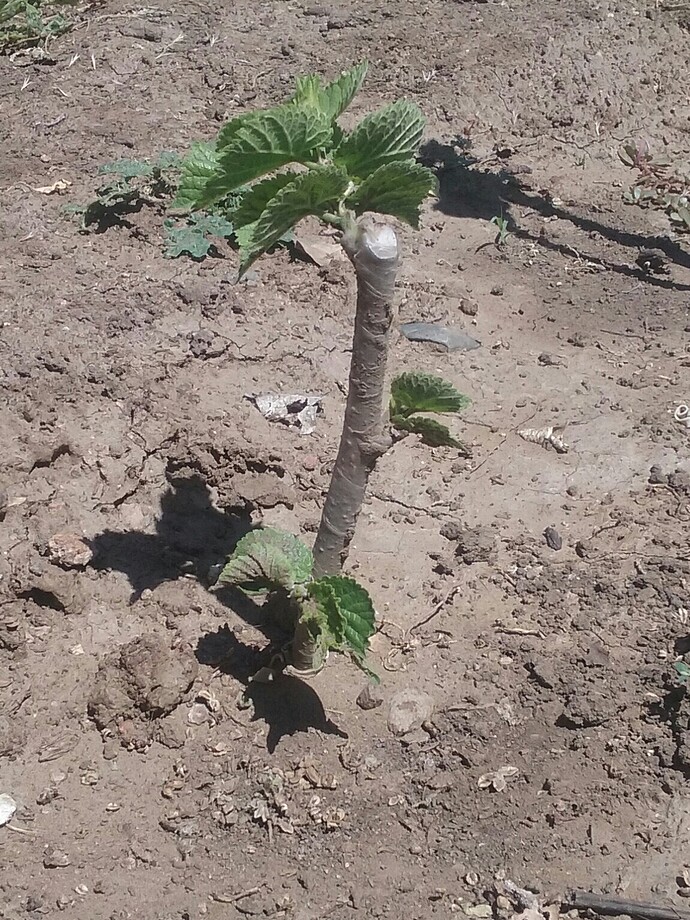 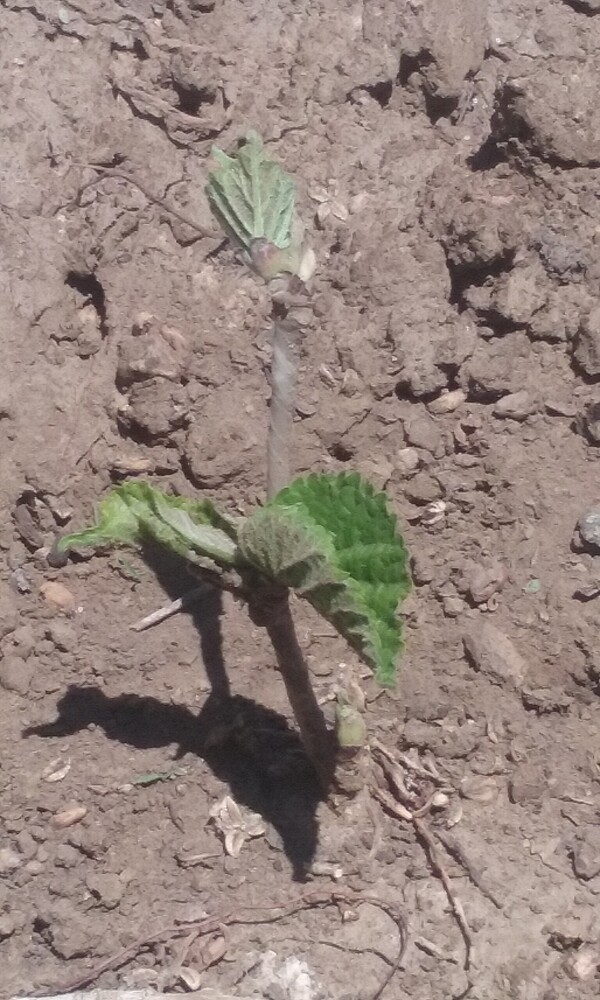 And this is too early to call a success, but the bud just slightly above the cleft graft is pushing on the grafted stick of wood that had zero roots when planted. I wrapped with parafilm everything above ground, and put half the wood or so in the ground. I won’t hold my breath on this one. Lol 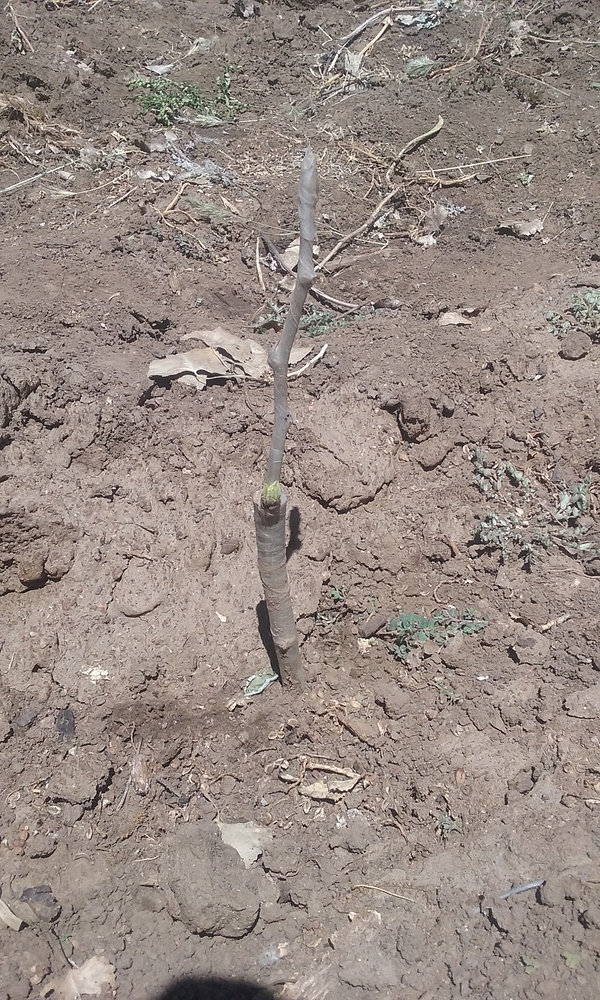 Way to go joleneakamama! I did nine dormant root grafts this spring…only two took (my success rate on normal grafting is at least 80%). I was ready to claim that root grafts don’t work for mulberry…Thank you for proving me wrong. In my defense though (if stupidity is allowed), I was attempting to use four to six inch pieces of root.

I don’t remember the length very well, but the thinner one was probably only 6-8 inches, the other one was thick, and may have been over a foot long.
I did do them all when it was warm enough for the Mulberry stock to be pushing leaves.

I had no expectations though, as the roots felt like withered carrots, and there wasn’t a cambium layer like there is on the wood that I could identify.
I’m going to try sweating the other graft, that is just sitting there, and see if it helps. The stock is still pushing stuff under the graft. Getting it hot and hydrated might help.

strong work! And the foliage, even though tiny, are bonafide nigras

And that is why the Mulberry grafting project was one I was very excited about. I tasted the berries off the tree I got those scions from, and they were outstanding! They rival raspberries for flavor without all the seeds and thorns.

They were very staining, and very tasty! I thought the Black Mulberry description fit this tree.

without all the seeds and thorns.

exactly! Btw, when you say the source of your scions is a tree, how big is the tree canopy( i just read it is ~9feet tall, but curious about width of canopy)? Are you in So Cal?
you don’t have to answer all my questions. Admittedly nosy due to the intriguing provenance of your successful endeavor

obvious because the diameter is substantially greater above the graft. (Restrictive rootstock?)

evidently the norm for nigras on albas. Maybe albas seem to channel sap in greater amounts than nigras, so perhaps no need to be of equal caliper with the nigra graft.

similar scenario for our trees here Purple reign - #70 by jujubemulberry

I’m in zone 8 Arizona, in the mountains by Prescott. Hubby says the tree is probably taller then I said, and about ten feet wide.
The odd thing was maybe five foot high graft union, that was thicker then the trunk.

The tree looked like it was often freeze damaged. I’m thinking about sharing trees with my family in Phoenix, but I’ll bet their neighbors would hate me.

Questions are always welcome. This forum has been such a blessing, and encouragement to me…I’m just paying it back, and forward, as I can.

10 feet wide is HUGE in nigra terms(in usa). Your neighbor is a lucky fellow(or a proactive one who started early).

about sharing trees with my family in Phoenix

may well do that without your neighbor complaining about you taking too many branches . A 10 ft wide canopy should be producing a whole lot more berries than your neighbors actually need.

I’ll bet their neighbors would hate me.

if tracked indoors and on light-colored carpet, then yes, their neighbors might complain! On concrete, the stains may linger for a while but disappear after a few months.

These grafts look fantastic, thanks for sharing!