Mulberry: the king of tree fruits (for pigs)

that’s the best news have heard today @thecityman . Strong work! The provenance of that tree has your signature all over it

Thanks raf, I must admit I feel pretty good about it myself!!!

BTW…my Honey Jar and Sugar Cane jujubes are absolutely LOADED with tiny fruit this year and the trees have grown to be quite large for 3rd leaf trees. So thanks to your encouragement, it looks like I’m going to have a LOT of jujubes this year!!!

I just ate a nice handful of Kokuso. They were big due to the recent rain but retain the real sweet and tasty fruits. They toped the Oscar and Girardi this timr with perfect ripeness. Wow!

Whew! Those are some big mulberries!

Someday I really wish I could figure out what the so-called Black Beauty mulberry is that I bought from willis orchards. ABout all I know is that it IS NOT a black beauty. It really bugs me that to this day they sell that same tree as Black Beauty even though when I reported it as not being one and not having even similar characteristics, the girl I talked to said “we get that all the time”. Anyone can make a mistake I guess, but when you get many reports and continue to misrepresent a tree, it really says a lot about your company.

I bring it up because the ones on my tree aren’t even 1/2 the size of yours and are about 1/2 the size of those on the tree I saved, but don’t taste as good. Also, I never could find a graft bump or signs of a graft, so I’m fairly sure its just a seedling. And not anything special. Shame on them!

Black Beauty that I bought that wasn’t BB was Issai. Or that is what I was told when the mix up was corrected.

was that from Willis?

No, I bought from Burnt Ridge and at the end of the day they said basically they had been sold the plants as BB but they were actually Issai and sent me a real Black Beauty.

Awesome! This is some wonderful work there. I hope we can all learn from your experience and success.

How is your Black Beauty mulberry doing now? I’m in Year 3 (or 2) with a tree from Dave Wilson nursery and so far I’ve gotten tiny tiny fruit that is more sour than sweet even when dark. The tree is beautiful and about 4 feet high, but I’m wondering if I should pull it out and put in a female Persian mulberry which is what I was hoping Black beauty would taste like. Any thoughts?

hi @bonitapplebump. There are no discernible differences between black beauty and standard persians, taste-wise. Both are excellent and couldn’t really tell them apart. Only difference noticeable was that black beauty mulbs will develop both cordate foliage and lobed foliage(fig-like in conformation), whereas those of persians are almost exclusively simple, cordate leaves.

I’m in Year 3 (or 2) with a tree from Dave Wilson nursery and so far I’ve gotten tiny tiny fruit that is more sour than sweet even when dark.

our black beauty mulberries were obtained as recently-grafted sticks about 9" tall, and even though precocious enough to produce berries on the same year i obtained them, the berries either fell off at green or red stage, and were sour at the dark stage. It was only after 3 or 4 years waiting when the berries begin attaining the excellent characteristics and adjectives posted by nurseries selling them.

mature, seasoned nigra mulbs will have off-years as well. This year the berries were more sour than sweet, which i blame on weird weather patterns during first 2 quarters of 2019.

btw, would you have a photo of your black beauty you can post? If it is 4 ft tall and grafted low, it is likely to be having an off-year as well, and younger trees tend to have off-yrs more often. I’d hate for you to replace it just because.

That makes a lot of sense. Our berries also fell off at green/red stage and incredibly sour even when black.

Here are some photos.I removed the lower branching because I want to make it a small tree and I think I’ll be pruning a bit this month. Is 4 feet too high for a 2 year old tree? Is that how you’re able to determine that it is an off year because the tree is growing a lot? 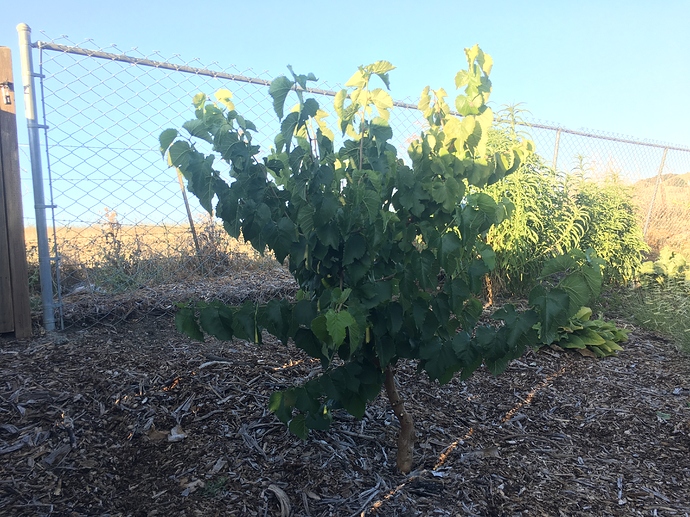 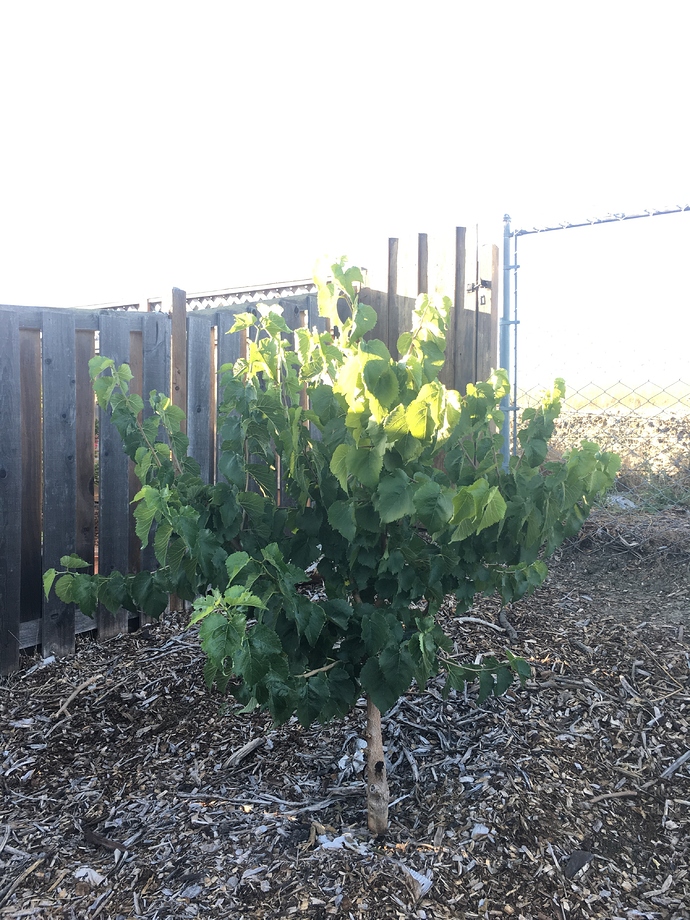 Do you think it would be possible to graft Noir Spain onto a black beauty?

Is that how you’re able to determine that it is an off year because the tree is growing a lot?

not necessarily, as poor production can be weather-related. However, plenty of moisture and nitrogen can also affect production. I don’t fertilize our mulberries, and don’t have data, but will wager that low nitrogen fertilizers with relatively high phospate and potash would encourage berry production

I’ll be pruning a bit this month.

unless one is getting bumper crops of nigra berries that wouldn’t know what to do with, i wouldn’t prune nigra’s, since we want our trees to have seasoned wood. The older the wood, the more likely for subsequent stems/buds to bear good berries. Here in vegas, our nigra’s stems grow 4" to 6" per year, developing short, tortuous/gnarly stems. Growth may be painstakingly slow, but it seems to have an inverse relationship with quality of berries produced. As the short gnarly stems also tend to produce fat buds(often thicker than the stems they are borne on), and such buds are more likely to produce excellent berries than berries coming from buds which were thinner–relative to the stems that they have developed from. With nigras, bud thickness vs. stem thickness is predictive of the quality of berries that will be produced. And it is from older wood which gnarly/nody stems develop from(ultimately), that prime berries are likely to be borne

Do you think it would be possible to graft Noir Spain onto a black beauty?

they are both of the nigra species, so the answer is a resounding yes-- considering that nigras can even be grafted to alba species, which is likely to be the rootstock your black beauty was grafted on.

incidentally, noir’s also exhibit leaf-form variability where we are at.

It was bareroot when we put it in, but the rootstock was healthy then too. It was about 2 feet of trunk bareroot and then branched out laterally more than horizontal. This year the lateral width is about the same and the height has doubled.

I also don’t fertilize any of the non-citrus fruit trees because I have found that once the tree starts fruiting, I have no problem getting fruit. Maybe I will try fertilizer for this tree, however.

Ok definitely no pruning. Thank you for explaining this.

This is a novice question, but is there such a thing as 1 graft overpowering another? I was reading that Noir Spain is a 30 foot tree. So if I were to graft this onto my root early next year, would I risk it taking too much energy and stunting the Black Beauty because its a standard?

i haven’t tried that yet, maybe others can answer this question. Some taxonomists identify paks as Morus macroura, while others dub it M. alba. Regardless of nomenclature, it is supposedly closely-related to other albas(and considering the geographical proximity of pakistan to middle east), i can bet my bottom dollar they are compatible. Nigra’s are compatible with alba’s native to china, so pakistan being so much closer would indicate it would be at least as closely related to nigra’s as alba’s are.

i did graft a couple of pak onto a noir nigra in feb this year(when paks were already leafing out), and neither of them took. Failure was likely unsatisfactory technique, but also likely to our unusually long winter, resulting in nigra sap taking forever to start flowing(as a result of protracted cold weather). Since you brought it up, will try to graft nigra this year onto pak, and vice-versa, when am sure both interstems are still flowing with sap. Hopefully at least one for each permutation will take despite the extreme heat we’ve been having lately.

possible for me to obtain large Pakistan mulberry trees. I wonder if I can use them as rootstock to accelerate the growth of a Nigra.

here, paks grow just as fast as the generic alba’s(russian/chinese rootstock types), so not sure if it will accelerate growth. Btw, nigra’s will grow fast in shady conditions and good irrigation, but unfortunately will not accelerate ‘seasoning’ of wood. Interstems will be longer, and buds will be tiny relative to girth of stems, which equates to poor berries and low berry output relative to unit length of stem. Unlike precocious fruit species (like jujubes), beheading an old alba tree with an enormous trunk caliper and bark-grafting with nigra will result in fast nigra growth(about 2 feet in one year, even in full-sun conditions here in las vegas), but this is more of a physiological response to the large rootball, relative to the few nigra buds grafted to it, so the early nigra growth tends to be more vegetative in function than fruit-bearing in function.

is a novice question, but is there such a thing as 1 graft overpowering another? I was reading that Noir Spain is a 30 foot tree. So if I were to graft this onto my root early next year, would I risk it taking too much energy and stunting the Black Beauty because its a standard?

nigras have long gestation periods, and live for hundreds of years, so many of us yanks are novices, considering it was merely imported to the americas relatively recently, and virtually all as grafts to alba rootstock. Noirs and persians will grow 30 feet, you bet, but probably not the trees am growing—for what’s left of my projected lifespan! Black beauty nigra’s don’t grow any faster or slower than noirs or persians, so will probably attain 30 feet or taller as well. What some nurseries sell as ‘dwarf black beauty mulberries’ are nothing more than a black beauty cultivar grafted low to an alba rootstock. A noir or persian grafted low will have the same rate of growth as the black beauty, all things being equal. As for grafts overpowering others, it will depend on vigor of rootstock and location of the grafts and species of grafts. Safe to say that an alba graft will be ‘prioritized’ by an alba rootstock over a nigra graft. I don’t see a noir being any better or worse than a persian or black beauty grafted on the same rootstock, other than location of respective grafts(amount of sunlight the grafts will be getting).

incidentally, folks across the atlantic have centenarian nigra’s, and i personally defer to. Check out @Carld 's nigra posts here . Nigra’s are old world natives, and can grow from seed, so possible some of these 30 ft tall trees are on own roots and have uniquely individual growth habits

LE Cooke’s Pakistani mulberry can you please tell me where you bought this variety online? it seems many place offer pakistani but not the LE cooke thank you