My mulberry and other fruits collection

Damn lost 4 Mulberry trees planted this year, something completely eaten the root ball of them. All I had left were the bottom of the trunk with the wood completely eaten and girdled. What could it be?
I am in Portugal, so some type of European vole or something like that.
Any idea @Luisport???

Toupeiras or rats. I loose one or two every year.

There are loads of toupeiras mounds in the orchard. Must be them… I thought they were carnivorous and ate worms @Luisport

They eat the roots too.

Trying to propagate some of my grafted mulberries on their own roots.
. Airlayering the Pakistan Mulberry, I have like 10 airlayers on the tree 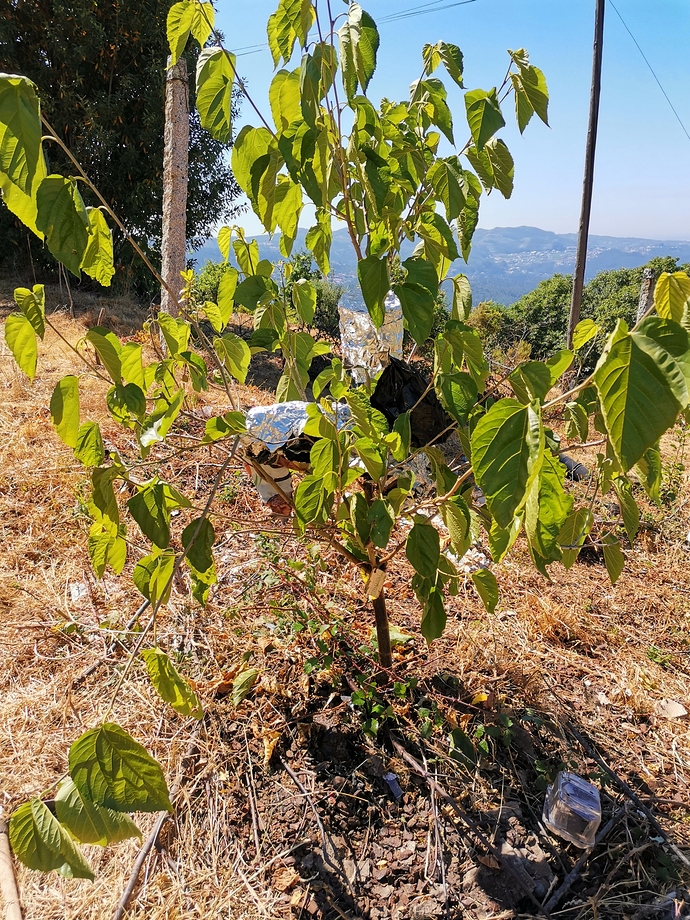 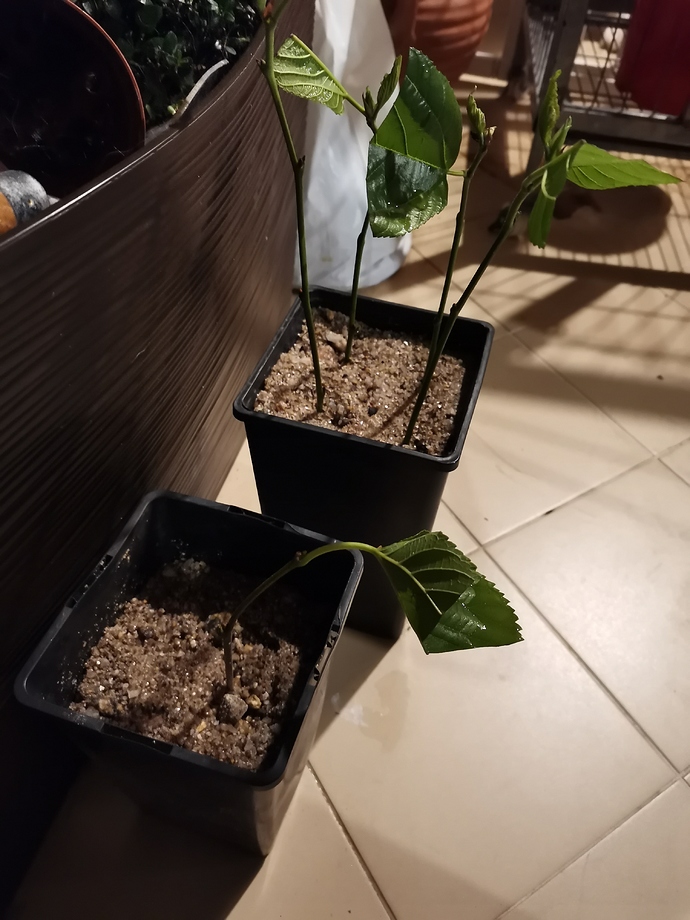 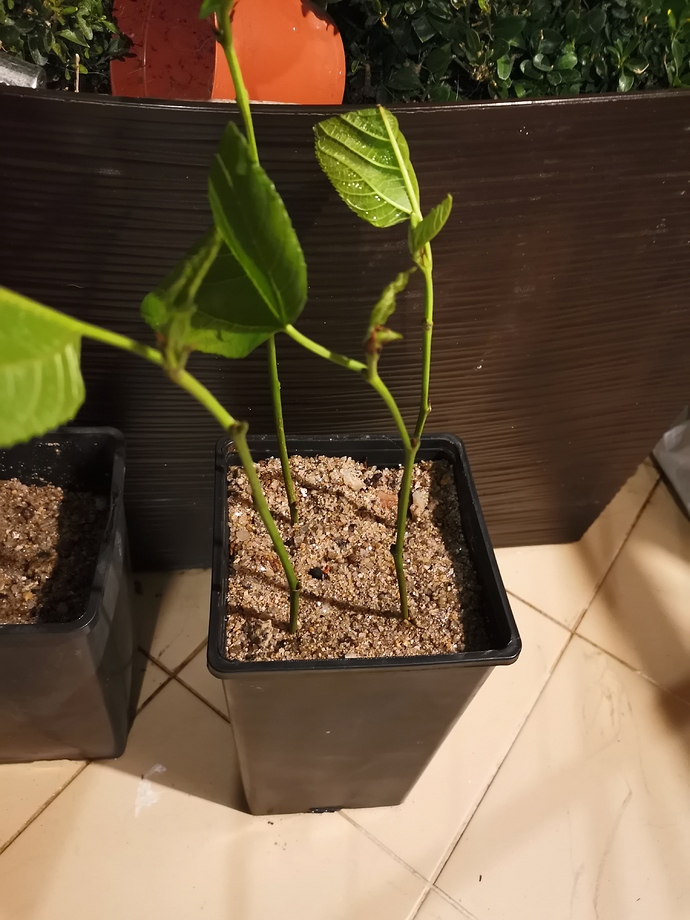 I have failed in the past rooting either green cuttings or hardwood cuttings of these cultivars and others in several rooting mediums (perlite, soil, etc), trying river sand now and softwood cuttings.
The only cultivars I found easy to root in any medium are Shangri LA and Oscar.

Dammmn found some more dead Mulberry trees planted this year.
What ever vermin was it it ate the entire root ball… Only the stick of the tree was left with the bottom all gnarled away.
You still think it was toupeiras @Luisport? 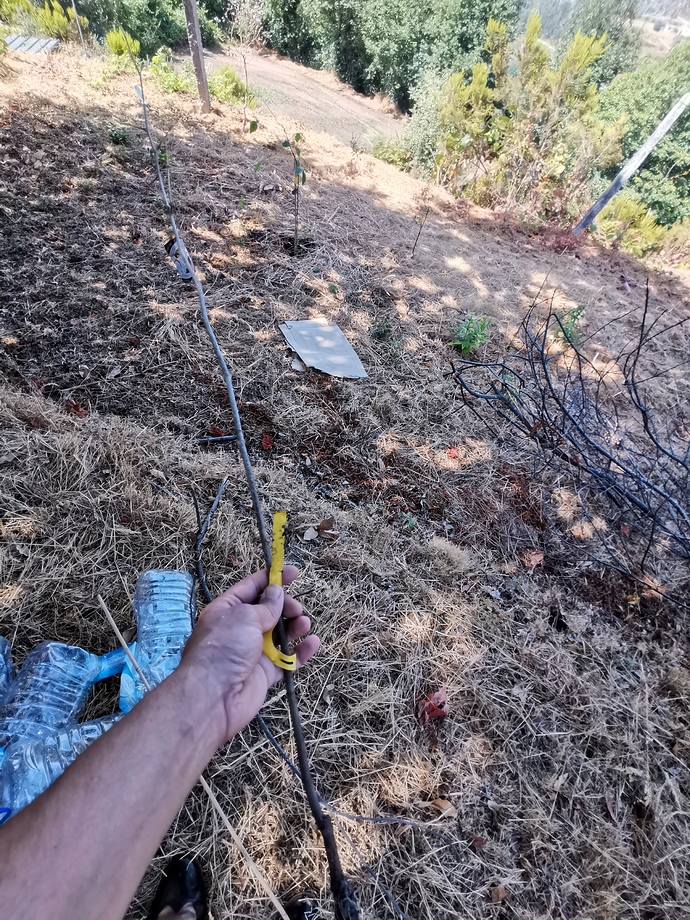 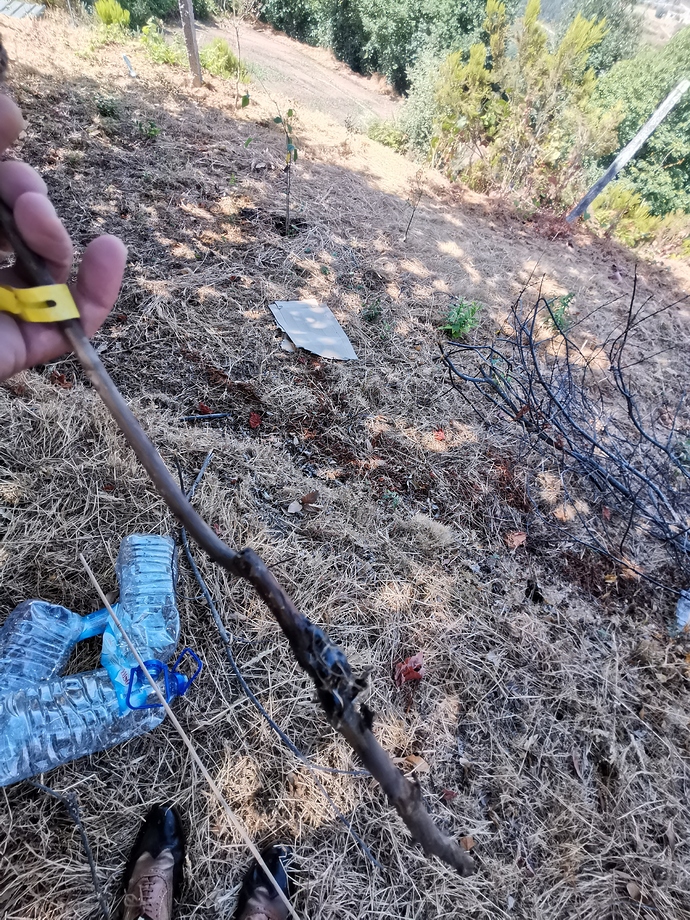 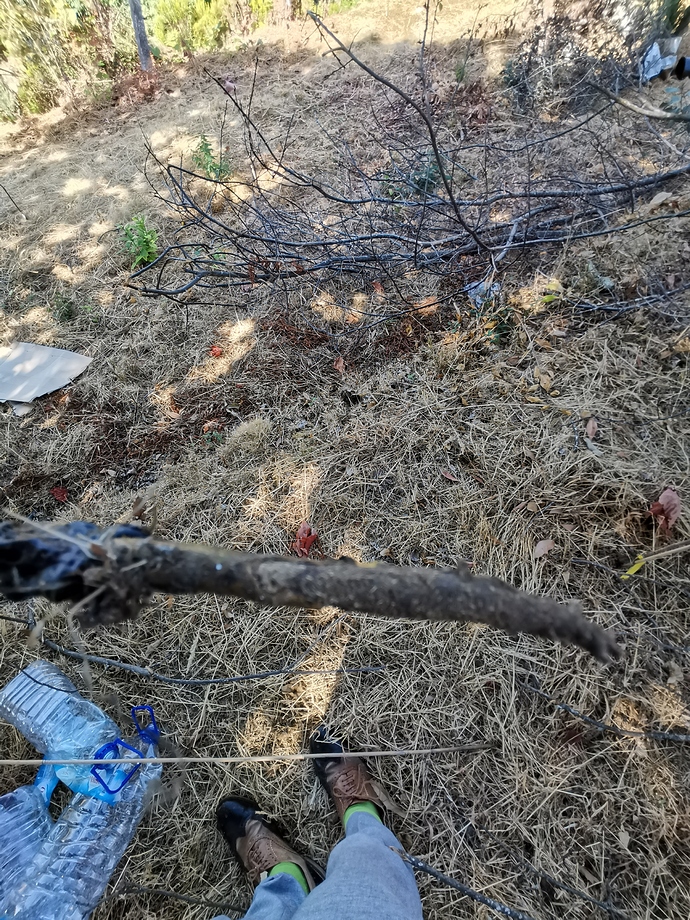 On the other hand I am sorting my water problems. Remember the old Portuguese style stone water tank I had which was leaking water… Now sorted. Gonna fill it up 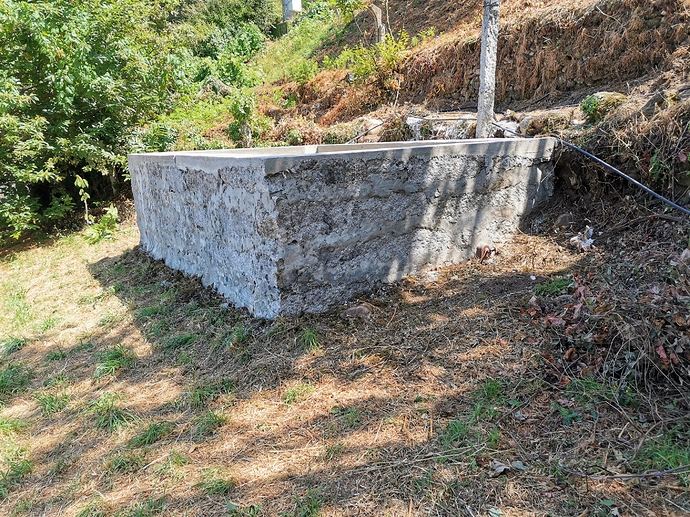 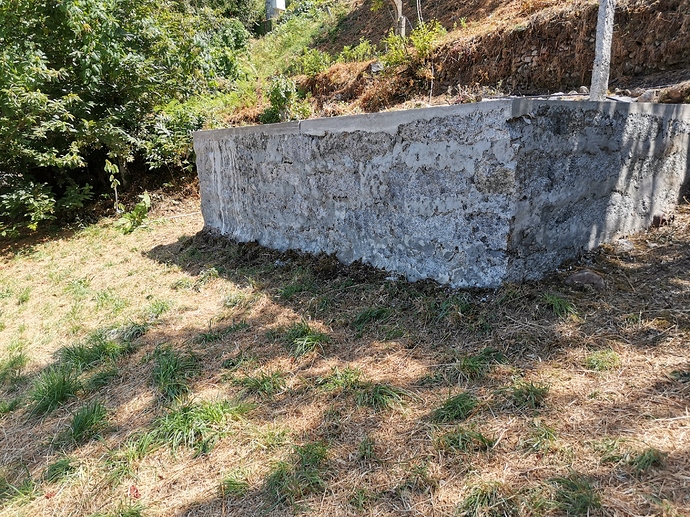 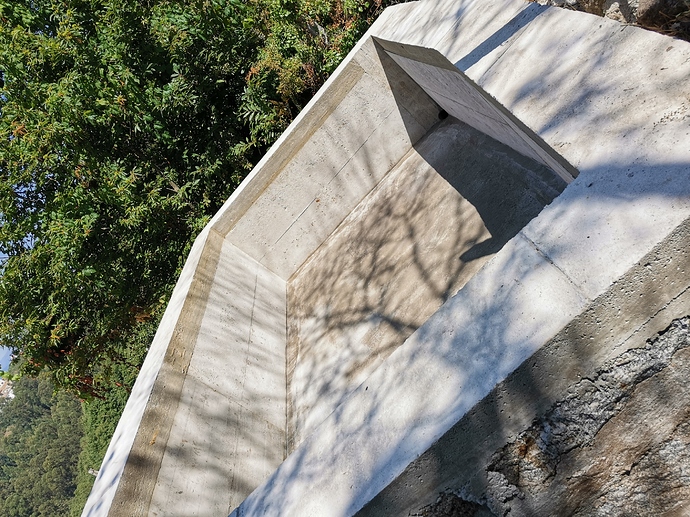 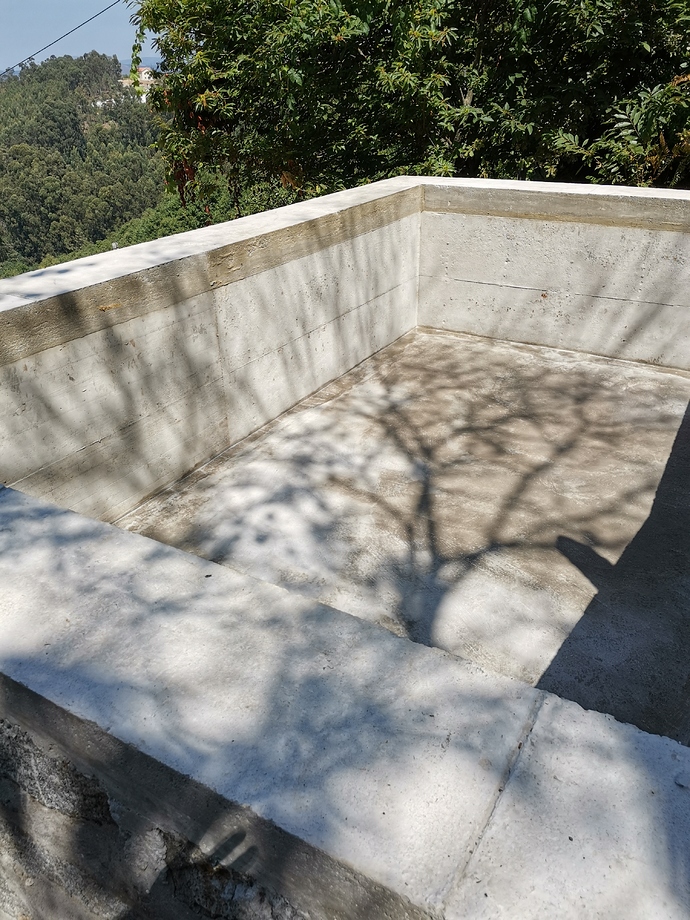 Hello my friend! Infortunately i think it’s the toupeiras. Today they cut another passiflora plant! I just pray they don’t kill more plants or trees…

Damn, they are eating away my Mulberry trees

Yah I shall do that

Please tell me what they say…

My bistrica Mulberry I thought was dead from the drout/dry summer and lack of more regular watering but it’s sprouting above the graft. 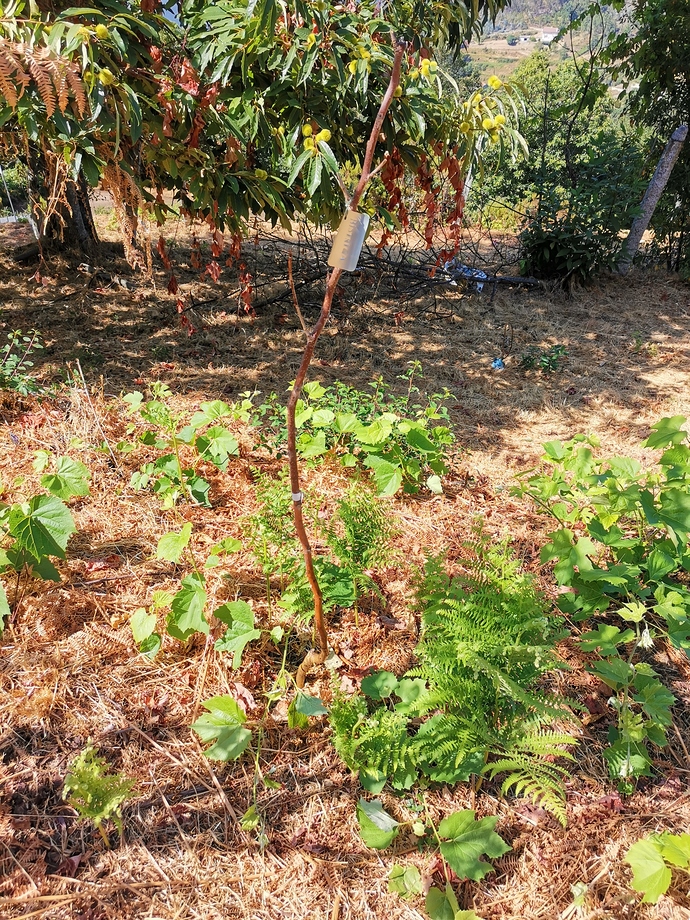 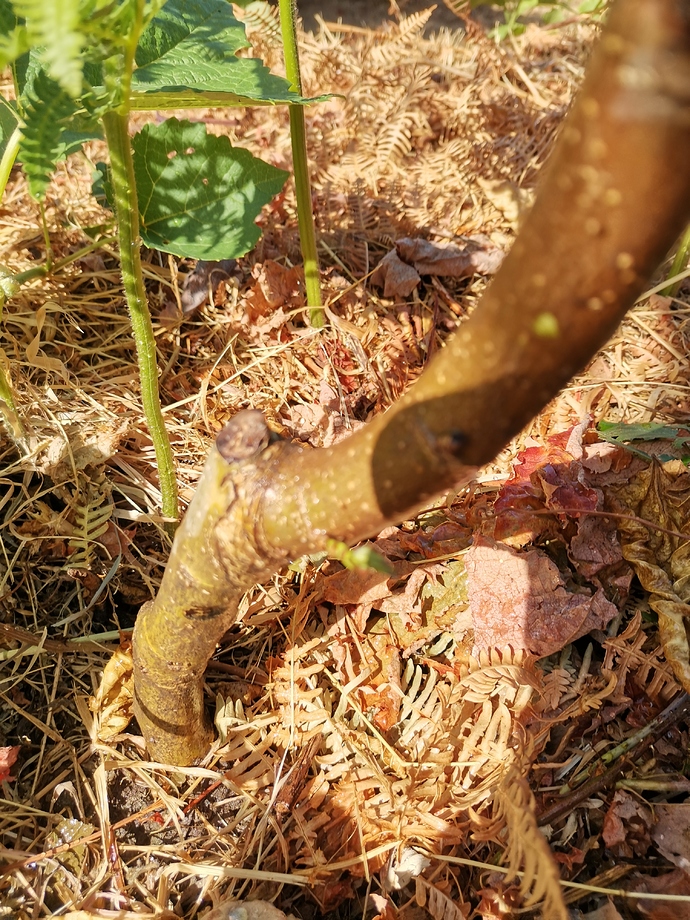 My pink Moldovan died… It’s sprouting also but under the graft, so it’s not the cultivar but I’ll let it grown to maybe graft in the future 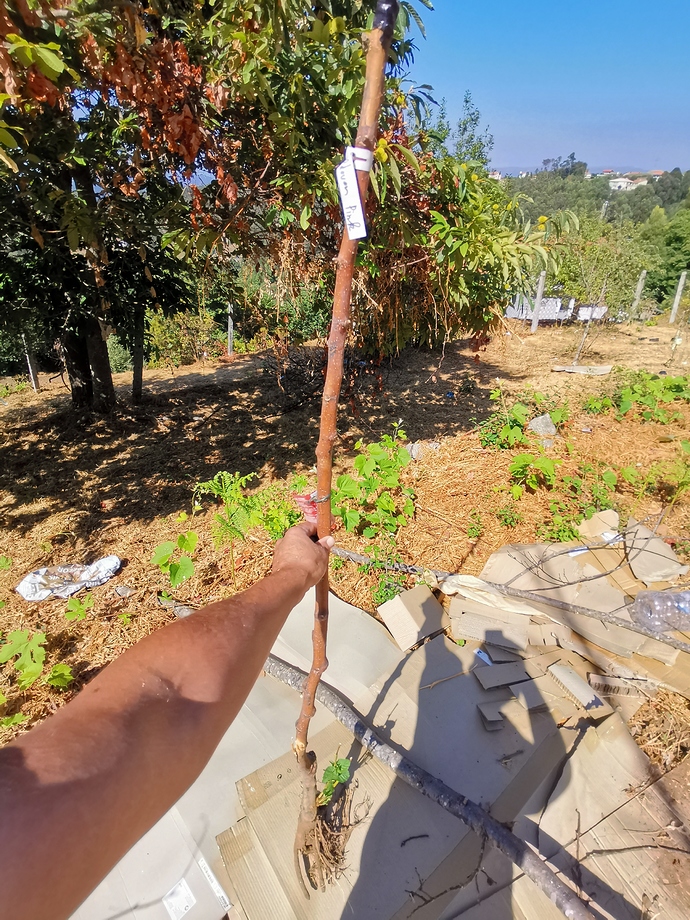 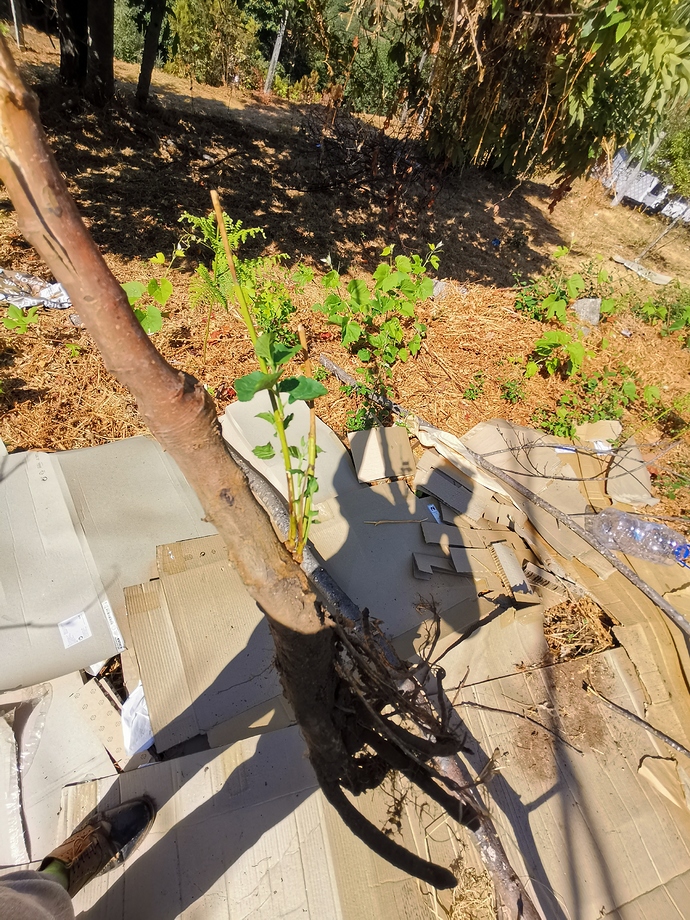 My collier Mulberry is dead 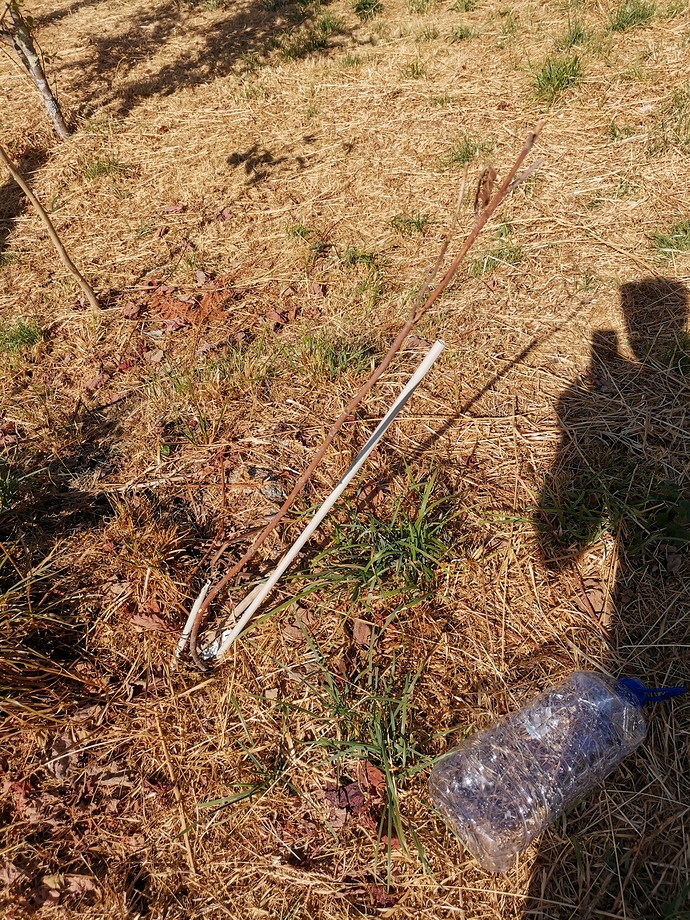 My Madeira mulberries were eaten… Moles? Toupeiras?
I had 4 of these and decided to bring one home and pot it up. The only Madeira survivor 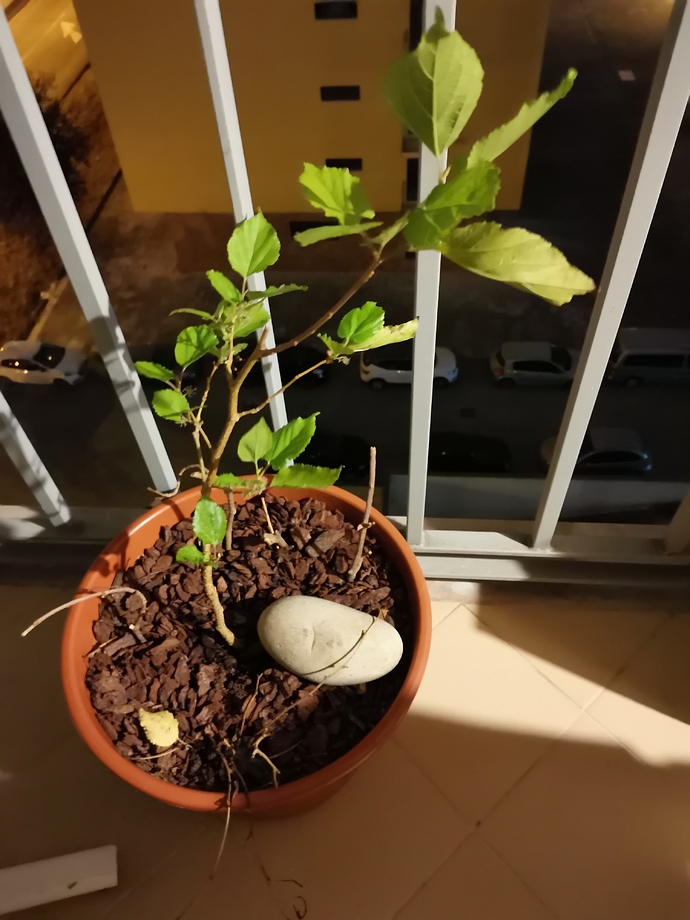 Maby it can be this hot temp? Maby it was too hot to the adaptation of this trees…

And lack of watering. It shall be solved with the big water tank now.
I am wondering if I can get a kind of system to water my trees with a long hose pumping from the tank. But I don’t want to put a engine or motor or it will be stolen. Lol

Very nice job with the water tank. Did you do it yourself? Is the concrete water tight?
There is a very serious imbalance between the trunk and the rootball in these mulberries. The trunk is way too big to put it into the ground. I would put these for one year into a big 25l container filled with local soil mixed with well rotten manure or compost. Keep it moist for one year and then put in in the ground. You will see huge difference. Otherwise the plant will struggle for a year trying to rebuild the roots. It might die when it is too dry and you are not around to water. Manure/compost will keep the moisture well when you are unable to water. I have been there and learned from my mistakes.

A nursery shall not sell plants with such roots - there is simply no way for the plant to take any moisture from the ground. It shall be with some fibrous roots at least.
Did you buy it bare rooted? The plant was definitely not grown in a container.
Where did you get the Bistrica mulberry? I cannot find a lot on it.

Hi @Lex yes I bought it bare rooted this year. In fact all bare rooted mulberries bought this year are surely struggling with the heat wave. Trying to water them more regularly. It should became more easy now with the water tank.
I didn’t do it myself the work in the water tank, I paid someone to do it.
The bistrica, Moldovan pink, collier and one of the Illinois everbearing all came from the same nursery in Ireland. I’ll try to get the name later on, don’t remember now.
From those lost collier and lost Moldovan pink, Moldovan pink is now sprouting in a pot but under the graft, so it’s not the original cultivar anymore. 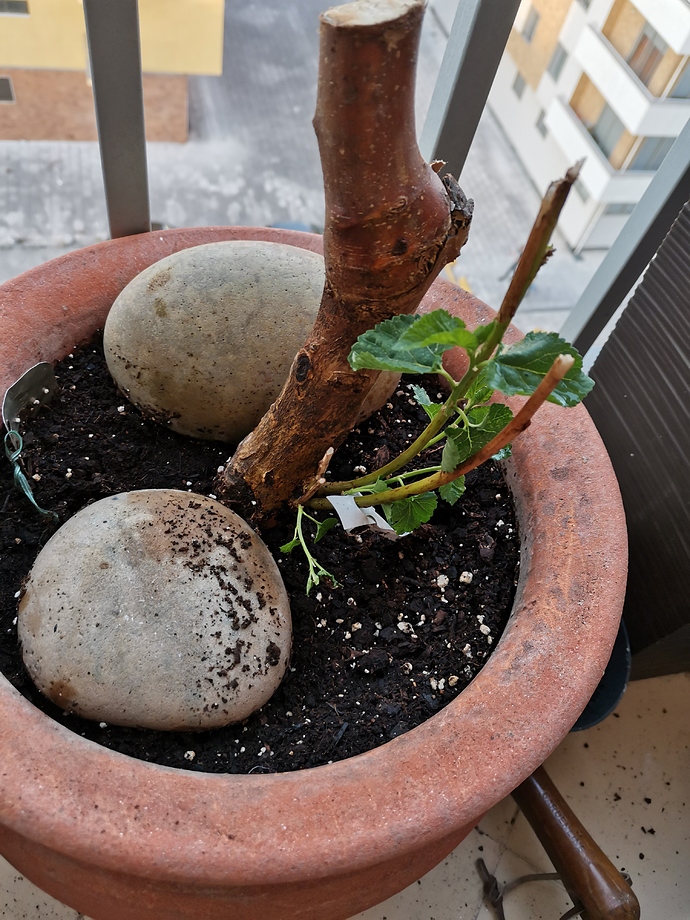 The bistrica is sprouting above the graft, so it should be the cultivar, but it will take years to recover now I guess.
Interesting fact about the Illinois Everbearing, I have 2 trees from different nurseries and they don’t look alike… Lol! The one from Ireland looks more like the real Illinois we see in YouTube videos and American nurseries. The other one I am not so sure… I’ll wait for next year with a bit more growth to compare

This year it has been terrible with the heat wave and some rodents/voles I guess eating away some of my mulberries root balls completely… Loss sugar cube Mulberry and some Madeira mulberries to this plague. Just have 1 Madeira Mulberry left and it’s so precious to me I dug it up, put it in a pot and brought it home to my balcony 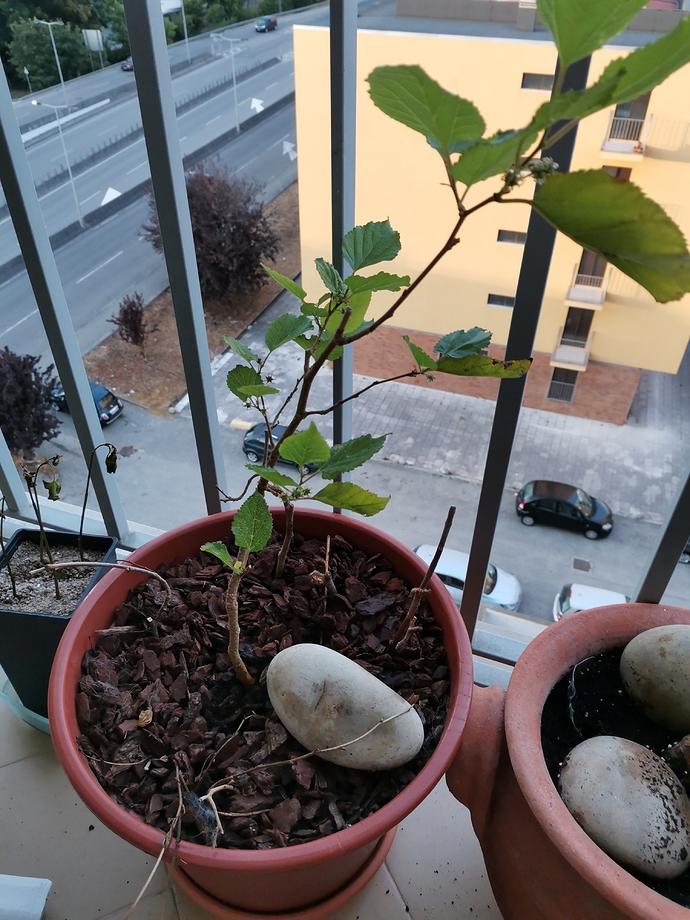 Aah, and I hired someone to cut down all the wild brambles in my property. He did a very nice job but cut away also my Gerardi dwarf Mulberry

If I can suggest something - just put the softwood cuttings into a sealed transparent poly bag let someone hide it for you somewhere in a shadow, e.g. behind a barn or something. Ask them after two-three months where it is and it will be rooted (depending on variety of course, some like morus nigra are terrible to root). If you do not know where it was hidden you will not open the bag to “check”. No misting, no watering needed. Curiosity kills the cuttings. It is always like that for me. It will work on rubra/alba and their hybrids. Nigra is impossible to root. I have tried everything. It just does not work at all.

Well, the water tank is full of water now, my water problems are over 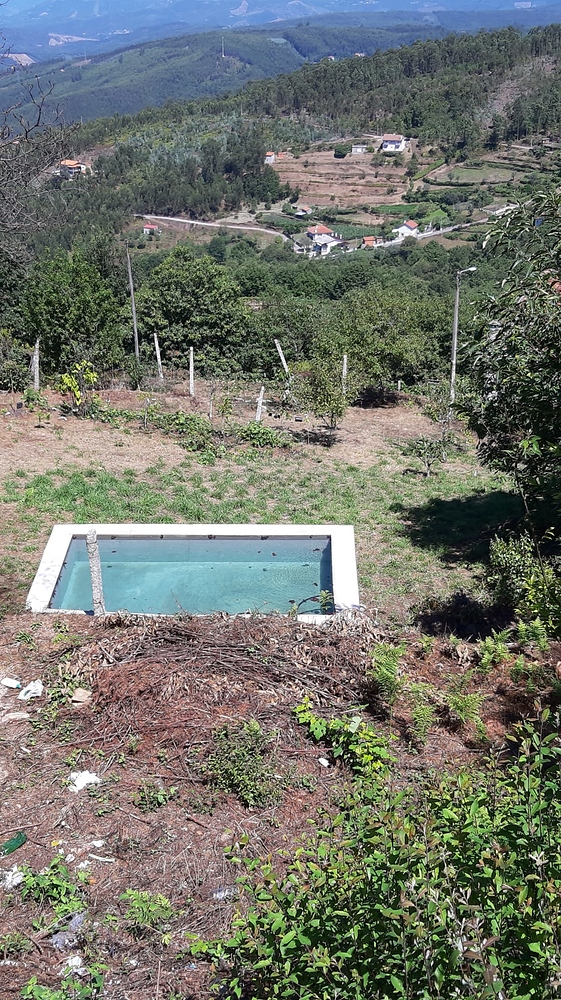 The builder asked me if I wanna set a drop by drop water sistem. I am planning to plant kiwis also. U think I should?

That’s really great! It’s the only thing that i don’t have… a water reservatory.