I’ve read not just on here but other sites and nursery blogs that Cp fruit unreliably and seem to die for no apparent reason . I almost bought 1 untill i read some reviews on them and got the juliet and CJ instead. i planted a montmorency from tractor supply that i think didn’t make it. luckily i only paid $12. you get what you pay for. all 3 of my romance have leafed out and putting on new growth.

I got CP because it was supposed to have the highest brix of all the RS cherries. Later I learned that it’s not the best producer or the most vigorous. It was a little 6-8" twig when I got it, and it never took off. I think the highest it got was about 12-14". HBUSA apologized for the small plant when they shipped it, so they compensated me by giving me a larger Juliet plant for the price of a smaller one. It had huge roots on it, and about 2ft tall above ground. Now it’s over 4ft tall and has put on lots of growth.

If I had a do-over, I probably would’ve got a CJ.

got the juliet an CJ instead

the 1st. juliet i thought i lost because they mistakenly sent it to me in december so i had to pot it and put it in my unheated garage. we hit -30f- -35f quite a few times last winter. i took it out of the garage in the beg . of may and it didnt start to leaf out until about 10 days ago. by then i had already ordered and planted another juliet. just goes to show how hardy these plants are! funny thing is both juliets are at the same stage of growth.

Yeah, I’ve been generally impressed with the CJ’s & Juliet’s, both seem about as maintenance free as can be.

I honestly would not take another CP as a gift. They grew up at a fast enough pace, but have issues and have yet to make a single cherry. They were in ground 4/14. Here’s a picture from a second ago: 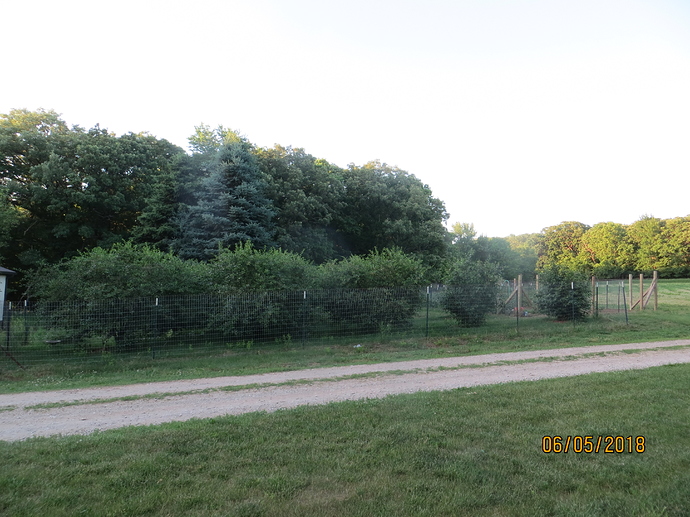 The three bigger ones on the left side are CJ’s, the fourth is a CP and the last one is a Juliet. (That’s a little misleading as there’s a second row behind there that fills in the gaps some. I mean the dang things are touching as it is, but you get the idea - the left side are the CJ’s)

Juliet went in ground 4/16. So the CP’s have two (2) years on the Juliet’s, and yet the Juliet’s have at least some fruit set this year. I will know what a Juliet tastes like in year 3. The CP…, well I didn’t have a single blossom so of course no fruit - but I have pulled off a few leaves with Cherry Leaf Spot… Year 5 and still a no-show!

BTW I’ve purposely not mowed in there yet as I want to dig up a few of the CJ suckers that you can see all along the fence line. The entire area in there is just loaded with suckers.

I bet my CP was from the same batch as yours subdood, a tiny twig. Needless to say with the 2017 crappy summer weather and strange winter, it died. I knew it was a gamble with the variety, but tiny plant + crappy weather = no go. I lost my big Romeo from Spring Hill too, so I’m not sure I would have been able to save it either way. The Juliet I got from HBUSA which was a bit bigger did thrive, and is growing well.

My 1yr old CJ from Spring Hill flowered, I’m excited to see if I get any fruit this year. I added another CJ and replaced the Romeo with Spring Hill plants. My Lutowka from HBUSA which I thought might be dead (was tiny like CP), looks like it’s taking off too. We had a late start this year.

almost got lutowka but was afraid of too much disease pressure because of its late fruiting.

I’m curious to know if any of those blooms on your juliet made it fruit? Mine is a year older than yours but about the same size. It bloomed like CRAZY this year, as did all my Romance Cherries, and even set some fruit that grew and stayed on for a few weeks. But in the end none of them made it (they dropped, not eaten by birds).

For everyone else, how many years before you got fruit? Thanks!

I’ve read that year four you should expect a little bit. Then more in future years.

Yes but only a dozen or so. They are ripening now and are starting to get some color. I need to cover them before the birds get to them. I definitely would like to get a taste.

I am very impressed by how disease resistant these seem to be. The foliage reminds me of a larger blueberry leaf. Deep green color with a bit of shine. Totally different from Sweet cherries or even Montmorency sour cherry.

My CJ has put on a fair amount of growth this spring. Unfortunately the few fruits that developed on it were aborted early. Unless there is one hidden in the dense center of the bush. They grow so thick.

Here is a current picture of my bushes. There’s eight but the Little Juliet highest on the hill is hard to see. It’s behind the blue and the white barrels. The last row is three CJ’s. The middle starting with the Juliet that’s hard to seen top has Romeo below it, then CP at the bottom. Then two Juliet’s that I planted last year are up closer. They are going to double in size this year if not more. The largest Juliet top left measures 64" and it grew a sucker too! Three different ones with a handful of cherries starting to get blush. 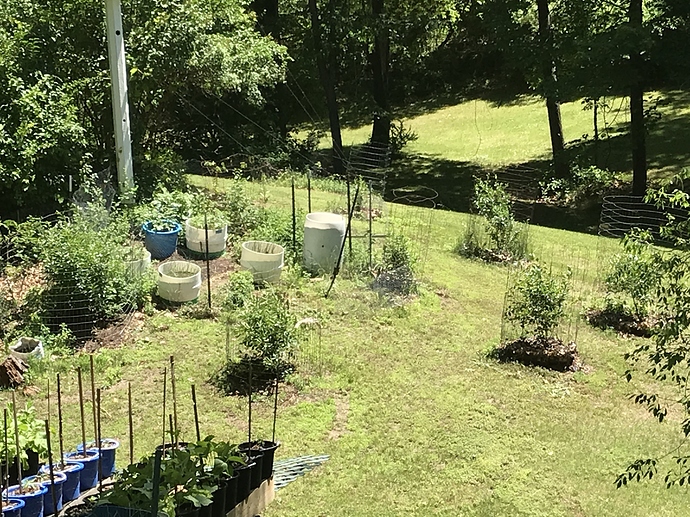 IMG_17204032×3024 2.45 MB
Here is a picture I posted in this thread three years ago when I planted the first six from HBUSA. It’s pretty funny because they are so small I can barely see them! 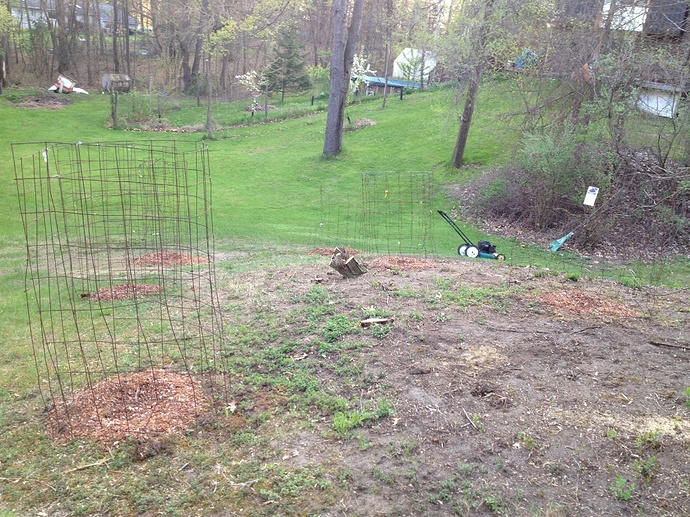 I’ve read that year four you should expect a little bit.

Yes, I would say that is right. My CJ was in a pot three years, then moved to ground, and is not producing great yet after 2 years in ground. Still getting used to it. 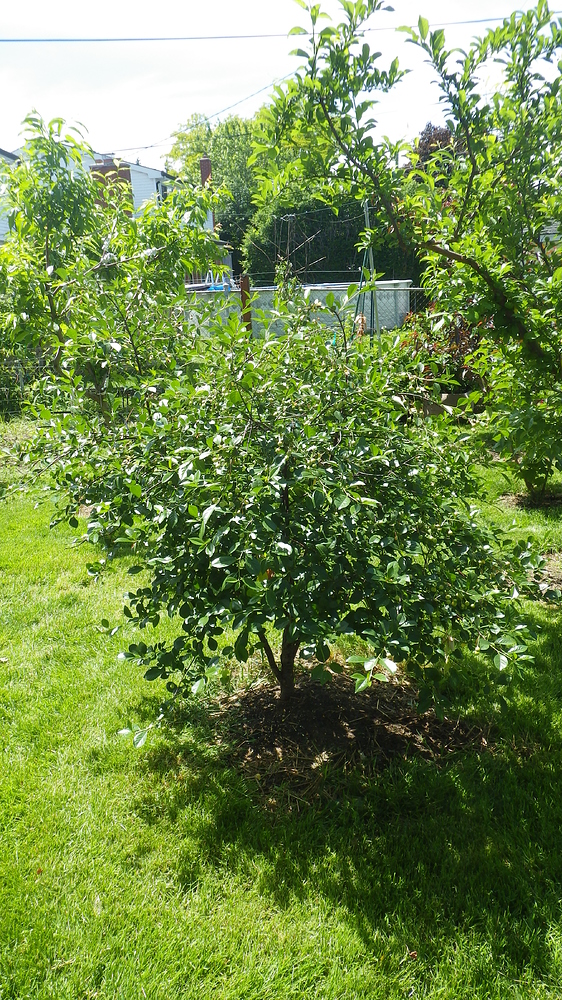 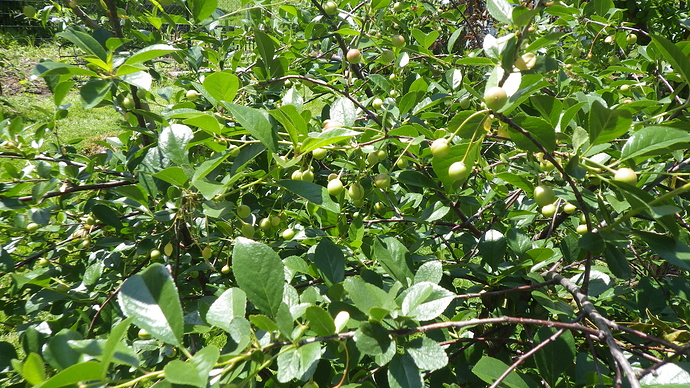 Looks like a nice thick trunk on it Drew.

I have also been observing this, but mine seem to be getting hit worse. I lost one trunk this spring, and now another is clearly basically dead. (all the leaves are yellow and dropping while the truck right next to it looks ok)

I have another bush that has lost a trunk, but that had a big sore on it near the base. Not sure if it is the same thing.

In any case I will prune out the dying trunk and hope for the best.

I had the same thing this year on one. It had already sent of few suckers up, so I left them and cut the trunk just about down to the ground. In a month it already looks like a healthy new bush (abour 2’ tall).

The size of these bush cherries on here is really, really surprising to me! I know others have remarked on how they were sold with the expectation of getting only to 8ft or so… and that’s not the case at all, is it?! I’m going to have to move mine, I think.

I have a Juliet that I planted too close to a fence in a berry patch. Looks like it needs about ten feet to spread out into, from some of these pics.

i may have the same problems w/ mine. honeyberryUSA says those sizes are for z2 and the warmer the zone you grow them, the bigger they will get. mine are about 8ft apart.

Not at all. My advice would be to not be afraid to prune it to the size you want it. I planted mine on 12 foot centers with the initial size advertising in mind. Boy am I glad I did

I had to remove 2 of mine this spring and the remaining 2 original bushes will be cut in half next spring to allow room for my apple trees. After a few years youll start having suckers popping up here and there. Im letting a 2 suckers grow that came up in a more desirable location, this is their 2nd year and they are probably 4ft tall already. Suckers grow like wild, getting nutrients from the established massive root system.

Hopefully I don’t stunt it when I move it later on. Am hoping it flowers quick, so my Evans cherry will stop dropping all of it’s flowers and produce something. It’s four feet tall already.