Do I need to get around the ends of the rows for spray or harvest? I would like to know what people are using for equipment in small orchard settings harvest or other. I am putting in about an acre, but there’s basically an access road right down the middle. Starts to cut fruit tree numbers pretty quick with roads through the middle and around the perimeter??

You probably need to explain your plans in more depth. Are you planting trees on m111 with a very wide spacing (15+ feet) or are you putting in trees on m9 with a 3 foot spacing between trees? What is the target height for the trees and are you willing to prune enough to keep them at the target height?

Modern orchards on dwarf stocks typically use something like 3 foot spacing between trees and 11-13 feet between rows. The equipment is sized to work within the limits of this space. Old orchards have wide spacings between trees on standard size rootstocks. In between these two extremes are orchards on semi-dwarf rootstocks.

I See what you mean, with big trees and a grid pattern I guess you could weave about. Due to numerous factors I have a melee of things in my nursery, probably 2x what I should actually plant out. If I only had stuff on one kind of rootstock that would simplify things.

I would like to prune and train so that things get and stay productive - and try to maintain height. Possibly for u-pick (no ladders).

That said I guess I should reserve the bigger rootstock stuff for wildlife plantings and just keep the orchard dwawf and semi-dwarf. Because of my climate extremes I plan to irrigate … so I’m thinking rows, like 12x18 on G890/969

And to the equipment - I’m thinking small would be nice, like a little gator or pallet forks on a subcompact tractor - But I might want to drag a manure spreader through 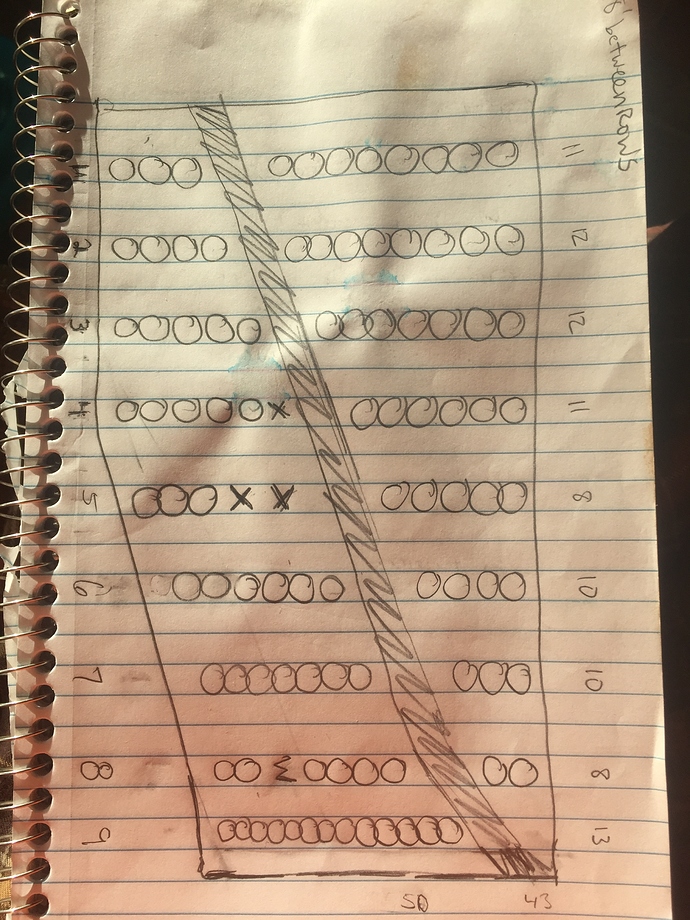 If you think you might need to irrigate apple trees long term, I would consider using mm111 possibly with an interstem.

I am a complete novice and have no experience creating an orchard, but would it make sense to run your rows parallel to the road instead of perpendicular? You may have better usage of the space that way. Just a thought after looking at your potential layout, and I would welcome additional comments from someone with more experience as I would also like to know if my thought process is valid.

Which way is north on your map?

The layout looks reasonable to me overall. You could probably get away with not having an access road around the perimeter. However, that means you will have to back up to the road to get out of each row. That could be difficult if you’re pulling a trailer or a manure spreader behind a tractor.

As far as a spacing for G890, G969 I also think that your values are reasonable at least as a starting point. But a lot of variables go into determining spacing. I would suggest you look at this tree spacing calculator and play around with different settings to get a better feel for how all of them interact. Note: the calculator is setup for North/South rows- with East/West rows you need a bit wider between row spacing due to how sunlight hits the trees.

The calculator doesn’t cover some of the newer Genveva rootstocks so use this chart to convert a newer rootstock like G890 to older rootstock sizes G30/M26/M7 etc.

Now the calculator is for climate conditions in Michigan and it appears you’re in zone 4b in Montana so there will be differences but I think in general the calculator will work for you.

Are you planning on using drip irrigation or sprinklers?

As far as leaving room at the end of the row, you would only have to do that on every other row.

Yes, for sunlight, The rows are North/ South, North to the right. The zone is something like 4. The extreme cold isn’t as much of an issue as the blasted wind and erratic freeze thaw fluctuations.

And that is a good calculator - it’s just hard to figure out all the details of a mixed up orchard. I think I have nearly 2 dozen varieties of apples. And then there’s pears and plums… and I’m still debating over the NAP “permaculture” orchard concept… leaning towards no. I guess I should spend the time to at least put the apples in rows with other like vigor varieties.

The plan is to do sprinklers, seems like drip is suitable for high density trellis, but I would like to have more robust root systems for wind/drought&freestanding reasons. Th water is really why I’m trying to get this sorted out. That W on the map is a well that I want to use and get developed- no pump right now. I don’t fancy watering that many trees with a hose. 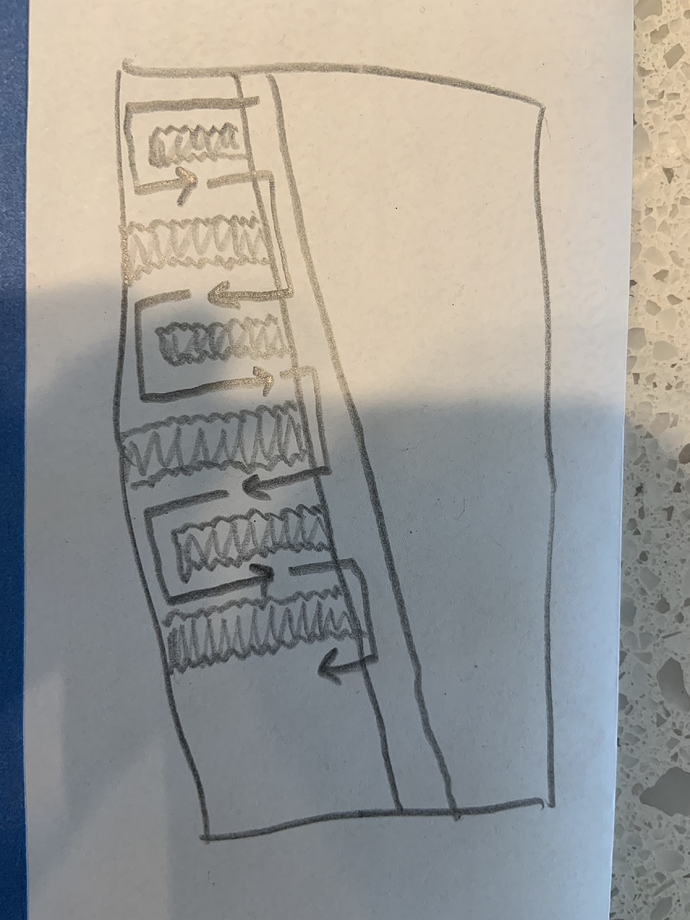 I just haven’t wrapped my mind around the timing and technique to do this. Would they need to be permanently staked for wind? 80 mph gusts aren’t uncommon? I have quite a few m111 that didn’t take this year - and some G11 and G935 that have grown up from previous years failures. Graft and then summer bud? I haven’t got much experience budding yet…

Yes, the spacing can vary with each individual tree even if the rootstocks are the same since scion vigor varies a lot. To help you determine scion vigor for cultivars not listed in the calculator I recommend two sources.

First https://www.orangepippin.com/varieties lists the scion vigor of many apples.

Second I would check:
https://www.homeorchardsociety.org/growfruit/apples/estimated-tree-vigor-for-apple-varieties/

The two sources don’t always agree partially because the Home Orchard Society deliberately over estimated vigor some to insure a tree will fit in a given space.

I’ve had mm111 and antonovka withstand multiple 100mph storms that severely leaned or laid over bud118.

I often layout new orchard rows with my mower ( tractor / brush hog) being carful to follow tire tracks / edge of last mowed pass.
Mowing a Feild the easiest way, leave a strip of tall grass ( 1ft wide ) where I envision the row. Leaving extra room at the ends to make the turn. While envisioning pulling a trailer.?
If I don’t like the results, … I may try it a different way.
I personally would not want those “dead end” ally’s .
Haveing to back out / in ? You want good access. Convenient.
Spartys drawing is interesting. I would want to be able to keep driving forward.
What are the boundaries ? Open field , forest other ?
A tree missing at the end of a row can allow more air movement , light , which may be a good thing. Depending on your site.?
Sometimes it’s not good to jam a block too full.
Is that road permanent?
Would it be possible to reorient it to fit more rectangular rows ?
Just ideas. Every site is different.

This has info for spacing on Geneva rootstock .
Reig-Pages-3-8-from-NYFQ-Fall-Book-2017.pdf (1.1 MB)
I had to find an online source because the file is too big, but this has good info.

Hillbilly, I’m going to redraw based on Sparty’s recommendation. I have a little too much fresh air on my site. I’ll be trying to grow up a windbreak on the south and west sides. I spent time thinking i want the place to be enjoyable and not a source of aggravation. Adequate room for equipment would help to that end. As for boundaries there are gullies on either side N&S, a real road to the West and a slope down to my house on the east. The road angling across doesn’t see much use, it would not absolutely have to be preserved but it serves as vehicle access to the back of the house. Not mandatory, but nice at times like when the wife insists on buying a 1950’s cookstove - and access to propane tanks; though they can be filled from the other side. There’s also overhead powerlines crisscrossing every which way. I talked to the lineman. I’m making sure they have access to the poles… and naively hoping for the best.

I’m sure better sites exist. Just dealing with the best I have. (Lightbulb moment) Actually maybe it’s not the best I have. And I haven’t built the bloody fence yet. There’s a nice field to the North I was thinking maybe someday of expanding to. Id have to pump water a ways but vehicle access would be so much easier. Scratch the redraw. So happy.

Nil, thanks! I hadn’t seen those articles before. Seems weird they say 890 is like M7-ish, but recommended spacing in row of 6’ - wow! 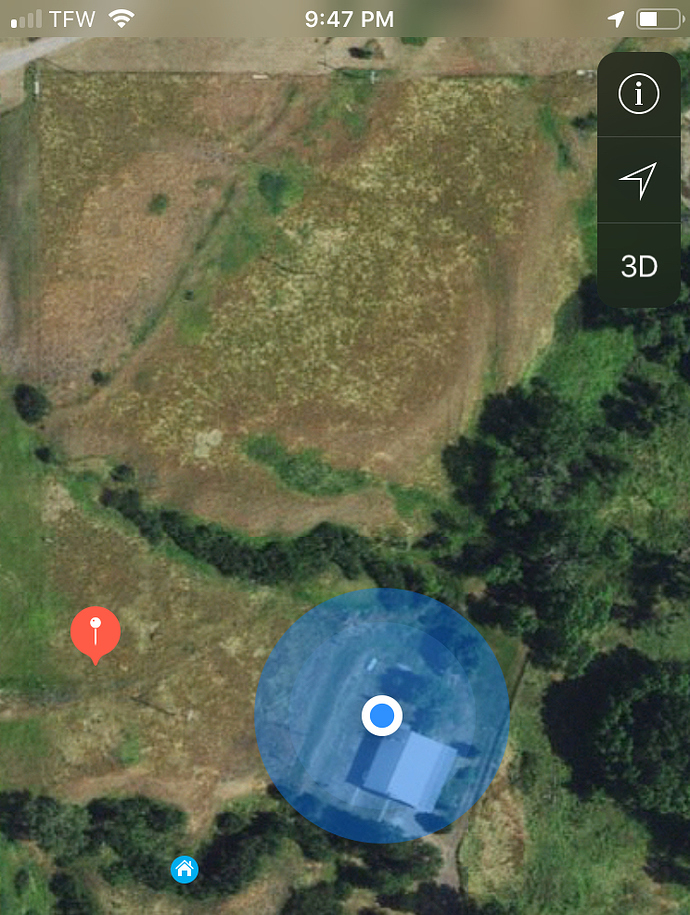 The photo on page 43 of the second article convinced me to buy G-969. That looks like a perfect backyard tree IMO.

The really close spacing for G890 is for trees that are supported by a post or a trellis and trained to a spindle system of some type. For self supporting trees trained to a central leader system you need a lot more room and the trees will crop later in life. For the tall spindle system, my Goldrush on G890 is supposed to be spaced 4 feet apart in row according to the calculator. For an unsupported tree trained to central leader system the spacing in row is supposed to be 16 feet. This is a huge difference.

I hope to get a soil sample dug today and sent off. My goldrush all died😕.

In some article regarding G890 I saw mention of a single wire trellis to support young heavy bearing trees - but I don’t know what training/form they would take. I like the idea of having a wire with the irrigation on it for mowing underneath and to keep mice from eating the plastic

The recommended high-density spacing for G890 is 6’, not 4’. It is supposed to be free-standing with normal spacing and growth habit. I think the spacing and support will depend on how it is pruned. If the center of mass is high, you will need a lot of support. With the G890 and G969, you may get away with sturdy tree stakes, and cropping low on the tree for the first few years. I doubt they would require a wire support if they are properly spaced, and the mass is not all at the top.