There is a problem this year I don’t normally see which is pear rust. Seen similar posts on other forums which may imply it’s worse this year than others. If you grow as many pears as I do you are likely to see it all at one time or another. Rust though unattractive and inconvenient is a minor thing in comparison to fire blight. I will remove as many of the rust infected leaves as I can as they show up and spray with a fungicide. These were a few of the problem leaves. As a side note and the reason for the post is many pears show no signs while a few such as douglas seem very susceptible. Several harrow delights growing right next to them show no signs of pear rust. I removed these leaves as they are a point of infection. 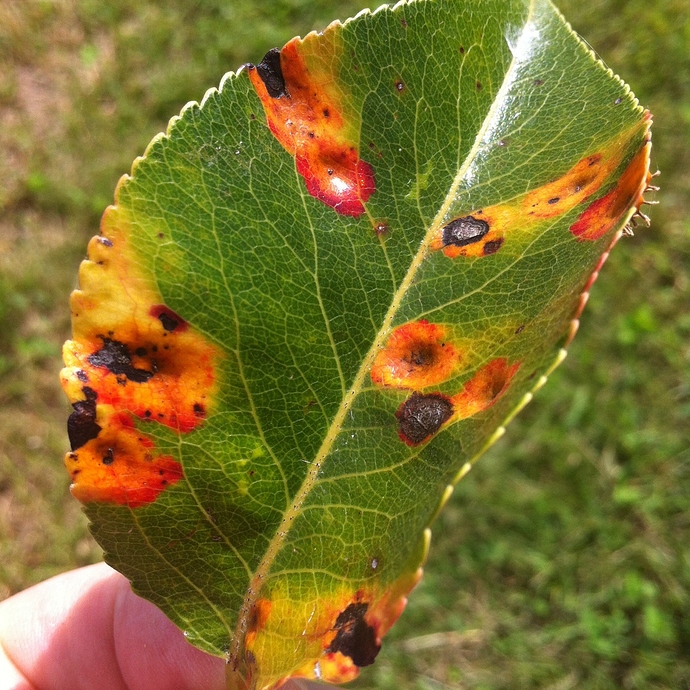 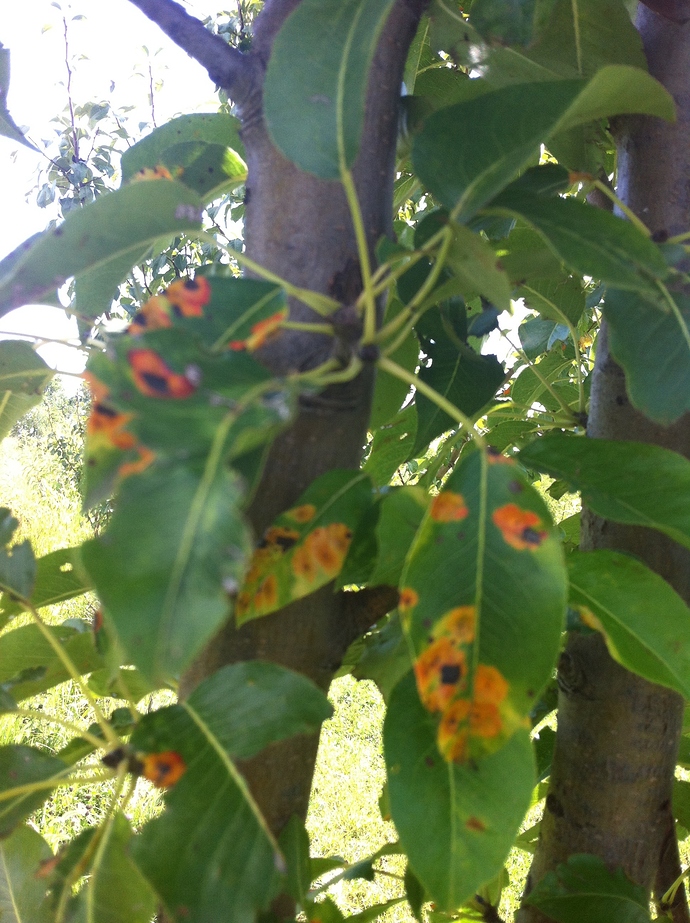 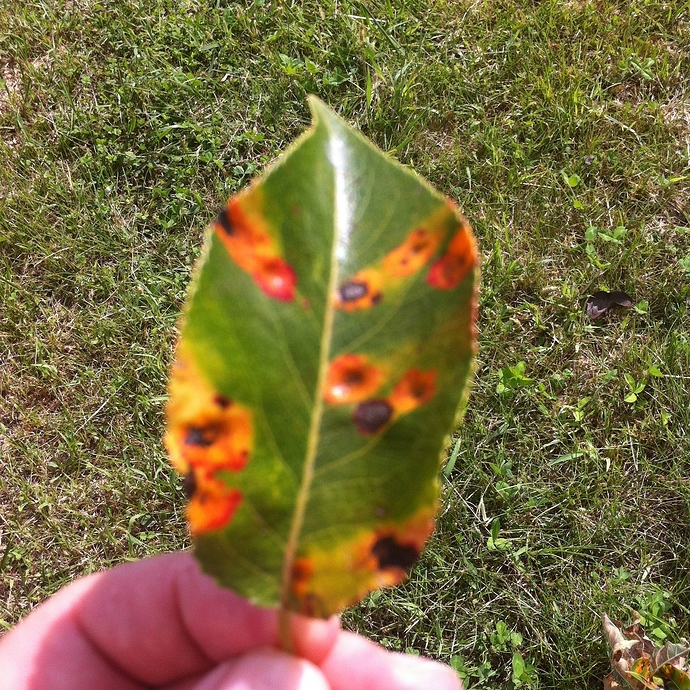 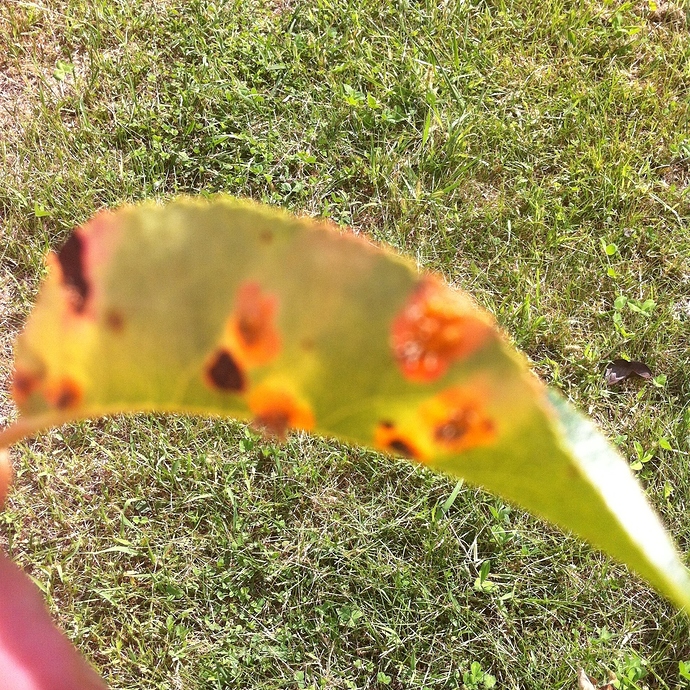 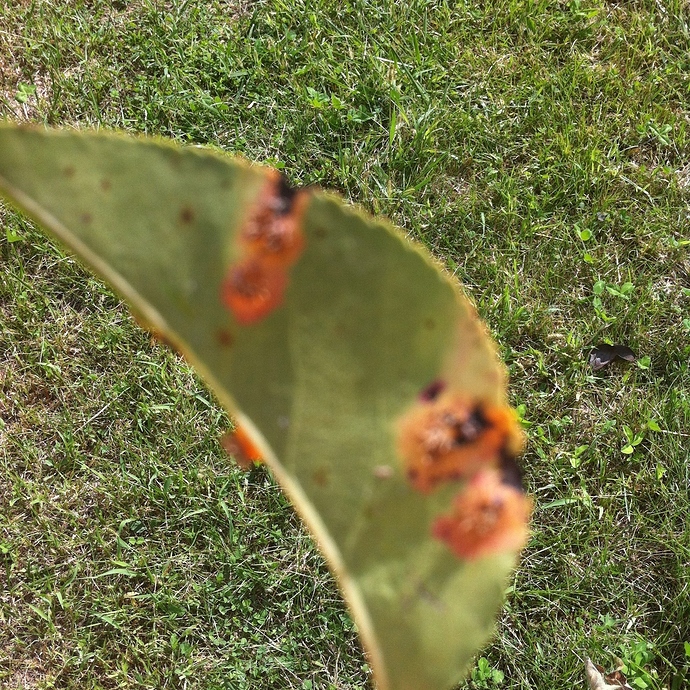 Wanted to post additional information since I left out the disease cycle and methods of treatment. See this article http://www.missouribotanicalgarden.org/gardens-gardening/your-garden/help-for-the-home-gardener/advice-tips-resources/pests-and-problems/diseases/rusts/cedar-apple-rust.aspx. As the article states “Cedar-hawthorn rust, in addition to affecting apples and crabapples, sometimes infects pears, quince, and serviceberry. Cedar-quince rust has the broadest host range and can infect many genera in the rose family. In addition to those plants already mentioned, mountain-ash, flowering quince, cotoneaster, chokecherry, and photinia are also hosts for this disease.”

My pears have rust this year. Has anyone had success using fungicides on the pear tree. I used copper in the spring this year but that was not effective against the pear rust.

I’m going to try a new fungicide next year.

Thanks for posting the link. I was unaware that CAR would infect pears.

Bill,
It’s a variant of rust that’s a little different. Some pears seem nearly immune such as the Harrow pears. The most susceptible are the kieffer style pears such as douglas Full text of "The Douglas pear" that have kieffer as a parent in my experience. If you live in an area with high amounts of juniper it might be worth it to plant harrow sweet, harrow delight etc. that are very resistant. This link might help someone http://www.gardenguides.com/110890-prevent-cedar-rust-pears.htmlhttp://www.gardenguides.com/110890-prevent-cedar-rust-pears.html

The two links above needed to be separated.

How to Stop Rust on a Pear Tree

Pear rust, also known as pear trellis rust, is a fungus spread by wind-blown spores. Both juniper and pear trees suffer from this fungal disease, and they spread it rampantly to each other when the two types of trees are planted close to one another....

The article suggests using the proper fungicides but doesn’t say what they are.

These links may help if this fungicide is not restricted in your area http://www.store.tlhort.com/p-3528-penncozeb-75-df.aspx
http://www.cdms.net/LDat/ld8D5000.pdf
http://www.upi-usa.com/agricultural-products/penncozeb-75df
I’m not sure what restrictions apply on this product so do your own research but it is labeled for pear rust.

Wonder if the Penncozeb is any different than Manzate Pro Stick? They both list their active ingredients as 75% mancozeb. Cheapest I can find the Penncozeb is $50 for 4lbs. I can get the Manzate for $24 for 6lbs. Both are listed for pear rust.

@clarkinks, pear rust is back. Time for more research. Any success in fighting it.

Regarding mancozeb I read this and didn’t like the 77 day harvest statement​.

“Mancozeb products such as Dithane, Manzate Pro-Stick, or Penncozeb at 3 or 6 lb/A. Do not combine 6 lb/A prebloom or 3 lb/A all-season schedule. See label for details. Do not apply within 77 days of harvest. Group M3 fungicides. 24-hr reentry.”

Pear rust is proving highly difficult to control. I think spraying or killing the cedars is the key to fighting it and I did not have time to do either. I did observe the cedars at the time the rust began and am 100 % sure they are harboring the rust. Pear rust is just like cedar apple rust hard to control and unattractive but usually causes no serious problems. One thing I should mention is that several varieties such as harrow sweet and harrow delight show no signs of rust so just like apples some types are not susceptible to CAR. If it becomes a big problem for anyone they can top work to those varieties that appear unaffected.

Do not apply within 77 days of harvest

I wonder why so long for pome fruit? With tropical fruits it can be sprayed up till the day of harvest and for many vegetables such as tomatoes and squash it has a PHI of 5 days. Wonder if it marks the skin of the pears?

I’m going to revive this old thread because my suspicion is pear rust is starting to be a bigger problem. I’ve seen other people post about it and many are likely lurking who have it and not commenting or posting. The cedars here are hosts for pear rust. For people who need one or two pears and have a lot of cedar in the area it would best to grow something like harrow sweet or harrow delight pears that are highly resistant. I’ve never saw a spot of rust on those trees. I’ve read sulphur is effective in treating pear rust Rust Mite Control: Information For Treatment And Pruning Rust Mite Damage

It shows it can be used on Apples ,Crabapples ,Pears ,Quince
PRE-BLOOM/BLOOM USE: Begin applications at 1/4 to 1/2 inch green tip and continue on a 7- to 10-day application schedule through bloom. Do not apply more than 19.2 Ibs. active ingredient (25.6 Ibs. product) per acre per year.

EXTENDED APPLICATION OR TANK MIX: For implementation of IPM programs, applications based on tree-row volume or for use as a resistance management tool: begin applications at % to ~ inch green tip and continue applications on a 7- to 10-day schedule through the second cover spray. Do not apply more than 16.8 Ibs. active ingredient (22.4 Ibs. product) per acre per year. It is recommended that this product be used in an Integrated Pest Management Program.

Apply in a minimum of 50 gallons of water per acre. Do not graze livestock in treated areas.

Do not apply within 77 days of harvest.

The application is tricky so if your going to use this professionally in your orchard use all of the precautions and use it responsibly with with protective wear as recommended and according to label. This guide spells it out well in a straight forward way http://www.fruitadvisor.info/2012netfmg/12-pears.pdf but I would read through the other guides I listed above before using the product.

It can be part of general management http://jenny.tfrec.wsu.edu/wtfrc/PDFfinalReports/2014FinalReports/ShearerBiocontrolFinal.pdf

Once again i will revive this thread since i see rust being brought up in other threads again. Ive learned some pears are resistant to rust eg harrow delight & harrow sweet.

Always good to hear good news about pears that I’m growing. My neighbor about 30-40’ from my pear trees has two large cedar trees.

My kieffers love rust. It looks like maybe some (or most?) of the Asian pears might be prone to it, more so than euro pears. I don’t notice it so much on the euro pears. I’m assuming the asian background of kieffer is the reason. My asian pears are young so i don’t have a good read on it yet though. An older korean giant sited slightly further from cedars only had minimal to no signs, while some younger asian varieties had more (but not as bad as kieffer this year). Curious what you’ve seen with your asian pears.

I think as you said asian pears and hybrids are more susceptible to rust. My experience has been that Duchess d’ Angoulme is also highly sucseptible.

This year im going to try to gather additional rust information. Hopefully people whos trees show rust can update effective treatments on this thread. We also need to know which varities do not have symtoms of rust. My concern is some people live in areas where cedar and ornamental pears belong to other people who make no attempt to control rust. In many cases resistant varities may be the only solution. Here is an example:

Pears that get rust

Pears that dont get rust

Pears that have minimal rust damage
1.
2.