I think Nikita’s Gift is especially beautiful in the fall. Yates also has beautiful yellow leaves. If I can get photo2s to load, I’ll add a couple more. These are Nikita’s gift. 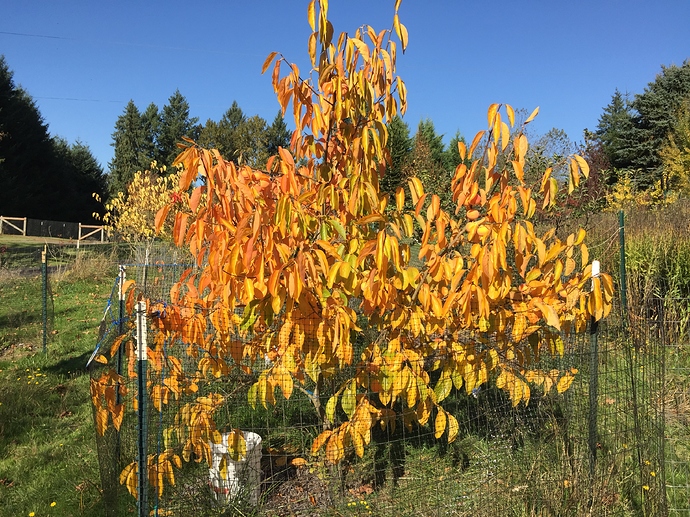 Got a couple more photos to load. Here is Yates. Pure yellow leaves. 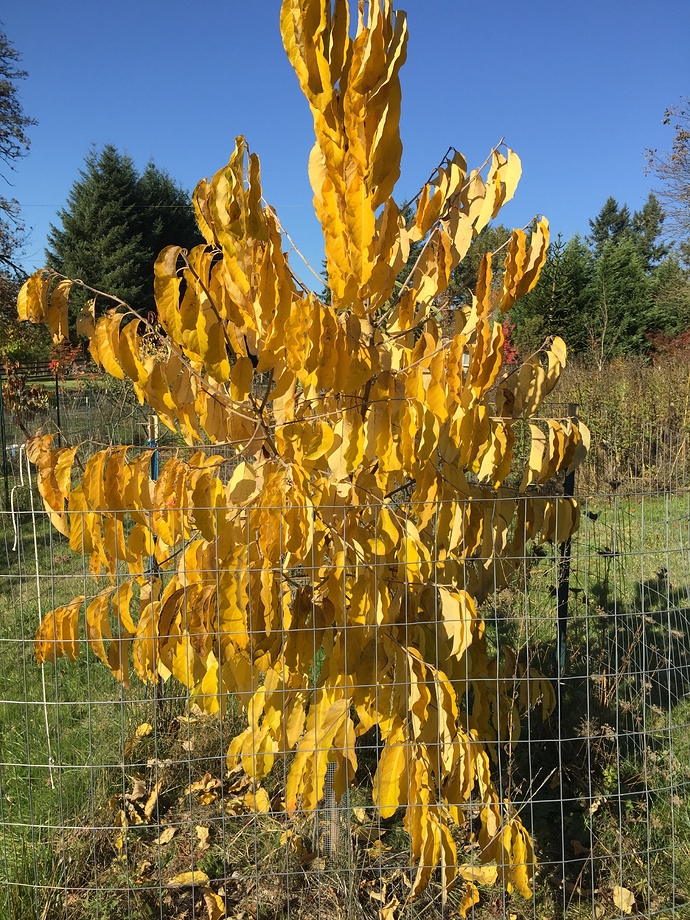 Saijo. `Simmons are a little sunburned, I guess, and the leaves have similar appearance. They are like this every year. The leaf appearance shows multi colors at the same time. 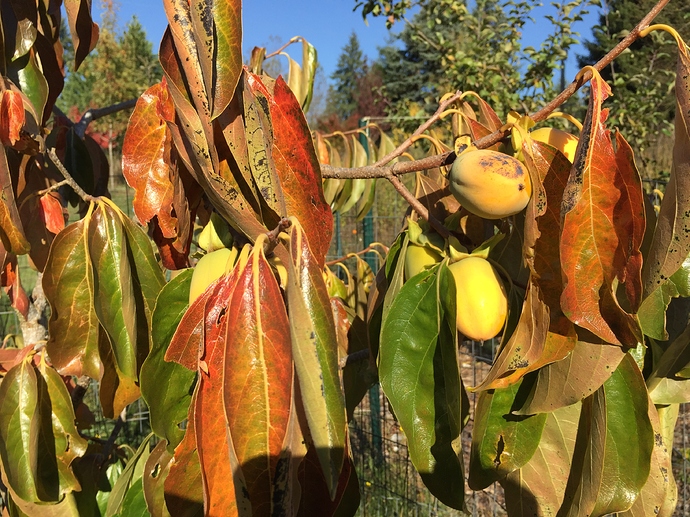 What city are you living? I wonder can i plant all the same types persimmons as your in Seattle weather zone 8 b. Vincent

Vincent I am in Battleground WA, 161 miles south of Seattle on I5. My elevation is higher and I am further from the coast, so here the winter might be a bit colder and summer a bit warmer, but not much. I think you could grow them just as well as I can. Burnt Ridge nursery and Raintree nursery, both in W Washington state, were my sources. I think I am either zone 8a or 8b, not sure which.

Thank you so much.
I might plant Nikita Gift persimmon. Vincent. 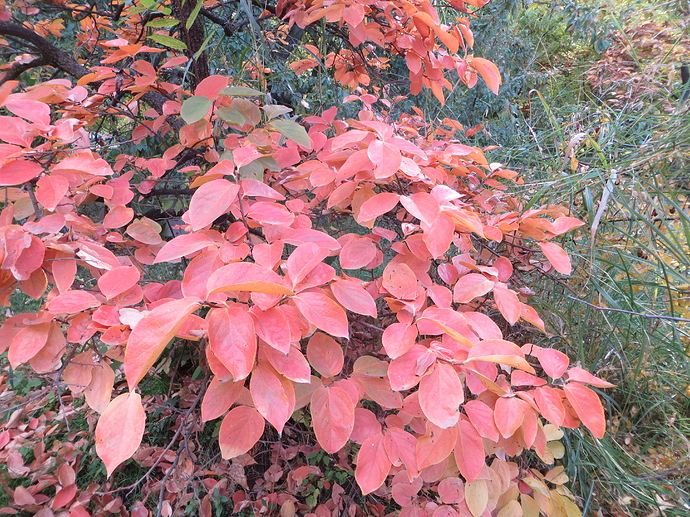 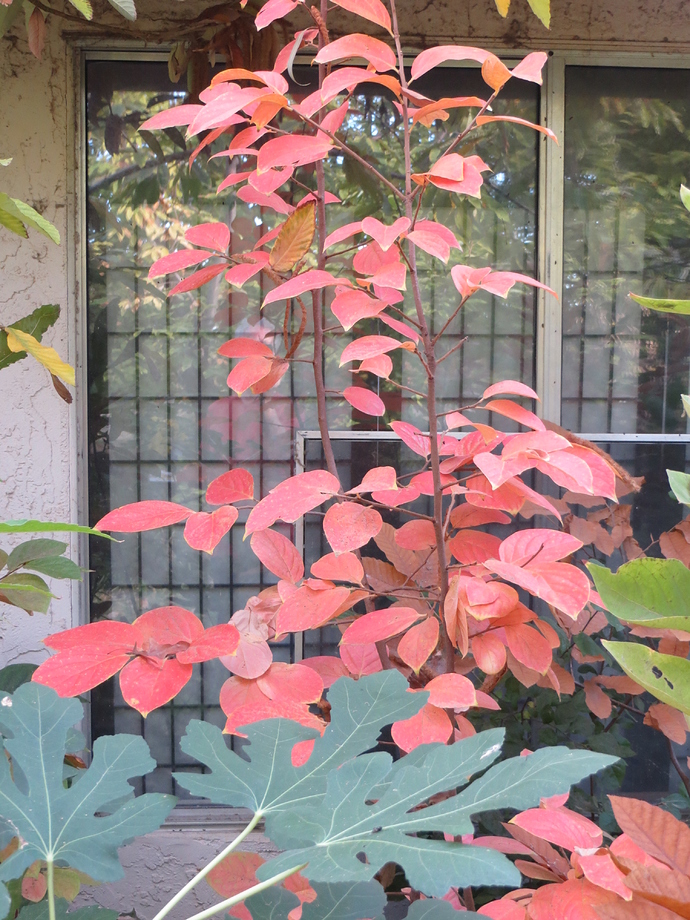 Those red leaves are brilliant!

Nikita’s Gift might need a pollinator. Maybe @strudeldog can recommend one. He has experience with it.

Thank You Matt. I will read more information.

I don’t have a pollinator. I’m not aware of any persimmon trees in the neighborhood. They are rare here. My NG fruits are seedless. Physiology varies by region, but as far as I can tell, no pollinator is needed for Nikita’s Gift.

Nikita’s Gift will fruit without a pollinator, but for me It has dropped most it’s fruit when a pollinator was not present at least so far for me it has continued to drop all season more than I see on other cultivars. Hoping it outgrows this, but the only year it has held a good number of fruit was the year I had a Male kaki blooming.

None of the native persimmons, including both wild and grafted varieties, have anything like that kind of fall color here. Some of the Asians have really nice color, though.

My Nikita’s gift fruited for the first time this year: 8 smallish (at least in comparison to other Asians) beautiful fruits with taste that I was super impressed with. I’m pretty sure I don’t have any Asian pollinators but the Nikita’s gift did have some hard, dark, but flat seeds that I’m guessing aren’t viable. I just grafted the tree in 2015 and twig girdlers pruned almost all the limbs way back last fall, so I was very pleased to get as many as 8 fruits this year.

‘Wabash’, a D.v. selection, develops reliable red-purple fall leaf color.
Several years ago, I selected a roadside D.v. out of Elmore Co., AL that had incredible red fall leaf color - when I first spotted it, I thought it was a blackgum (Nyssa sylvatica). Not sure that any of my grafts of it here are still alive. though.

If I do see any color on native persimmons it’s in the red/purple range, but a lot of native persimmons seem to drop their leaves fairly early before they really even change color at all. I’ve never seen anything like the yellow leaves in Bear’s photo of Yates. I’m thinking that must be due to his very different climate.

That’s a good point about climate. We had almost no rain, almost all summer long this year. I did water these young trees fairly often. Or particulars of local soil. Mine is acidic, high organic matter, very high iron, low magnesium, low calcium, high potassium. I watered in epsom salts early spring for the magnesium, and was rewarded with the most vigorous growth so far. Those other colors sound nice too. I have a young Prairie Star, which in its first year had various tones of yellow, red, and purple in the fall leaves, but this year it’s still pure green.

Wow! Stunning.
My persimmon leaves are still green over here in Seattle. But this is their first year and they probably havent learned that it is fall yet.

@Bear_with_me,
Based on your blog post from last year, I am growing NG that I got from One Green World in Portland. I got it in June of this year. It didn’t put on a single leaf since then! It looks healthy and undamaged but visible growth has been zero!
Should I be worried about this? My other persimmons (Saijo and Jiro) have grown profusely and the Jiro has also produced some ripe fruit.
How long did it take for NG to start developing fruit for you?

@ramv, did it have leaves when you bought it? If so, I think it is just settling in. Some plants spend all of their first year growing new roots, then the second year have a big burst of growth. If it was leafless, and still doesn’t have any leaves, then I wonder if it died. It’s awesome that your others grew so well!

My Saijo and Nikita’s Gift are on D. lotus rootstock. I don’t know what One Green World uses. That could also be an issue. I bought mine bare root, mail order from Raintree. I think the first year neither of them grew very much, although they did make leaves. I have Prairie Star from One Green World. The first year, it barely grew, and the second year it had herbivore damage and did not grow back. Then this year it grew from 1 foot tall to 6 feet tall, in one season. I suspect it is on D. virginiana, since it is an American persimmon.

I wouldn’t worry about it either. You’ll definitely have an answer in the spring. If it leafs out, it will probably grow exponentially.

@Bear_with_me, yes it had leaves and they are still there (just turning color). I up-potted it from 5 gal to 10 gallon container and will likely leave it in a container until it shows clear signs of outgrowing it. I am sure it is not dead

Raintree says that their NG is on D.Virginiana. OGW also says the same thing so it should be good.