Any survival or dieback reports for zone 6 or colder this past winter?
Well here is what it looks like the results are for my persimmons this past winter in my z6b semi-protected valley location with great hill/tree windblock protection on 3 sides, north, west, and east from the harsh winds…
We had a lot of consistent chill hours Dec-March, without as many winter warmups as some winters, and the less protected nearby town recorded our nights to have a lot of lows in the mid-teens to mid 30sF and a lot of highs in the 30s to 50s, with the lowest fronts about +11F in Jan, +6F in Feb, and a low on March 4th that they later revised down to +3F, it seems several nights were revised down a bit from the original reports. But this winter was milder than some as far as lows go, in past winters I have seen below 0F including down to about -7F a few winters.
Kasandra hybrid, a year in ground, no protection, no dieback.
Kasandra hybrid, small t graft, no dieback.
Nikita’s Gift, a year in ground, nice 4’ tree from Burntridge, wrapped with coardboard, died halfway back, bottom half is regrowing.
Rosseyanka one year in ground, no protection, no dieback.
NB-02 hybrid, new November dormant fall planting, no protection, no dieback, broke dormancy well late this May.
David’s Kandy hybrid, new November dormant fall planting, no protection, the “large” tree i recieved was a last season scion grafted on top of a large rootstock, the scion totally died but the native rootstock is growing fine now. The scion was obviously alive after planting because i snipped a small twig off the top around Christmas and stored it, and at that time the cambium was still green. So I guess it froze out above 0F, though Mr Cliff said it took -16F at his place, though he is not replacing DK trees that die from winter kill so I guess he accepts that my above 0F winter killed it.
I was disappointed in Davids Kandy and Nikitas Gift since this was a milder winter with no temps below 0F… At least i saved the DK sprig which looks like it may take on a potted native ive since grafted it to… If we get a -7F again the next years they may be toast…
Do any of yall have any reports on any other survivors or ones that didnt survive this last winter?

JT-02 aka Mikkusu survived -20F last Winter without any Winter protection and got 3 little fruits this year. This is a 4 years old tree.

That is wonderful Tony! I must have JT-02 Lol! Ive grown pure kaki since a boy in Louisiana but now in this colder climate we need these hybrid trees!!

That all sounds similar to my results. I kept my David’s Kandy potted over the winter and planted it out this spring. So not so excited to hear it might not survive zone six winter’s. I had one pure kaki that survived with no winter dieback: Inchon. We got down to -1.

I am in zone 6 a Central MA. My Nikita’s Gift is 4 years old, I think. I winter-protected it fior the first 3 years. The top that was above the protection died back.

This past winter, I had enough of pampering it. I did not protect it at all. We had a winter with no temp fluctuation. Low is about -5, -7 FF for a couple of night.

No die back at all. The tree looks great. Leave out as normal.

I think as the tree is older, it has more energy to withstand cold temp. Consistent but not brutal winter did help, too.

I would not be surprised if in a year of -20, it would die on me. I hope I could taste its fruit before it croaks.

You haven’t had any fruit from a 4 year old tree? Man… I guess I have a long wait ahead of me. Sounds worse than pear.

My NG has had flowers:

SMC I am hoping that my small Davids Kandy graft takes and i can protect it a few years and retest… When i cut the dead scion off of Cliffs large rootstock i saw a lot of black scar tissue around the graft area and i am hoping the loss was due to the rootstock rejecting the scion going here into the 2nd leaf rather than winter kill, ive saw that happen in a young graft so i hope Cliff is right on his claims of cold hardiness… But i did get another report of someone else an experienced grower in 5b-6a who also lost his this winter at a low of barely below 0F yet some of his pure kaki survived so that does lower my hopes on Davids Kandy…

Mamuang that is good news I hope that as the trees mature cold hardiness will increase!!
Thanks for the report!

In NJ, the low was 0F, and we had an early cold spell. With windchill, we were in the negatives a couple times.
I have the following Kakis in the ground in zone 6 NJ:
Korea, Steiermark, Fuyu, Fuyu Imoto, and Saijo. Saijo fared the worst with significant dieback. Fuyu Imoto had moderate dieback, and Fuyu low/moderate dieback. Korea and Steiermark are very similar in growth habit- they grow tall and large. These two had very very minor dieback at the very top of the trees.

I have the following hybrids in the ground:
Nikita’s Gift, Sestronka, Kasandra, and Zima Kurma. I have two Nikita’s Gifts and both did not experience dieback (although some very small twigs did die, but I consider that normal). The others had no dieback whatsoever.

I have one Nikita’s Gift that bears well, the other not so much. Both do not receive fertilizer. I think the one that produces better gets more sun. I find NG to be very sensitive to fertilizer and rain events- both of which I believe causes fruit drop. I find NG to be more sensitive to fruit drop than other varieties. My other hybrids have not produced fruit yet, but I think I might taste them this year.

I find persimmon seedlings and new grafts to be very sensitive. They don’t like to be replanted, and they randomly die for no reason. I baby my new grafts in a pot for a year or two and do not risk putting them in the ground until they look well-established. When I plant, I do not disturb the roots at all. To me, it’s risky planting newly grafted persimmon trees and hoping they’d survive the first couple winters.

Here in Lancaster, PA my house is on the border of 6B/7A. Our winter wasn’t particularly cold except for several days when the polar vortex influenced the weather. One night dipped to -3 for a few hours and several other nights were in the low single digits without daytime highs above freezing for 4-5 days. All the PCNA’s (Tam Kam, Hana Fuyu, Gwang Yang) experienced some sort of damage on last season’s growth. Astringent persimmons had mixed results; Picudo and Tipo only had the tiniest weakest growth die, while all strong branches survived. Fire Crystal experienced more damage than PCNA’s, but I attribute that to its late season flush of growth. All are growing vigorously at this point, and the damaged ones seem to be recovering. I planted most in sheltered locations next to my house or evergreens in an attempt to shield them from cold wind.

@mamuang How did you protect your Nikita’s Gift? Maybe I should do that with my more sensitive trees until they size up. Did you give it a heat source?

@RUenvsci I’m surprised and concerned that your Saijo experienced the most damage. I got the impression that it was relatively cold tolerant, and planted one this year. Good to know that Korea does well there, though. I made some grafts of this variety that are leafing out.

I am impressed that your A persinmon like Fuyu survives zone 6 weather, esp. if unprotected.

@PharmerDrewee, the first year my NG was small enough that I just used a Home Depot 30 gallon leave bag. This was done in late fall when the tree went dormant with all leaves dropped.

I cut the bottom off so the bag was like a cylinder. I put it over the tree. Stuffed ton of dry oak leaves in the cylinder tightly. Cover the top with a tarp and secured it.

Did the same the second year but used some stakes around the outside of the bag to secure it from toppling over.

By the third year, the tree got taller andd it got harder to use the bag. I need to tied all branches together first so the could fit the tree. Needed two bags to overlapped. Needed more work to secure the whole tree.

Too much work so I decided this tree can either “grow or die”. So I stopped pampering it last winter. @galinas built a permanent structure to protect her Saijo. It is a much better protection that way but it won’t fit my location. ( or my skills

I am in zone 6 and my Saijo died the first winter while being wrapped in a heavy frost blanket. My Prok was unwrapped and survived however all the leaves shriveled black this spring (anyone know what killed it and caused it to shrivel black? It was unsprayed and at the top of a slope).

Saijo died but I also had wrapped an Iche Ki and a Hana Fuyu and both survived without any damage. Nikita’s Gift as well. I’m confused as to what happened with Prok and Saijo, they’re all in the same spot.

I have had saijo since 2013, and I thought moving it near my shed would help it’s survival. Didn’t help much… I now potted it and will bring it indoors in the winter. I purchased saijo thinking it would be suitable for my zone, but I can’t recommend it. It could be that saijo from other suppliers are more cold hardy. I had heard somewhere that there are several kinds of saijo out there…

I converted 80% of my Persimmon trees to JT-02 aka Mikkusu this year. This is the one hybrid variety suitable for my Z5 with the Rich tasting fruits. 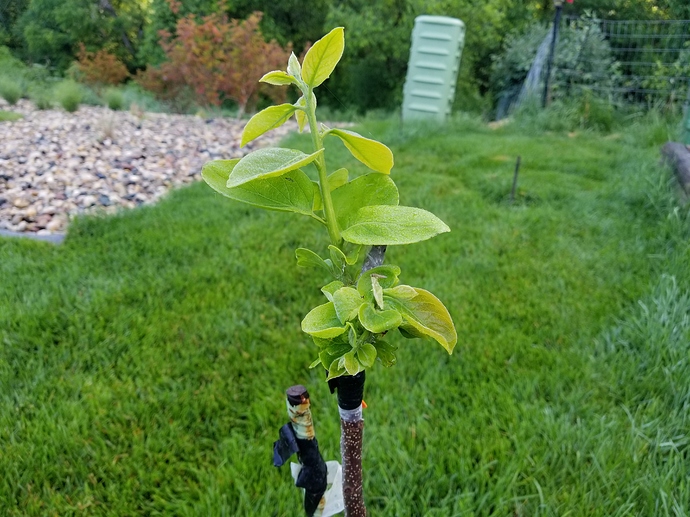 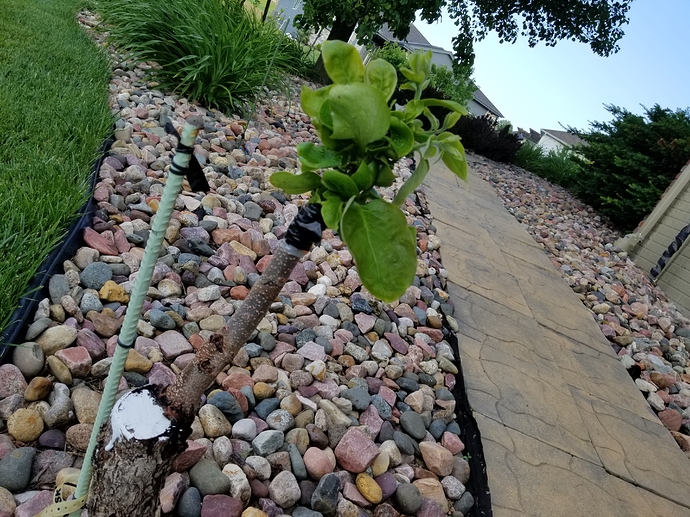 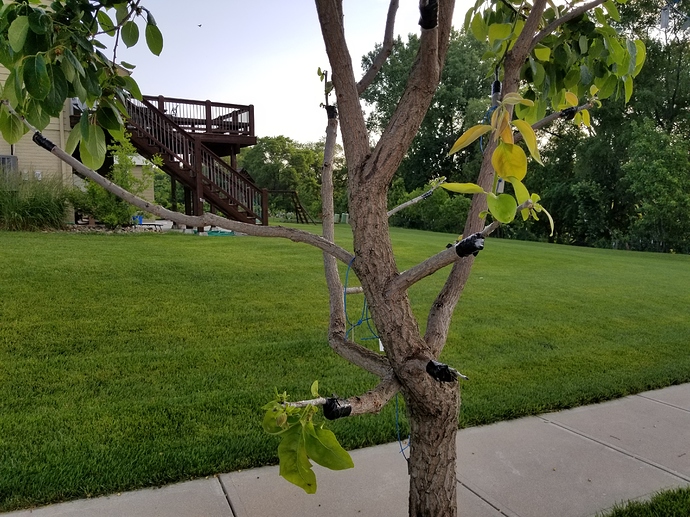 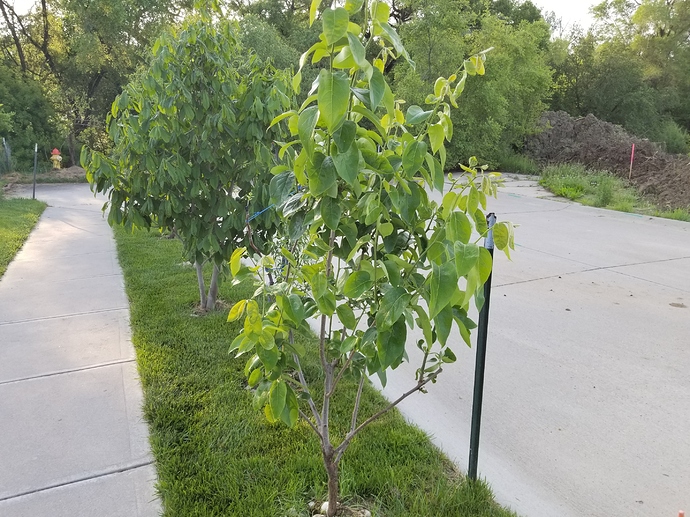 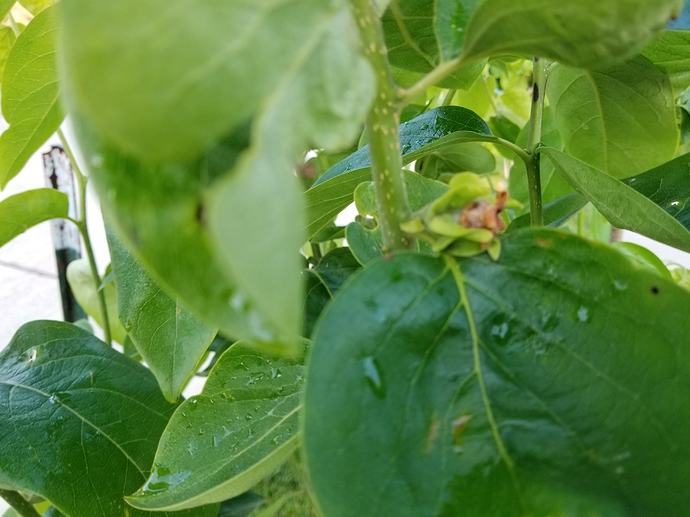 4 years old Kasandra. Top half died with the -20F this past Winter and making a come back. 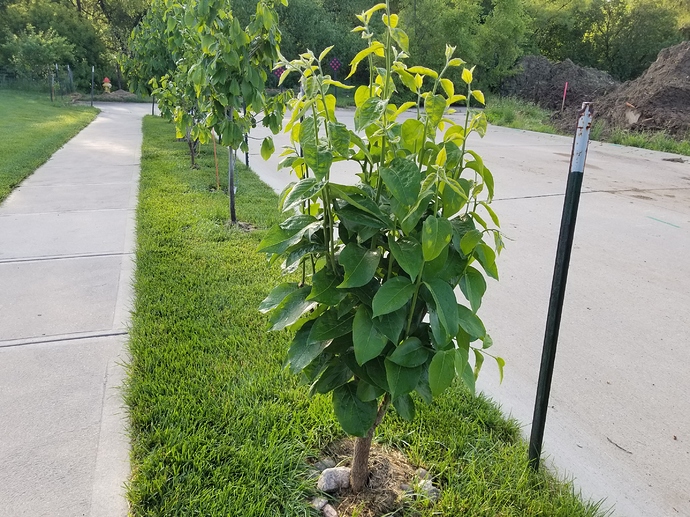 Yes. It looks like Ichi is even cold sensitive than Nikita’s.

Also agree that NF drops fruit at an annoying rate. I have so many flowers this year. If all dropped, I would be mightly disappointed. No fertilizer go near it. Not even mulch.

Get that pollinator going, Tippy! It’s supposed to be quite cold hardy. It should help with fruit drop.

the low was 0F, and we had an early cold spell. With windchill, we were in the negatives a couple times.
I have the following Kakis in the ground in zone 6 NJ:
Korea, Steiermark, Fuyu, Fuyu Imoto, and Saijo. Saijo fared the worst with significant dieback. Fuyu Imoto had moderate dieback, and Fuyu low/moderate dieback. Korea and Steiermark are very similar in growth habit- they grow tall and large. These two had very very minor dieback at the very top of the trees.

I have the following hybrids in the ground:
Nikita’s Gift, Sestronka, Kasandra, and Zima Kurma. I have two Nikita’s Gifts and both did not experience dieback (although some very small twigs did die, but I consider that normal). The others had no dieback whatsoever.

I grafted a lot pushing the limits this spring so next year’s report of this kind should be more interesting.

FYI, I have no male pollinators around but somehow my persimmons are mostly seeded. So, there must be males somewhere… NG has a very high fruit drop rate despite having seeded fruit.