Pick your pears at the perfect time

Picking pears at the perfect time has been discussed many times before on here. I found a couple of great articles while I was researching my own Bartlett harvest. Bartlett are very high quality pears when ripened correctly but can be grainy and coarse. I want to make sure i get the best out of the crop so a little additional research is just 15 minutes well spent. Here are the articles http://extension.oregonstate.edu/gardening/node/413 & https://catalog.extension.oregonstate.edu/sites/catalog/files/project/pdf/fs147.pdf & Recommendation for Harvest and Storage of Pears . I like this pear chart and make sure and watch the video at the top of the page Pear Varieties - . Raising Quality pears are somewhat dependant on who your talking to. One person likes Comice or another Bosc or Anjou. Some like sugar pears such as seckle. Many people love Bartlett because it’s flesh is soft and sugary sweet and dripping. Asian pear texture that’s firm and sweet is preferred by many that don’t like soft pears. I love all pears!

Thanks for sharing, Clark. Pear picking is definitely a game of finesse

I grafted about 10 Euro pears this year so the articles are very helpful.

In the Harrow series, they only described the taste of Harrow Sweet in detail. Nice to see it was rated “excellent” in taste. Harrow Gold sounds interesting.

This is some great info Clark. By picking the larger Orient pears first I was eating good pears 2-3 weeks earlier than when the expected ripening time. The flip side is that I left some of the smaller ones for a little later picking. Thanks, Bill

Size of fruit. Size is one indication of
maturity. Pears except Seckel should be
at least 2 inches in diameter at the
widest portion of the fruit. Pick the
largest fruit first, and leave the smaller
ones for another week.

Sometimes i’ll buy Bartlett at the grocery store and they never ripen correctly. Other times they ripen perfectly and are juicy and smooth…

My biggest problem picking pears at perfect time is that everything picks them before prime In particular my Asians. They can taste pretty good a month or so before prime. At my main residence I lost pretty much 100% of my Asians in 2 or 3 days a couple weeks ago. Hundreds gone, Between the Squirrels, Coons, Bears Hornets… 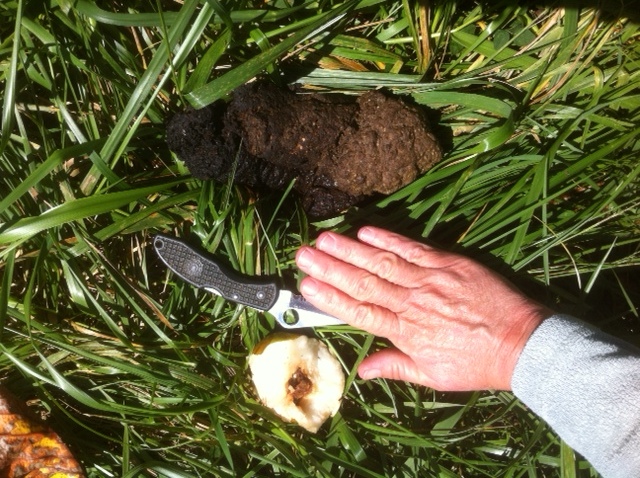 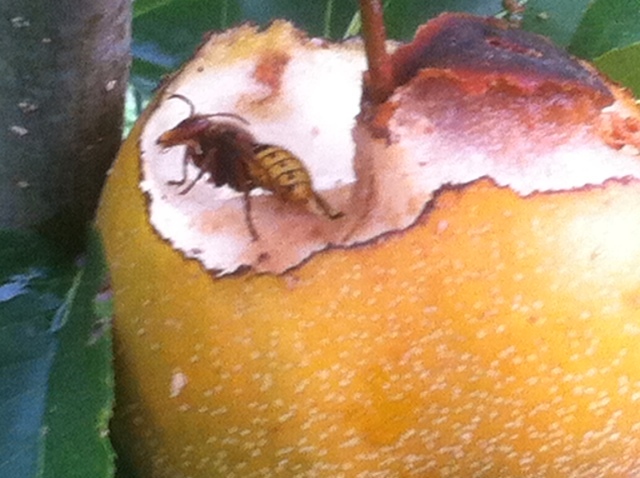 Wow that’s some serious damage on non ripe fruit. Might plant something they like better that ripens at the same time.

Can you build a 8 feet chain links fence around those Asian pears. I think that would help to protect them.

Maybe add a string of razor wire to the top or electric fence on top.

Warm,
By the looks of that poop pile by strudledog’s hand and Bears reputation I would be sleeping with one eye open there. I can see how it’s hard to raise fruit in that location. I’m guessing they are Black bears? [quote=“warmwxrules, post:10, topic:6804, full:true”]
We need robots. Drones that destroy. Motion activated. Armed with uzis and rocket launchers.
[/quote]

If there are bears it’s possible you are not armed well enough lol. I checked on grizzly bear range and experts say there are very few left in the United States Bearinfosite . I like them but would not like to live around them much. Once in awhile I read of someone having a run in with a grizzly in Montana.

I think some of those Bartlett pears that never ripen might be treated with SmartFresh (1-methylcyclopropane). It must work great for holding them in storage, and is fine for apples, but it can cause pears not to complete the ripening cycle.

Though I think SmartFresh does have some effect on traditional storage apples, which seem kind of frozen in their as-picked state, rather than changing in storage. A local grower treated their SunCrisp with SmartFresh last year, but not the year before, and I thought I could tell there was a difference in the flavor after a few months in storage.

It must be that. I’ve had it happen a few times. I think i remember last time the pears were from S America…they looked great…but they were hard and wouldn’t soften/turn yellow. Why even sell that crap.

Is anyone here picking Bartlett yet? The one paper above suggest aug 10th to 20th… i should look back and see when mine bloomed. I’ve got a couple dozen to harvest. Some are very big, some are small.

Well I will not be fencing with 8 foot chain link and the only thing even with razor wire it might stop is the bears and deer. and I really don’t really want the hassle of upkeep around pens and my wife hates chain link, and would kick me out Those pics from last year at my cabin plantings. I have not sighted bear at my main residence yet, but plenty other unwelcome fruit lovers. The bear really tore up the trees which bothered me beyond the fruit loss. I don’t really hunt anymore but for $19 I can harvest 12 deer 2 bear and 3 turkey What a bargain. Yes only Black bears here in GA, but a very healthy population around my cabin in the Cohutta Wilderness Area

Thanks for posting this. Just in time for my Moonglow harvest.
I only have a few pieces a year from the branch I grafted many years ago. I still haven’t figured out when is the best time to pick. I just picked 3 pieces a few days ago when they broke off easily when I tilted the pear. I didn’t know that these need to be chilled until I read the article you posted. I’ll put them in the fridge right away. Thanks again.

One thing you can at least do something about is the hornets. I had really bad hornets for a couple years and got some simple traps baited with fruit juice. I think I trapped them out 100% last year, I have had zero European hornet sightings this year. But there are other kinds of bees taking their place so I am going to put out my traps this weekend.

Just started noticing them here the past 2 days. Going to go get some traps. Last year they were really bad. Attacking my late ripening pluots.

Normally, I expect them at pear-drop time - that’s when the larvae production ceases

I have a lone Shinseiki pear which I think may be close to ripe but I have no clue how to tell. It’s not very large but it’s color has gone from green to a yellowish green. I suspect it may be time to pick it. It’s my only shot at getting it right.