Rosseyanka no way. Of course no way, Nikita’s Gift. Rosseyanka died back to one or two buds two years in a row and after last winter’s polar vortex which I was near the bullseye of and hit -30 it didn’t come back for its’ third year. The prior two winters were typical zone 5 winters here. -12 I think both years actually.

I have at least 6-hybrids planted middle summer to see how they do over this winter. No protection, simply mulch & caged of course. Very well caged.

I’m trying:
Gora Goverla
Gora Roman Kosch / Gora Roman Kosh
Gora Rogers
Pamjat Pasenkova
Super Rosseyanka (I’m sure it’ll die as it’s a bud mutation of Rosseyanka.)
Sosnovskaja
Chuchupaka
JT-02 - I planted 2. JT-02 I grafted in a raised bed where I raised seedlings. It grew to 4’ easily from the first leaf of growth. I got to learn that it survived -33 F last winter… every other bud didn’t grow and the others grew almost exactly 2" each. Then a month or a month and 1/2 later it reshot from just above the graft union on both of my (2) grafts. It shot straight up too so it formed the perfect new specimen. One plant grew (3) leaders and the other grew (1) leader. The distribution of total growth comparing each was identical. Same thickness seedling, same resultant vigor. It was very interesting to see… and I informed Cliff England of the entire experience.

I’m in a great location to see which are zone 5b hardy. My Mom remembers the weather here and she says it rarely ever went to -20. Since I’ve been at where I lived 11-years and other than that polar vortex, it went to -18 one winter and about the same one other year. That’s one night so not enough to do any serious damage would be my opinion.

What I meant to ask wasn’t whether any of the hybrids would be winter hardy, but rather if they survived the winter (with or without protection), whether you’d then even have enough growing season for the fruit to mature enough to ever ripen? Are you confident you’ll be able to produce fruit if you can get the trees to overwinter?

I certainly hope your experiments reward you!

I understood you perfectly (they were planted this summer.) I just don’t yet so it’s sort of a big deal for everyone.

Yes you are correct, out here in the prairie states the spring comes earlier and the summer is hotter than out east with much more intense summer sun. Here in south central Kansas the spring comes 3 weeks earlier than 8 hours straight east of me in Missouri. I can plant tomatoes usually between april 15 to 20th where in MO its more like may 5 to 10th. I read that it may be even later in places like KY and W.VA on the plantmaps.com info.

Yes Dax what you are doing will really add new info for z5 growers!! It will be interesting to see what the results tell us 5 years down the road! Which are hardiest, which are earliest ripeners, which are best for z5 etc. I think JT-02 sounds like a winner for z5 and should ripen early enough even in 5a to at least pick when orange and ripen indoors or even to let them hang into 20sF weather before bringing indoors. Ive frozen half ripe astringent fruit that is still partly bitter and used it in our family persimmon malt tradition and it is fine with no astringency that way though it had some when frozen. I hope to test and preserve those all here at my z6 kansas location.
BTW here is our tradition:
Freeze some persimmons. Probably best to peel and de-stem first, but we usually do that rapidly under hot water when frozen leaving the core frozen, and then place frozen (knived in half for easier blending) fruit in blender until half full to 2/3 full or so, then add some milk about halfway to 3/4 way up the fruit and blend until creamy, then if you want you can add a tablespoon of white sugar if you like! Then enjoy the most amazing creamy delicious imaginable!!! Valued at $100 per glass!!!

Dax
Did you keep some of the Hybrid persimmons in the greenhouse just for insurance?

Yes. I have one of each and a two of one cultivar I believe, but, I didn’t have one of a cultivar above listed.

I did however hand over big excellent (the best of my grafts or equals) to a friend barely south of Columbia MO. They’ll never die there and he’s the city horticulturalist. He promised me he would cage the grafts with rabbit caging or hardware cloth.

I also know where some of my grafts on that list went and will have scionwood access if necessary.

No. The Kazas did not make it at -19F for me but Jerry Lehman 400-5 Hybrid male did. I grafted to 2 trees and I will cross this male to JT-02 in a near future to create another hardy Hybrid persimmon. I have been trialing cold hardy persimmons for the last 13 years and now I found the JT-02 aka Mikkuso survive my Z5. I went out yesterday to make the inventory of my JT-02 and I found 10 of them . I thought I only got 7. I was happy with new numbers. The future is looking good.

It sure is, Tony.

Randomly curious, since I plan to graft JT-02 down the road… With all the top working you’ve done with multiple cultivar combinations, have you noticed if any of the interstems have inhibited or induced more vigor or precociousness? i.e. Like JT-02 growing faster or fruiting more heavily on Prok as opposed to NG or Yates?

The JT-02 grafted onto the large Rossyanka interstem and all the 2 years old seedlings grew fast. The seven scions grafted on the bottom half of the 20 feet tall Prok grew only a foot. I think the lack of sunshine or more sap flows to the top half of the tree.

Can those who know tell me if this is a Prok? 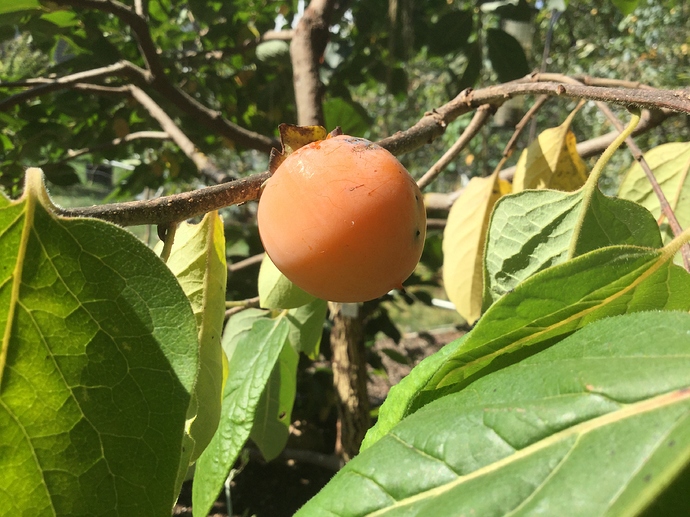 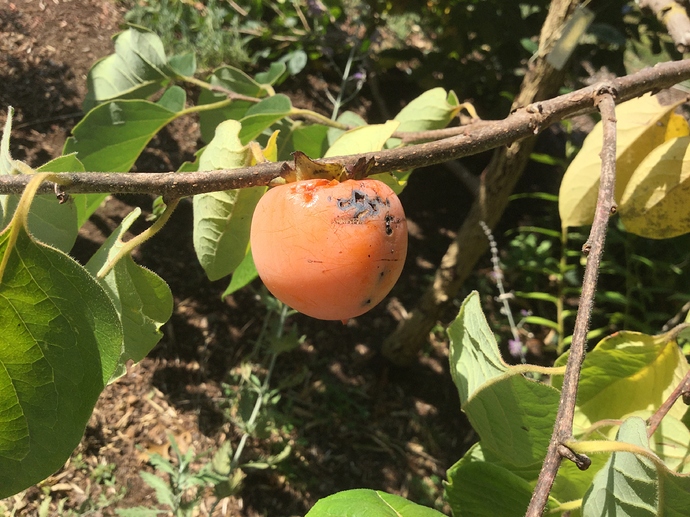 Thanks, Tony. This is my first ever persimmon fruit. I grafted this Prok on my Nikita’s Gift two years ago. It set fruit the same year as the 6 yr old NG !!! 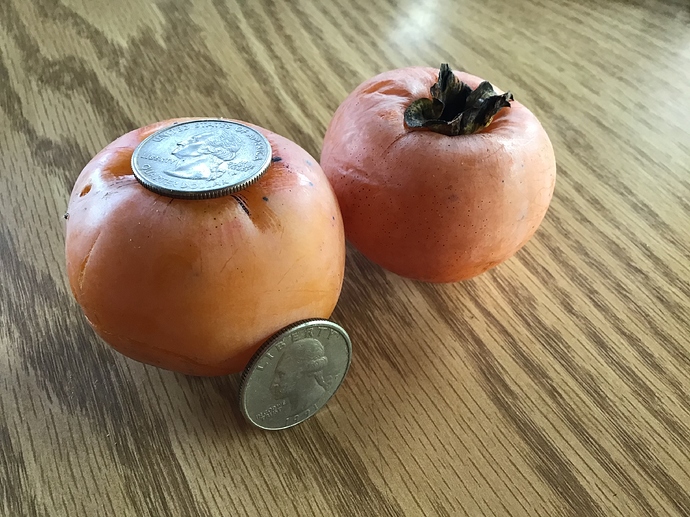 I have a Prok tree that seems really late this year, too. Normally I wouldn’t have any fruit left by this time, but not even half the fruit from the tree has ripened yet. I have another little Prok tree that also had a big crop this year (for its size), but the last fruit on it ripened a couple weeks ago. They’re in slightly different micro-climates, but it seems weird for there to be so much difference in ripening time between the two trees.