Before you proceed keep in mind propagating autumn olive is illegal in many states because of it’s tendency to become an invasive. They fix nitrogen giving them the ability to grow where other shrubs cannot. You may not have heard of such varities as cardinal, amber, jazzbo, ruby, charlie’s golden, redwing, brilliant rose, delightful. When you take cuttings 6 inches is best of new wood. Strip the bark back to the green calcium layer on 2 strips on each side of the cutting and dip in rooting powder, gel, or liquid. Leave only the top 2 leaves on the cutting. It takes 70 days to root them. Many varities are already lost due to the fact they have became illegal in locations where they were grown. Control humidity by using a mister. The cutting can go in a bag or turn a jar over on top of the cuttings. Use the growing soil of your choice and keep them moist. Put the cuttings in a shade house or a shady part of the property e.g.under a large tree to keep the cuttings out of direct sunlight .

Articles like this are now common "Originally introduced to the USA from Asia in the 1830’s, for many decades it remained well behaved. In 1963 the heavy-fruiting cultivar ‘Cardinal’ was selected by the USDA as a superior, larger-fruiting strain for soil stabilization, highway screening and wildlife cover. Unfortunately, soon thereafter it began multiplying explosively; it quickly dominated major open-field areas, began out-competing native plants and it is now considered one of the most invasive plants in much of the USA.

Autumn Olive can grow 6 ft. or more in a single season, maturing in only a few years as a thorny multi-stem shrub 15 ft. or more high and wide. Leaves are 2-3” long with wavy edges, green above, showing their silvery undersides when the wind blows. Sweetly-scented ivory-colored flowers in early June produce a proliferation of small red fruit in late summer, often persisting into winter, a favorite food for birds and other wildlife. A single mature plant can produce 25 or more lbs. of berries each year! Because its roots grow nodules that convert nitrogen from the air into a form usable by plants, it thrives in even the poorest and driest soils, rapidly forming impenetrable thickets that even deer avoid browsing.

Controlling Autumn Olive is challenging because of its fecundity from seed growth, ability to re-sprout from cut stems and re-grow after fire. Young seedlings are relatively easy to pull out by hand, but with older plants, roots broken when are pulled will grow into new plants. Germinated seedlings can reach 3 ft. or more by fall, some even producing fruit as year-old plants. Severe infestations can be treated with herbicides, but the vigor of the species often renders these results ineffective.

Despite its invasiveness, certain features of Autumn Olive are considered favorable in some situations. This is a plant that grows where few other plants can survive, stabilizes steep slopes, forms windbreaks in desolate areas and produces cover and edible fruit for wildlife. Its nitrogen-fixing roots help improve barren soil fertility, and the late-spring flowers are very pleasantly fragrant. Its copious, astringently-flavored fruit is attractive and very high in carotenoids, especially lycopene (17x more than tomato!) and Vitamins A, C and E; for generations many Asian people have relied upon the plentiful berries as a valuable resource to make flavorful juice and preserves.

Selling or transplanting Autumn Olive plants is prohibited in Massachusetts and many other states where it is proven to be an invasive threat to native plants, and rightfully so. But the species has already become so ubiquitous that its colorful display of silvery-red fruit is the predominant sight in so many open areas, along roadways and at the edges of woods this time of year.

If you see it sprouting in your yard, try to remove it before it establishes and starts seeding-in. You will need to be diligent to identify and dig-out small seedlings before they become difficult to remove, surveying your garden every year. Some have suggested (tongue-in-cheek, perhaps) that you emulate Eastern traditions and employ a defensive action to “reduce” the seed population – try picking the berries and converting them into your own homemade “Invasive Jelly”! - https://www.westonnurseries.com/autumn-olive-a-challenging-species/
"

I am glad you included cautionary information. From my experience, autumn olive/ Russian olive should be lumped in the same category with Asian carp, kudzu, nutria, and emerald ash borer. I can’t begin to explain the work it takes to control these invasive shrubs. I can only speak from experience on my property in Michigan, but I would avoid these plants at all cost. If you must try them, come to my property and take a few thousand, please. I do thank Clark for a great deal of information. I have lots of pears planted because of his posts.

When we drove to Silver Spring MD from western KY, two weeks ago, I was noticing serviceberry trees in bloom all along the interstate in West Virginia. But… on the return trip, a week later, it was evident that every open space in the entire state of WV is covered with Autumn Olive (an exaggeration, but not much of one). It certainly reminded me that I need to redouble my efforts to eradicate every one I find growing around here on the farm!
Talked to a friend whom I’d not seen in a couple of years, yesterday. Her husband is a fishing guide… she said the Asian carp have so overtaken Kentucky Lake and Lake Barkley(the Tennessee and Cumberland Rivers that confine Land Between the Lakes) that crappie fishing is gone… he’s having to take fishermen to Illinois to find decent crappie fishing sites.

When I read a discussion of “native” vs “invasive” plants I wonder what “native” plants are being replaced by the invasive plant and why are the native plants more desirable than the invasive plant. In the case of Autumn Olive it’s nitrogen fixing, provides food for wildlife (maybe not good if the wildlife is not desirable) and is considered a health food for humans.

Just reading the title gave me the shivers. In the first home I ever lived in, autumn olive was declared enemy #1 and we spent most of our time fighting it along the perimeter of our lot.

Everyone says invasives from their area are terrible and I believe them but even my winenerries are now 100% dead. Kansas is not an easy place to raise things. The wineberries did not establish fast enough I will need to try again. Autumn olive is not invincible here.
Wineberries

According to ONE GREEN world…

there are 6 states they cannot ship to.

My state has no restrictions on anything hardly (except alcohol via USPS/UPS, etc).

How about that! In Western Oregon it’s not invasive at all. Nada. I have an ‘Amber’ Autumn Olive that has never misbehaved.

i just planted 4 rooted cuttings last fall of named cultivars of A.O i got from fruitwood nursery in my yard. our cold weather seems to control thier vigour somewhat. even getting some dieback in -30f temps. its legal to grow them here. ive heard in the sandy soil of the southeast coast in z5 and warmer they are a problem but not up here.

Same here they might adapt someday but so far they are not having any luck. The elm, multiflora and honeysuckle are a big problem here. Autumn olive I can eat but what good does poison oak , ivy , and sumac do us? I would take autumn olive over all that scrub any day.

I recently ordered some named Autumn olives and much to my surprise rolling river now goes by a different name which is plantingjustice. As i said before Keep in mind these plants are an invasive in some states Buy Punch Bowl (Organic), Autumn Olive (Elaeagnus umbellate) | Planting Justice

My order is shown below

In addition I have 50 or so Amber cuttings I’m trying to root.

yes. they were bought out. fruitwoodnursery.com is the original owners. thats where i got my rooted cuttings of my A.O. all 5 of which took after planting out in sept.

I’ve been keeping amber autumn olive wood in the refrigerator. I know the woody stem of autumn olive reportedly makes them difficult to propagate. Im going to attempt to grow them in a shady location. Im using rain water and rooting hormone as the dipping solution. I drug the ars pruners up and down the stems since they are notoriously difficult to propagate by cuttings. That exposes the cambium layer giving me more chance of success. I used multiple stems in each cup expecting 90% failure. Sealed them in a gallon ziploc bag to control humidity like whats typically done with a misting system. I trimmed off the tops of the autumn berry leaving one or 2 leaf sets only. Today is may 16th so we would expect 70 days from now roots will begin to develop if everything else is ok. We will check them for roots on the first of August or so. My understanding is that Hidden Springs nursery in Tennessee spent over 20 years working with Autumn olives developing many new types but was eventually told they could no longer propagate the plants. Hector Black had a great deal of time invested in that project. These plants are perfect for dry locations and places with poor soil where they are not an invasive. To bad a sterile plant was not made that could be propagated by cutting only. These berries have to much to offer to forget about them. In areas where they are invasive the best thing to do is gather all fruit and eat it. 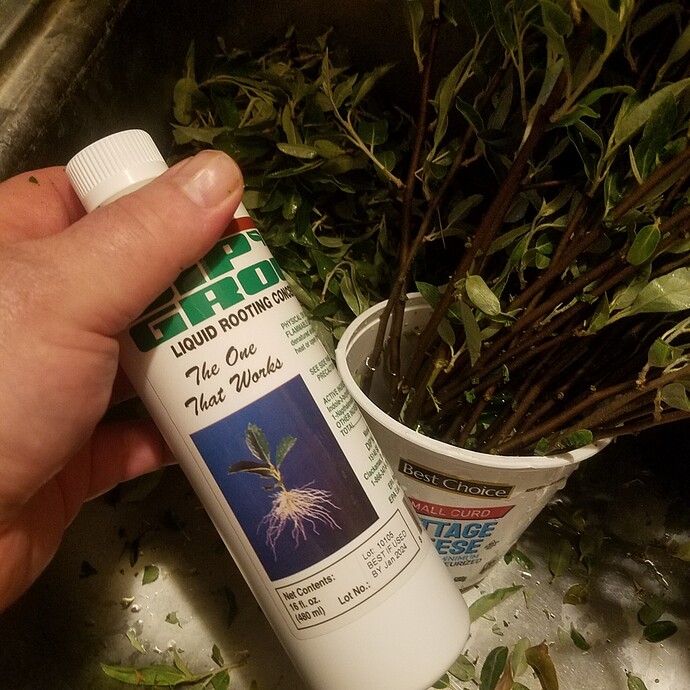 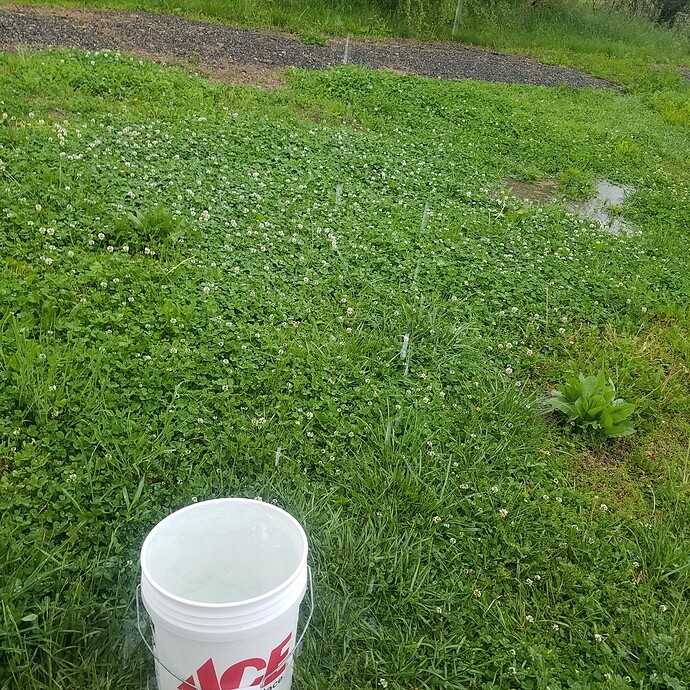 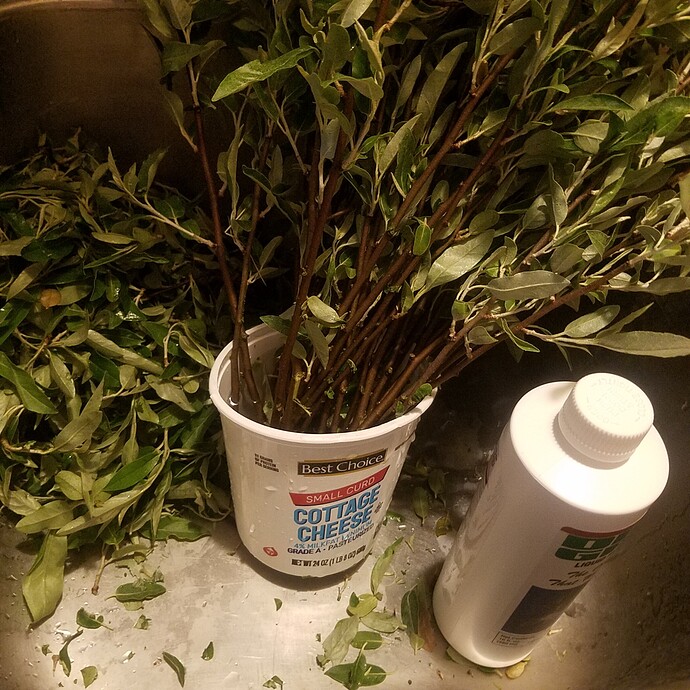 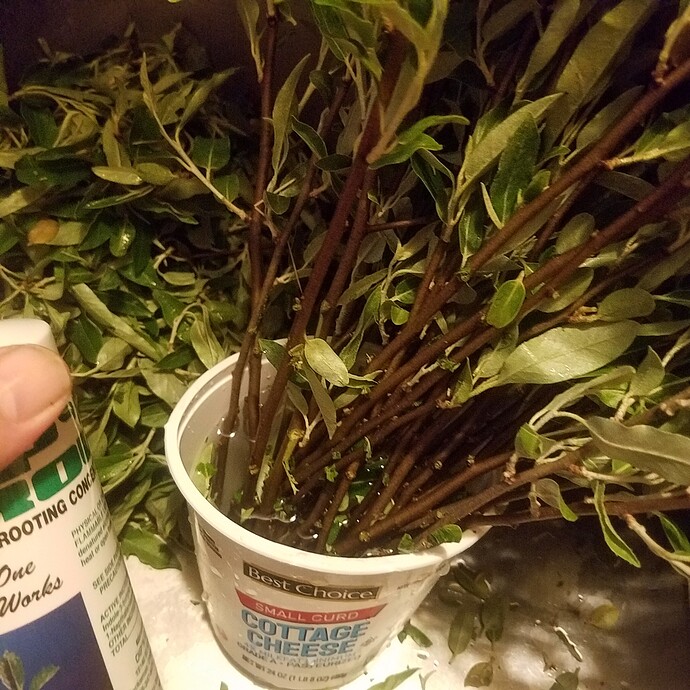 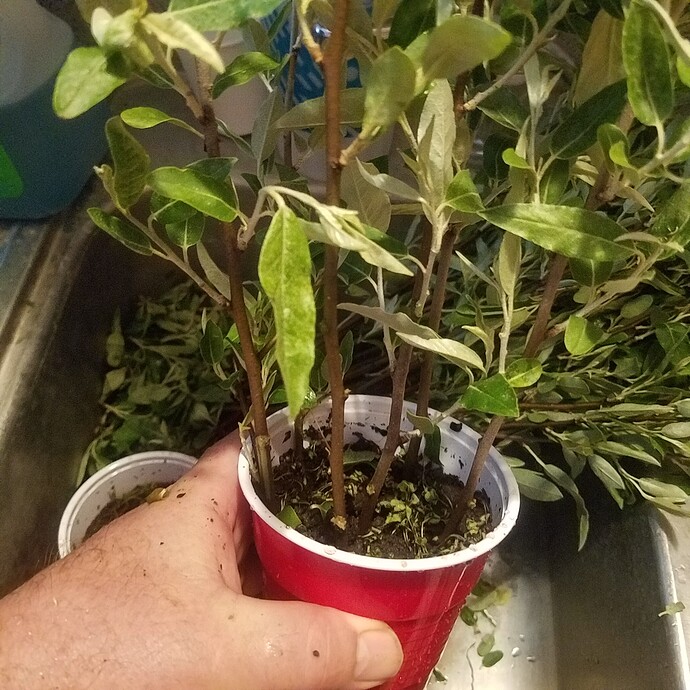 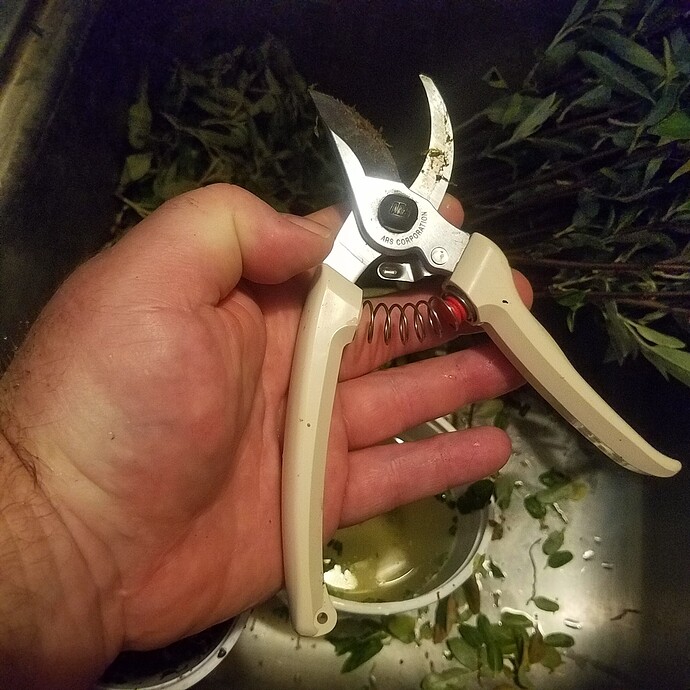 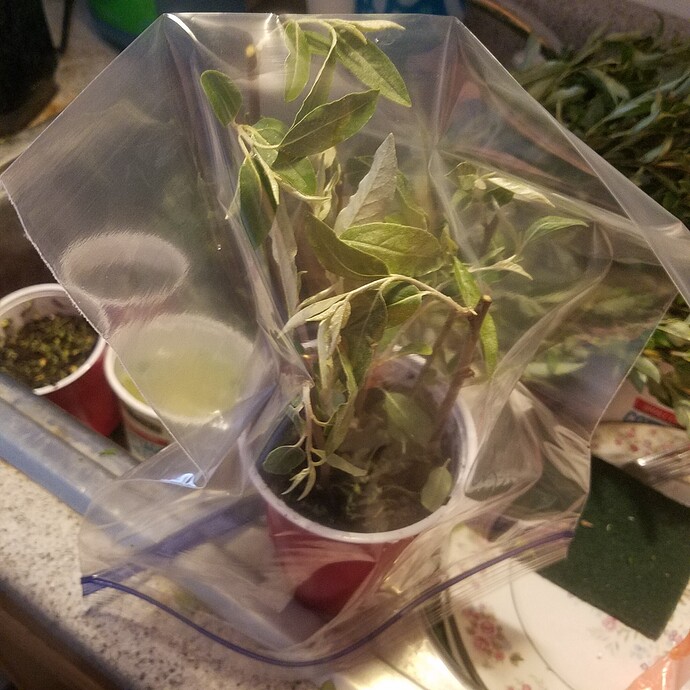 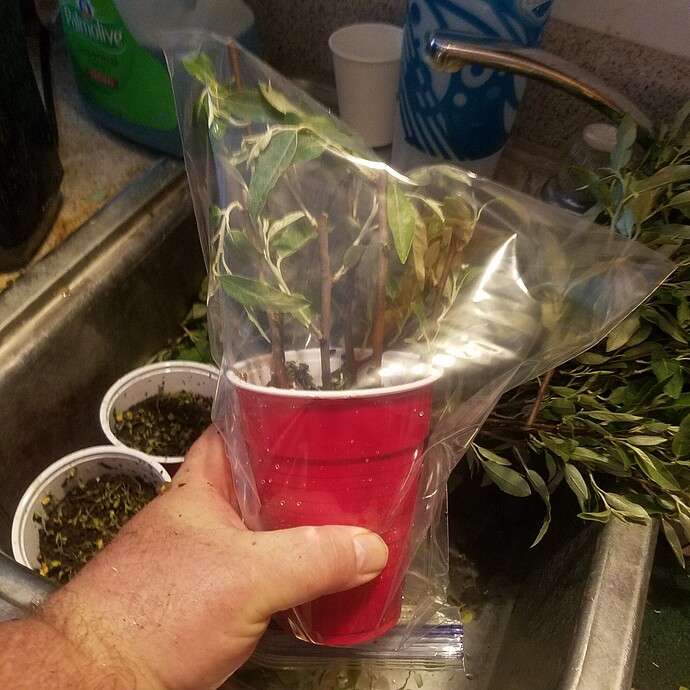 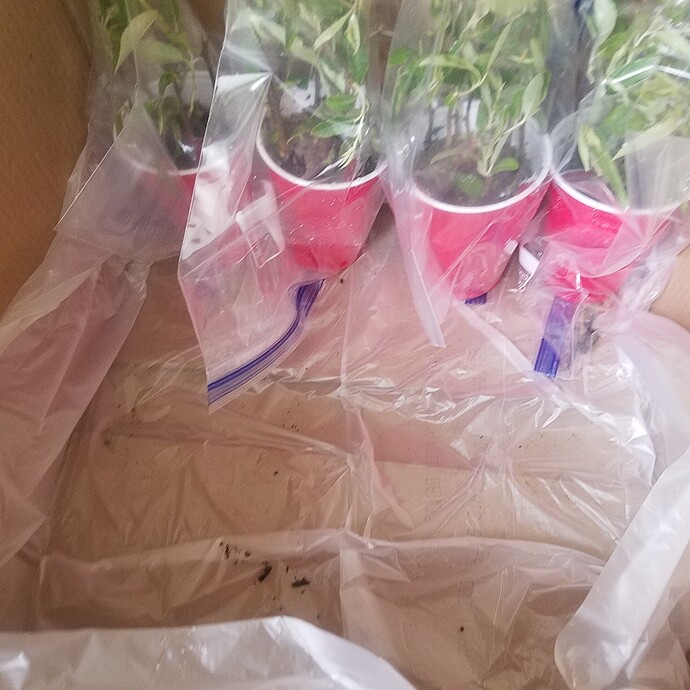 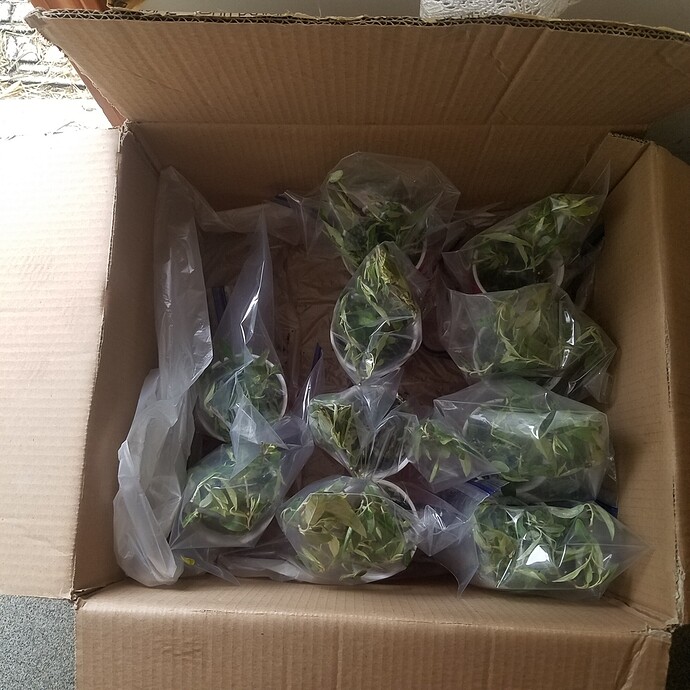 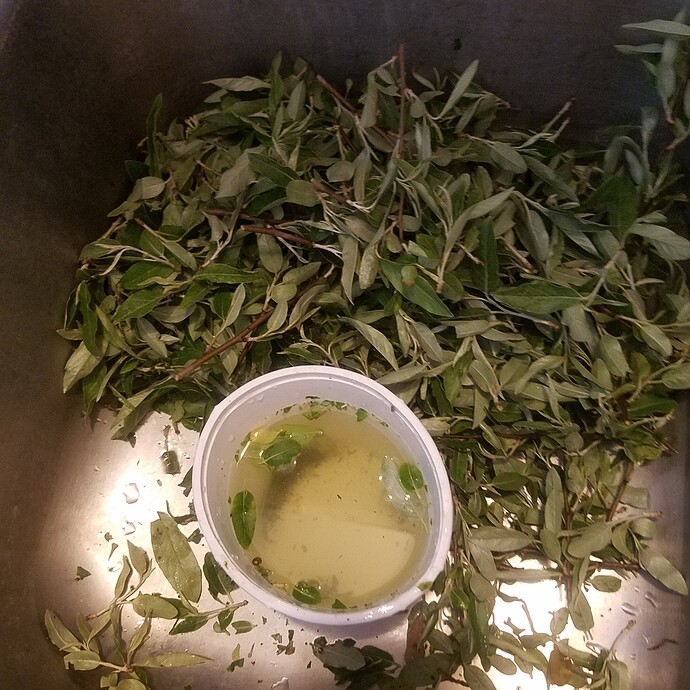 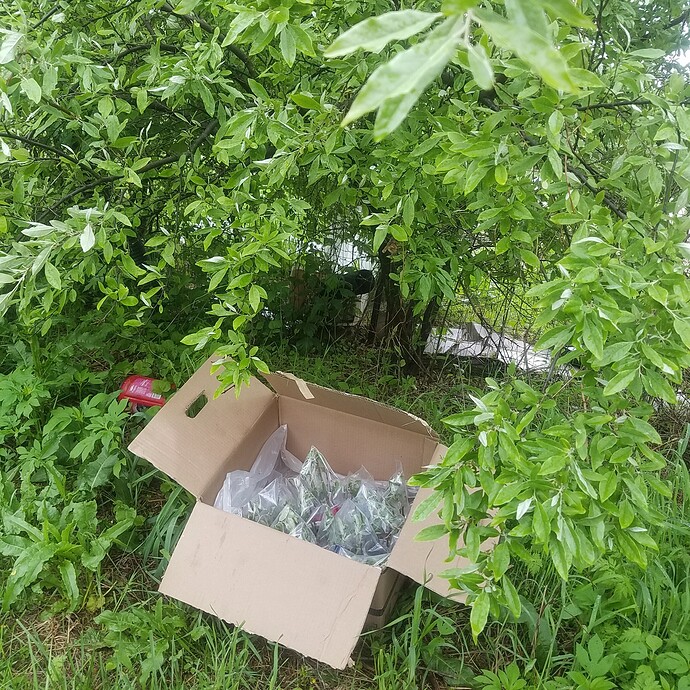 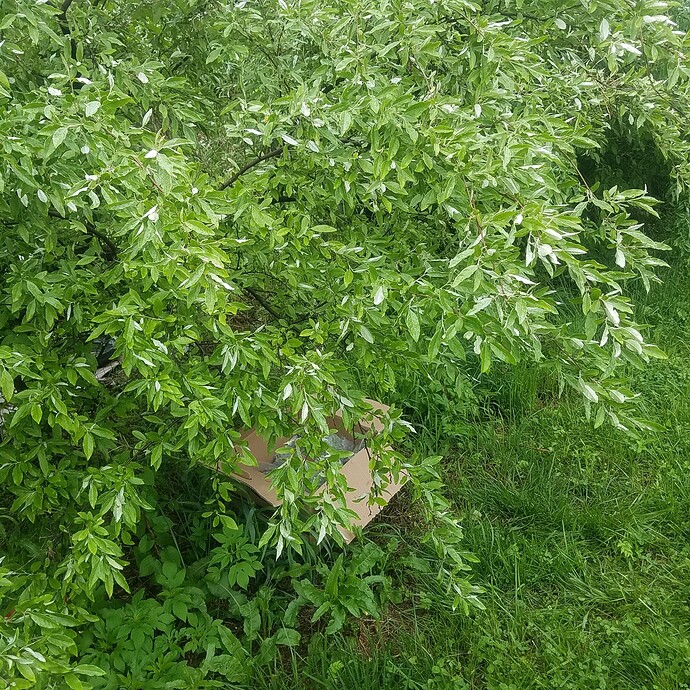 Your point about Hector Black was not lost on me when I saw all the autumn olives he developed. Even though I live in Tennessee I may or may not have purchased several plants from a California nursery attributed to Hector Black so they are not “lost”. Seems assanine to have to order from across the country when I have actually driven to Hidden Springs nursery (about 1.5 hours from me).