I recent bought a potted apple tree. I want to cut it off at about 2 feet high, but it looks like most of the lower buds have been rubbed off. I think one side doesn’t have any left. So, I ended up leaving the tree taller than I wanted and using some of the existing branches. 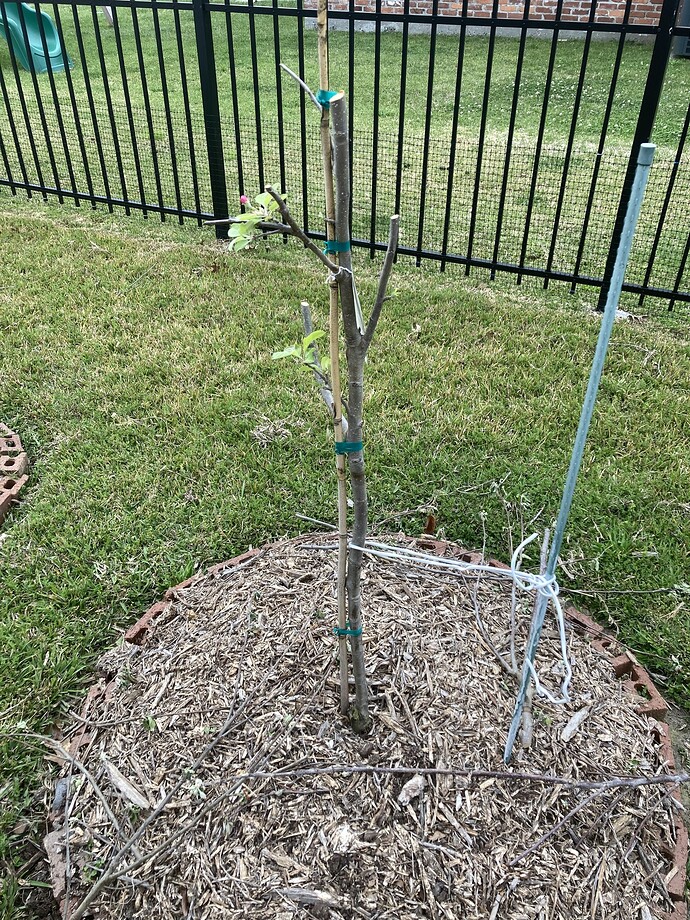 Now is your best chance to get the tree at the height you want. I have not had much problem with apples breaking buds below my initial cut. You could keep the lowest branch as a bit of insurance and see what breaks below it. The upper to branches have fairly acute crotch angles anyways. I am by no means an expert.

Apples will find or create buds you don’t see.

I have lost a few trees over the years with deep cuts to the main trunk…especially after they had new leaf growth. Fully dormant probably less an issue.

Did you seal the cut? 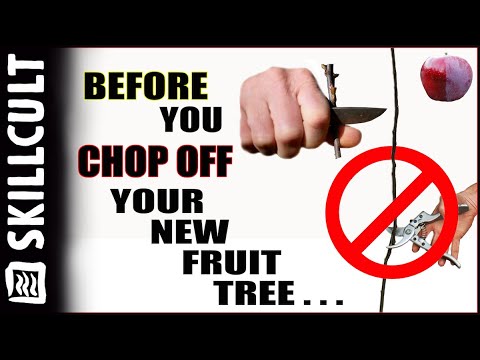 I’m going with this plan for my 7’ tall (almost a whip) pear that I brought home from Lowes this week!
Worth a try . . . I botched a few of my apple trees and am trying to fix them, now.

Does the tree have more than one variety on it?
Don’t remove one of the varieties.

Sealing the cuts is not recomend

Why do you want to cut it down to 24 inch height? How tall is it now? Looks like the bottom branch is about two feet high(?) Maybe you could cut down to just above that bottom branch? The trunk diameter looks pretty large for a feathered whip(?) What kind of rootstock, and what variety? Is it from a local nursery? Are you wanting to graft some other varieties onto this tree to make a frankentree? Graft just one new variety onto it? Maybe the nurseryman who sold it to you would have some ideas or advice(?)

Seeing as smaller trees both typically are cheaper and live better…
some foresight might have been good?

Thanks, I was not entirely sure. I have sealed mine and it works well.

Thanks everyone. I decided to just cut it under 2 feet. I live in a small neighborhood yard that already has to many trees. In the long run, small trees will be very important. So, if this goes poorly I will just replace it and try again.

Just curious, what rootstocks it is on? If your goal is to keep it small/short, having a right rootstock helps you win half a battle already.

Not sure, it wasn’t on the tag.

Thanks, you were right. Its got plenty of new buds now.

Thanks for reporting back.

A tall, skinny Moonglow pear that I found at Lowes did not have any rootstock info on its tag, either. (they never do.)
However . . . I actually was able to track down the nursery that grew it and actually got a real person, who actually was able to tell me what rootstock they use for their pears. Calleryana. I’ve never grown anything on that, before. Not sure it will be a great choice for Virginia . . . But we’ll find out!
The good news is - Supposed to tolerate wet soil.
The bad news - Calleryana is slow to produce fruit.
Anything to add?

I don’t use this rootstock. Clark @clarkinks is a proponent of using callery rootstock.

Most of us know callery pear can be problematic is certain areas for the same reasons I like them. They grow where other trees will not, they can survive both drought and heavy rains. Digging up the wild rootstocks is a bit of a pain but if your like me and have an area you have problems growing pears and they are not invasive in your state you might try them. These a friend and I dug up the other day are going into wet heavy clay that a domestic pear will not grow in. Fortunately I had my frien…

Callery is the seedling of BRADFOR pears.
I top-worked one last year and grafted 5 varieties to it. At least 3 or 4 of the 5 are going to bloom …or are blooming…both European and Asian pears on the one tree.

Edit: Added a 6th graft to the tree. May do more.