I searched a bit but couldn’t find a thread specifically talking about rooting citrus.

It looks like I might have successfully rooted some twigs that came attached to satsumas at the grocery store, though I haven’t checked for roots yet, I’m just going off the amount of new growth. This is what they looked like in the store about a month ago: 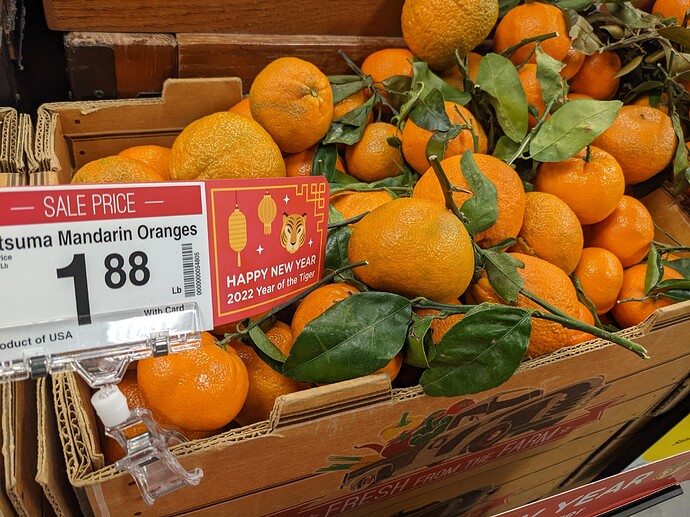 I trimmed the leaves a bit, stuck them in soil on a heating pad under a humidity dome, and here they are today (notice a flower bud!): 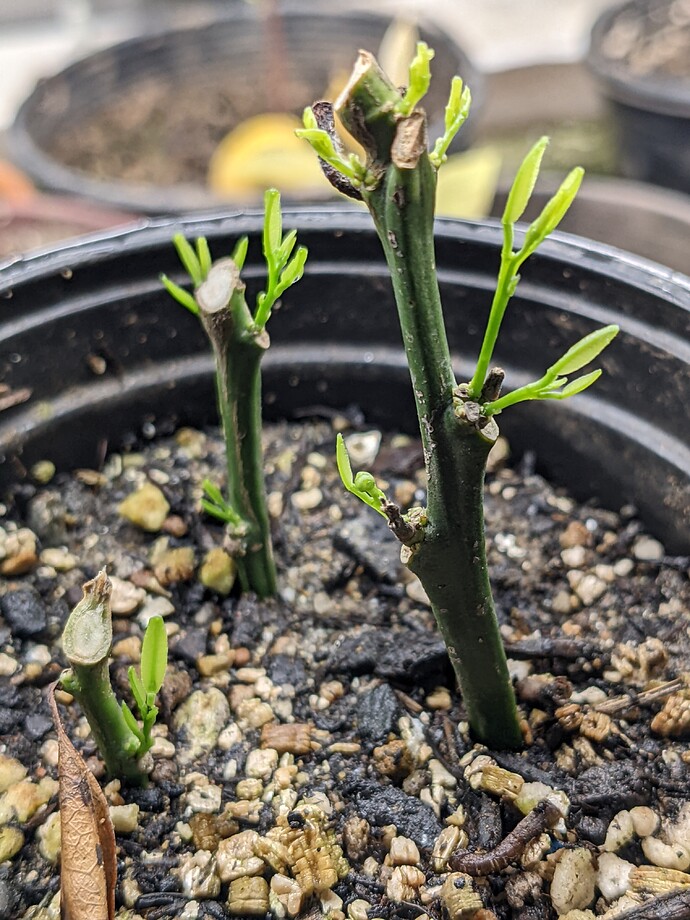 They held the leaves until the new shoots emerged, and dropped the old leaves at that time.

What’s the chance these are rooted, or is it likely they are just expending the last of their energy before they kick the bucket?

I have rooted citrus cuttings successfully before. They root slowly, vegetation can grow without roots. Some citrus roots better than others. Some can take years to become a well rooted plant, and others root well sooner. I forget how long the roots actually take to start forming, yet the faster to root ones I estimate took about 4 to 6 months to have roots. Out of curiosity what kind of soil did you use?

Out of curiosity what kind of soil did you use?

I keep a pile of my own “potting mix” at the end of one garden bed that’s an ever-changing ratio of native soil, municipal compost (food & yard waste), sand, perlite, vermiculite, and the stuff I scape off the sidewalk under our large fir tree (decomposed needles).

I stabbed some prunings from my Yuzu into the ground next to it, and something like 18 months later it still had green leaves, although not growth like that. I was sure it had roots, but when I went to transplant it, there was nothing.

Satsuma not easy to root. Likely sprouts growing off of scion rather than roots.

Good to know. I’ll keep them covered for now and post an update if they die or when I transplant and check for roots. In the meantime I’d love to hear about others’ experiences rooting various citruses!

Limes and meyer lemons are often sold as rooted cuttings. Others, not so much, although the Frost series of mandarins(Orange Frost and Arctic Frost) where originally sold as rooted cuttings. The current patent owners are selling them grafted. The “Frost” label isn’t accurate as they haven’t proven to be more cold hardy than any other satsuma. It did however sell many trees in areas in Texas too cold to grow edible citrus. Most were killed in the February 2021 severe freeze. Arctic Frost satsuma mandarin hybrid named new Texas Superstar - AgriLife Today

I saw various mandarins sold in Seattle’s Pike Street market a few years ago with attached branches, buds and leaves. Althoug tempted, I avoided buying any to bring back to Texas which would have been illegal. BTW I see buds in your cuttings which could be successfully grafted. An easier way to propagate satsuma and other mandarins is by seed. The fruit of most mandarins come true to seed.

I did also graft a couple and germinated some seeds! I just had more sticks than stocks, so to speak, and figured it couldn’t hurt to try rooting the extras.

The two grafts I did still look green, but no bud swell yet, even though the other branches of the seedlings I grafted them onto have started pushing new growth.

The seeds haven’t sprouted yet either. I was surprised how few seeds these had compared to other “satsumas” I’ve bought in the stores here. Only one or two per fruit. They were also a bit larger and had a milder flavor, so it’s possible they aren’t even satsumas at all, and were just mislabeled generic mandarins.

Here’s a photo I took of a couple of the fruit with a photo scale: 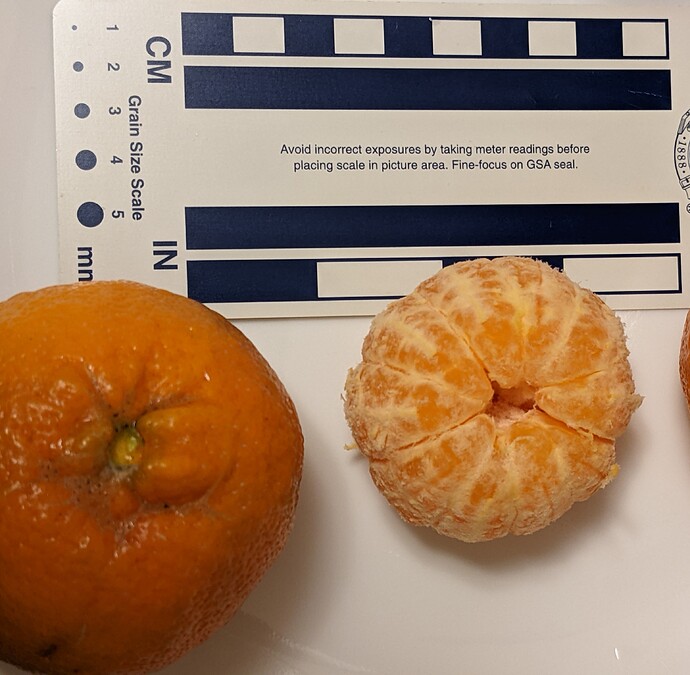 Ordinarily, the roots are a mirror image of the top of the cultivar. So you might have just discovered something really good. The only problem I see is that the cuttings will grow like a standard tree eventually and not a dwarf whose root stock limits it’s size. That flower bud is a tale tell sign of root growth. I’m nevah more than partly right about these things but that does look promising.

Last year I took some cuttings from some of my northern high bush blueberries, treated them with root hormone, stuck them in a pot of sand under a clear plastic dome in the shade and got three out of seven rooted. They are in the blueberry patch now showing new growth. Pretty exciting.

Only one of the three cuttings is still alive, but the leaves are painfully pale. I’m guessing still no roots. I gave it a little highly diluted fish emulsion to see if that helped, but no signs of improvement. 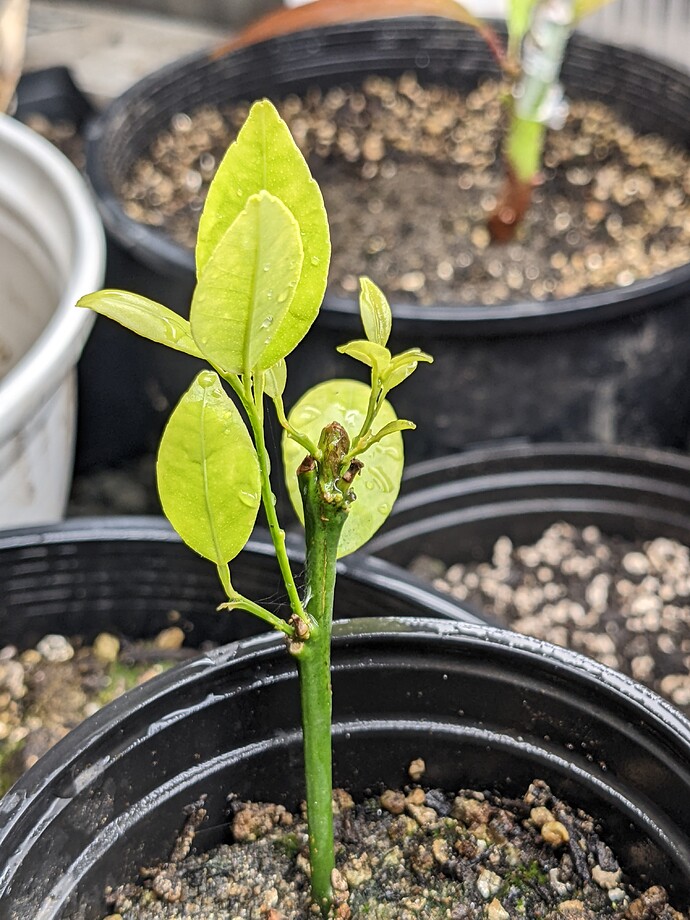 Just potted this one up in anticipation of warmer weather ahead, had rooted pretty nicely: 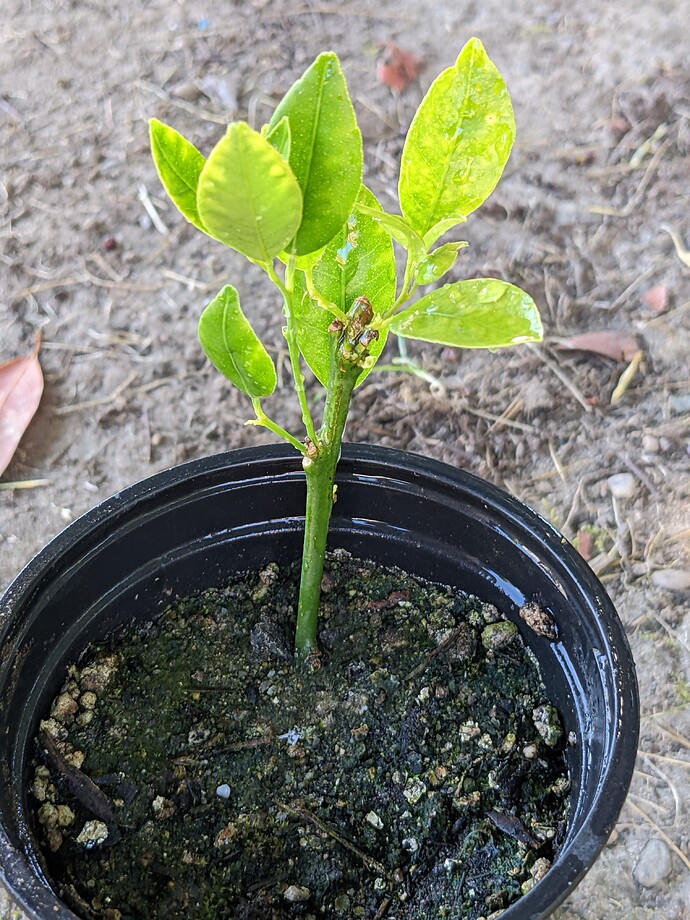 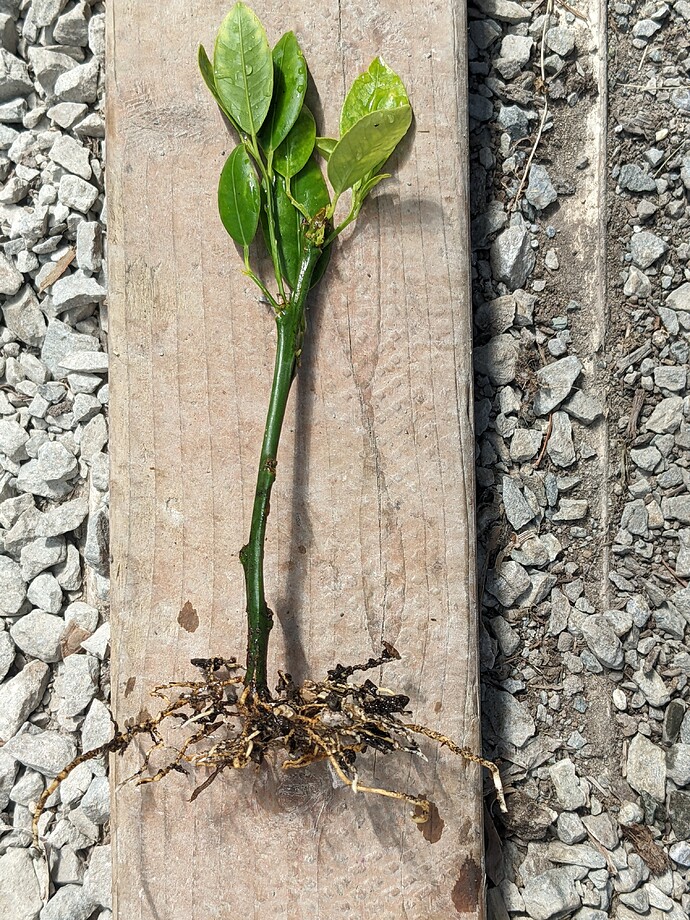 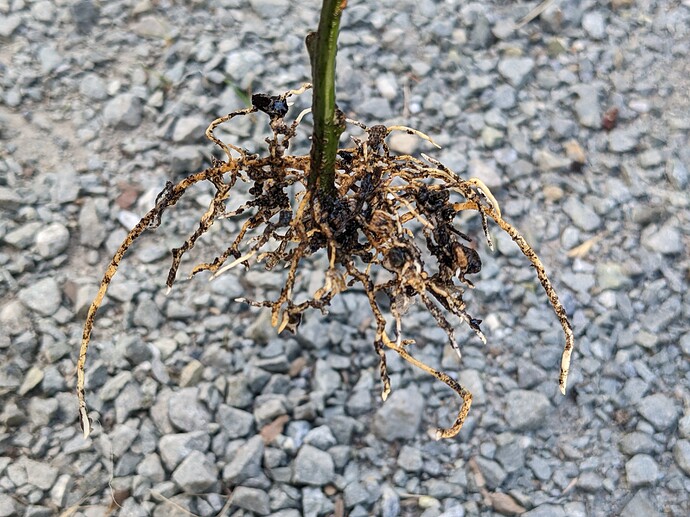 So cool that this came from your Satsuma trimmings in March!

I first posted in March, cuttings were taken from fruit I bought in mid-February, so it’s been a little over 4 months at this point.