I’ve fallen behind with all my work and put off bottling my cider which has been clearing in secondary fermentation. Normally I bottle after 4 months, but now it has been almost six, and need to put it off another week or two, if possible. Has anyone let their cider remain on the lees in secondary 6 months and found it to cause some problems? Will I be okay to wait a couple more weeks before bottling, or do I need to do it asap? I have 36 gallons to bottle: (9) 3 gallon carboys, (1) 5 gallon, and (4) 1 gallon jugs to equal 36 gallons–a lot of bottling.

Thanks in advance for the help!!

I don’t think you’ll have any issues. The one concern is oxidation, but if it’s in glass containers and you haven’t fidgeted with them much, there should be a nice blanket of CO2 to keep oxidation at a minimum. Even if conditions aren’t perfect, I don’t think a couple of weeks more is going to present any problems that aren’t already there.

Thank you. It is nice to have some reassurance, considering the amount at issue. Just worried mostly about affecting the flavors/taste, and not worried about contamination.

JC brings up a good point. Are your carboys properly topped off? And are they in a dark place?

Yes, they are topped off, and I put a blanket over them to keep them in the dark. Wasn’t sure I needed the blanket, since not in direct sunlight, but figured it might be a couple more weeks and it surely wouldn’t hurt.

I don’t think it would be a problem either, assuming your airlock didn’t dry out. Did you sterilize the cider prior to fermentation or use unpasteurized cider? If using unpasteurized you could possibly get some off flavors from wild yeast and bacteria but oftentimes this actually improves the taste over time. Since it seemed you fermented in a bunch of different vessels I would just do a quick taste from each prior to bottling. Sometimes the smaller (1 gallon) fermentation vessels have oxidation issues depending on the shape as they can have a large surface area to volume ratio.

I would think the fermentation would have totally stopped far before 4 months. Do you let it age to have a clearer finished product?
-Edit, I guess you answered that it in the OP.

Are you bottle conditioning for a sparkling cider? What kind of Shelf life would you expect with the finished cider?

Yes, @39thparallel , I have found it takes about four months for clearing (and secondary fermentation), and after clearing, I bottle condition for carbonation. This year, I was distracted and delayed, and left my cider in secondary for about 10 months before bottling. Of the 36 gallons, one 3 gallon carboy was bad, but the rest all seemed okay, and a couple were exeptionally good.

My first year of bottling, I tried CO2 volumes of 2.0 and 2.5 for petillant cider, and decided I like 2.5 best for regular cider. My favorite, though, is made with a volume of 4.0 to make sparkling champagne-like cider.

As for shelf life, I am no expert, but the cider I made the first year (2019) just keeps getting better. I am sure there is a point at which the maturation process begins to degrade the taste and quality of ciders, but I cannot say or even guess when the effects of aging might alter the taste to become altered negatively. A friend brought me some of his grandfather’s cider which had been stored for about 30 years–and once I was able to open the caps (rusty), they were delicious! Unusual, perhaps, and very different, with losts of sediment and rusty lids, but still quite delicous. Certainly the flavor has changed since bottling, and perhaps it was better at one time, but it is still drinkable–and very good. (Photo showing grandpa’s 30 y/o cider in bottle and glass.) 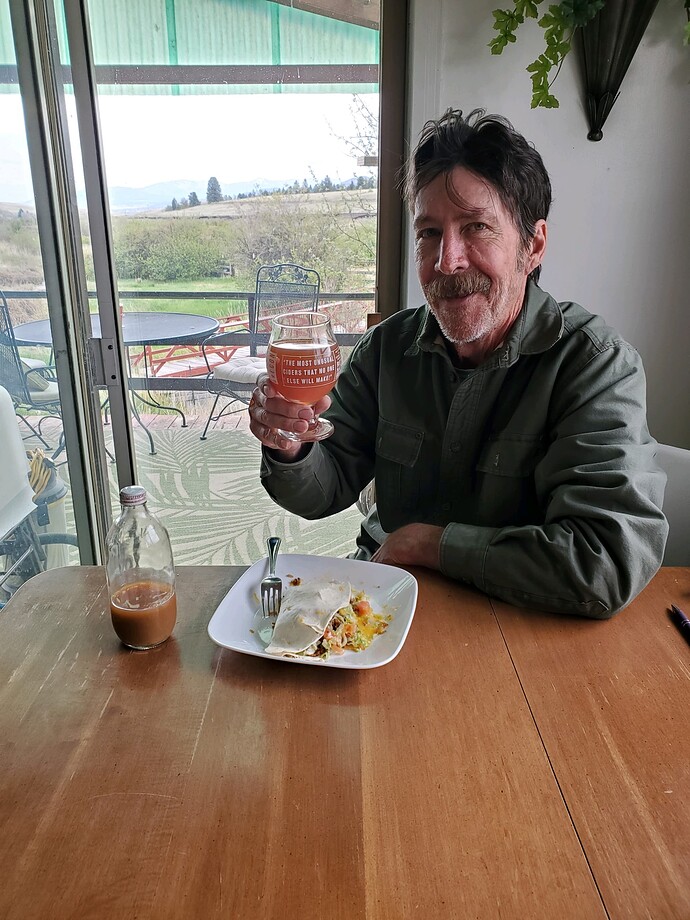