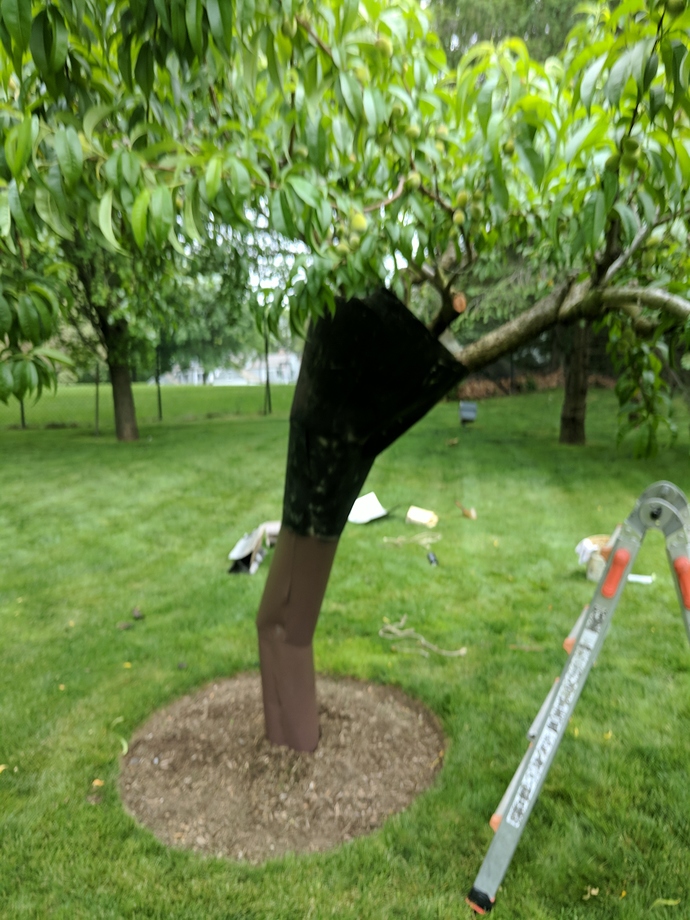 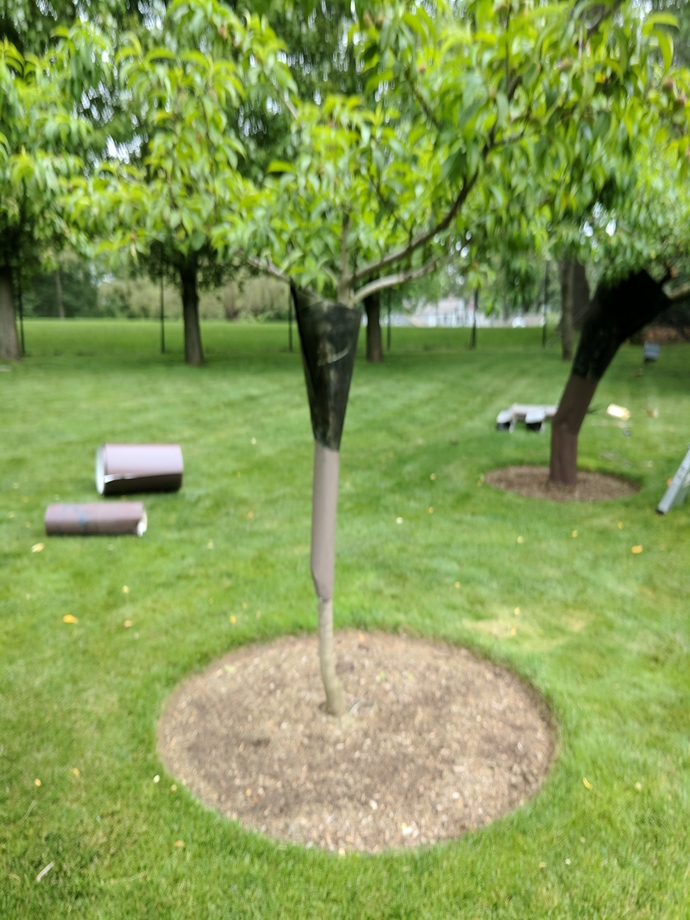 I used to use baffles like the lowest picture exclusively, with good results at most sites, but sometimes the uncovered part of the trunk seems to help them launch above the baffles- not a problem with coons and possums, of course. This year I had a couple of sites where both were used and only a couple trees done the old way lost fruit.

In addition to the metal I also use a grease and oil mixture to further deter squirrels. I used to use only grease, but on cool nights it isn’t slippery enough. However, my helper decided not to thoroughly mix the ingredients and I let it go thinking it was working fine, but it turned out that oil was dripping on to the trunks of trees not fully covered on hot days. That has killed a couple of plum trees and injured many others including peaches and nects on sites I manage.

For now on, all baffles will be constructed from the ground up.

It is interesting that plums are most susceptible to such injury and apples have not been damaged at all.

I was sitting in my front porch rocking chair yesterday morning having a cup of coffee… and i see this squirrel make a quick trip across my yard to my food forest bed… and right up my gold rush apple tree… that previously had 5 or 6 smallish apples on it.

So i quickly retrieve my 17 hmr from inside the house and come back out to the front porch.

By that time he had picked a apple… and went across the yard to the road… and was sitting in the road eating it… when he saw me back out on the porch… he crossed the road and went up the first oak tree on the roadside.

I slipped down there… and well he lost his head and my apple.

There was 1 apple left on the tree… so evidently he had already found and took most of them.

Squirrell baffles… yep looks like I need some of those.

It’s good to see those pictures. It helps visualizing how they work

lost his head and my apple.

Even with your skills, shooting them one by one takes a lot of time. When you are Elmer Fudd incarnate, like me, it could lead to bankruptcy with all the time wasted. Baiting traps is too much all by itself.

Alan,
The buffers look nice, very well done. My trees are too low for the device.

The home belongs to Ralph Lauren’s former right hand CEO, but the orchard is hidden as out of sight as possible. We make them a little more refined for her and her husband now and other orchards I manage in Greenwich.

What I love on that property is that in the middle of the extensive formal French garden there is a stone wall with a garden terrace and then a second stonewall behind and her husband got her to allow the planting of a dozen apple trees between the two. The trees are pruned to balance, but not at all as symmetrical, espaliers, making them the only free form structures in the main landscaped area. Lots of boxwood designs between tea roses and the like.

Not surprisingly, they have me produce pristine fruit for them which requires about 6 sprays a year.

Most squirrels we have can easily jump about 8-10’ depending on the situation. That is above where I prefer to pick fruit. At some point when your trees load up the limbs will likely bend down as most fruit trees do, a perfect target for squirrels. Let me know in a few years if these have been effective. I expect they will not perform as you wish.
Dennis
Kent, wa

3 or 4 cheap mirrors strapped together…

As they approach… they see this “other squirrel” already there… their own reflection in the mirror.

Squirrels are somewhat freakisly nervous already… lots of critters like to catch and eat them… including me.

I would like to see that tested… will check YT to see if that has been recorded. 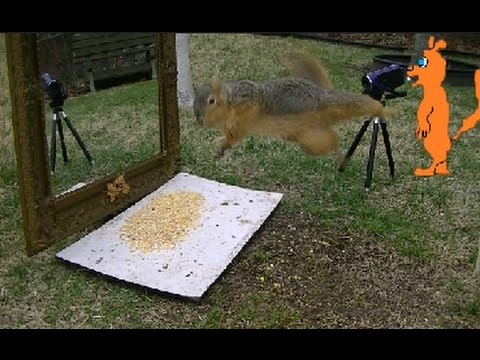 Most squirrels we have can easily jump about 8-10’

Huh? Grey squirrels, from the ground up? Sounds incredible. We have grey and red squirrels here and the highest greys have ever jumped to get fruit is about 6.5’ and that is at one of scores of sites in my area. A half a mile away the squirrels wouldn’t jump more than about 5.

In the end, it is often not about how high you have to pick, but whether there will be any to pick. In my own orchard I generally control them with squirrelinator traps, but I don’t much mind killing them. How far they can leap from above is another question that I don’t have a lot of experience with.

Perhaps in another 20 years.

How about a drone armored with a pellet gun? The tech is ready for that now, but probably humans aren’t.

Even with your skills, shooting them one by one takes a lot of time. When you are Elmer Fudd incarnate, like me, it could lead to bankruptcy with all the time wasted. Baiting traps is too much all by itself.

I can see squirrels in the forest from my window. My fruit trees are full of fruit and yet they won’t come anywhere near them. Long story short squirrels have a keen survival sense which is a key life skill if you are meaty in a world of predators. It only takes a modicum of pressure for them to ingrain into their brains that you are one of those predators and that the orchard is your hunting ground.

Heck I have not shot a single squirrel this year, they know better.

Heck I have not shot a single squirrel this year, they know better.

They also know better than to starve for fear of being shot. I have shot hundreds- even Elmer Fudd can often hit a squirrel with a shotgun. When they are truly hungry they keep coming. What changes is that they begin to flee the moment they see some movement inside our house.

I eliminated squirrels that spend a lot of time up in trees, except when they are knocking down acorns. I shot the flee and climb a tree gene out of their DNA. Now they scurry on the ground until they are out of range. They are easy to shoot once they go up a tree.

Was thinking about wrapping two foot strips of sheet metal around mine. What was the material you used on those? Can you explain what and how you did them.

That is two types of roofing coil, one unpainted (when purchased) 20" and one pre-'painted 24". Unpainted is less expensive and easier to build cones with because it is lighter. We staple them into the trees with 9/16 staples and a staple gun. We use spray paint to make the shiny cheaper stuff more discreet at tonier homes. Baffles must be tight enough to stop squirrels from squeezing in if they aren’t built to the ground. You’d be surprised how rodents can squeeze into tight places and we also try to exclude chipmunks.

We paint them after installed with a well blended mixture of tan axle grease (getting harder to find, but the red stuff is so ugly) and the heaviest weight motor oil readily available.

Duct pipe works just as well but is more expensive and harder for us to work with. You always use it from the ground up and don’t need to staple the trees.

The baffles should be removed carefully with a small sharp chisel and pliers shortly after harvest. We tie them at the base of trees with heavy string so we know the baffles match the trees next year.

Finding the spot to staple is a craft- it is where the coil comes against the trunk.

I think I’m going to go with your duct pipe ground up idea. Stove pipe can often be found for free. The pipe gives it room to grow and no nailing. I have small fence rings around them now for buck rubs, but the pipe would do the same. Thanks.

I’ve found opening and closing duct pipe to be very difficult, but maybe if we’d kept using it we would have gotten passed that. But you can’t just tape it shut or tie it shut without creating a step for the squirrels. It’s also not easy to cut to size if you don’t have the right size to begin with and you can’t make a cone out of it when branches start too low for a straight cylinder.

Sometimes it seems easy to find specific things for free until you need them. That said, we have made the duct pipe work, usually by adding some coil at the end of it.

The squirrel situation seems better here since I started with the Hav-A-Hart routine. Eventually my neighbor asked to borrow the trap and after I showed him my “relocation” routine a few times he started doing it himself. I “relocate” them by dunking them into a 50 gallon drum, then either bagging them for the garbage truck or just tossing them into the swamp. The final part depends on whether or not it is garbage day.

I still see squirrels but I do think this is helping. We were catching one every day the trap was out there but recently it has been taking 2 or 3 days for one to show up.

The reason I would go with the pipe is the critter. My main problems are raccoons, possum, as well as squirrels. Bigger animals will get around anything small. Plus it would work for buck rubs.

Baffles and pipe are best removed by the time bucks become their worst- preferably right after harvest. Mice like to overwinter in them and they encourage WAA and other insect pests. Here the bucks (white tail) don’t rub above 3’ from the base of the trunk or below the baffles when they aren’t full trunk. I use cheap wire fencing cut to a much wider diameter than the trunk itself- making a cylinder held together by a couple wires of the fence, and as long as it is fairly rigid, 3’ height is always adequate.

I doubt those specs apply to mule deer, but our white tails get to a pretty healthy size.