The symbiotic relationships of trees, soil, and fungi

Interesting experiment done on trees Suzanne Simard: How trees talk to each other | TED Talk. Perhaps we should continue to rethink how we plant our orchards and remember to plant diversified trees. Fungi do appear to be an important part of the web. Mycelium has proved to be critical in building strong orchards https://www.ted.com/talks/paul_stamets_on_6_ways_mushrooms_can_save_the_world. The fungi effects on insects is incredible. I don’t necessarily agree with everything said but the research is fascinating. Your likely aware I research these types of topics Fungi Friend or Foe? frequently to improve my soil fertility Soil Secrets and my orchard productivity Here comes the 2016 apple and Pear harvest!. I’m a believer in rebuilding soils with things such as blackberries (chemical free for 20 years) Blackberries by the gallons - #11 by clarkinks. This speech was given in another language about the phosphorous crisis but has subtitles Mohamed Hijri: A simple solution to the coming phosphorus crisis | TED Talk. This is more information about mycorrhiza Mycorrhiza - Wikipedia

About 10 years in college my plant nutrition professor said repeatedly to invest in phosphorus, because it is getting scarce and demand is rising.

Whenever I mulch I look for the areas that are most rotted and full of mycelia. Seems to help!

Ampersand,
Your professor was a smart guy! I suspect more research will be done on Lichens over the next several years Lichen - Wikipedia. We know they are a critical soil builder but they also appear to fix nutrients for the soil depending on species http://onlinelibrary.wiley.com/doi/10.1890/ES15-00140.1/full. Perhaps soil fungi or a similar organism will eventually solve all the phosphorus problems. 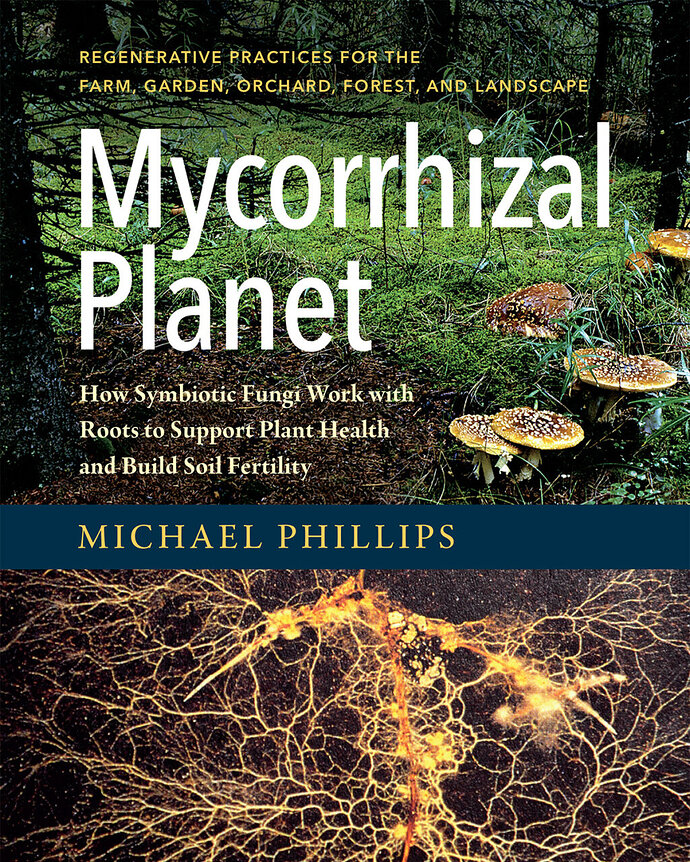 Regenerative practices for the farm, garden, orchard, forest, and landscape Mycorrhizal fungi have been waiting a long time for people to recognize just how important they are to the making of dynamic

I attended a couple discussions he led at Farmer to Farmer conference this past fall and he went into some details about how different fungi (endo and ectomycorhyzomal) can greatly increase plant roots ability to acquire nutrients. Certain types of fungi can only interact with specific species of trees, so having species diversity will allow correspondingly greater diversity of fungal allies underground. He mentioned ‘soft hardwoods’ like willow and alder form symbiotic relationships with some kinds of fungi that other fruit bearing trees (thinks apple, pear) cannot, so there may be value to having them in the orchard. Fascinating stuff and still just getting understood.

I already posted this in another thread, but it can not hurt to post it again - list of associations plants-myc.

Mycorrhizal Applications | Leaders in the Production of Mycorrhizal Fungi

Mycorrhizal Applications is the industry leader in the research and development of commercial mycorrhizal fungi soil inoculants designed for all industries involving soils, plants, and people. Experts in the production of endomycorrhizae and...

therefore, when you plant a chestnut you want to pick up a shovelful of soil from under an oak tree. If you plant an apple in a pasture, you don’t have to do anything. Of course, as Jesse says, the wider the community, the more myc. are supported, even if all members of the community are endo-types. the myc. will also interconnect and trade nutrients based on chemical signaling. I have at some point in my life make an experiment where I manure a square yard and see how far the fertilizer reaches.

I’ve heard a tiny bit about some types that only work with Ericaceous plants (blueberries, for one) and have wondered if the absence (I assume it’s absent, at least) in most home gardens is part of the relative difficulty of cultivation. Perhaps the fungi allow more soil flexibility?

yes, and a contributing cause to blueberry cultivation failure. Those myc. are not present in regular garden soil, being native to bogs and adapted to high acidity. it is a good plant to buy potted and inoculated. the fungi have an interface that is suitable to to blueberries, and viceversa. the other interfaces are not good for them.

Jesse,
Very interesting looking book! Thanks for posting that! Jesse I had read that about softwood trees somewhere and do grow them in between my orchards to serve as a wind break and for soil building.
Glib,
That’s a really good document. If I saw it before I don’t recall. Thank you for reposting!

Do you happen to know anywhere to get blueberry inoculant now? I didn’t see anything for blues at territorial, just generic ones that don’t seem to have any ericoid fungi.

Question for anyone; what affects do you think the fungicides we are constantly spraying our trees with have on the soil fungi?

J.D.,
Take a look at this thread Fungi Friend or Foe?.

ask and you shall be given.

Mycorrhizal Applications | Leaders in the Production of Mycorrhizal Fungi

Mycorrhizal Applications is the industry leader in the research and development of commercial mycorrhizal fungi soil inoculants designed for all industries involving soils, plants, and people. Experts in the production of endomycorrhizae and...

you will have to translate the toxin to the name of your favorite spraying product.

Do you happen to know anywhere to get blueberry inoculant now?

No, only commercial. I talked to Fungi Perfecti company about adding them, and they said if they could find a strain, they would add it, so I pointed them to two products, yet they never added it,
Rhizoscyphus ericae. is the one you need, and from the genus Hymenoscypus or other Rhizoscyphus species may help too.

I once found a commercial source, but I can’t find it now. It was expensive as they sold only in large amounts for blueberry farmers.
The only product I could find is from another country
Oh I found a US distributor. Expensive! And I’m not sure they actully have the right fungi?
http://www.viaterrallc.com/_p/prd15/2042852505/product/rhodovit

Do you happen to know anywhere to get blueberry inoculant now?

It is typically sold as a bottled emulsion. It is pricey and has a half-day shelf life once opened. An alternative is to order a rooted native vaccinium (e.g. evergreen huckleberry) and get the mycorrhizae as a bonus.

for blueberry myc. I would go in the Pickney area here in SE MI, where I go sometimes mushroom hunting. I know where several wild blueberry are near bogs, but soil from other vaccinium would work too. But it is easier to just buy a bottle…

I found that site, but the site doesn’t seem to work? Plus there’s no info on what is in it…

An alternative is to order a rooted native vaccinium (e.g. evergreen huckleberry) and get the mycorrhizae as a bonus.

That sounds like a very good idea to me! I think I have the fungi in my raised beds kept very acid for blueberries. It’s been 5 years, and I used the soil for one I planted this year. It grew to two feet, it’s huge for a first leaf plant.