Tree damage from a beaver

I have a pond and occasionally I get muskrats and I have had one beaver visit my pond pre fruit tree era at my property. I heard two " slaps" on the water a few days before I noticed the damage to my trees. I had heard that type of “slap” on the water the last time I had a beaver visit my pond. At that time he had taken down just a couple of smaller trees and built a dam like debris at the water tube that empties the pond water under my driveway. He was gone in about a week or so.
I went out last week and saw this damage to my fruit trees close to my pond. I have called for an animal control company to come out and take a look to see if they can relocate this beaver elsewhere besides my pond area. There was a lot of debris in my water overflow tube again this time. More inside the tube rather than on the outside of the opening. We had over 3" of rain the last day and night. Perhaps that amount of rain has washed out the beaver dam debris. I will not know until it stops raining tomorrow.
Here are some pics of his handiwork , at my expense. 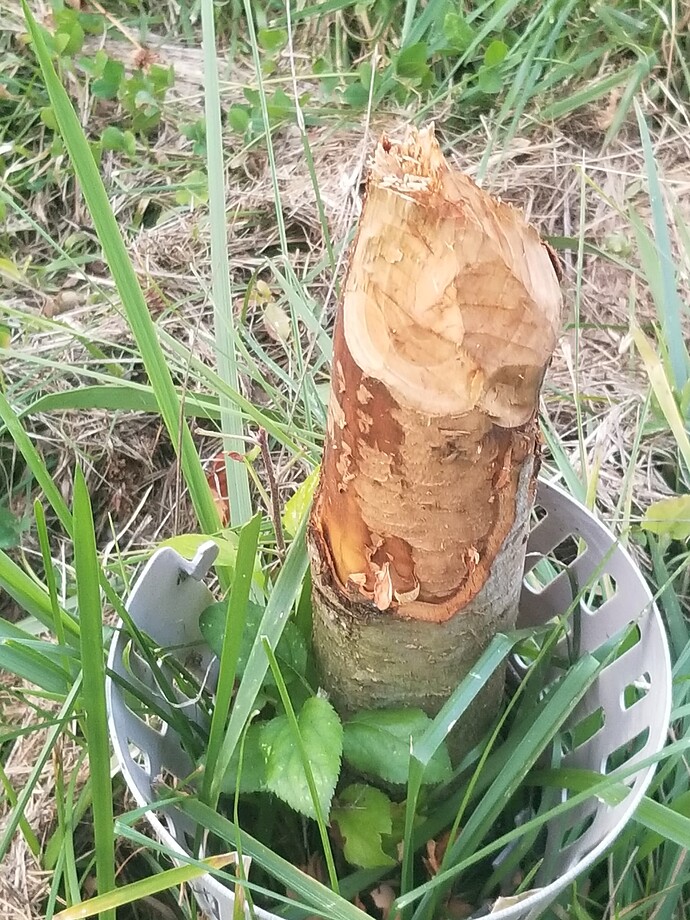 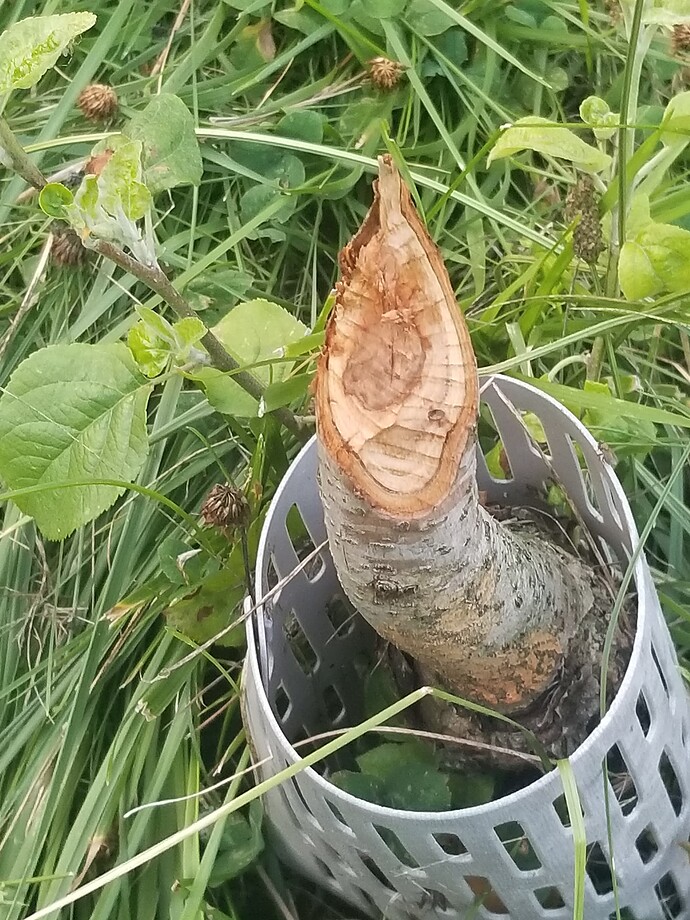 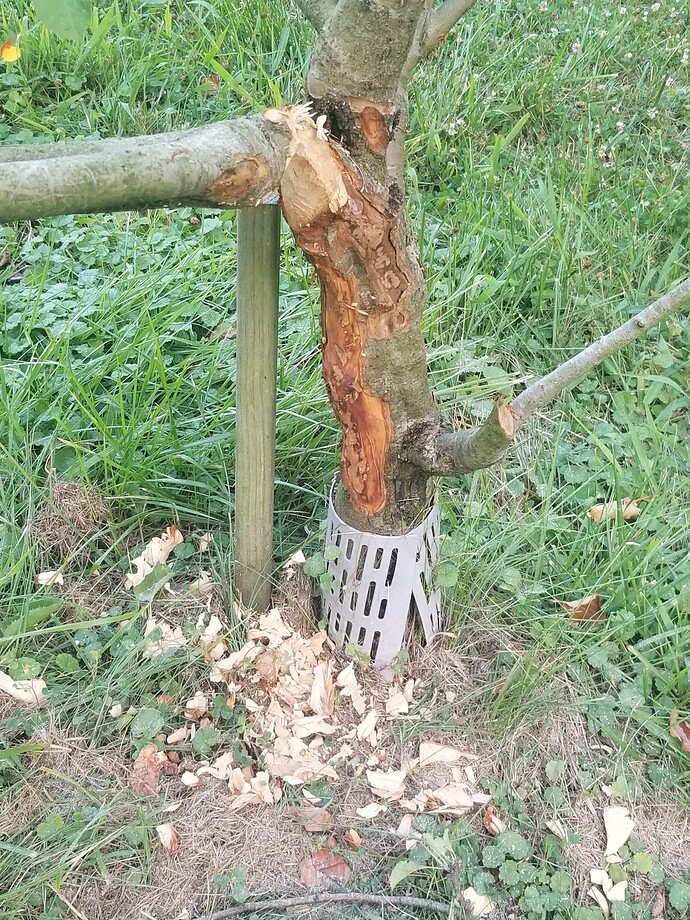 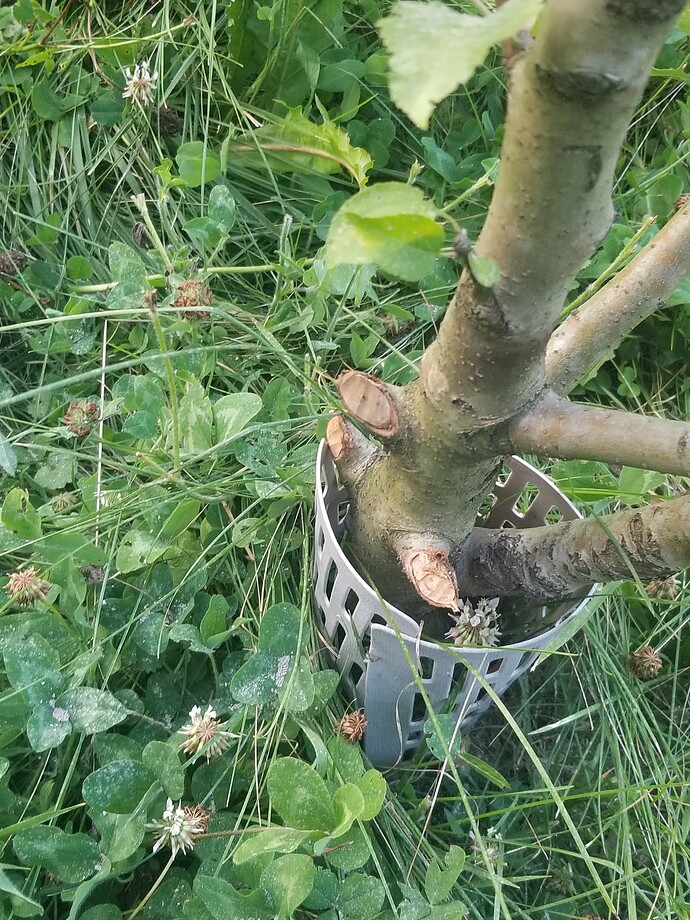 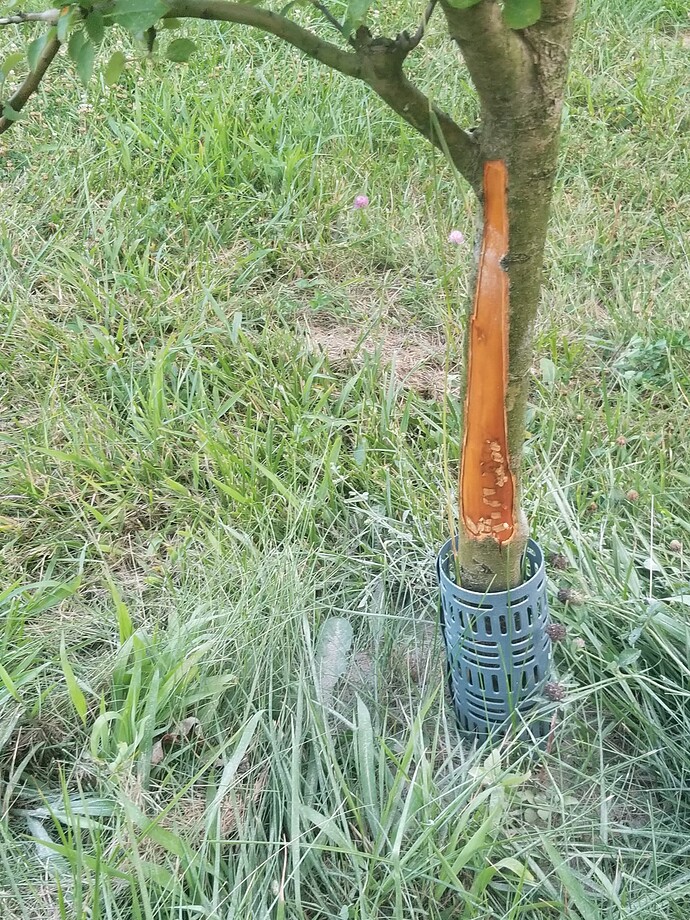 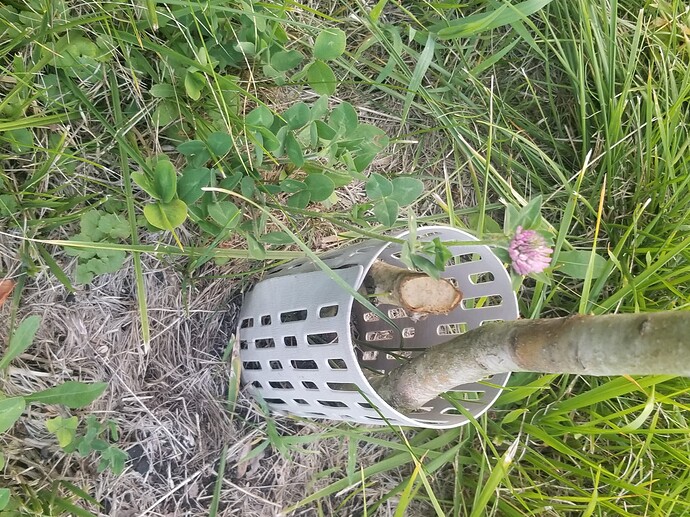 Chances are it can’t be relocated as per local regulation. Best long term solution for it and any other critters that will show up over the years is a decent .22 pellet gun, or a willingness to pay for a company to keep disposing of them for you.

I realize that some people are squeamish about dealing with pests but either they end up dead (by your hands or somebody else’s) or you give up trees.

After having entire fruit trees removed by beavers, we put up hardware cloth around trunks. Effective till beavers relocated.

Beavers move in & out of the creek here. Sometimes we go several years between their appearances. and then they’re gone again. They have never seemed to try to dam up the creek (knock on wood!)…yet. I presume they’re burrowing into the creek banks for their homes… They have, however, pushed up low mud dams in the waterway that runs through the center of the creekbottom field
They can’t be satisfied to munch down on trashy stuff like the boxelders, green ash, thorny honeylocusts, or elms growing plentifully along the creek… oh, no… they’ve gotta range out and cut down 25 yr old pecans. Grrr.
Have managed to cage a few grafted pecans/hicans before they totally girdled them , but most are on the ground before I know ol’ Bucky Beaver has shown up again.

Being there at the right time to introduce Mr. Beaver to a high-speed lead projectile is the issue, though. It’s not like they’re just hanging around waiting to be shot, and the riparian strip where these pecans are is anywhere from 1/8 to 1 mile away, depending upon which section they decide to set up residence in.

Focusing your efforts at first and last light is helpful

Below is a pic of me (around 1983)… and some GOOD beavers. Good and dead… destined to become a fur hat 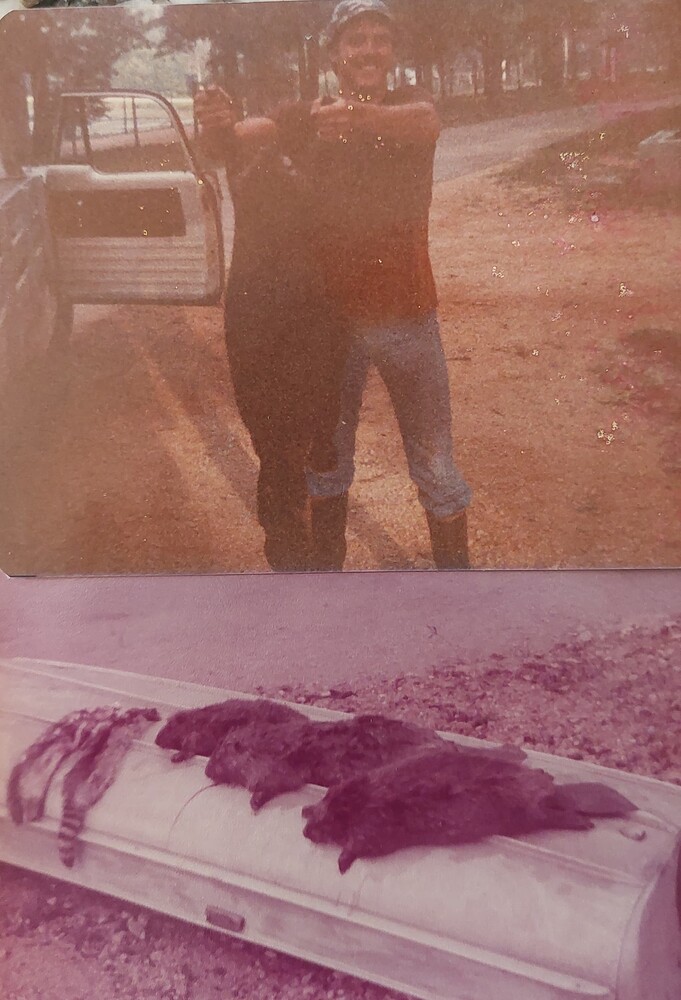 If there are any trappers left up north there… you might find one that would take your beavers and muskrats coons etc.

I was working my way thru colllege then… at a lake resort… and the owner paid me 20 bucks per beaver and 5 for rats. Both he felt did damage to his lake dams.

A beaver sold for fur back at that time (southern beaver) brought only 3 to 4 dollars. 20 bucks was nice.

The lake owner had two african lions on the property… and the beavers and rats I caught were fed to them.

Trev,
My dad did a little bit of trapping, back when I was in high school - he’d have the day’s take waiting for me to skin out when I’d get home from school (during the spring/summer, he’d often have a tub of fish for me to clean when I got home),
He caught mostly 'coons and 'possums and an occasional fox, but did catch a couple of beavers and one otter - I didn’t even know we had otters down there, then. I smoked one beaver, and it made pretty good barbecue… really dark red meat. The other, smaller one… I don’t recall how I cooked it, but not smoked… and I couldn’t get past the smell - guess I’d gotten some castor gland secretions on it somewhere along the line. But, I chipped it up and added BBQ sauce and took it to a community potluck dinner, and folks cleaned it up… thinking it was venison BBQ… I never told any one it was beaver. lol.

Trying to kill them is hit or miss (literally). A simple single wrap of cheap chicken wire will stop them 100% of the time.

Thats been my go-to, when I see the damage before they manage to fully girdle or take the trees down totally but I’m not planning on caging 500 pecans

@Lucky_P … thats a great story.
I helped my dad clean lots of fish deer quail dove squirrel, etc… he never got into trapping or peditor hunting… but i sure did.

With steel traps i caught many a beaver using poplar limbs… just whack a few half inch to one inch limbs off a poplar tree and scratch the bark up good with my hatchet. They smell so good… a beaver will check them every time. Poke them in the bank of thr river or lake… traps in the water edge.

I still have 6 bottles of hawbakers beaver castor lure in my gun cabinet… cant make myself toss them. A remminder of the good ole days.

The beaver were short lived at my property and my pear rootstocks grew back.

@Lucky_P … check these babies out… 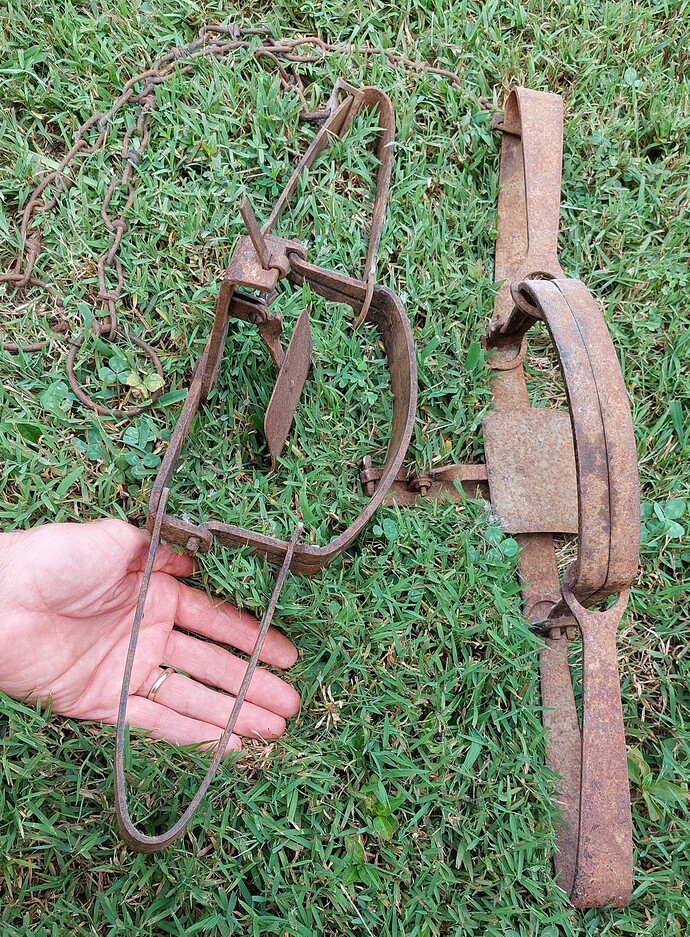 I bought them for 7 bucks each in 1979 from a old trapper and fur buyer in the next county over.

They were my only traps that could hold a beaver by the back foot. Victor 3’s and 4’s worked fine for front foot.

Our southern fur market died 1987… and never really came back. In 1998 i sold 250 steel traps to a trapper up north… they could still sell fur up there.

I kept these two… on display in my home office.
Another reminder…

A few years back we had beavers at the golf course I work at. Amazing how much they do.

The trees they were eating weren’t an issue (natural swampland), but they kept damming all the drainage pipes under the road and flooding it. We still haven’t gotten one of them reopened

We found an abandoned dam further downstream that I broke apart to reduce flooding. It must have been 7’ tall and wide.

I had the animal removal company come out today. They are going to set some traps. He said they have had a huge issue with beavers in the area this year for some reason. He said they just caught a male that weighted 65# and a female that weighted 58# about 10 minutes away from me. He said they were destroying huge trees ( he made a circle with both arms ) in that area. So he not surprised they have traveled this far. I have about 40 fruit trees so I need this creature caught ASAP. I spread some “Repels-All” powder in the mean time. They will bring the 10 traps out tomorrow. Hope the beaver stays away until they get the traps set. I think there is only one beaver. That is all I see when I drive in my driveway and he scampers off.