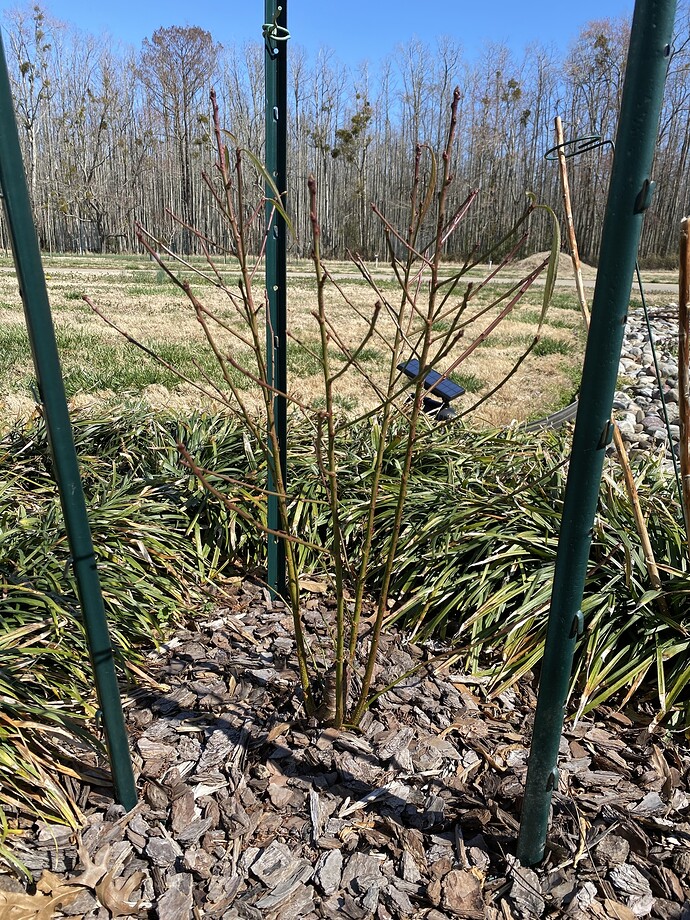 Last year we planted a Moorpark Apricot. It broke off at the graft union in a wind storm. Now, the rootstock is growing up from the roots - and I am thinking that I can make use of the established root system - by grafting scions to a few of the strongest volunteers that came up from the rootstock.

I have lots of peach and nectarine scions - but only one apricot, that I received in trade from a forum member.

I thought I’d use 3 of the new sprouts . . . and then cut off the 2 that look the puniest next winter.

I’d appreciate any advice. Thanks.

good idea. Do it

thank you, sir. Do you have any idea which stone fruit has the best shot at compatibility with apricot?

I do not, but I would not let an established rootstock go to waste.

Hi Karen,
Maybe contact the place you bought the tree from to find out the type of rootstock, it will give you some clues as to what’s compatible when you Google the rootstock type.
Once you know that information, @SpokanePeach (Kevin) who grows a lot on peach rootstock may be able advise you
Dennis

Do you still have the label that came with the tree? The common options for apricot rootstock are Myro29C and Citation. Myro is compatible with apricots and plums. Citation is said to be compatible with apricots, plums, peaches and nectarines. However, out here in CA, there does seem to be some incompatibility with peaches and nectarines with Citation. I’d think hybrids would inherit the graft compatibility of both their parents, but I don’t have personal experience. For e.g Spice Zee Nectaplum or Candy Heart Pluerry could be grafted on Myro29C.

That’s some kind of peach root stock, just look at the remaining leaves and the green color of the bark. Citation would have reddish bark with red leaves. Plum leaves don’t look like that.

If you could dig and expose the shoots…perhaps some have developed roots separate from the old trunk? If so, I’d probably lift and pot up a couple. Then graft even next year if you don’t have dormant scions this year.

What @BlueBerry said. I had an apricot on Marianna die and I got several viable roots from it by doing just what he said. One of them supports my only successful apricot graft -which is doing well at a friend’s house.

Can you graft them all and layer them? That way you’d get whatever grows and you want to keep on that planted root, plus other trees to put elsewhere. Or just graft one and layer the others to graft/move next year- but the first option gives you trees sooner.

Agree. I missed both the color and leaves - cannot be Myro or Citation. Looks peach-like

Very good idea, always a friend who would want them!

The easy way to do Francine’s suggestion would be to cut a small hole in a gal plastic milk jug, slip it over the sucker after scratching up the bark a bit, apply some rooting hormone and then fill the jug with good quality soil that holds moisture well. By this fall the you could cut off each layered shoot at the base just below milk jug and plant the rooted grafted shoots to a normal depth near graft union.
Dennis

Its a great plan. I’d rather have an established rootstock and a scion, than a new tree of the same variety.

Transplanting is a bigger setback than grafting.

Yes as others said graft it! If it was me I’d graft all of them then chop off the failures. Then I’d chop off all but the best one.

I think that looks like a peach, too. You can graft apricot, hybrids, and Euro plums. And peaches

I can’t remember about Japanese plums at the moment.

If it was me, I’d graft all of them, intend to pick the best one, and leave all or most of them indefinitely.

Yes I thought of that like the 3 trees in one hole orchardist methods.

Where did it come from???
I am embarrassed to say . . . it was one of those ‘in a bag’ tiny trees and it was outside of the Kroger grocery store! My husband brought it home on a lark - along with a Spring Satin Pluot.
The pluot seems to be doing well.
I think I’ll go with Blueberry / marknmt / franc1969 - and others’ ideas.
I’ll try to dig down and remove a couple single shoots, and pot or plant them - while leaving one to enjoy the original root system.
And I’ll have to find homes for all except one (maybe 2).

I’m excited to know that I can graft peaches to this rootstock, however.
I cannot do a THING with plums, here. We have tried and tried.
So peaches are the way I’ll probably go. And maybe one apricot scion.

Thanks so much for all the input!

To me, it looks like they all may be coming from the root crown. You may have to make a big wound to get a separate shoot with roots.