Hello
For the last five? years, I have had very deformed pears on an Orcas pear from Northwoods planted in '89. I decided to search deformed pears on master google. Low and behold, stinkbug and stony pit virus came up. What do you think? If stink bug, what to do? They look like this: SEE PICTURES AT BOTTOM OF THIS THREAD

Deformed pears
Is this a result of rust on pears?
Insect and Disease Identification Thread
Derby42 April 2, 2017, 4:52am #2

I have similar damage on my peaches that I believe is stink bug but not deformed to that degree.

Looks like Stony pit virus. The problem is it can’t be isolated which is why it was not detected.

I’ve had a few pears like that. I had always assumed it was PCs or codling moth. Never heard of stony pit virus.

Bosc is affected seriously but there are other pears affected more so than some.
http://ir.library.oregonstate.edu/xmlui/bitstream/handle/1957/8830/tec_bul_93.pdf?sequence=1
http://extension.psu.edu/plants/gardening/fphg/pome/diseases/stony-pit

Clark,
Just wonder if I got a virus infected Bosc scion from a friend and grafted it on my Harrow Sweet pear, woud this stony pit virus stay on that graft only or spread throughout the whole tree?

Mamuang,
It would spread throughout the tree and maybe throughout all your trees. These problems are what make viruses particularly bad. That’s why Corvallis closed their site due to a suspected virus and stopped all scion orders the year before. Corvallis offers a great service where they test trees in there orchard for problems and then they offer the public the results. Great pears such as Tyson do not have any serious problems as shown below in the pathogen test https://npgsweb.ars-grin.gov/gringlobal/accessiondetail.aspx?1436442

Pears might be infected with a minor virus at times at Corvallis and they still offer the scion wood it just shows positive. Many people request virus infected scion wood from ARS GRIN. There is little doubt viruses are spread by the grafter, not by insects, possibly by tree roots to name a few ways.

Patrick,
One last thing I made an assumption you checked for a boron deficiency.

Patrick the fruit has a couple of deformities but this short article is worth reading http://extension.psu.edu/plants/gardening/fphg/pome/diseases/stony-pit

I have a large number of baby pears that are extremely deformed, but not in the same way as the ones posted by @Patrick at the start of this thread. I’ve posted a photo of what my pears look like. Any idea what is going on?

One of my trees have almost all the small pears in this condition, one tree has about half, and some trees have none like this. not sure what I’ve got here? I sort of think maybe its rust but they don’t have the bright orange hairs that have always came with pear rust on my trees and I sprayed it early and often this year with copper, myclo, and Captan, so I’m surprised if it is rust but it certainly could be. 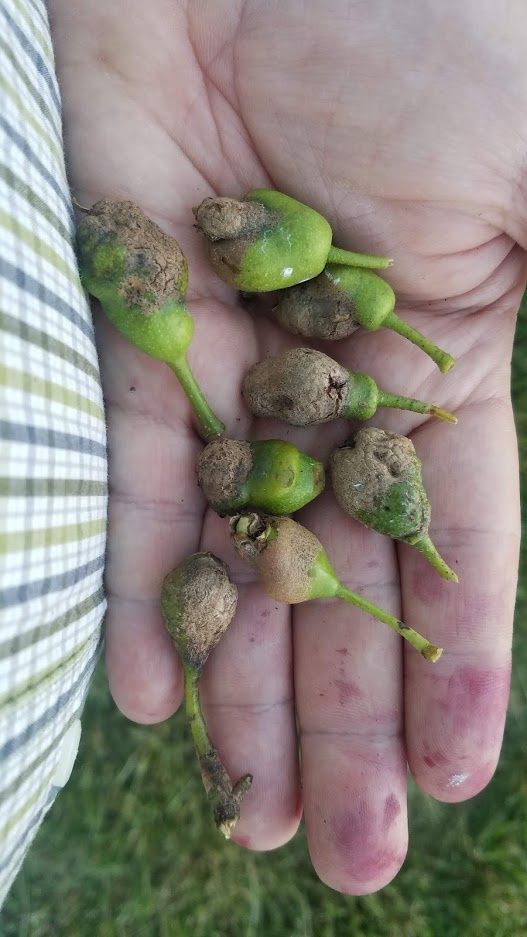 Normally if the fruit was orange or yellow i would say its pacific pear rust or quince pear rust. Im not ruling that out but its not tge right color lesion. Had a problem once with a couple of mishapen fruit and blossom blast which turned out to be a boron deficiency. I took a chance and put on boron which cured it up very quickly. The most likely culprit in my opinion is pear scab if other symptoms exist https://pnwhandbooks.org/plantdisease/host-disease/pear-pyrus-spp-scab

Kevin,
Just a wild guess. You did spray copper at a rather high dose for an active growing stage of your trees.

Would those young fruit got copper damage? Copper damage causes russeting on fruit. Could it be those fruitlets were so young so the russeting damage were more severe?

Thank you both (@clarkinks and @mamuang). You both offered some great ideas that I’m going to be researching in about 3 minutes! Both seem like more than reasonable theories so I hope I can figure out which one. I’ve seen Clark’s past posts about boron deficiencies so I really ought to get my soil tested either way so I can eliminate this possibility from any future pear problems. Also, I completely agree that if I was seeing that bright orange fungus I’d be convinced it was pacific pear rust, and I still think it is likely the culprit even though I sprayed. I wonder if the timing of my sprays was such that it was off just enough to allow the deformities but prevent the orange “hairs”. WHen I do google image search for PPR it shows pears JUST like mine. Also, this is the first year I’ve seen Pacific Pear Rust (including the orange fungus) on my Bradford pears- which of course I do not spray! So the spores are obviously here on my place.
Tippy, I also think the copper is a distinct possibility. I wasn’t aware that it caused russeting. That might be an important clue because in addition to my little pears being deformed, they also are extremely russeted. So that is a good idea I’m going to consider. Either way, I’ve certainly learned my lesson with full stregth copper after dormancy!! ha.

The second fruitlet from the bottom of the pic looked like russeting. You probably have a few things going on with your pears, not just one issue.

Yes, copper spray (even at the right dose) could cause russeting on fruit. 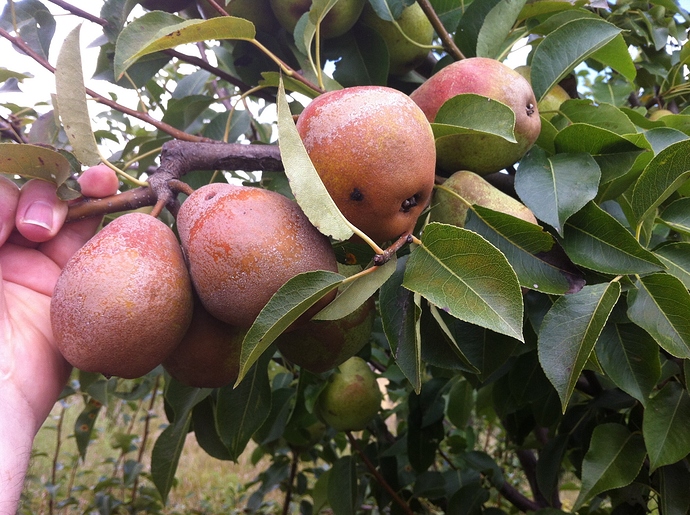 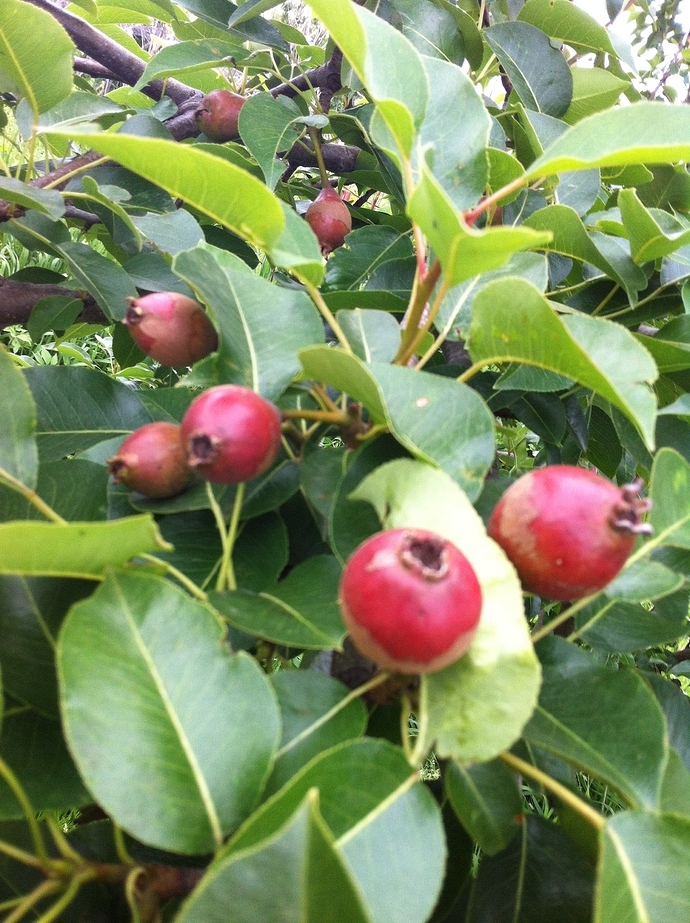 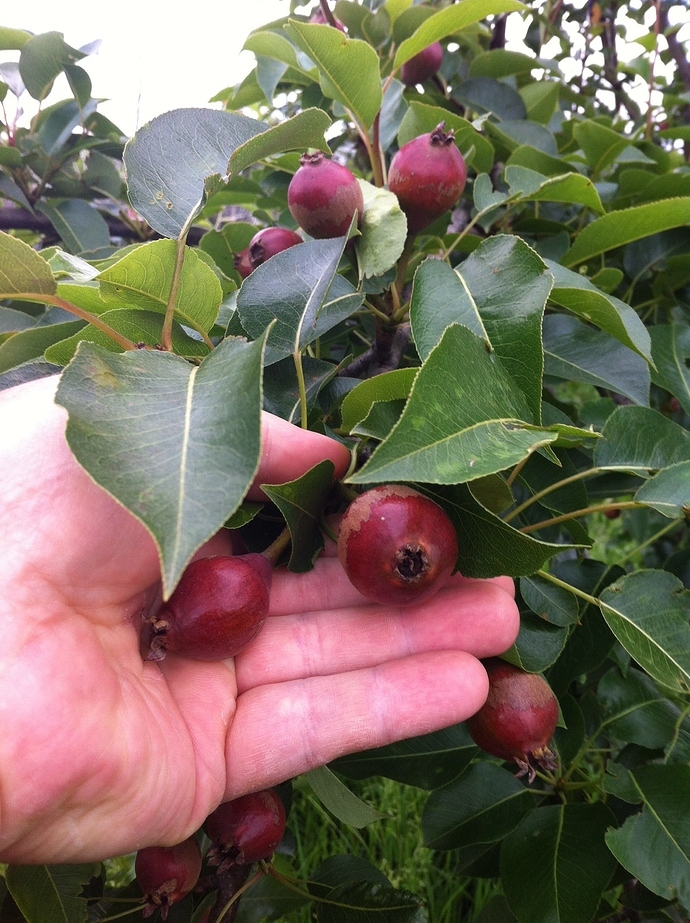 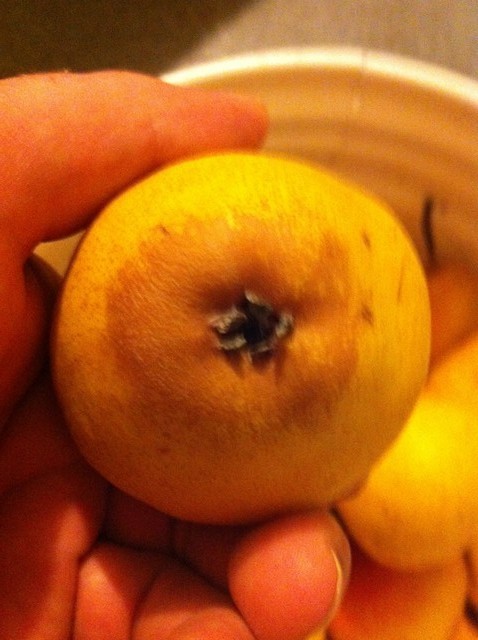 So,what can be done?

@Faygo
Copper needs sprayed pre bloom so pears will not russet. Frost rings are based on variety and bloom time. Copper also kills ice forming bacteria which buys you a few extra degrees of cold tolerance at times. At this point its more about how Kevin is going to avoid this problem next year. Copper is used to retard blossom blast and fireblight. If its rust a fungicide spray retards it. Pear Rust. Another fungicide is used with with scab Apple and Pear Scab Management Guidelines--UC IPM
Typically fungicides are already used such as immunox, captan etc. To control the other host of many pear diseases that are possible Disease Control for Home Pear Orchards. These fungicides do not work well on rust and its best to click the rust link to look at the latest developments on the fight with rust.

Clark…after your helpful post I went back to my pears and took a closer look, and now I’m more confused than ever. Mine seem to have 2 patterns of russeting. Many are russetted about half way, starting at the end/bottom of the fruit and going half way toward top. The others seem to have a ring, just as you described. So, do you think this is frost or copper or both. I know I hit them with full copper when they were a little smaller than a marble, but we also had a very slight frost after petal drop so it could be that i guess?.

These are various green euro pear varieties. The pics look a lot like your frost damage but I tend to suspect copper. 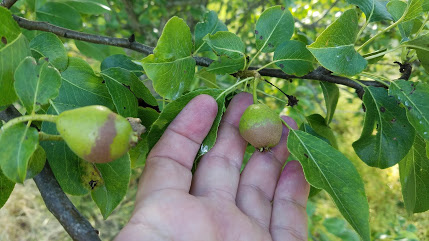 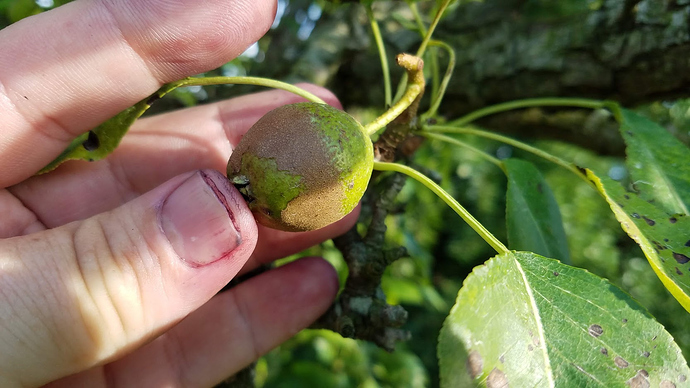 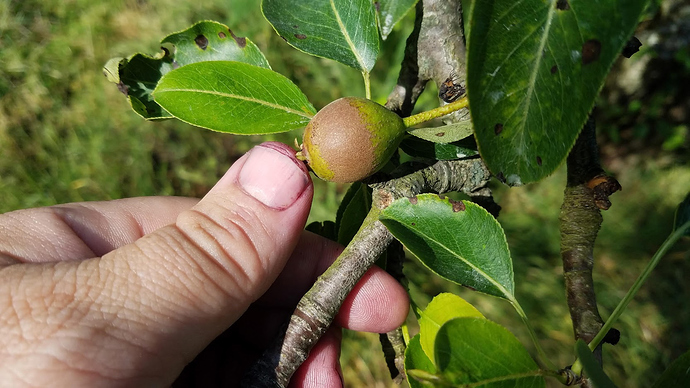 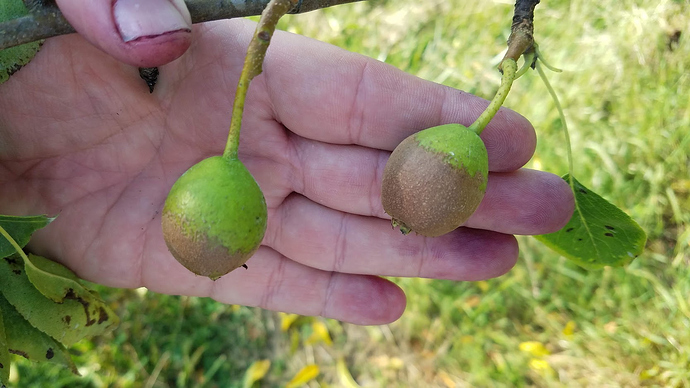 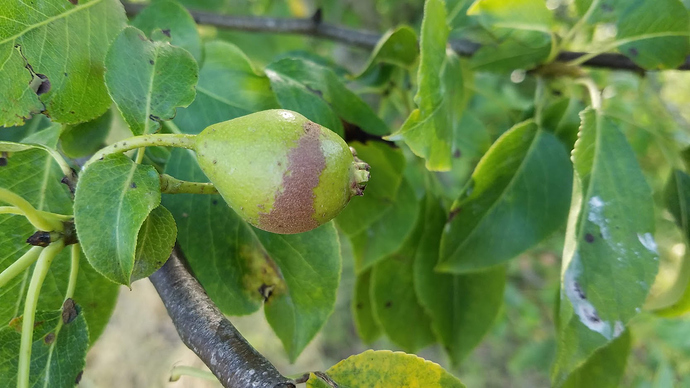 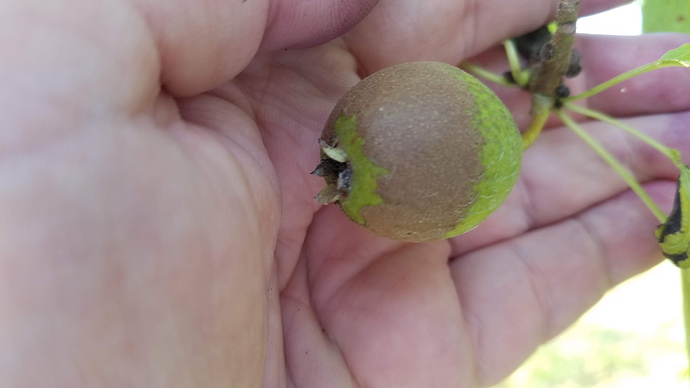