What is everyone eating from their orchard today?

Just adding my two cents to what Bob said…I’m sure just about any black currant would make excellent jam…and therefore if production and other considerations rather than taste straight off the bush is the deciding factor, I would also consider Crandall (Clove currant/ Buffalo Currant). the currant sawflies seem uninterested in the leaves while they went after my black currants and gooseberries right next to them . They hardly taste at all like a black currant off the bush, until they are made into jam and the distinct ‘black currant’ flavour comes right out…and they are larger (berries)and quite productive. The plant is vigorous. The little flower remnant at the end of the berry, unless you want to individually remove them( as they don’t separate easily),will necessarily be part of the jam (extra fibre) and is not noticeable in the jam, besides, the skins are thicker and add a nice chewiness, if you like that kind of thing. Until I made jam from these, I wasn’t sure of the value of growing them, but now they seem a more trouble free alternative. The large berries are single rather than in clusters which cuts down on rot from moisture…and they are not hiding under a canopy of leaves when you go to pick them…the thing I dislike most about black currants, ironically, is the harvesting !

I made black consort jam for the first time this year and do not consider it edible. Yuck! Neither of us like it.

if you are looking for more complex flavors DK will only give you honey. so you will find BJ better flavor for this reason.

We have gone to the trouble of removing the woody calyx from each berry. Takes a while, but improves the result. I add one more cup of sugar than of fruit when making jam. I also put the black currants in the blender to break 'em up, and simmer them 10-15 minutes before adding pectin & sugar. Smooths out the texture and makes it spreadable. I have no Consort; am growing Ben More, Westwick, Black September, a nameless bonus plant we call Orphan, and just planted Belaruskaya.
I love it as jam, my wife does not. I also make cordial with black currants. Can’t make enough of that for my wife!

We just can’t stand the cat pee flavor of the black consort. Even the bush stinks! It will be strictly for the birds from now on. I have some other blacks that I hope will taste better.

That cat aspect (or juniper overshadowing blueberry) is a trait of black currant. I find it pleasant when mitigated by enough sugar or other factors. Not everyone can get around that and is perfectly understandable.
I started growing black currant after buying a tin of jam in Canada. Once home in the States, there were no sources of it to be found, apart from some websites at exorbitant prices. You might look into Crandal/clove currant. That is an American prairie species with yellow blossoms and a lighter, sweeter (so people write - I’ve never had the pleasure) taste. I had some of the jam recently and see i need to make more very soon.
Regarding this thread, I made applesauce cake with sauce from the Bardsey tree out back. Bardsey cooks to soft pieces & imparts wonderful flavor to cake. Good stuff!

I see you’ve found a good workaround, but I’m surprised you can’t find black currant jam easily. I can often find it even in regular supermarkets (usually near the Kosher or “ethnic” foods). It’s red currant jam that I can never seem to find…

That trip to Canada was at least ten years ago. More interesting/useful/nutritious things are finding their way into the market these days. Glad for that.
Never seen red currant jam anywhere - red currant jelly, yes, since childhood.

I do have more luck with finding the jelly, but I much prefer the jam. I used to be able to find it more about 10 years ago, from the same brands I can find black currant jam. Part of it, I’m sure, is where I was living at the time.

Whatever I grow I eat, I don’t particularly worry about food anymore, 81 next month.
Here is part of my diet, homegrown mandarins, oranges, pomelo, paw paw, persimmons, pears, plums, pluots, figs, bunches of good garlic.
Here is what my dining room looks like. 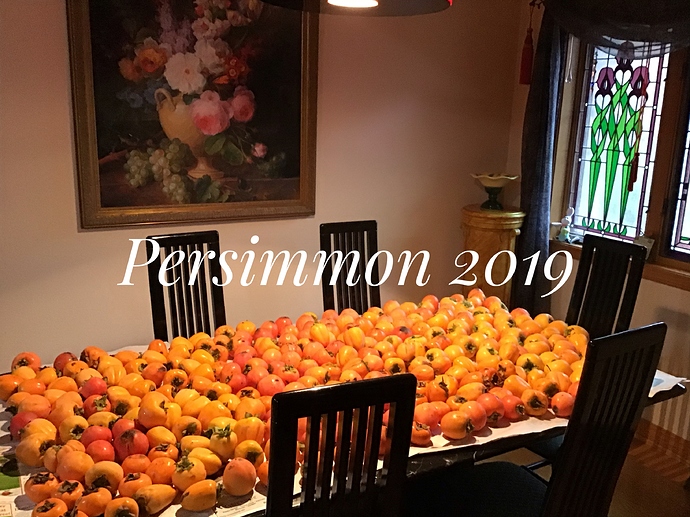 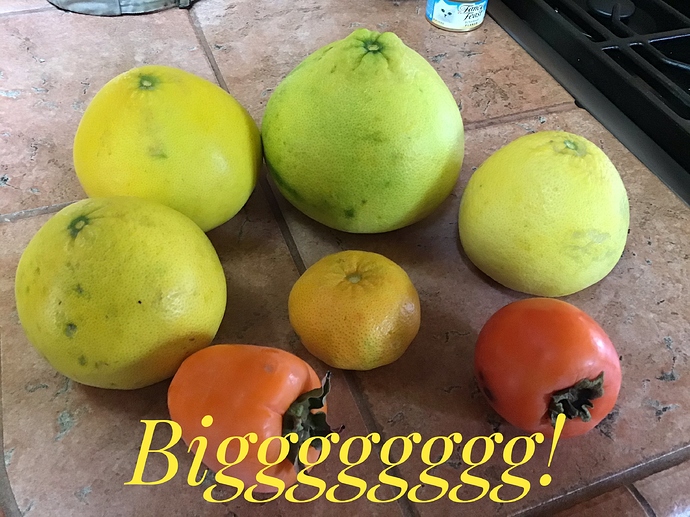 Congratulations! What pomelo variety is yours?

Bob you made my day with all those persimmon fruits. I think you will be here on this mother earth for another 20 years easy for being active hauling those pots and eating fresh fruits on a daily basis. I am near mid 50s and only take a multi vitamin daily and eat 8 different fruits and vegetables daily. My go to fruit is the fresh ripened papaya daily for the papain enzyme that keep the GI tract happy daily. No bad tasting prune juice needed.

Thanks Tony, love the articles you write and the fruits you are interested in. Keep them coming.
The pomelo’s I am growing are Valentine and Thong Dee. Thong Dee sionwood was given to me by Joe Real, the best citrus guru to me.
It is milder than grapefruit but has a orange/mandarin taste. 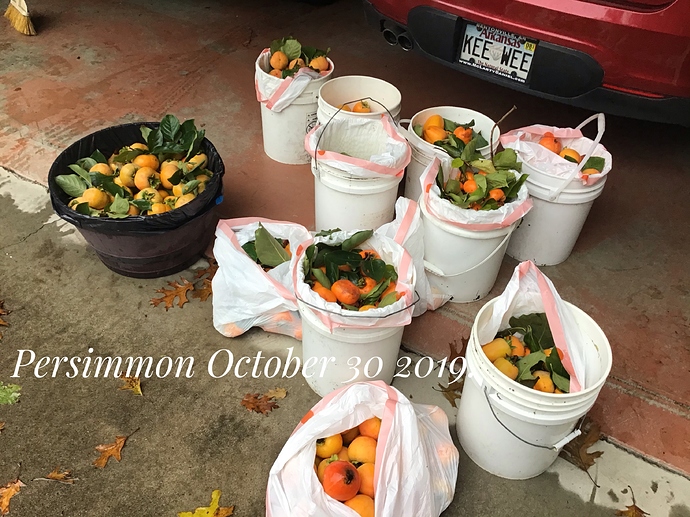 More persimmon for friends and neighbors to pick up.

Just fabulous! One of the best dining rooms I’ve ever seen!

Tony, a ripe persimmon after dinner has the same effect as papaya. My wife eats 5 or 6 persimmon, me the same, a day.

Other than a few pears the last of the fresh fruit from my orchard. Incredibly small but still delicious Indian free peaches 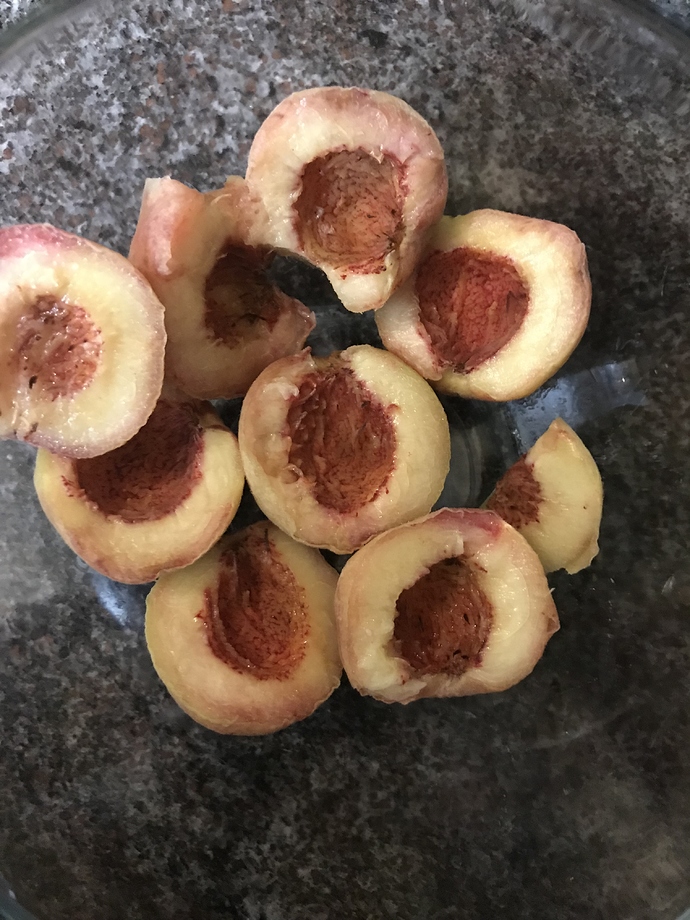 Just a few days ago I cut into the single Hunt Russet apple allowed on the tree struggling against several challenges (accidental root pruning when moved; encroachment of raspberry roots which I will tear up once the ground thaws). 21 Brix without seeming to be sweet, really complex and deep flavors, satisfying chew.

Perhaps I need to graft from it for another at the other corner of the yard.

Strawberries are next for me in early june