I really want to talk about these! Who has experience with them? I know them as just Bellflower, but I think they’re most often Yellow Bellflower, sometimes Golden Bellflower, and sometimes spelled Bellefleur or similar. I think at least one cidery in CA picks it early and calls it “Winter Bellflower”, for all the sense that makes. It’s probably most famous as the mother of Red Delicious.

My experience starts with my friend, who will be 94 this year, who has a big Bellflower in his small orchard. The tree was planted by his father, probably in the 30s or 40s. When I met him and his orchard, the tree was 30+ feet tall, a big spreading tree with a towering spire on top, and the trunk was rotted out in the center but had 3 separate trunk remnants supporting it. Over the years we pruned it down and it’s a lot more domesticated now, but man they’re my favorite apples of all time.

They’re big and egg-shaped, pale green ripening to yellow, sometimes a little pink blush on the sunny side. They are just the sweetest, juiciest apples I’ve ever tasted. Flavor is almost honeyed, and I estimate it has about 20% more sugar than the Jonathan/Mac/Gravenstein in the orchard. They press really well and have very high juice yield. They make a very juicy, almost watery sauce that you can either mix with a drier apple or run some of the cider pomace into the processor with it to soak up the extra juice. I use it as a base for blending a lot of my ciders.

I guess Scott had one and it wasn’t too impressive, which makes me wonder if it needs our California weather to really shine. I was pleasantly surprised that a number of people requested scion- I always talk people into taking some at our local scion exchange. I just love this apple, everyone should plant one

Thanks for the report. I already have it on my scion list for next year.

I grafted it to B.118 last spring, all 3 grafts took and were growing out as of last fall. Haven’t confirmed yet this spring that they survived our winter, but will know soon. Not sure yet if it will be hardy in my climate. I chose B.118 as I intended to grow it as a cider apple, but sounds like it will be more versatile.

That sounds like a great apple. I had looked to get a tree but was afraid it would not produce the quality of apple that it would get in an area that has a longer growing season, such a CA.

Holy cow, Bellflower on B.118 is going to be a BIG tree, it’s the most vigorous apple I’ve ever worked with. My first year grafts put on 3-4 feet by midsummer. Grows like nuts for me in California.

Based on Scott’s experience (I meant to link to it but forgot, on my phone now) I think it may not be such an incredible performer back east. For me it’s good for cider (but blend a little something for some body, I personally like to coferment with a little stonefruit), pie, sauce and fresh eating.

I can let you know in a few years. Grafted 2…B-118 or Antonovka I think, but I ain’t where I can check right now. (Thanks for the scionwood.)

(Thanks for the scionwood.)

Now you know the story of the scions

I read in a book years ago, maybe Roger Yepsen’s “Apples” that Yellow Bellflower has the largest/prettiest blossoms of any apple tree and could be planted purely for its ornamental value. Just a little trivia.

Not sure yet if it will be hardy in my climate.

If it’s hardy there, I’d be interested in trying it here (border of 3b/4a central MN)

I’ll let you know how it over-wintered here, nothing has leafed out yet. We had a relatively mild winter, our low was -17.5F, BUT that was before Thanksgiving. Otherwise, just lots of heavy snow. We didn’t see the -30’sF you guys did out west.

My yellow bellflower produces a large/juicy fruit. I like it straight off the tree but it is too tart for some. Mellows with age. GREAT for pies.

I see Fedco sells Yellow Bellflower and rates them to zone 4. I have come to believe that east coast zone 4 and upper Midwest zone 4 are two different beasts, but it may be worth trying here.

I worked through the nursery bed this morning and took a look at the Yellow Bellflowers. They don’t look good, the bark has split and they look desiccated. I’m not sure I’d take this as a sign they’re not hardy, below the graft on the rootstock (B.118 in this case) is the same way, and that rootstock certainly should be hardy in my zone. These were buried in snow most of the winter. I have this throughout my nursery bed and I’m not sure why.

I have grown Yellow Bellflower for several years. Fresh off the tree thy are a pretty bland apple. Then I read that after a short while in storage the apple is much better. Sure enough, after 3 weeks or a month in the fridge the apple went from “okay” to “very good.”

One of the moderators here, i think it was scott, linked a book from 1904 that has all the growing regions for apples. Long story short, yellow bellflower was developed in new jersey and should be ok in zone 5+ in the northeast. Ill see if i can find the link

TY for the link and info. I will give it a try. 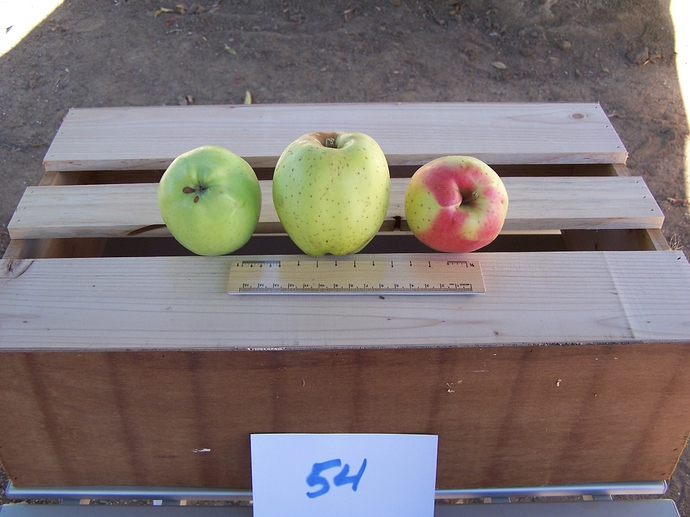 The center apple looks a lot like my bellflowers. The right one shows more blush than I usually see, but close enough. The one on the left looks very green and glossy to me; I don’t think mine are ever that glossy. Your tree is probably managed for sunlight a lot better than my [friend’s] tree.

As far as I know Bellflowers are first described in 1790s-ish in New Jersey, and that tree was supposedly already very old.

Interesting, I just finished picking the Bellflowers for the year and they have a fair bit of russet near the stems, which I don’t usually see so much of. I actually counted this year, it’s moderate/midsized (pruned heavily last few years, it wants to be a giant) for being on seedling rootstock and yielded a little over 20 bushels.

My little grafted trees are vigorous and healthy. Thought I’d pass that along.
Appreciated the scionwood.