I just tasted a couple of Russet apples today. Golden Russet and Ashmead’s Kernel. These were absolutely special. The aroma of each was unlike any other apple I had tasted. Very intense flavor sweet and tart with a wonderful aroma. Most unusual and extremely pleasant.
I did prefer the Ashmead’s Kernel. I felt the Golden Russet would have benefited a bit from keeping for a month or so. It had a wonderful aroma but maybe the flavor was a bit under developed.
I would take either of these apples over any Honeycrisp or similar apple.

If you like crisp, crunchy apples with a thin skin, these may not be for you. Some of the modern apples like Honey Crisp etc might be better tasting. These apples are dense, heavy with a thick coarse skin. But the flavor is truly unbeatable.

Totally agree. The russets are excellent and it’s a shame that most consumers don’t have the opportunity to try them.

I have about 8 Ashmead apples on a multi graft tree, I’m just not sure when they will be ripe for us. Where were the ones you sampled picked?

I have only eaten a couple of russeted apples. I agree that they are far more complex and interesting. I love Hooples’ Antique Gold. They honeyed taste on top of its firm, dense texture makes it a wonderful apple.

Russeted fruit has to be superior in other qualities if it’s to make up for the lack of eye appeal!

I picked the Golden Russet’s from my yard today. The Ashmead’s kernel was also from here about 3 weeks ago.
I am in the Seattle area of WA state.

I also planted an Ashmead’s Kernel in 2015, but it struggled along and never grew. I cut it back this spring in hopes of getting a new flush of growth. Instead…it died. I’m not sure if I’ll try growing that variety again or not.

In the humid region they can be the best looking apples if you aren’t doing summer spray for fungus. Fly speck and sooty blotch don’t build up much on Russets. If you want to see ugly, check out a Goldrush that received no summer spray here.

The Ashmead’s Kernel I ate came from a different orchard than mine.Golden Russet was from my tree.

Both are truly amazing fruit. Somehow the AK made a bigger impression on me. Perhaps because it was from a mature tree. My tree is just over a year old. (on B-118 rootstock). It was the very first apple that this tree has produced.

After eating these two, most other apples that I ate yesterday fell way short (with the sole exception of Rubinette)

I’m kind of happy about your comments ramv. I have five apple trees and (1) is an Ashmead’s Kernel and another is Rubinette.

Dax, I am eagerly awaiting fruit from Goldrush. Just got it this year.

I guess tastes differ: I know someone who thinks Fuji is the best apple in existence. For my taste, I really like the Russets, the Cox derivatives (queen cox, cherry cox) and Rubinette. I also have a few other highly reputed ones such as : Karmijn da Sonnaville. But I haven’t yet tasted it.

smsmith, I don’t think Ashmead’s Kernel is rated hardy enough for this far north. I had considered getting one, but didn’t, for that reason. I might try graft a scion, though, if I can figure out how to get them to survive. My first attempts at grafting were dismal failures.

I think AK is rated to zone 4, but whether that’s 4a or 4b I do not know. I also know that some nurseries will rate varieties “liberally”. My AK made it through a few winters, but perhaps the reason it didn’t grow much was due to winter damage.

I have an Ashmead’s Kernel on M111 from 39thParallel, I’m a zone 4a. Check with me in the spring to see how it handles the winter.

I still have about 8 Ashmead’s bagged on the tree but about a half dozen more are unbagged and getting hit by yellow jackets. I decided to try one today. It was 16 brix, I’m going to try to let the rest get closer to 20. At 16 brix it is still a little on the tart side but very tasty. I ate a 16 brix Gala side by side with it. Both were good, but they tasted like different types of fruit altogether. 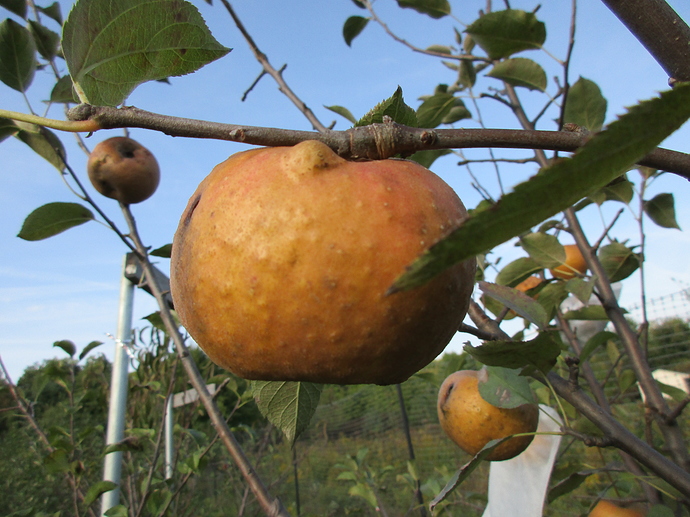 My apples on M111 have burr knots. I found a thread about them here.

What I’m saying is Andy bury the entire rootstock at planting time.

They’re not in their permanent location yet (still in the nursery bed), but that’s something to consider when they get moved to the orchard. I initially thought that would negate the effects of the rootstock, but perhaps not. Treco notes: “EMLA 111 is recommended for situations where its vigorous growth is needed to overcome the poorer cropping capacity of dry sandy soils in low rainfall areas.” We have sandy Adirondanck soil, but not dry. I need to propagate 2 more, my goal is at least 3 of every variety.

I would consider doing it.

Golden Russet was probably the single largest inspiration for my apple obession. Here I’ve not had ashmeads that could truly compete. Here, so far, I’d rate AK very good and GR best. GR is also extremely sweet. GR is weird to grow though. It doesn’t like to grow as a neat compact pruned form. It’s lanky, rangy and not very productive. I’ve had terrible luck growing two different GR , bears and pack rats and more bears and packrats. If I were superstitious, I’d say there is a malevolent force trying to keep me from my Golden Russets! A bear just broke the tree I regrafted after it was broken by a bear previously. Packrats stripped another tree of all the fruiting spurs in two different years.

Sorry to hear about your back luck with the GR. I have only a small tree with the GR on it. The last two years I have had apples on it and my results were as you have had. Something has eaten every one before I got them. I did pick one last year that was high on one branch and it was GREAT. Now I sense I am not the only one jinxed with not getting any fruit to use off of it. My tree is very small still so it looks odd at this point, like a gangly teenager.