Recently on another thread Help me find a pear I'd like to grow - #41 by clarkinks an older series of Canadian Pears were brought up that are not widely grown or even known about. I requested a couple of these varities from ARS GRiN this year and will be growing them shortly. A large amount of time and resources were sunk into growing these pears and I wanted to start a separate post on them because of that. Some of these are a cross of Zuckerbirne x Clapp Favorite or Kurskaya x Flemish Beauty which potentially could be high quality pears. The attached descriptions should help to define which pears are the best of the series.
https://npgsweb.ars-grin.gov/gringlobal/accessiondetail.aspx?accid=%20PI+617571
https://npgsweb.ars-grin.gov/gringlobal/accessiondetail.aspx?accid=%20PI+318838
https://npgsweb.ars-grin.gov/gringlobal/accessiondetail.aspx?accid=%20PI+617572
https://npgsweb.ars-grin.gov/gringlobal/accessiondetail.aspx?accid=%20PI+541347
https://npgsweb.ars-grin.gov/gringlobal/accessiondetail.aspx?accid=%20PI+312505
Thanks to @jocelyn for bringing up a couple of these varieties because I was unaware of them. At least one of these are virus infected so be aware of that if you request the scion wood from the usda and make sure your requesting the ones that are not infected if that’s your goal. I combed through the main catalog to find them http://www.ars-grin.gov/cor/catalogs/pyrcult.html.
Enie
http://growingfruit-images.s3-us-west-2.amazonaws.com/original/3X/1/d/1db6906d49c64de71e4eedc97401629c7a7fce16.jpg
Miney
http://growingfruit-images.s3-us-west-2.amazonaws.com/original/3X/3/e/3e662a8eb4ddcdd0d44cd82ba87214dc0e344bb1.jpg
Moe
http://growingfruit-images.s3-us-west-2.amazonaws.com/original/3X/b/3/b301bedfc1f49e53321bb1ed1433c100b1c40bff.jpg
This was another picture they listed “Image for: PI 318838 - Scanned black & white figure from F.S. Howlett. 1957. Ohio Ag. Exp. Station Research Bulletin 790.
Taken by: Howlett, F.S., on 1957.
Inventory sample: PI 318838 **
Comment: Photograph showing fruits of pear cultivars: Enie, Miney, Moe, Tyson, Philippe Chauveau, Early Seckel, Caywood, Menie”
http://growingfruit-images.s3-us-west-2.amazonaws.com/original/3X/f/2/f224c960c324da491b3112fe15423e302736e8b5.jpg
Phileson
http://growingfruit-images.s3-us-west-2.amazonaws.com/original/3X/8/c/8c7d891168540ba926b16d41fbfdf276212b5f82.jpg 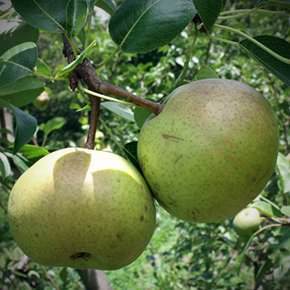 http://www.hardyfruittrees.ca/catalog/pear-tree/savignac-ronde-verte-pear-tree-zone-4-flavourful-disease-resistant-pear. Researching these pears could lead to the discovery of many others. A pear called Savignac can be obtained here in the U.S. http://www.sln.potsdam.ny.us/pears.html. Moe was actually used in Canada as rootstock http://lists.ibiblio.org/pipermail/nafex/2009-January/033955.html. The following seedlings are undergoing extensive test: 0-291 and 0-292, both from Winter Nelis x Bartlett; 0-301 (Menic x Winter Nelis); and 0361 (Miney x Phileson). Grosses involving the hardy variety Karl Sabioski, Bartlett and high-quality 0-291 were effected in 1950. " - https://www.cabdirect.org/cabdirect/abstract/195616036671. These were pollination requirements “Author(s) : HUNTER, A. W. S.
Book : Progress Report. Horticultural Division, Experimental Farm Service, Canada, 1949-53 1955 pp.20-1 pp. ref.bibl. 3.
Abstract : The pollination requirements of the pear varieties Enie, Menie, Miney, Moe and Phileson have been studied. Enie, Menie and Phileson were each satisfactorily pollinated by any one of the other 4 varieties. Miney gave a satisfactory crop when pollinated by Enie, Moe and Phileson, while Moe was pollinated satisfactorily only by Menie and Phileson. Phileson, and to a lesser extent Enie, Menie and Miney were self-fertile, while Moe was self-sterile. All varieties were regularly capable of producing an appreciable quantity of mature fruits from emasculated but un-pollinated flowers; these fruits were seedless. Seedless fruits were also produced by self-pollinations, by Menie pollinated by Miney, and by Phileson pollinated by Enie, Menie and Miney.
Record Number : 19560302472” - https://www.cabdirect.org/cabdirect/abstract/19560302472
There is vague mention of the pears in some old NAFEX threads http://www.ibiblio.org/london/NAFEX/message-archives/old/msg00010.html2 & Re: [nafex] Minie / Miney pears. Another mention of the series http://cjoliprsf.awardspace.biz/Documents/SavignacPears96.pdf & http://www.cjoliprsf.ca/Documents/PearArticle07.pdf

I’ll be interested to follow this and see what you think of those pears. I was under the impression that they weren’t desirable for eating out of hand, but I may well have been mistaken.

The trees have been bred from desirable desert pears. I’m not sure what to expect yet.

I’ll be grafting the Savignac you mentioned this year, scions obtained from GRIN.

Taste is such a subjective thing, that you’ll just have to eat them and form your own oppinion.
Weather during the last few weeks of ripening has a huge effect too. A series of cool nights the last 2 weeks makes a huge change is sweetness.

If it’s too hot, especially at night, they can go from just right to mushy in the middle litterly overnight.

A day or two not quite ripe, a day or two just right,and eating as many as you can, and 2 full days in the kitchen bottling them.

I suspect they are similar to the parent pears, which can be very high quality and extremely difficult to pick at the right time. Clapps favorite has left me either disappointed or very happy with its fruit. It does the same thing rotting in middle if not picked at the perfect time. Many pears are like that.

Let us know how Savignac does for you. It should be a good one.

As mentioned I’ll be growing Enie, Menie, Miney and skipping Moe and Phileson since they are virus infected.

Ive heard rumors there are two pears called Savignac one which is very good and one not as good.

I recently read something along those lines as well

Come to find out Moe and Phileson are not actually virus infected they were just originally labeled that way. I will request those and Savignac next year. These pears may be from the same program but they are very different pears. Note the color and growth difference in the scion wood. 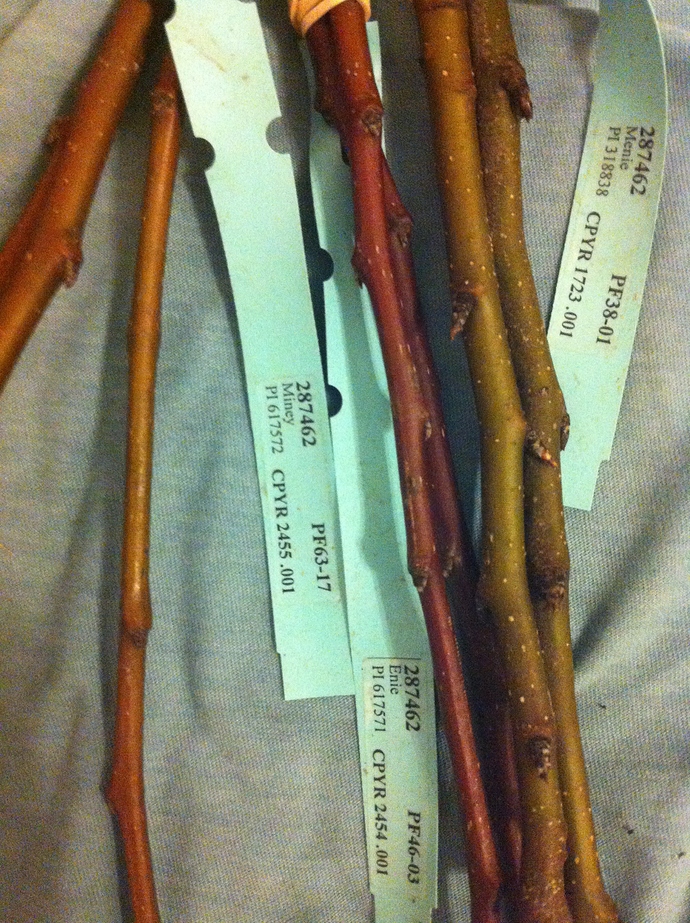 All of the pears had at least 2-5 successful grafts per variety. It will be interesting to see how long it takes them to fruit.

Menie pears are growing like crazy. I’m learning a lot about these type of pears but they do get fireblight.

Savignac was unavailable when I ordered this year. Savignac pear still eludes me! I ordered PI 312505 Phileson & PI 541347 Moe

Looks to be the same as the one I’m chasing based on what the parents are, when and where it was developed and by who Savignac Ronde Verte Pear Tree - Flavourful disease resistant pear- Nursery

“The Fruit
Savignac Ronde Verte is a medium sized pear with a rounded form and greenish/yellow exterior. The flesh is white with a pleasantly crisp and juicy consistency and very few grit cells. The pear is sweet and aromatic, good for both fresh eating and preserves. Fruit are ready for harvest in September and keep for about 2 weeks.

The pear tree
Savignac Ronde Verte pear tree is vigorous and highly productive with an upright growth pattern. It is hardy to at least zone 4. The tree shows an excellent resistance to disease. It is self-sterile and needs a pollinator to produce fruit.

Its origin
Armand SavignacThe origins of this variety are not entirely clear but it was almost certainly one of 4 trees given to brother Savignac in Joliette, Quebec by the Ottawa experimental station in 1947. Savignac who is also famed for his work in the development of grapes and tomatoes unfortunately lost the tags for the trees, hence the uncertainty as to their original names. It did not become commercially available until the 1990’s. The parents used in this breeding program were: Flemish Beauty, Kurskaya, Clapp’s Favorite, and Zuckerbirn.”
When I tried to order I got a blank page https://npgsweb.ars-grin.gov/gringlobal/accessiondetail.aspx?accid=%20CPYR+2922

Ronde Verte just means round and green in french if you wondered. I’ve grown clara frijs for years but no fruit yet. It’s been a good disease resistant pear! Josephine de Malines is a legendary pear I will be grafting this year I hope. Wish we could have found https://npgsweb.ars-grin.gov/gringlobal/accessiondetail.aspx?id=1725676 before January 25th. Thanks for finding that I will order it when I can. There is always next year or perhaps I can tbud it.

I strongly suspect my small yellow unknown pear is related to these Canadian pears but that remains to be determined. Take a look at my unknown pear Pears Extraordinaire 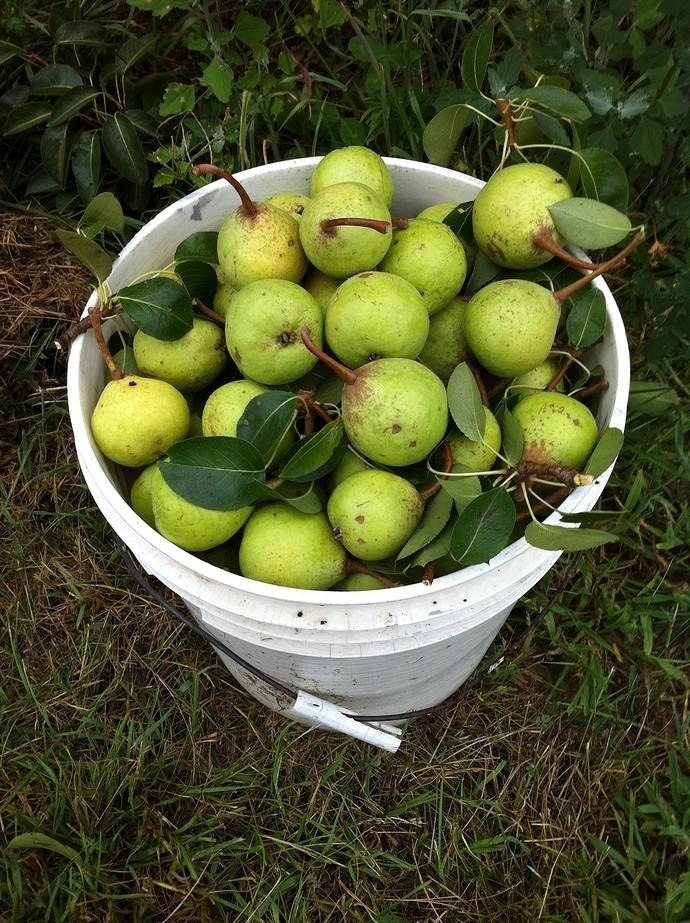 . It may have some common ancestor also. Menie is similar in some ways eg, scion color etc.Look hard at my yellow pear and then look at this savignac (the elongated variety) http://www.aujardinmandeville.com/popup/poirier_savignac.html 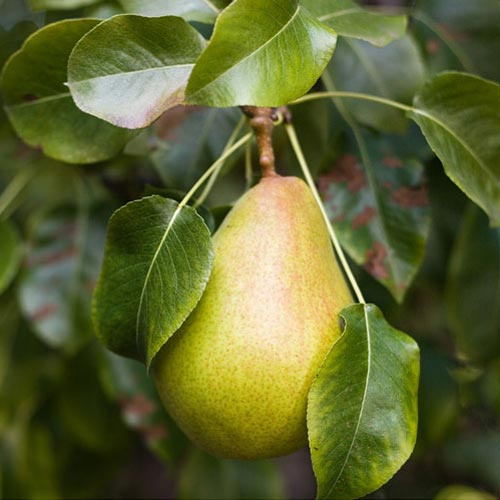 Which is clearly not the same savignac as this one (round pear and not elongated) .
The foliage appears to all have common ancestors. Pear tree 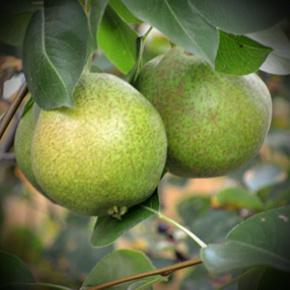 I requested Sauvignac from GRIN last year. I have no idea if Sauvignac and Savignac are the same variety, but I have seen the same description used for both spellings.

oops…should have read all the posts before mine. I see this was already covered.

I got Sauvignac scion from Bob Purvis 2 years ago . I also got Hudar . Both are on the same callery tree . Hudar has grown more . Hudar may bloom this year or next . Sauvignac will take longer . No spurs yet .

Anyone reading this from Canada may be interested to know pears such as Phileson are now available as trees again Collection Pears - Hardy Fruit Tree Nursery. I would love to get my hands on the the original descriptions that were published in: Spangelo, L. P. S., W. R. Phillips, and D. S. Blair. Pears. Progress Report, 1949-1953. Central Experiment Farm, Ottawa. P. 32. See the Nafex email below between Richard Bell and Claude Jolicoeur from 18 years ago.

Minie is moderate in size (2 1/2" diameter), globular, obtuse, with no
neck, greenish-yellow, with some red blush, tender, sweet, and juicy
flesh, fair flavor with some hint of astringency, with poor keeping
quality, softening “almost immediately” after harvest. It ripens very
early (1st week of August in Ottawa). Howleet notes that processing
trials in Ottawa found it to be satisfactory.

Minie is a seedling of Zuckerbirn x Clapp’s Favorite. Fruit and tree
description is similar to that for Menie.
Both have been reported to be at least moderately resistant to fire
blight. (Mowry lists Minie as susceptible.)

Greetings all. We recently purchased pear nursery stock which appears
to
exhibit pear leaf spot symptoms - raised brownish spots on most
leaves.
Couple questions will sulphur control the problem or is the nursery
stock
likely going to have recovery problems from this condition? Typically
how
devestating is leaf spot?

Other question is anyone familiar with the Minie and Menie pear
varieites?
What is the parentage and how do the trees typically perform?

These are likely still a little ways from producing. Looking forward to trying them. Still no luck squiring Savignac Scion wood yet.

@ILParadiseFarm
Sounds great I appreciate the offer. I tried to order sauvignac twice from grin but the page was down. Went ahead and made my order without it. Now I’m looking again and the page is up.