Just wanted to show size comparison between James Claypool’s ‘A-118’ (‘Elmo’) persimmon and the wild American persimmon. Both are Diospyros virginiana. Although ‘Elmo’ is a significantly larger fruit and has more flesh, I feel the wild persimmon has a flavor that is perhaps slightly more intense. ‘Elmo’ is very good, non-the-less.
(The fruit above the quarter is ‘Elmo’) 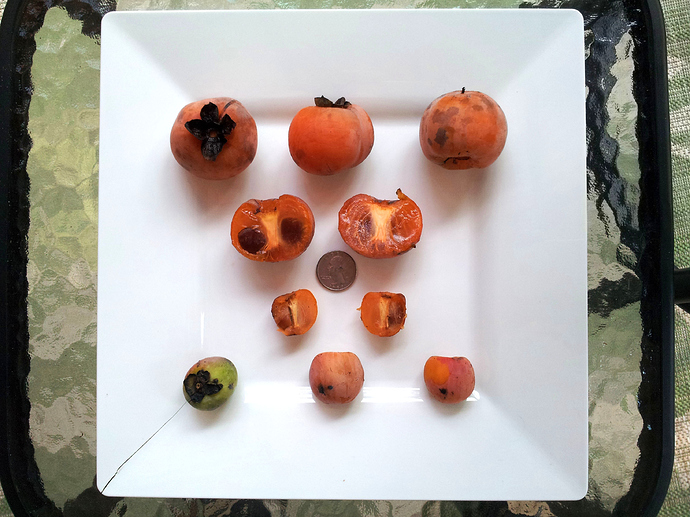 A couple other observations on ‘Elmo’: After tasting several more persimmons this morning, I realized that the “wild” persimmon needs to be perfectly ripe to lack astringency; not so much with ‘Elmo’. Also, ‘Elmo’ has a clearer complexion than “wild” persimmons and I am more inclined to also eat the very thin skin, other than just sucking out the flesh of the “wild” persimmons. And back to my original statement:

I feel the wild persimmon has a flavor that is perhaps slightly more intense.

Both varieties may taste exactly the same and it may be I am just more focused on the tiny amount of flesh in the “wild” persimmon. Either way, ‘Elmo’ is by far the more desirable fruit to eat than the “wild”…I have four other producing (Oriental) persimmons and ‘Elmo’ scores the highest with me with regards to flavor. 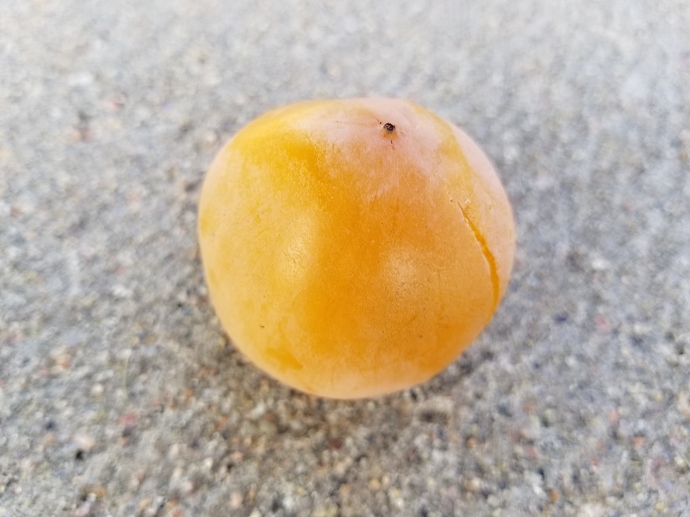 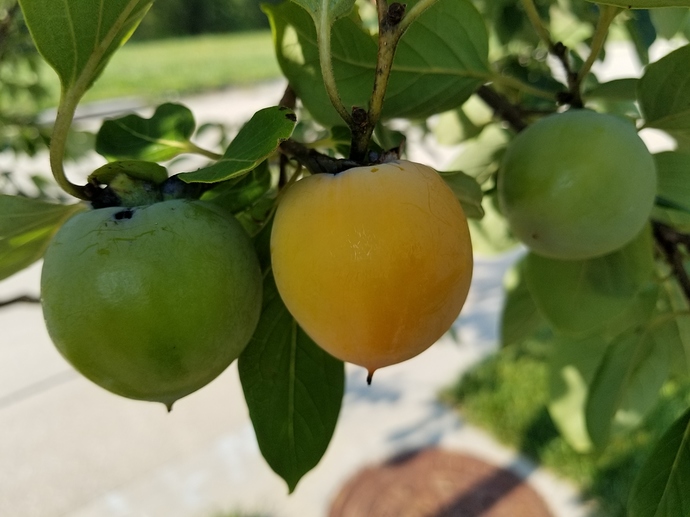 Beautiful! Please tell us more about ‘Prok’. Justfruitsandexotics lists it as an “American-Kaki Hybrid”…which could be what ‘Elmo’ is also. I read it was early ripening…Are your pictures from this year? Is the flavor more similar to Kaki or virginiana?

Yep, this year fruits. Probably one of the earliest in Zone 5 and the best eating right off the tree without any astringency when soft ripened. It is also larger fruit then some D.V. they called it a Hybrids but I think it is a large DV

This reminds me, I had an Elmo planted at my Mother in law’s house years back (she passed 6 years ago) and I havn’t even looked in on it in the past few years. My best friend (who is my ex-wife’s brother) owns the house and told me he was leaving it in. I should call him and see if there’s anything hanging…

Prok is sometimes labeled as a hybrid because the large fruit has very much the same shape as on oriental persimmon (some particular varieties at least…). To my knowledge it is still an American persimmon and so far no DNA analysis has proven otherwise. Prok is also getting color on my trees now…extremely early…One thing that would also prove the point of Prok possibly being a hybrid is that unripe (still greenish) fruit will also ripen of the tree like Asian persimmons. An American persimmon will not ripen further when it is harvested still green, except for Prok apparently.

Somebody told me Prok would produce fruits even without another pollinator tree. Is it true about Elmo as well?
How would you compare Elmo to Prok?

Elmo is about the same size as Prok but it is a flat type fruit. It also ripens later… I have no preference in taste but prefer Prok because it is earlier…

I can’t even guess how many times I’ve written this but, Jerry Lehman said while visiting him that there are no needs for any pollination among (American) persimmons. He stated that if I planted all female cultivars that I would get nearly the same crop count as if my trees were pollinated. The very difference being with pollen I’d have all seeded fruit. W/o pollen, you’ll have a seedless orchard of persimmons. Jerry even went on to say another friend of his growing persimmons commercially - planted only female trees in his huge orchard and had all seedless fruit.

Prok is a part of the Early Golden family, Vladimir. It’s gonna have male flowers showing up and it’s going to pollinate anything, including itself. Some people report not many seeds in the fruit of a solitary Prok while others have differing results saying they get a pretty good amount of seed in their Prok fruits. I suppose a lot of that could be attributed to how many staminite flowers show up on individual trees, yearly.

Did Lehman think there was anything to some who feel that the seeded fruit are bigger or taste better in some way? If you compare the taste of any american to a “bland” asian persimmon, maybe it doesn’t make much difference either way.

Allow me to tell you what I do know direct from Lehman.

Jerry was adamant about all American persimmons being exactly how I described. That came right from his mouth. Later I began reading about how the PNA and PVNA persimmons work. So I called him and he had no idea about how any of that stuff worked. And what I read I’d need to read again since it’s been more than 2-years, possibly 3-years since I read. That’s stuff takes a lot of focus
and re-reading, & re-rereading, again. It’s that sort of material. And of course, Jerry didn’t need pollen for anything there. There was pollen all over the place.

size and taste definitely not for all American persimmons he told us. That’s where that PVNA and all that comes in and is for people growing those in what zones 7 and above, I suppose.

Jerry could grow Rosseyanka where I can’t. He was barely in zone 6a from my 5b. He had a small and rural neighborhood area of about 8-10 homes like you would see in the city surrounding half of his orchard and the other side of his orchard had a lot of woodland trees. So, he had a lot of help keeping his environment warmer than it should’ve been. He could grow that dang Nikita’s Gift, too. Besides Nikita’s Gift or Rosseyanka or his ‘Dr. Kazas’ hybrid, he never mentioned anything else he was growing that wasn’t an American persimmon.

He was adamant that flavor doesn’t change and being seedless was the way to go. I am honestly not 100% on the fruit size part of your question but it seems to me that he could have said that.

Prok - variety description: “A seedling from the Cornell University breeding program grown out by John Gordon of Amherst NY. This early ripening cultivar is recommended for growers on the northern edge of the persimmon growing region. Fruit measures 2.5 to 3”, large for an American persimmon. Self-fertile female tree will produce seedless fruit without a male pollinator. ‘Prok’ is rated as one of the best tasting American persimmons."
I’ve been growing Prok for more than 10 years and I’ve never seen any male flowers on it.

Thanks! I should worry more about seedless, and I would prefer that if all things are equal, but I’m still skeptical that I will have great success even getting persimmon to survive in this climate and soil…so I’m hedging my bets and over planting, and trying different varieties to see what will stand the test of time. I had some winter kill or something last year that I haven’t figured out yet (lost all my Yates grafts for some reason which makes no sense). So, adjust some things and move forward. So far, things look great, so I admittedly could be thinking of seedless. But, I guess if I have seeds, I can plant more trees!

I actually already planted Elmo recently in my “guerilla” site in a nearby park (don’t have any place left in our home garden.). I also have four much smaller seedling trees of wild persimmon around there. They survived for one year unattended. I was worrying that a bigger Elmo won’t have pollen available to set fruits. Now you explained to me that it won’t be a problem.

Self-fertile female tree will produce seedless fruit without a male pollinator. ‘Prok’ is rated as one of the best tasting American persimmons."

I kind of wonder about the long term hardiness of Prok, but maybe it’s ok. It seemed like the latest to try to harden off for me besides Deer Magnet.

It’s a hardy one! I think they all pretty much are. I see no reason why most any cultivar shouldn’t grow in zone 4.

I’ve observed on my best tree that the fewer seeds a fruit has the smaller the fruit is. I believe this tree to be a Yates seedling, though I can’t be sure. It will hold its fruit until the animals remove it, whereas my other trees drop their fruit as soon as it is soft and ripe. This is in Wisconsin, zone 5b.