Elsewhere (Large rootstocks from Fedco - #23 by marknmt) we started talking about clefting when the diameter of the rootstock is several diameters greater than that of the scions. That raised some more issues in my mind.

I’ve seen pictures of people grafting to tree stumps a few inches in diameter. The scions, of course, were only 1/4" or so. That’s problematic for me because when I try grafting with much smaller differences I still end up with a slow-healing split between the scions.

I got to wondering whether I should cut my scions down to the thinnest slivers I could manage, which would minimize the width of the split. I also wondered if it would matter if the cleft were horizontal or vertical, or even off-center. What other factors should I be considering?

I was watching a video of cleft grafts and they had a different style. They were making the split close to the bark edge instead of the middle. It was kind of like a cross between bark and cleft and it left a very small split because much of the split was bark.

Hi Mark,
I do not quite understand what you mean by “split”. For grafting onto a new rootstock, I usually try to match the diameter of the scion to the diameter of the rootstock. Your question involves a larger than scion rootstock diameter. So the way I think about your inquiry is that you have several cleft graft choices of which either should give you a strong graft:

This thread will help answer your questions Top working Pears weather permitting . The smaller your scion wood the better. Not everyone will understand what you mean but the thread I posted will help though its not specifically about cleft grafting. I used a saw, cheap butcher knife, screwdriver, pruners, parafilm, plastic tape. Toilet seal wax, Tanglewood pruning seal. There are a million ways to cleft graft but that’s my way. 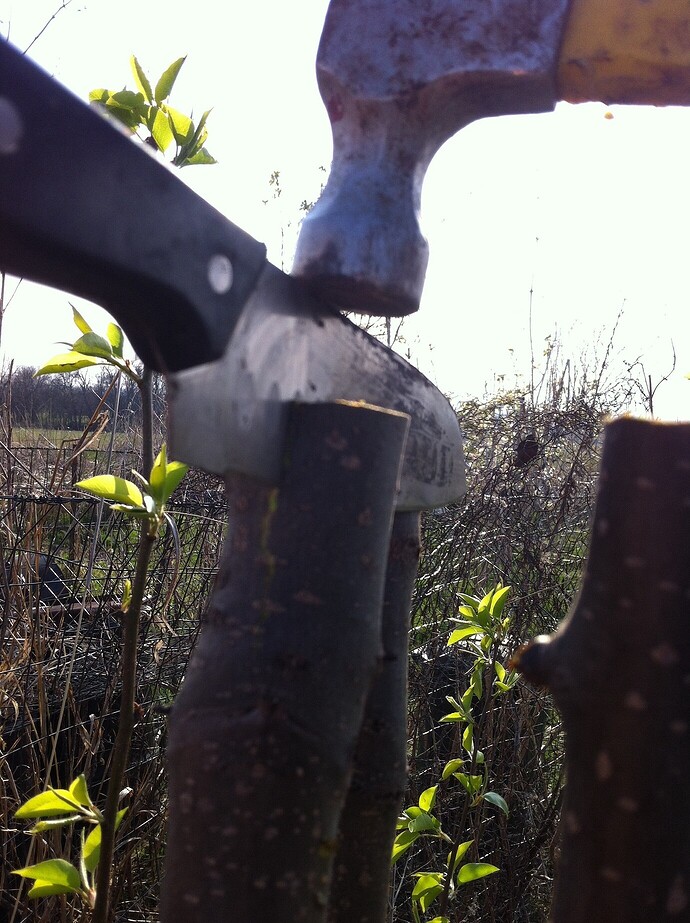 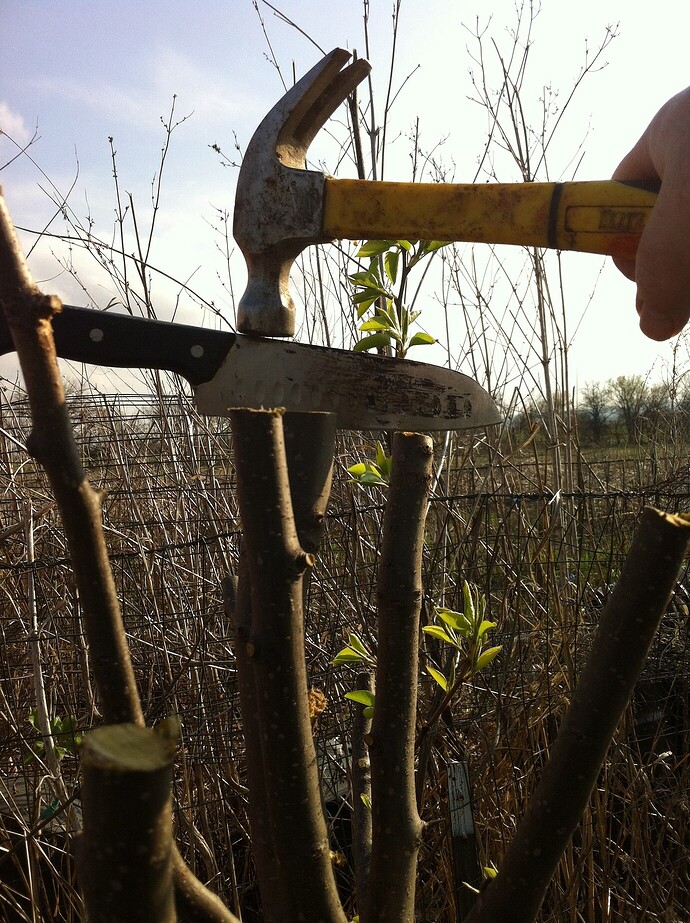 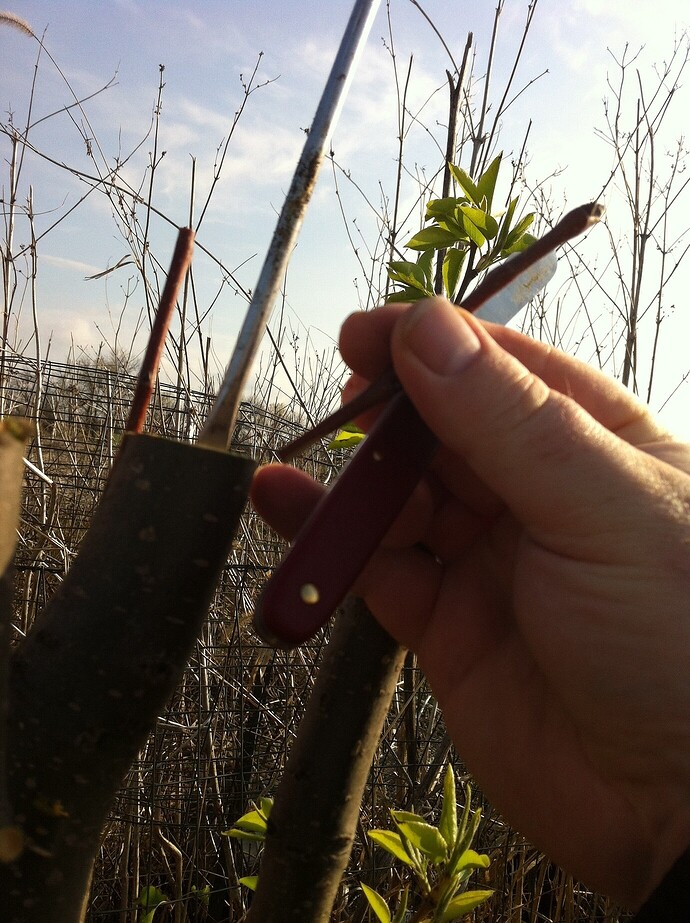 Always split your wood horizontally not vertically. I’m going to let Stephen Hayes do a better job than I can explaining it. It will make what I posted make much more sense. Typically I’m cleft grafting for two reasons which are someone sent me tiny wood and I have really to large of rootstocks that need top worked

Why don’t y’all bark graft? Make a longer cut or start with a 3/8ths scion and curve out a shoulder on the scion and draw/taper that “long” to a point. It looks like a c is shaped out of the top of the cut and that’s how you start. You curl your knife and make a curve and then draw the knife straight down for 2.5" or longer. The longer the better. Then you skim the bark off the other side. From the side it’ll look like about 2mm in width, maybe 3 and a c-curve at the top, called, a shoulder. The c “rests” on the sapwood/pith and the long taper type point is between the bark and sapwood/pith. All you do is cut straight down 3 or 4" and peel the bark back (cause it’ll be loose) and then slide/slip your scion between (bark and sapwood/pith.) Then cover the carpentry and over the cut on the roostock, and no air will get in. I parafilm the scion, first, leaving 2-4" for my cuts depending on the caliper of the scionwood.

This way you never have a big old hole in the tree. Not aiming at you clark but to say you will always have a screwdriver width hole thru the middle of the tree is no good.

You want to create a ring of callus across the flat top of the rootstock and to that you must connect the circle with sticks/scions. You cannot expect a 3" caliper tree to create its own callus ring the whole circumference of that size trunk with 2 or 3 or 4 scions… there’s not enough togetherness/closeness of scions to create a ring all the way around - a living ring of living tissue that heals on its own and since you’ve kept the entire tree alive across the top like that, you’re going to give it a chance to engulf itself. That’s what callus is all about. When you have a deer wound or rabbit, you cut the area clean and find a complete circle of “green” that’s visible to the human eye right there at your work. If you see all green & all the way around in a circle… then you know you’ve done your work correct. That circle will create what looks like a vein popping out from under skin and it continues to get bigger and bigger until eventually it’s covered the sapwood & the pith. It’s fully closed the deal and the tree has 100% heal power back again. And the scion is a living part of the circle and of the very long distance of cambial connection you created with a long cut…

All the other scions are like seeds sowed. You choose the best one and cull the others. You wait until the following year to completely cut off any single one but it’s up to you how to control the growth of all the scions forming around the graft union area of all your cutting & work.

You want to make a 3/8ths caliper stick a long 2mm thick only piece of carpentry with a “c” curved shoulder at the top that rests upon the sapwood/bark. That’s why you start your stick carving out a c
first.

Both grafts have their place. A cleft heals in half the time usually of a rind aka bark graft. Cleft grafts are stronger in my opinion in many cases for the first 2 years.

Wondering what your grafts will look like in a couple of years? General Fruit Growing

I don’t want to win. I can’t win to lose & I can’t have nothing more I can say. I’m sort of speechless again. Just like when I finished reading this.

When like @BlueBerry is finishing a graft all the way across his rootstock with two scions so the scions actually touch and so the cambium on both sides fuse and since the distance is short this time, then he’s completed his work correctly. That’s my last comment. In a friendly but speechless way, Clark.

Carpentry should be as close to exact as possible every time you go to work on a tree. I’m sorry, I’m ducking out for I have nothing I know more than what I stated and unfortunately, I’m not accredited. I need my “overalls” bib’s ‘certification’ from guys that wear them, I guess. Maybe then, maybe.

Your a great grafter and I realize our situations are different and trees grow differently. My opinion is the wood pinching the scion wood between like a clothes pin is better against the wind and birds than just the bark holding it. Remember no pruning or anything is done on my property due to fireblight until things are dormant 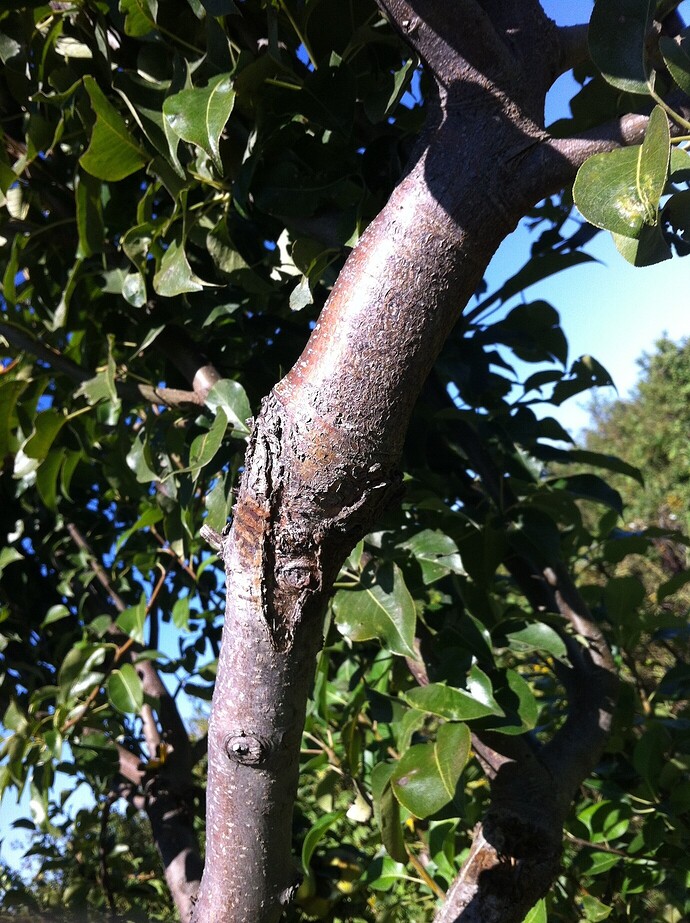 How fast do those clefts you stick on the sides on any tree there of 1" caliper or 2"?

I’ll typically see 3-5’ from a bark grafted anything. 3 if less vigorous tree and 5 if more vigor for roots or tree vigor.

That branch is about 3" or 4" but remember this is a pear so it’s very soft wood nothing like a hickory or harder wood like you work with a lot. When it’s harder wood like a 4" or 6" mulberry then I change to rind aka bark graft quickly as shown here Che, mulberry, osage orange, fig grafting . Every tree and every situation is different. That year was hard on those Duchess d’ angoulme grafts some of that scion wood was as big as your thumb. I don’t like the way it grows or breaks. Duchess is very soft wood. It stays dormant longer then grows out very weird. The guy who I got the scions from has breaks every year because the pears get so big and the wood is soft. Those cleft grafted trees are these trees A windfall of windfalls!

No, no, no, no. I’m curious what happen on a 1" branch where you put (2) clefts. I wasn’t talking about the picture that’s healed fine, Clark. I’m curious about that stuff you hammer into and stick clefts on them. How much do they grow? I thought I was clear.

I’m trying to learn something!

They grow like crazy depending on the pear. Almost just like a rind graft. You know how a rind graft on the tree stump looks like a clump of wax melted down on the tree? A cleft fills that space in the middle “the gap”. So a cleft is a solid branch in a year if its 2" with waxy grafting wax melted in the bark. If the 2 sticks grow one needs cut off and the second is left. One side might die in which case you wiggle it out and let the other grow.

Ok,
thanks,
I’m done. I wanted to learn something.

You guys have at it. I mean it. I’ll do what I do and you all be happy too. ha
alright then, okay, amen, praise mother earth.

Lol. I like bark grafts much better, because apparently I don’t cut the wood for cleft grafts quite straight enough, or the right angle. Or I wiggle them when I wrap them. It’s a great graft! I just suck at it

If you watched me do both grafts came back in a week or 6 months you would understand. Then you would really understand in 2 years. Given both trees are 4" or 5" pears A bark graft aka rind graft is very slow to heal comparatively sometimes taking 5 years or more. A cleft you can barely see in 2 years and you have pears already and it’s supporting them. See the cleft gap fills the graft is already solid tree but even if it didn’t that pinched wood was very strong at the time. The rind graft still looks like pooled wax on the stump of the tree it was grafted to. Now if the fruit tree is 12" no doubt we are doing bark graft we cannot split it. If I can split it and do a cleft I always will. A cleft properly done is pinching very tightly together you might get by with no grafting tape not that you would want to. The idea is split it just enough to slip the scion in the cleft but don’t split it anymore than you have to. I use a screw driver to hold the cleft open but should my finger be in that cleft it would pinch me and leave a blood blister. That’s how tight I want it.

I think you got very valid points, Clark.

I don’t doubt you’ve lived very easily how you have so far. I have no doubt. Thanks for answering my question.

I am too clean. I look at trees before I do anything. I stand there and take a long look. Then I go to the cooler and look at all the scions in every bag, and then I step away again and think. And I do this bs until I have a picture in my mind of what the rootstock will look like and where my grafts are going to attach and how. I like nurse branches, I like long connections, and I’ll stop right there with my brakes on full.

I knew speed could come up in some sort of grafting sense/example… there’s your thing, ya know. I breathe differently I guess. We could pears anytime as buddies though.

The next time someone sends you pencil lead scions think of me and the cleft. When your rootstock is an inch across and in your bag are scions so small you don’t know what to do remember this.

Okay. I’ll look very closely at your ideas and mine!