I know you can graft different types of fruit to the same rootstock with bud grafts when the bark slips but those grafts have failed 100% for me over the last 2 seasons. im familiar with bench graft and top working though so can i graft a new plum scion onto the end of an apricot branch w/ bench graft?
what about new apricot onto the end of an existing peach branch?
peach onto an existing almond?
what about plum onto existing almond

if possible, is there a chart that shows compatibility of what can be grafted to what? Im trying to figure out how many scions i can order this year.

The info is under the Reference category.

I’m working on this, research is slow going and I don’t know when I will get the charts uploaded. I hope I’m not limited to a certain number of edits because I will be coming back and forth to this for a while I imagine. Anyone with “Yes this works” or “No this doesn’t work” can send me a message and I’ll include it in the references section for proper credit. I’m hoping to include specific variety names and their compatibility into the reference section. Charts Outlining The Compatibility Of S…

I’m familiar with what can be grafted onto the rootstock.

I’m asking if scionwood can be attached to scionwood.

Ur saying if I can graft plum and cherry to the same rootstock then I should be able to graft plum directly to a cherry branch?

While research is continuing to answer most questions, most probably you can in the meantime use appropriate interstems that are compatible with the majority of stone fruits. For example I am having success top working my sweet cherry trees with both Adara and Cherry plum scions. Then as those grow one year old wood I am grafting various varieties of peach, plum, pluots, plums etc to those interstems. I am sure that I may run into some incompatibilities, but so far the majority are working. Maybe you should narrow you question down to exactly what you want to achieve, and chances are someone knows how to do it!
To answer your question about scion to scion, the answer is yes as long as the scions are compatible and the base scion is compatible to your rootstock. My example above illustrates this. This pic shows a Flavor King scion summer grafted to an Adara interstem that is grafted in the spring onto my Sweet Cherry tree that I am converting from cherry to plums. Hope this helps 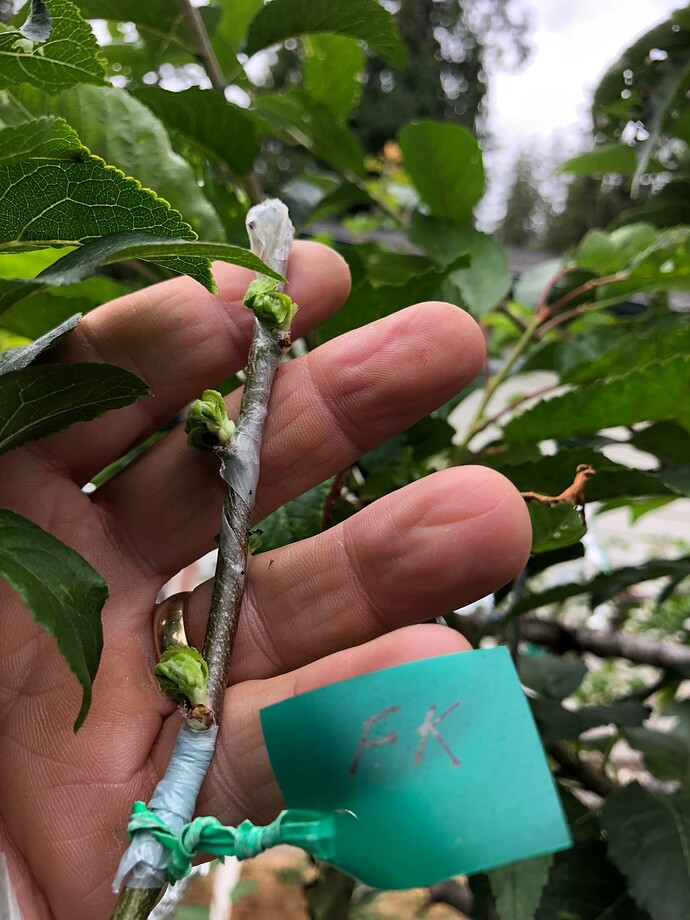 Ok to the inter stem - I can graft some of those this year but as far as scion to scion if compatible… is there a chart showing something is compatible?

And compatible at the plum level or is this variety specific?

Are you in this case trying to topwork an apricot tree? If are you desiring to add multiple varieties? Do you care if they cross pollinate, or not? Those are my first questions to narrow down what you want to do on a apricot rootstock.
Since many plum varieties cannot cross pollinate others, it’s first important to know how productive your new tree wants to be.
Personally, when I desire to graft multiple varieties onto a single rootstock, I start with the cross pollination charts because I am trying to create multiple variety trees where the varieties are good cross pollinators, where the pollination charts do not address my question, I then ask questions to other members who have the varieties I am investigating. I then take notes from the experience of other members. This I recommend be your first step! Then proceed to learn how to achieve compatibility. Chances are you are going to find out that an interstem will be necessary to bridge the compatibility gap between rootstock and some of your varieties. 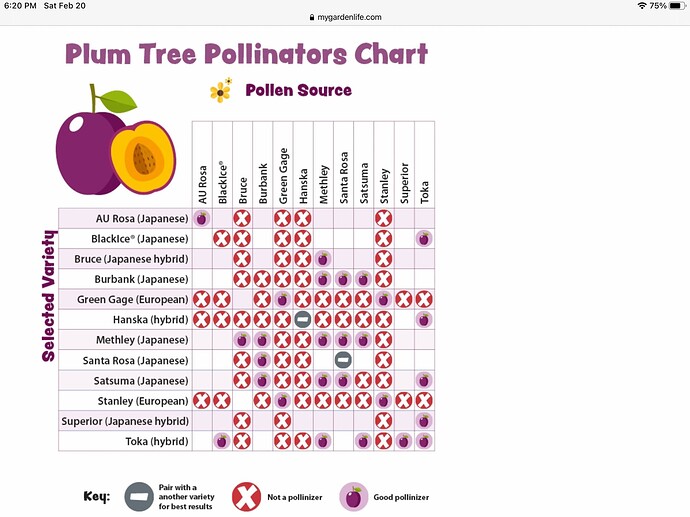 my end goal is way more plums - i have 3 plums in ground - maybe 30-40 possible grafting points i need more places to graft to … i just used apricot as an example since its a stone fruit. but i have peach, pluerry, pluot, almond apricot branches so im just wondering if i can buy/trade a plum scion and top work it to the end of an existing branch on the peach or pluerry or pluot or almond or the apricot with out using an interstem.

I thought the link is quite comprehensive. They use scientific names to avoid any confusion. All you need is to look up what the common names of those prunus.

Then you can compare which is compatible to what, and which not.
Not all stone fruit are compatible. Prunus avium is very picky, for instance.

Ur saying if I can graft plum and cherry to the same rootstock then I should be able to graft plum directly to a cherry branch?

No, I know of no cases where anyone has been able to graft any plum or peach or any other stonefruit variety other than another cherry variety to a cherry rootstock. I’m not sure who told you this, but, to this question I can say I tried for a number of years to graft plum and peach directly to a sweet cherry rootstock only to get 100% failures. There are only two rootstocks I know of that can accept all all types of plums pluots, and cherries as well. Those I mentioned in my prior message. A shortcut you can take to get a rootstock that will accept any stonefruit variety you want to graft onto it, even cherries is called a Puente, you can order this tree from Fowler Nursery. This nursery serves the California fruit industry fro commercial production. The Puente is nothing more that an Adara plum tree growing on a Lovell peach rootstock. It can accept and grow any stonefruit you can graft! So this is the quickest way I know of to obtain a multiple variety plum tree where you pick the varieties. You can speak wit Margarheit there to find out how growers use this Adara rootstock. I believe they use a peach root because of its growth potential over a stratight Adara root. I have three of their Puentes and this year provided Adara scions to friends in my area, as I cut limbs off to graft on plums.
Hope this clarifies, don’t waste your time trying to go without interstems that bridge compatibility for you.
Dennis

Ok to the inter stem - I can graft some of those this year but as far as scion to scion if compatible… is there a chart showing something is compatible?

The reference section @mamuang linked should answer all of your questions if you research long enough on each species you are interested in. Generally there should be a way to graft all stone fruit together via interstems. Also keep in mind grafting some stone fruit, even if compatible, is harder to get takes compared to other types of fruit. Peaches in particular people seem to have poor %s of takes.

I expect you may not need an interstem to graft directly to Pluery or Pluot since they are hybrids from plum, but I would not try grafting plum directly to the others. One thing you can do is to graft your interstems directly on the peach, almond or apricot limbs then graft your plums onto the interstem. This is a bit tricky because both cherry plum and Adara are very aggressive and quite often if you leave any interstem buds on the interstem itself, it’s quite possible and very likely that those interstem buds will overtake complete dominance and your plum scions may fade away, so if you go this route I recommend only a couple interstem buds remain and you need to clip them either out or tip prune them as soon as your plum scion breaks bud. Then once you are sure the plum scion has taken, keep pruning the interstem back enough to assure the plum scion is growing. Of course if you remove all interstem buds and your plum scion fails, then everything is lost! So leave only a couple of interstem buds on to support the interstem and provide new shoots in the event your plum scions fail! But do not allow the interstem buds to outgrow your plum. This method requires almost daily monitoring. Some plums like Flavor King can handle the competition with interstem buds, but most require you to keep them under control. The simple method that worked very well for me this year was to use only dormant interstems to graft my cherry one year old growths, then I came back in Late July to start summer grafting onto those interstems with as many green scions as I could find among many of last years plum pluot grafts. This method gives nearly 100% success because you can easily control the vigor of the interstems while getting the majority of the growing season to grow your new plums and summer grafting green wood is a snap!
Dennis

On second thought, I should refer you to Kevin Barron,@spokanepeach, I recall he claims that most if not all of his plums grow on peach rootstock. I never inquired how he grafted them, but if anyone knows about grafting plums directly to peach, I would bet he knows how to do it.
Take care, maybe Kevin will respond to give you a more experienced view
Dennis
Kent, wa

I have plums growing on peach. Currently Early Laxton, Yakima, and probably Emerald Drop pluot. I’ve had several other European plums on peach but the whole tree died.

Also Raintree sold me a three or four in one European plum on peach rootstock.

Did you graft them?

Not the Raintree multi-graft, of course, but yes, I did the others.

Yakima is on Frost, Early Laxton on Indian Free, and Emerald Drop on Charlotte. I also had Reine Claude de Bavay on Charlotte, but the graft broke in strong winds. It was an unsupported bark graft with significant growth.

Pretty sure you can mix and match anything but cherry. Euro plum doesn’t mix either.

On second thought, I should refer you to Kevin Barron,@spokanepeach, I recall he claims that most if not all of his plums grow on peach rootstock. I never inquired how he grafted them, but if anyone knows about grafting plums directly to peach, I would bet he knows how to do it.

That is correct. I have many varieties of Asian plum, European plum, and Pluot grafted to my peach trees. All types of plums have taken easily and vigorously to peach. My difficult task has been getting peach or nectarine to take to peach. My success rate with peach on peach has been much lower than for plum on peach. I use a grafting tool like the one below: 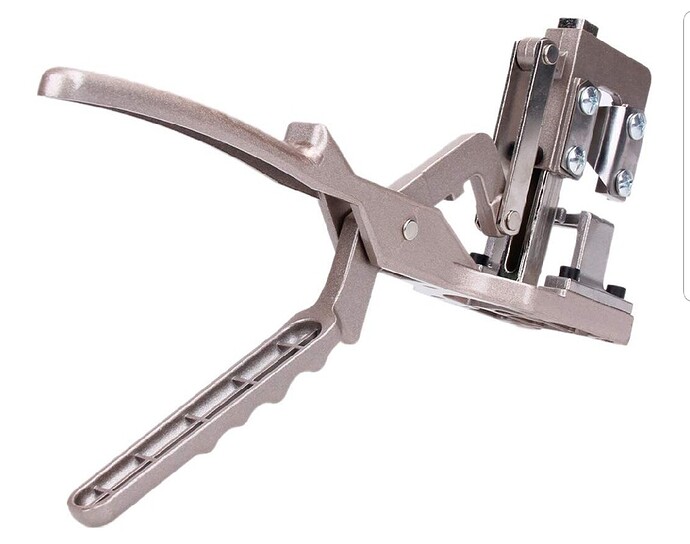 Also parafilm to wrap the scions and rubber splicing tape to hold the grafts together: 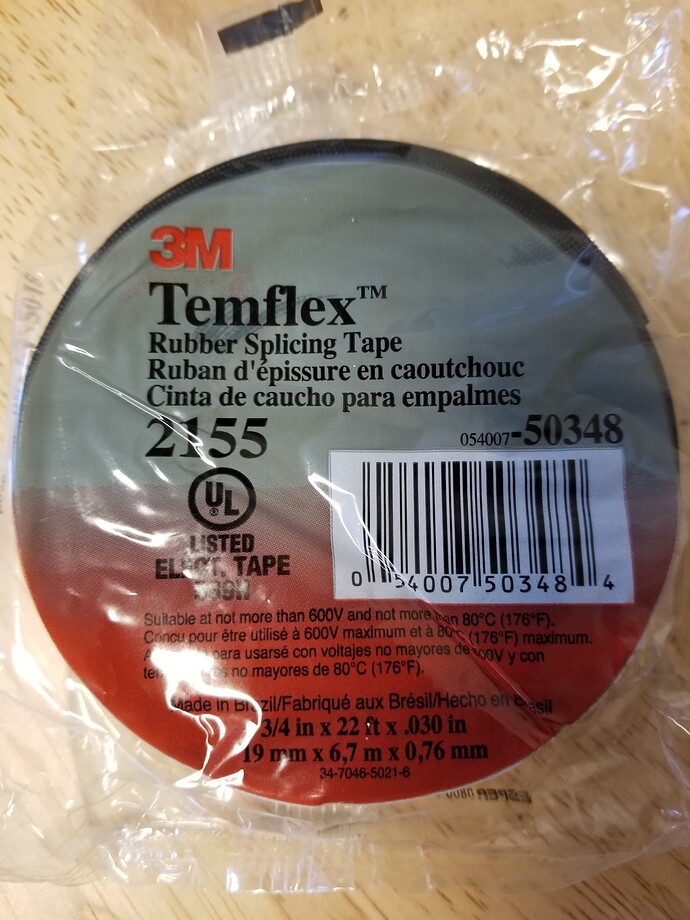 What else have you grafted plums on to?

Just peach. I love peaches, nectarines and apricots. I am experimenting with plums to see if there are any that I really like as much as peaches and nectarines. By grafting I can try a lot of varieties without the commitment of putting a tree in the ground that I might want to pull out later.