Had anyone tried eating their hostas or specifically growing them for food?

In Japan they are often eaten like asparagus, raw or cooked. You harvest the shoots as they emerge. Wild ones used to be commonly eaten, but they are often greenhouse grown today. From the info I have seen online Hosta montana is preferred. They have purple stamen instead of white or yellow, iirc.

Seems like an easy edible to grow in otherwise shaded areas…if I can keep the deer away! Maybe I will stick some under the trees with ostrich ferns for shady spring shoots.

Hi! Yes i already try some leaves on our juices… but they are so beautifull that i avoid to do it… i just love them!

I’ve eaten them a few times. You definetly need to get them before they start to unroll or else they won’t be tender. Taste is very mild, I just added them to a stirfry. I’ve heard that you can cut all the new shoots when they first emerge and plant will send up a second flush of leaves with no serious harm to the plant. I have just picked ~5 shoots off of each plant and later in the season you can’t even tell.

I sauteed some regular ones. The taste is not bad. I like to try Hosta Montana if I can find one

I am thinking ‘Montana’ is outdated nomenclature, I can’t really find anything about it aside from articles saying it’s edible. Another article says fortunei is the best species to eat.

We have lots of different hostas and I’ve tried them. I generally found them pleasant, but a bit dull. A generic “green” flavour.
If you were short on asparagus and needed to stretch it for something like a soup, they would be great for that.
Not much production for the space, or very exciting, but they are easy, decorative and fill in under the big trees.
The flowers are nice, crunchy and refreshing in salads.

I did indirectly grow hostas for food. I did it by potting up three dozen hostas last spring before the local deer ate them to the ground. I sold them on Facebook for $10 each. I sold them all in one afternoon, people went nuts for them! That buys a lot of groceries that taste better than hosta shoots

The leaves can be used basically as chard or spinach…and the shoots stir fried at an inch or so new growth.

like Jerusalem artichokes and kennebec groundnuts. i planted them and let them spread. someday i may need them. both look nice in the landscape.

How do you cook them? I have reached critical mass and the vines are damaging my trees with their weight.

my patch is only 2 years old so i haven’t tried eating any yet. maybe next fall. i found some websites that explain how to cook them but forgot their names. they grow just under the surface of the soil if you plant them under mulch. dont even have to dig just pull on the root and they come right up.

where did you get yours? mine came from oikios.

I have been growing hostas for food for years. Food for deer and rabbits, exclusively!

All my hostas died from repeated deer grazing. I’ll have the fence them if I try again!

I don’t eat them raw, but I enjoy them sauteed with nettles and seasonings. They maintain a nice thick firm-ish texture even after cooked. 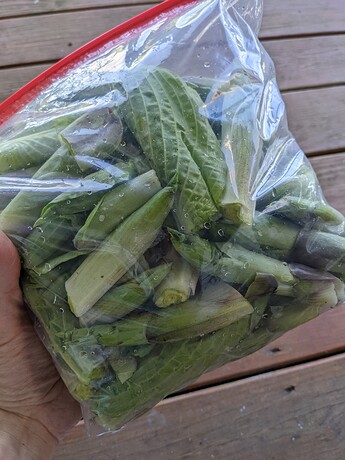 Not quite as tasty as asparagus or cabbage, but quite nice.

That’s a bit much of wishful thinking. I mean with your average person eating around 2k calories a day you would need an entire field of hostas just to make a dent on that.

To look at a realistic contribution to an emergency situation I like to break things down into calories and ease of preservation. In a lot of cases I don’t even need to eat it, but if I have a surplus I can trade it for somebody else’s surplus. And yet realistically speaking even with all the trees and bushes I have it doesn’t even hit the average 1,000,000 calories a year a single person need.

I’m fairly sure many folk manage to survive on half their current calories in event the stores are closed, empty, or the scanners don’t function.
Cannibalism is the other option.
Not that I am suggesting it…just that some may go there raather than forage for food, if things get tough.