Making pies for the Holiday?

I loved this woman’s work - she shows how to make beautiful pies and actually makes it look simple and fun: 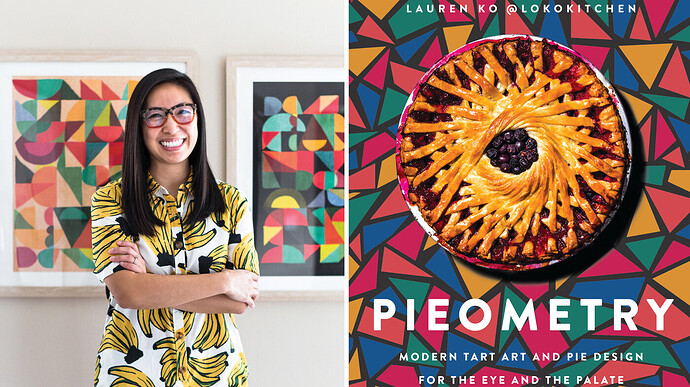 Want to make tastier, prettier pies? A baker tells us where to tart : Life Kit

And I also like to flog this pie crust recipe:

Best to make the pie dough early enough that you can let it rest a couple of hours before rolling it out, and also good to let the rolled-out crust relax in the pan before blind baking.

I do 50/50 butter/lard in my pie crust. 100% lard would might be even better but what I do works very well. After putting the rolled out dough in the pans and popping little holes in the crust with a fork I brush on milk and then refrigerate another half hour, give or take, before putting the filing in. I try to keep the crust cold before putting the pie into the oven.

Most of the pies I make are “pumpkin” pie using fully ripe home-grown butternut squash instead of sugar pumpkins or, God forbid, canned pumpkin.

…and as I type,there is a canned-pumpkin pie in the oven!
Perhaps I can be forgiven as I used a bit of star anise in the spices.

I was dubious about a recent pie shown in the weekly food section of the local newspaper: A bacon strip lattice crust. The bacon did not look at all crispy and would be hard to cut or to eat the slice like a more typical pie.

I’d skip the bacon too!

And while I’ll acknowledge the superiority of using pumpkins or squash instead of buying the can … I bought the can - and I use the recipe on the side.

It’s what you’re used to, I guess, and I got used to canned pumpkin when we made hundreds of them in the bakery every holiday. I did use butternut squash one year for ourselves and it was pretty good, but I didn’t strain the cooked squash and I wish I had.

A lot of people prefer the 50/50 mix, or even 100% lard, and it true that they make tender, flavorful crusts. But I’m a flake-freak, and I love the flavor of butter, so that’s my go to.

Georgia candy roaster for pies here. We just roast them, puree, and then you can follow the exact same recipe from the can and it comes out awesome! 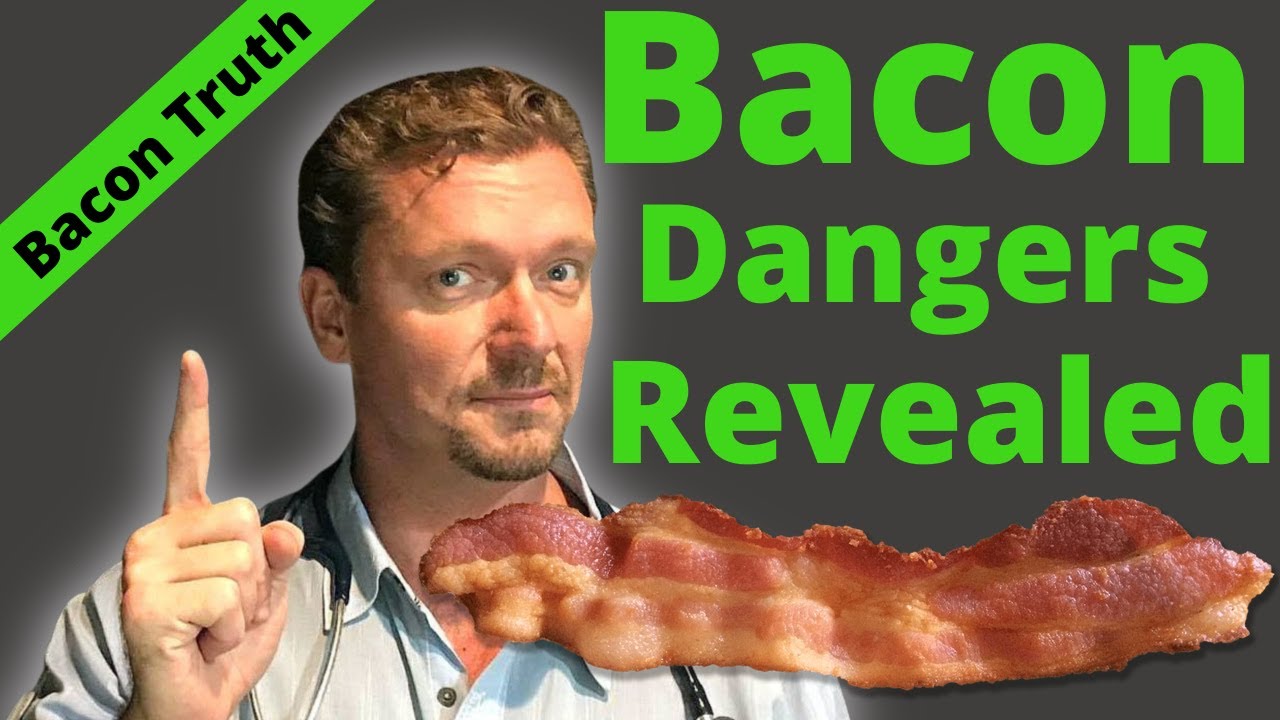 Lots of myths about bacon being bad for you… Carnivore Ken tells the truth about it.

I love Bacon… and Butter (real butter… and grass fed).
I often use other cooking oils for higher smoke point (like when blackening fish, or frying okra)…

A mix of Ghee and Bacon Fat… gets the smoke point up there some and the flavor too… if you like butter and bacon flavor. In a pie crust ? not sure, but in Fried Okra… mmmmm good.

So’s you know, I just meant skip it on the pie!

As a rule, I eat bacon. I just want it a bit on the crispy (not browned). Bacon has all three of my favorite food groups: Salt, Fat, and Smoke. 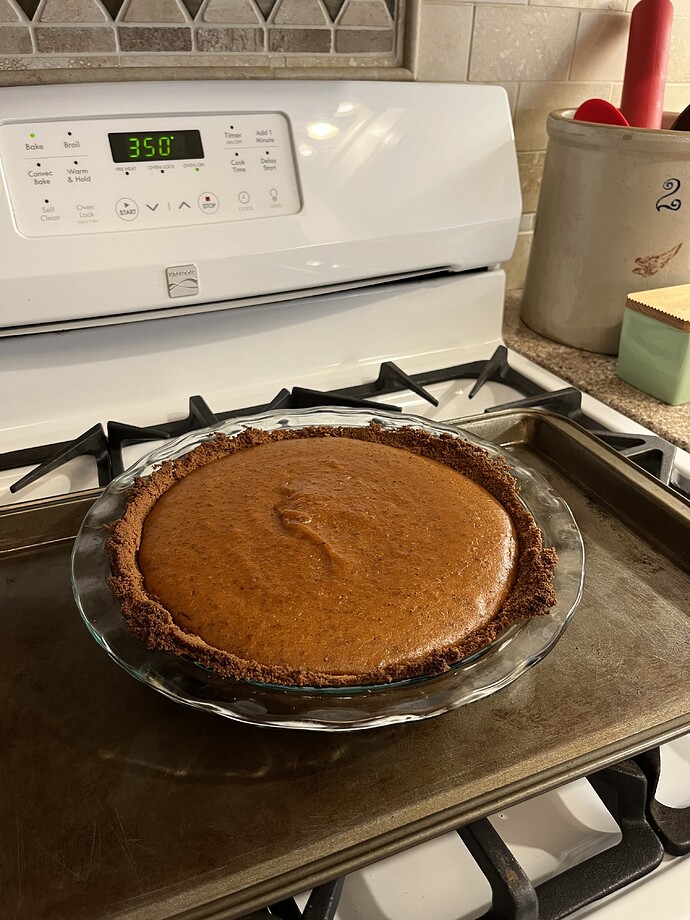 I like to make a “graham cracker”-like crust from ginger snap cookies for my “pumpkin” pies. I’m lazy and just buy packaged cookies from the store but maybe one day I’ll do the whole thing from scratch. We don’t have kids so I’m not in the habit of baking goodies all the time like my mom and grandma were! Lol

I grow “Bitterroot” buttercups and “Sonca” butternuts every year for roasting, pie, and ravioli. I’m always sad when I’ve used them all up. This year some got dropped during our move and spoiled early from the bruises, which means I won’t have enough to get us through Christmas like I usually do!

That’s beautiful! Thank you for showing it.

I’m interested in the “Bitterroot” buttercups. Here in western Montana (and I suppose other parts of the west) the bitterroot plant, lewisa rediviva, has great cultural and historical relevance. The Salish/Kootenai tribes, and I imagine many others, used the root as a major starch source. They gathered the roots late in the summer, roasted them in pits “low and slow” ; then they ground them into flour, if I’m remembering well. As is done with names, we have the Bitterroot River, Valley, and Mountains, and uncounted spinoffs. It’s usually spelled without the space, “Bitterroot”, sometimes with, “Bitter Root”, but should always have two r’s. When Lewis and Clark came through Lewis collected the roots and took them back when the expedition headed home. Months later the roots were planted and grew, hence the “rediviva”, or revived, part of the name.

They are lovely blooms. The blossom and the leaves always appear separately. Sometimes you will come across meadows and suddenly realize that all around you are these delightful little flowers - makes you careful where you step!

Bitterroot (Lewisia rediviva) is a small perennial herb in the family Montiaceae. Its specific epithet rediviva ("revived, reborn") refers to its ability to regenerate from dry and seemingly dead roots. The genus Lewisia was moved in 2009 from the purslane family (Portulacaceae) with adoption of the APG III system, which established the family Montiaceae. The plant is native to western North America from low to moderate elevations on grassland, open bushland, forest in dry rocky or gravelly s...

@marknmt Thanks for sharing! The variety is indeed named for the Bitterroot Valley in Montana. I acquired the seeds from Uprising Seeds based in OR. They produced beautifully in our droughty weather this year, so I think it must be well selected for the local climate – in fact, it’s the happiest I’ve seen the vines in all the years I’ve grown it, lol. In the past I’ve considered growing a different variety that might handle the wet summers better, but I do like how these taste.

The bitterroot plant reminds me a little of bloodroot. 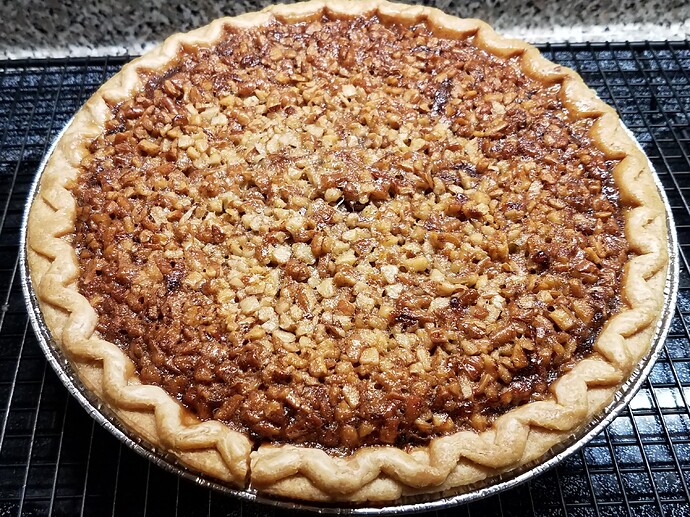 My wife made a pecan pie this afternoon.
Family Thanksgiving dinner at our house tomorrow.

I just got done making some pies using long Island cheese pumpkin/squash. These are great ornamental squash around Halloween then become great pumpkin pies around Thanksgiving. 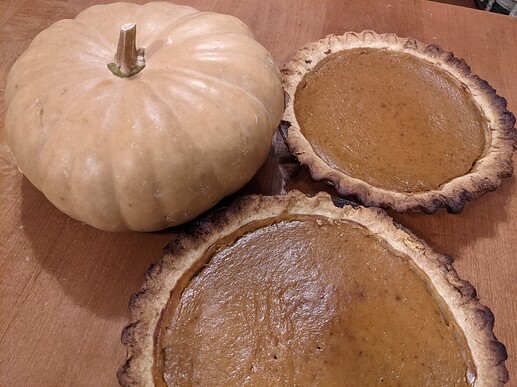 I am getting hungry for pumpkin and pecan pies now. PLEASE share the recipes of these delicious looking pies. If you do not mind. If you do not want to I completely understand.

I usually make pie for Thanksgiving. Raspberry is my favorite, with an all butter double crust.

This apple pie was from last October: 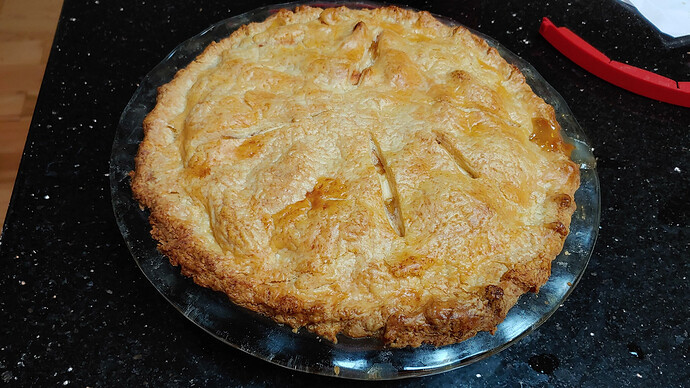 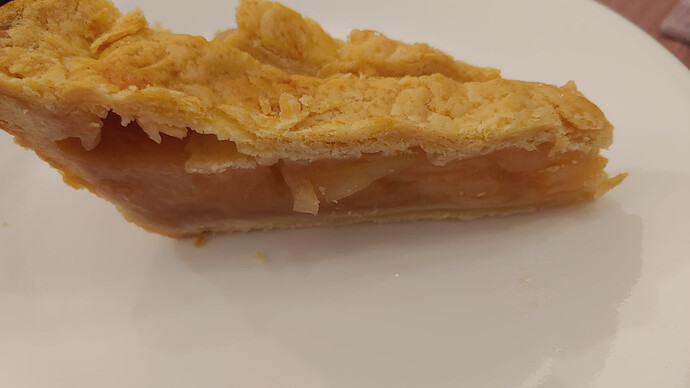 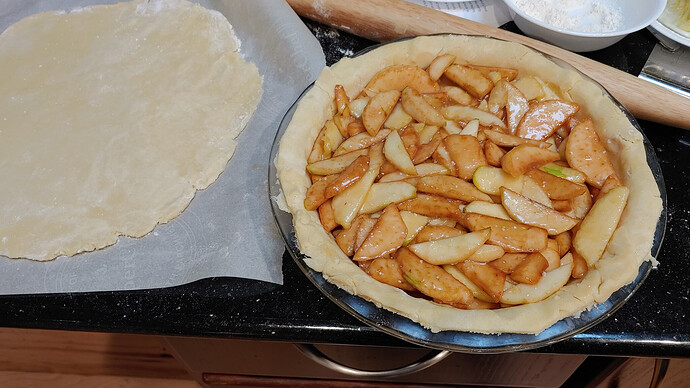 I saw that book and I definitely need to check it out. My pie duties today are limited to blind baking a crust for the cranberry tart my wife wants to make. About to go in the oven! 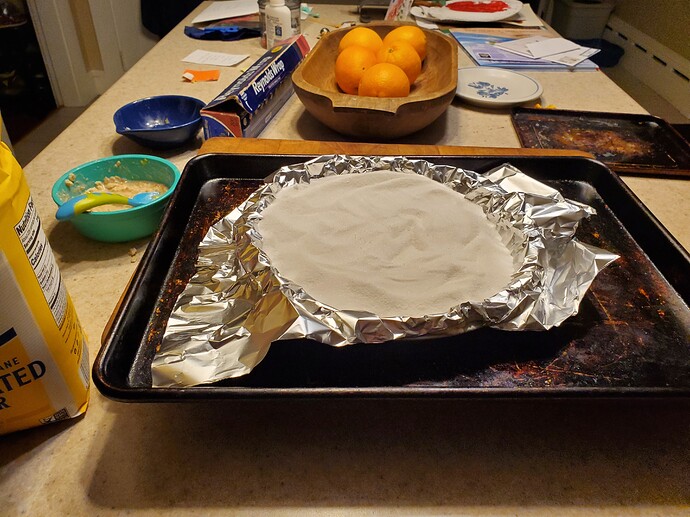 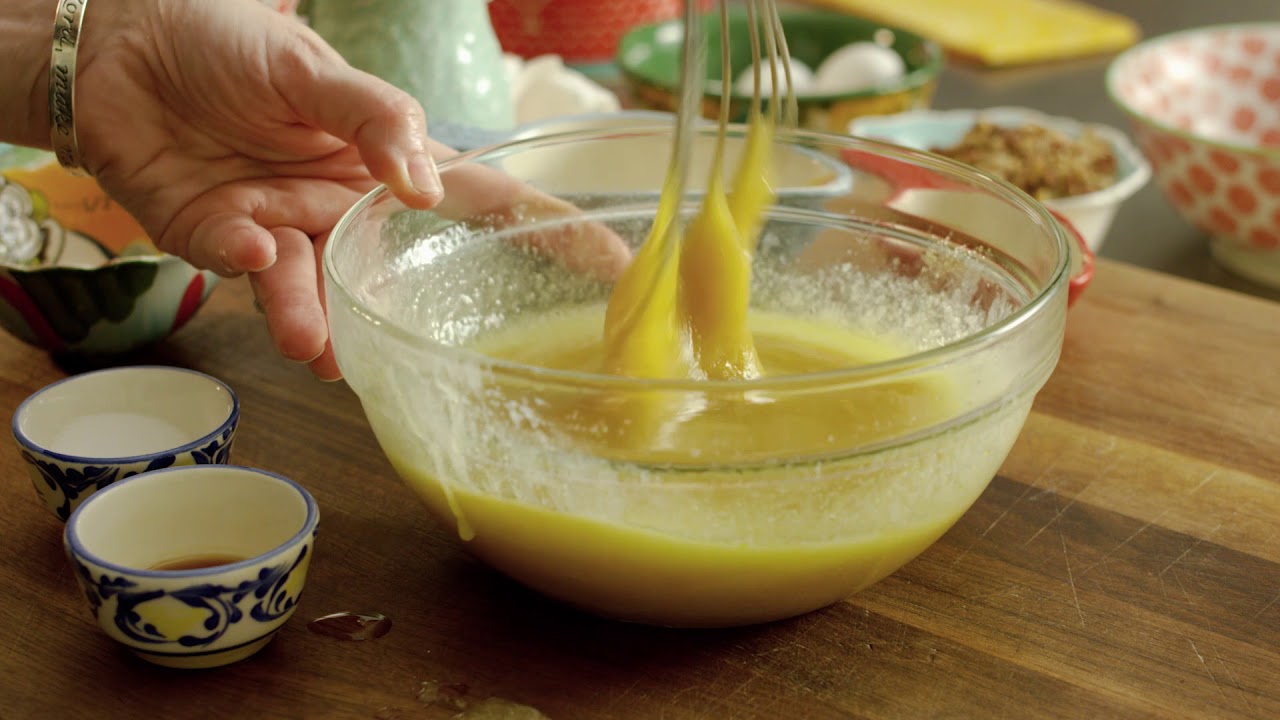 My wife has been making pecan pie for 30 years +… but 7 or 8 years ago started using the pioneer woman recipe… and it is fabulous.
Simple… yet very very Good.

Got the turkey out of the fridge at 530 am. to let it move a little closer to room temp… 1.5 hours later… seasoned and buttered it good (Gordon Ramsey style see vid below)… in the oven at 730…

3.2 hour cook time… we are eating at noon here today. 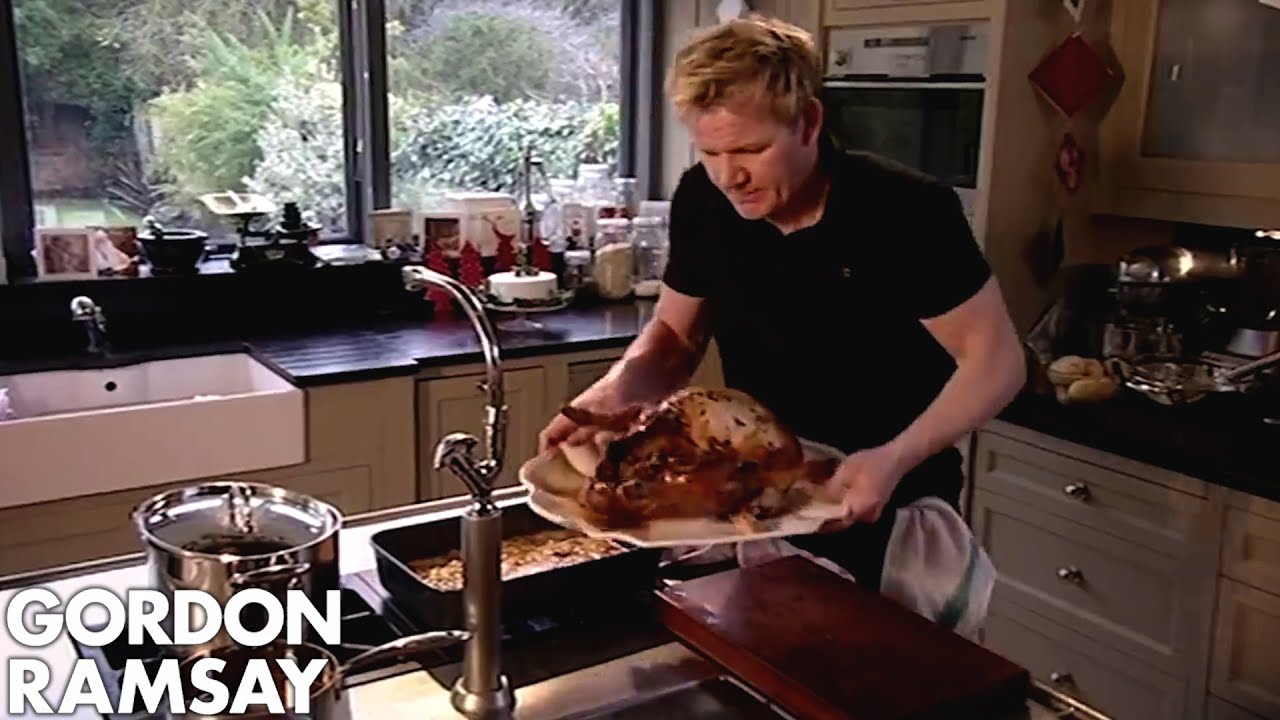 I envy those of you who make good pie crust! Me? After trying it a few times and pie crust turned out to be short bread texture , I gave up!

For Thanksgiving, I always make pumpkin chiffon pie. Much lighter than the traditional pumpkin pie. Ignore the store bought pie crust, the filling is pretty good, light and fluffy 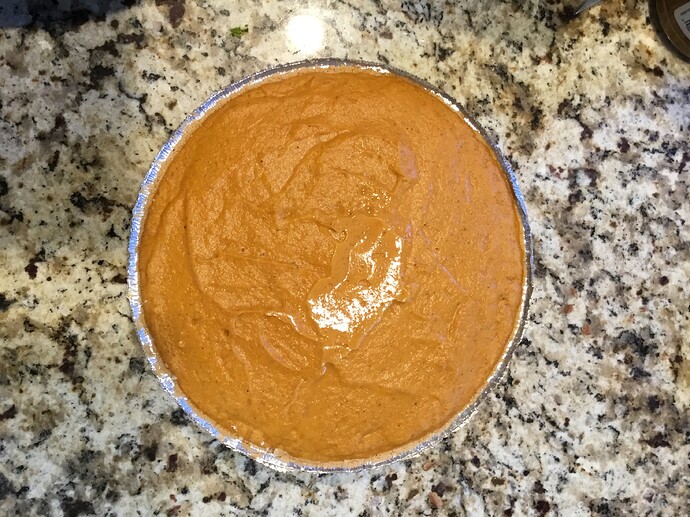 Well, there’s an awful lot of good information on pie crusts in this thread. And the link I gave in the first post includes excellent step by step instructions.That’s if you care to try again, of course.

Best pie at our gathering today: mom made cherry pie from our pie cherry tree! Yum!!!