Hoping to get into some nitty gritty details on peach borers here please. We have them, that much is clear. I have a pheromone trap catching a few and this spring i spent a ling time clearing frass and proding holes with wire. For all of the frass we found only 5 borers among 3 trees. I sprayed with dormant oil, cleared the frass and sprinkled nematodes.
Two weeks ago i bought 100% neem oil and dilluted it 1:1 with water and a drop or two of dish soap and sprayed up to the bottom of the first branch on each tree.This week i see more frass and some just clear ooze (i assume the clear is old injury) no amount of poking produces a grub. Today i noticed the remnants of a chrysalis or whatever it is that they make.

Questions:
How to apply the neem? Concentration, technique, frequency and height up tree - what is the best way to do this?
What direction do the borers typically go and how far? Is it typical to not get anything dug out?
What else can be done to prevent the loss of these trees?
When examining the bottom of the tree, how far down would you dig away dirt/cover?
Is there any way to know/guess if i need more very expensive nematodes or if they are helping?

It sounds like you wish to stay organic. Peach borer activity can start several inches below ground level with the main damage usually being done in the first two inches below ground level but can run up to scaffold branches. There is also a lesser peach borer that attacks branches so basically the entire tree is at risk of attack. The nematodes are supposed to be effective if applied spring and fall and neem really depends on a treatment at egg lay to kill eggs and worms before they penetrate the bark. Timing seems pretty critical.

What are my non organic options? Everything i find is geared organic but i do not want to lose these trees that have just reached mature size

How exactly did you ‘sprinkle’ the nematodes? The nematodes I have used are mixed with water and you thoroughly spray the base of the tree and area around it. Then give it a soaking with more water, the idea is they will get down in the soil and crevices at the base of the tree. I have tried using them to control the peach borers attacking my peach, nectarine, plum and apricot trees this last fall and spring, but haven’t really noticed it having an effect yet. I inherited the trees when I bought my house 3 years ago and the borer activity has gotten progressively worse, other than one tree outside the main orchard which was pretty much killed by them from the start.

Every fall, dig down around the base of the tree and bury moth balls that have pdcb as active ingredient. These are basically all mothballs that do not contain napthalene. These will gas off over winter and kill borers in the soil and bottom few inches. Around the first of May, or now if it hasn’t been done earlier, put one ounce of neonicatinamide insectiside in a gallon or two of water and drench all sides of the trunk, allowing excess to go into ground around the trunk.
This wont undo damage but should prevent any future damage if done yearly. I fear it will also harm your nematodes however.

moth balls that have pdcb as active ingredient

Read this among other harmful effect of PDCB, I would not put it anywhere where you are producing food crops!

Mothballs in the Garden: Bad Idea

While the fumes from mothballs may keep some animals from munching on your gardenplants, they are not intended for this type of usage. Using them in the garden or anywhere else outdoors is not a good idea, as these products could be harmful to pets, young children or wild animals that find the mothballs.

Both naphthalene and PDB mothballs placed around plants leech chemicals into the soil and potentially the groundwater, as rains wash some of the chemicals into storm sewers, wells and waterways. Plants also absorb these pesticides, so if you are growing a vegetable garden, placing mothballs around your crops means that your produce most likely contains these potentially toxic chemicals. Naphthalene is toxic to some oysters, fish and other aquatic creatures. PDB is also toxic to some aquatic life.

The Utah TRAPS phone app has alerts based on degree models by pest for weather stations near you, including outside of Utah, that I find useful.

I was told napthalene is worthless for this purpose. The recommendation for pdcb was given to me directly in response to this question from the Texas Ag Extension fruit and nut specialist, now retired.
If you chose not to use it, he will probably be O.K. with that.

Spinosad you have do 2oz per gallon in a five gallon bucket drench anywhere you think borers are on the trunk and drench the base of each tree. Once peaches are damaged after all this water in this heat those holes will juice a bit until they are healed.

Nematodes should be applied in a sprayer that has never had pesticides in it. You can dust them just harder to spread them evenly that way then you want them watered in well and not exposed to UV. Nematodes are a long term solution and most people don’t use enough. However buying the right kinda a few eventually multiply and help provide natural control to pests in the soil and seem to help increase earthworm and other beneficial insect populations.

I was advised by an uncle, who is nearing 80 and has been growing fruit trees since the 1970’s, to put plenty of wood ash around the base of peach trees. He said he battled borers until an older gentleman told him about this. For the past few decades he says he’s had zero issue with them.

My oldest peach tree is in it’s 4th year and the base is ~3" in diameter. I’ve had about an inch deep and from the base out to about 1’ radius, covered in wood ash the entire time. Have yet to see a borer or have to deal with one. Perhaps I wouldn’t have even without doing this, but wood ash is plentiful for me and I need to dispose of it some way anyhow, so why not. I try to stay somewhat “organic” so these trees get sprayed with a little Neem and sometimes Spinosad if necessary. Nothing like the “paint it on undiluted” strategy I’ve seen mentioned in the past. Maybe that is why I see no borers, or maybe it’s just the trees age?

Just in case it helps I’ve put it around apple and cherry and plum trees too. Again, I’ve got a lot of it, we heat our home with an outdoor wood stove. The soil here is slightly acidic so the alkaline effect of the ash probably doesn’t hurt either.

I did some googling on this and didn’t find anything specifically mentioning peach borers, but there are some scientific studies about it’s effectiveness with various weevils and other pests.

It’s been a few years so I probably need to refresh it around this tree: 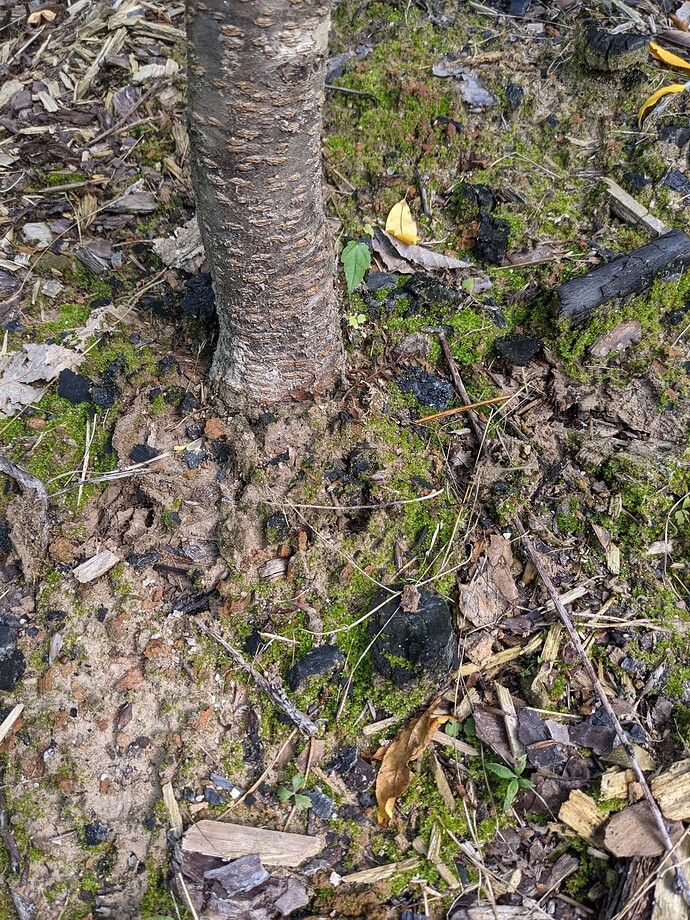 I shouldnt have said “sprinkled” for the nematodes, i soaked them per the instructions and then applied the liquid.

I will not be using mothballs and absolutely never neonicatinamide. Im not about to apply chemicals that are a likely culprit in the demise of bees and would encourage everyone to avoid that chemical group and anything treated with it.

I assume spinosad will kill all insects where applied, no? This isnt ideal, but i dont want to lose these trees forever. How far around the tree should it go (as in radius around the trunk)? Is it safe to use once peaches are on the tree or should it be saved for post harvest application?

Look under the heading -Peaches, Plums, Apricots, Cherries
Scott described how he does it in details.

When the weather first starts to warm, I dig down with my fingers for slime and I crush the larva to death multiple times till the borer season is over. I have not lost a peach tree yet.

Spinosad only kills bees sprayed directly or the open flower sprayed directly, because of its smell its assumed bees would likely leave spinosad sprayed flowers alone until it wears off as the smell is the dead bacteria in the product.

It will not be systemic and does not go into the tree like neonectinoids and is only effective where you spray it. When i say douse it into the trunk i mean douse and i try to cover a good 4 x 4 with the drench but apply most of it directly down the roots.

The bacteria also does not reproduce and this is a good thing really but does not give it much lasting power passed a few days. I did paint the trunks of my trees with the 50/50 neem scott reccomended and the only place i seem to get borers is high up in my branches. Usually i just trim those out as im trying to control size anyways.

Its interesting about the wood ashes i wonder if sometimes peoples trees are just deficient in minerals?

Google is your friend.

Honey bee colony declines are a major threat worldwide. Among the lineup of possible causes — including parasites, disease, climate stress, and malnutrition — many have pointed the finger squarely […]

There is currently a great deal of concern about population declines in pollinating insects. Many potential threats have been identified which may adversely affect the behaviour and health of both honey bees and bumble bees: these include pesticide...

My recommendation is to not dilute the neem and to paint it on, don’t spray it. Cover the bottom six inches of trunk to the soil and let plenty drip down the tree into the ground. I had a borer nightmare and neem treatments ended it completely. It needs to be done once a year in June or so, that is when the eggs are laid and the worms are vulnerable. I currently use a mix of neem, linseed, and sesame oils so it is a bit cheaper (neem is expensive).

I don’t think spinosad will do anything, it is only active for about a week. The neem will last all summer.