Where can we get Super Rosseyanka scionwood? I live in Europe.

Great question for the group: Persimmon World on Facebook.

You’ll probably have wood being offered within a day.

Thanks. Any info on this variety? I’ve searched before on Google, but nothing specific.

Not really. It’s a sport. It’s I believe 1 or it is 2 weeks earlier than Rosseyanka. Fruit being very similar or the same as Rossey. 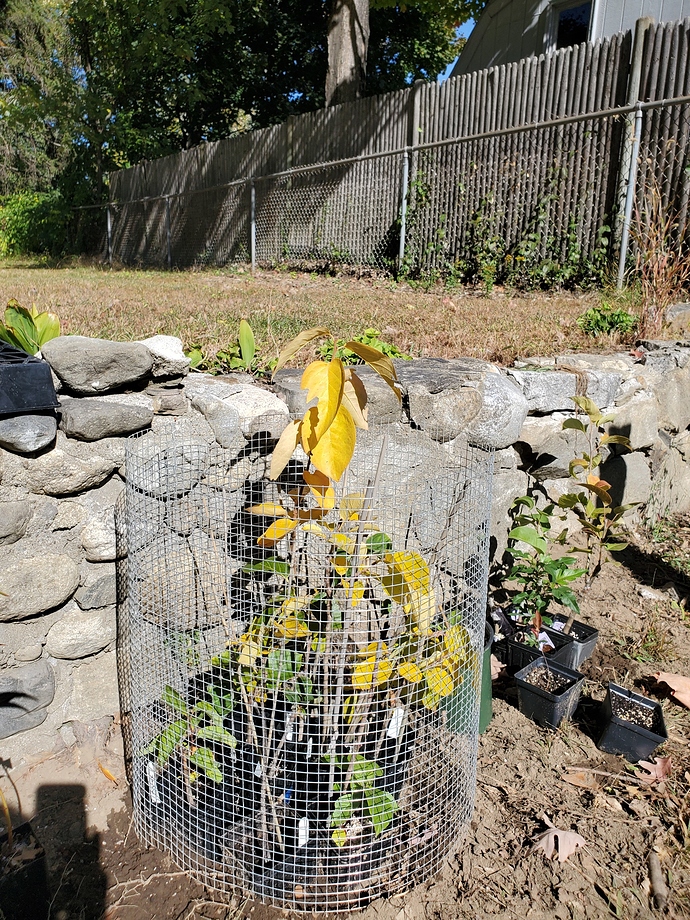 JT-02 settling in to more yellow than orange.

This was a weird year in so many ways. My persimmons may not be so colorful this year. Usually my Yates persimmon ripens in November. These were on the ground - quite early. Fortunately the tree is fenced. They may not be beautiful, but they have that spiced-apricot-drenched-in-wildflower-honey persimmon flavor. My Nikita’s Gift is a bit behind, Saijo has a few that are still hard, and Prairie Star has persimmons for the first time, but they are small, nickel size. 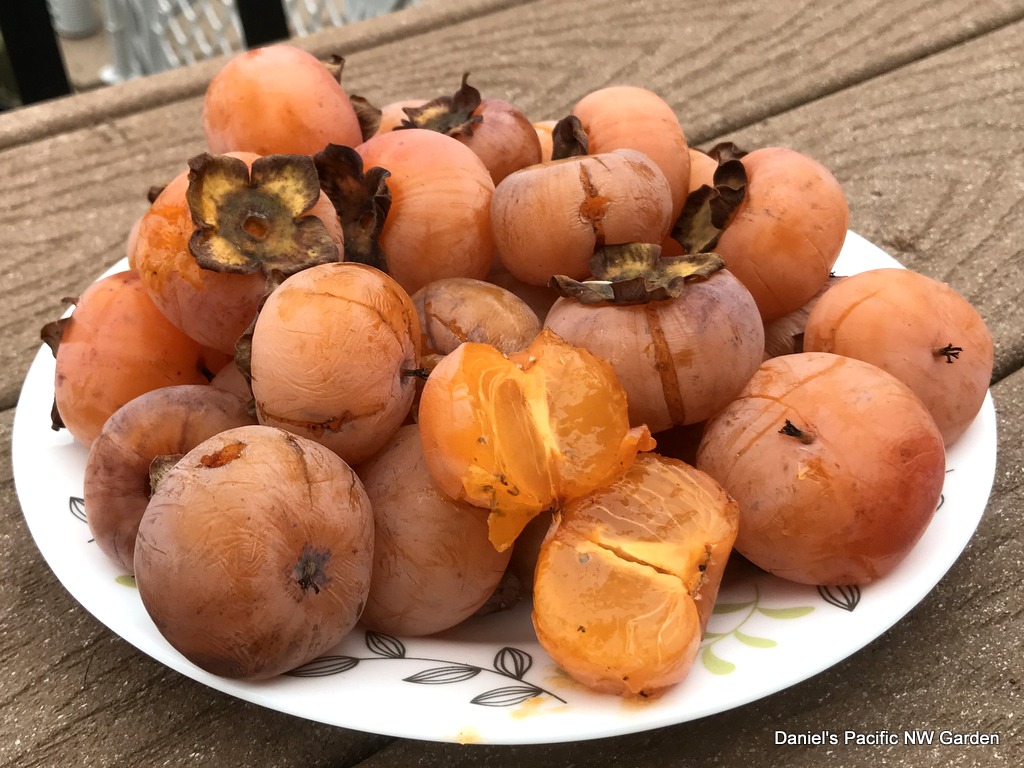 Thank you for contributing to the big picture.

Here’s some information about One Green World’s persimmons that came from a gentleman in Nebraska that knows my great friend, Gary Fernald:

CROSS-REFERENCES
I heard from Clifford England, and he knows the OGW to Claypool cross-references.
He confirmed Claypool H118 is OGW “Prairie Star”.

OGW “Prairie Sun” is indeed Claypool A33, which Clifford says is very good at Lehman’s orchard, but not yet proven at his.
You will recall Lehman identified A33 as the FIRST good persimmon to ripen during the “fruitnut” interview you posted on growing fruit. org

The other 2 OGW varieties are Prairie Dawn = Claypool H55A and Prairie Gem = Claypool F25, but please forget these since Clifford says they have little merit. (sorry OGW but truth will be truth, always) - I’m also very disappointed in you for not keeping the original Claypool names. It’s rather confusing what’s you’ve done, isn’t it??)

So when Jerry told me to buy OGW Prairie Star = Claypool H63A, he was thinking of the best OGW persimmmon for me, but mistakenly typed H63A instead of H118.

Daniel, my Prairie star range in size this year, but the larger ones are about golf ball volume. Shorter and wider.

Most are still opaque orange, but some have dropped and or become translucent. The early ones weren’t 100% astringency free, or they tasted great, but left a little bit of grit or something behind on my molars that was unpleasantly bitter. I’m hoping when the main group ripens they will have the good qualities without the bad

This is the best crop on these so far. The wind storm last month beat up the tree, it lost maybe 70% of its leaves and bruised some of the otherwise unblemished fruits.

From a week or so ago, then earlier: 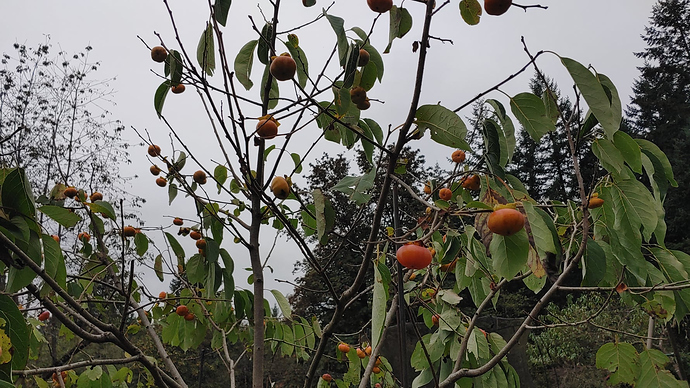 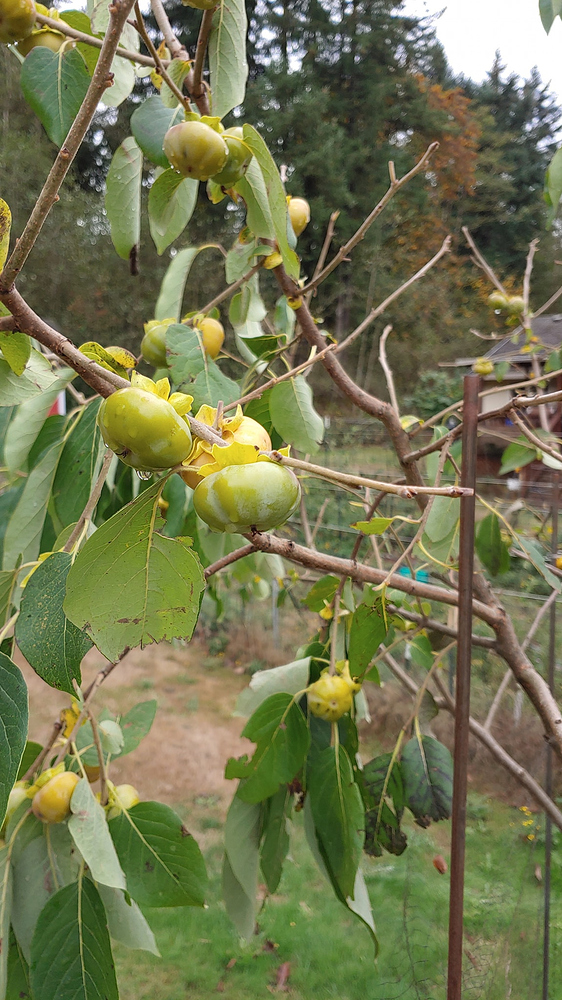 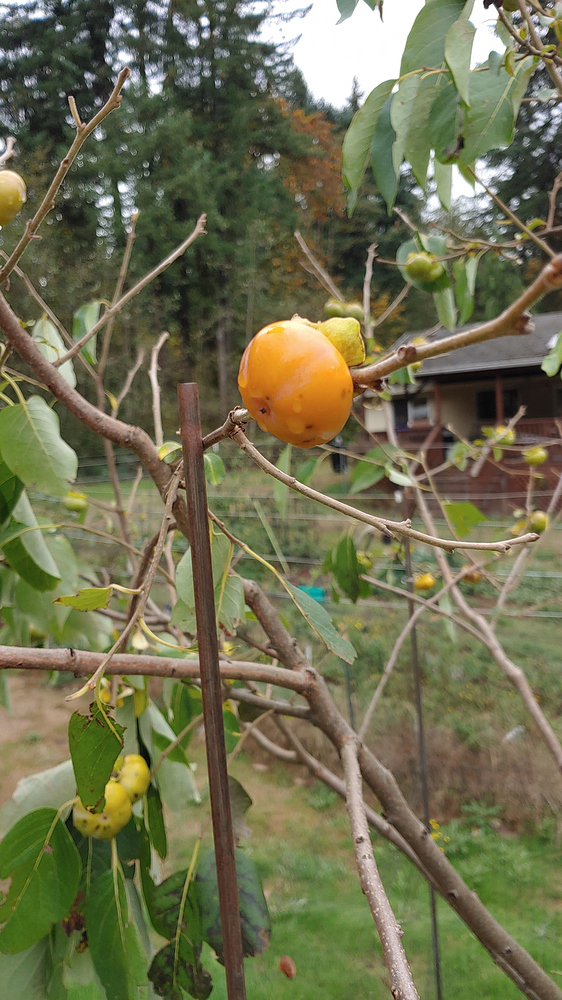 Thank you for documenting trademark names for the Claypool persimmons here one place.

I agree, better transparency is warranted. We shouldn’t have to guess which cultivars are the same. But I also understand wanting to sell trees with a more compelling name than a number designation. And at least they gave them a common moniker “Prairie” to indicate their common origin.

The Claypool name should be prominently listed in the cultivar description. Then I’m okay with the multiple names.

As with Cripp’s Pink and Pink Lady. At least there’s a connection.

It’s a pretty deep discussion murky-man. A lot more to it. A giant clusterf*k is a great description of what they did.

You don’t know if Claypool ever wanted anyone to make money off of his life’s work or not; maybe you do know. He isn’t alive, I know that. I complete disagree with the entire strategy.

Photos of fruit, description of tree shape, growth rate, hardiness, the first name given to it or a second name given from the person who bred it and that’s it.

I like ya man, but it’ a deep conversation. Not to mention the # of people who already had an H118 and bought one of the Prairie Stars. Now they have two of something. What if they don’t know how to graft and are sorta mad about it now that they’ve come across our information, now/whenever that may be in the future because those idiots at OGW just haddddddta make a big deal out of something that may have made them more money (who knows) had they made new names. I don’t know Claypool A333 sounds pretty rad to me. How’s about you?

I had to go there, Jafar. I’m not happy about this.

I didn’t mean to suggest that I like having the extra names, just trying to look at it from both angles.

And I’m coming from zero inside information or context regarding Claypool’s breeding efforts or desires, which I greatly admire from what little I know about them.

Don’t get me started about photos in nursery web catalogues. The way they cavalierly put some arbitrary picture next to a given cultivar is grossly irresponsible if not downright unethical. Unfortunately even a number of respected nurseries seem to practice “any picture will do” philosophy.

They could at least have the decency of indicating when they are using a stock photo. I often find myself shopping with my eyes, looking for fine distinctions between fruits, only to discover the same picture for another cultivar

Back to the multiple names thing. I wish there were more decoders widely available, like what you’ve done for us here with the Claypool persimmons. Some of the big boys, like Starks, like to use their trademarks for common varieties.

Then there’s Henry and David’s with their $10 pears that they call “Royal Riviera” which we all know as Comice.

I agree with everything you said. And, enjoyed it. 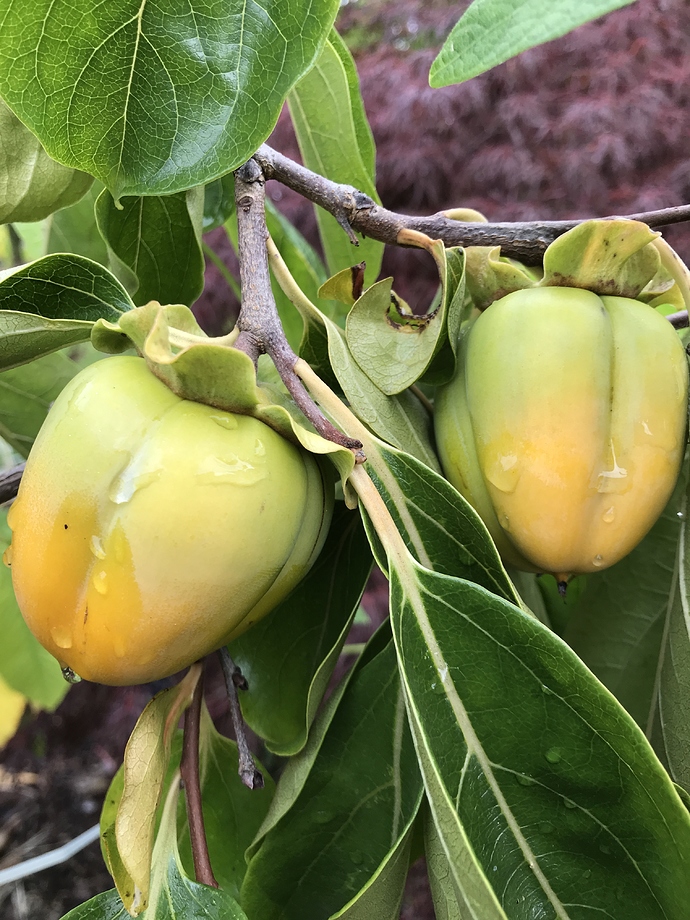 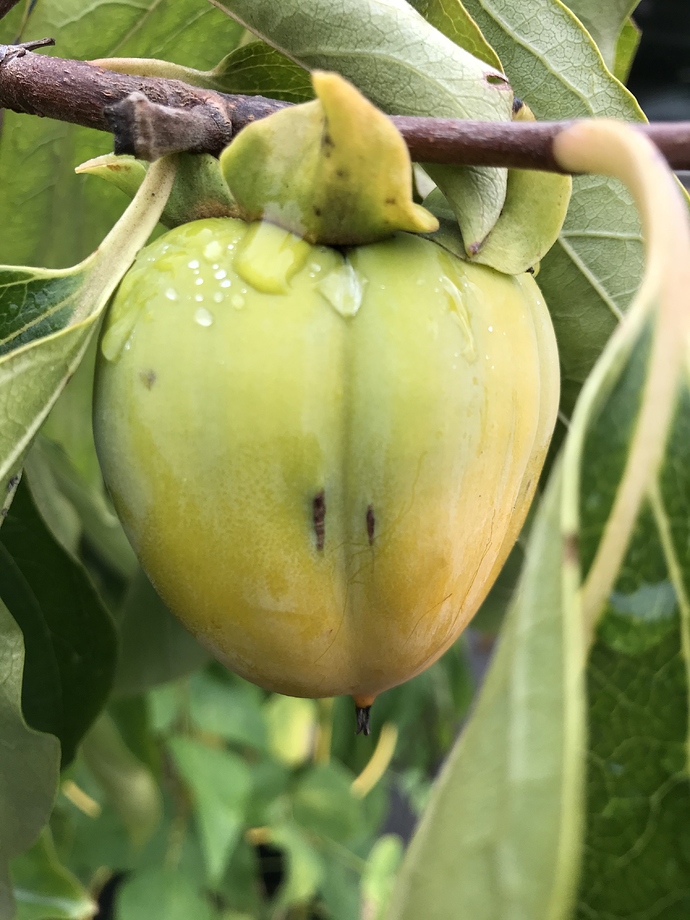 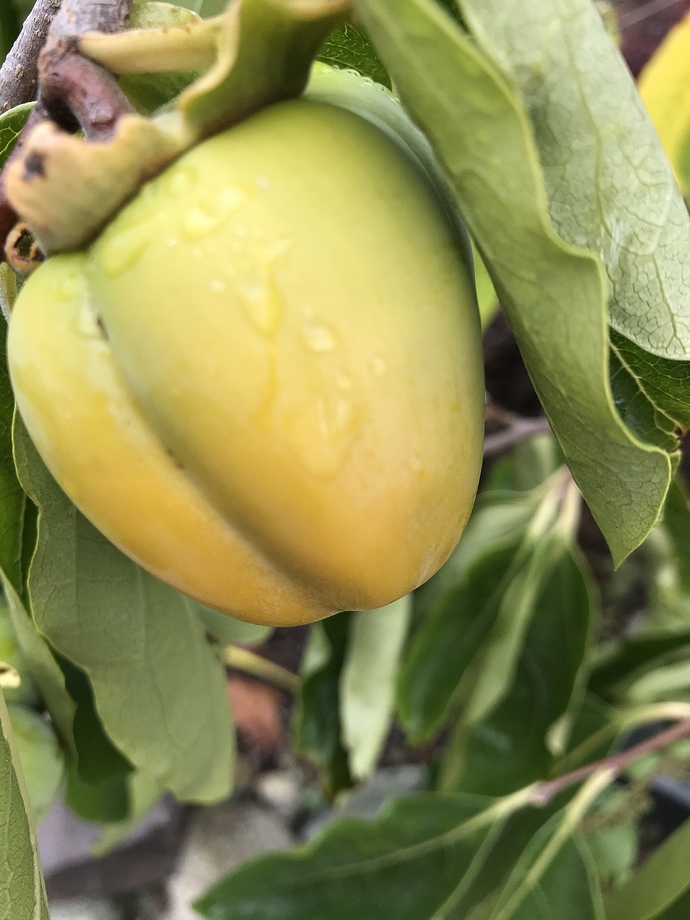 Last pic I got of the ruby persimmon before the dirt hurricane blew away the leaves last night. So, one day of the best color. Leaves were getting a bit of orange with the sun fading behind the smoke clouds. It’s on a multigraft tree with deer magnet in the background to the left (I snipped off leaves to hopefully encourage some hardening off), and Prok to the right. This was a good fall for leaf color here. 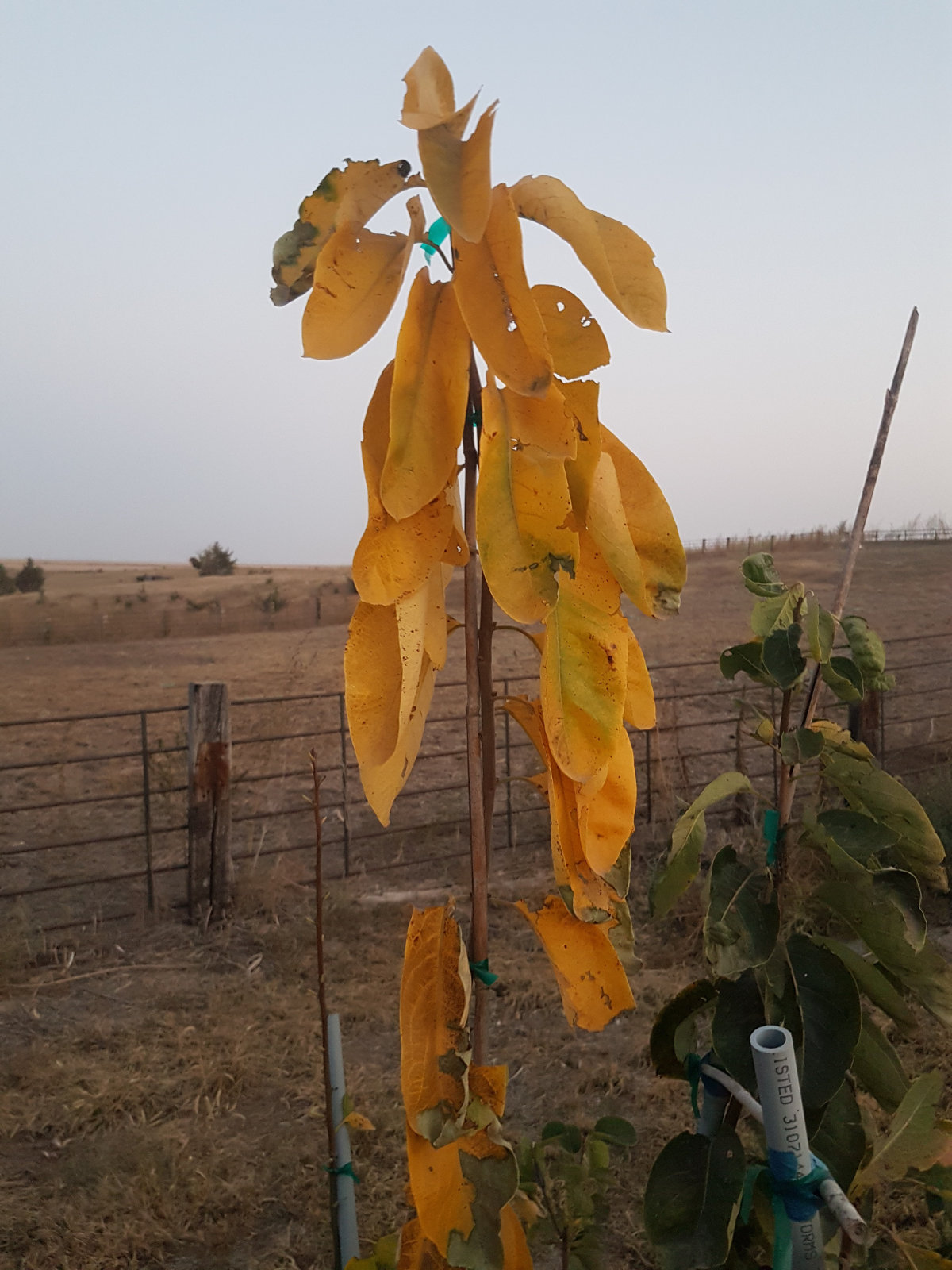 Speaking of named varieties…do you know anything about Korp. Can’t seem to find much on it other than it’s prok spelled backwards. Think I got the scion from fruitwood nursery…I think. 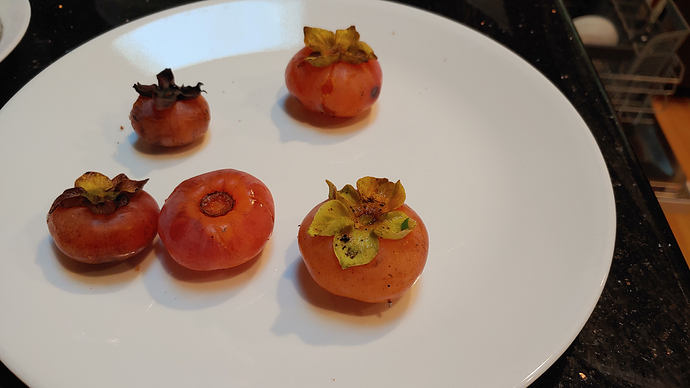 Did cutting off the leaves appear to work? I have a couple trees that still have some green in their branches. Not sure if I should try to speed up hardening since frost should come in a few weeks.

After I cut off the leaves…after a few days, the leaf stems have loosened up and many just fall off when touched. So, I think it will help. We’ve had some very light frosts, but nothing hard. At least not hard enough that deer magnet understood. 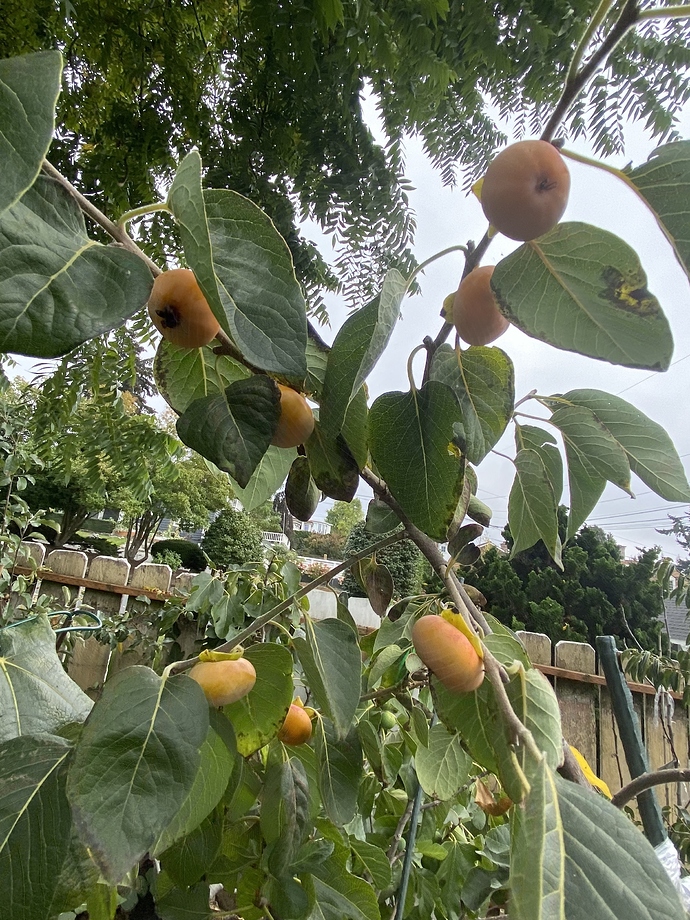 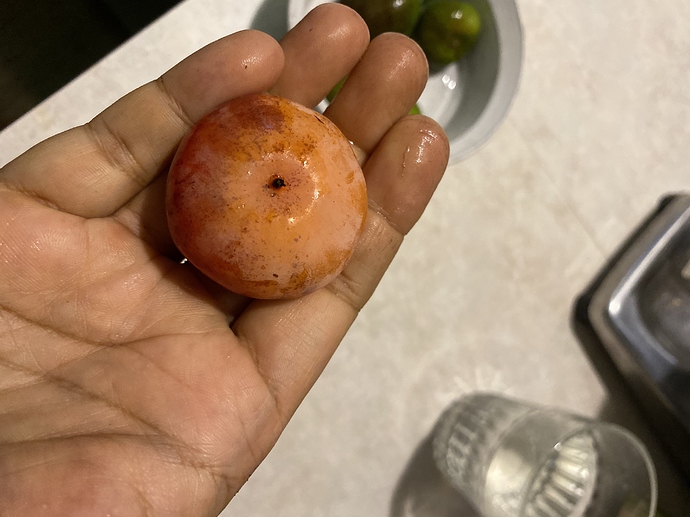 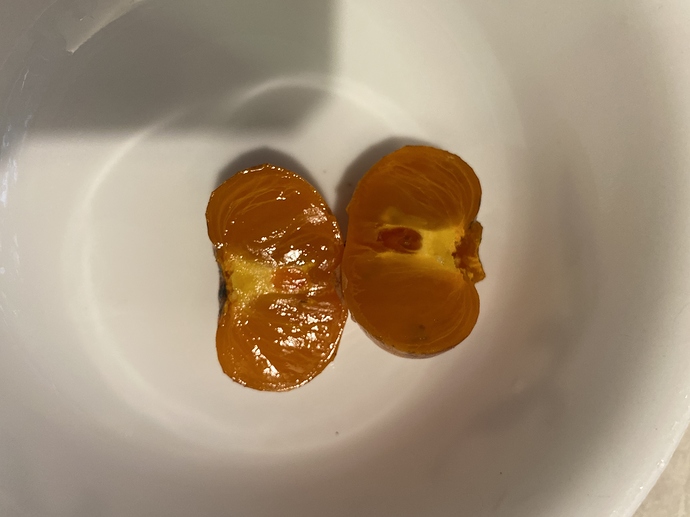