Anyone have any practical experience rooting persimmons, either American or Asian, via any form of twig cuttings or air layering? What type and how did you do it? Do air layers work well for any of you?

Last spring I started doing this. Nikitas Gift cuttings started leafing out and I was thrilled thinking I had successfully rooted the cuttings. Everything died within two months and I realized it was leafing out without roots. It doesn’t seem to be easy.

From what I’ve researched, the only way to do it reliably is via etiolation. And even then, the success rate will vary widely by cultivar. I have plans to try it out eventually, but I’ve summarized my findings in this thread:

Has anyone tried etiolation methods of rooting hard-to-root species, such as persimmon, apple, peach? I first came across the basic method while reading through Garner’s The Grafter’s Handbook and was intrigued. Garner describes basically leaning over the stock plant, pinning it to the ground, and burying it. You then repeatedly cover the shoots that emerge from the buried buds (similar to stooling rootstocks) to promote a blanched, leggy growth that is more likely to root. I found this more up-…

Could a person do a root graft

Never done this myself but it does seem like a logical way to go about it. Of course you would have to have something with roots already and something that was compatible.

Just throwing this in here…I wanted to grow the D. lotus rootstock of my D. kaki trees, so I made a bunch of dormant stem cuttings of suckering growth and stuck them a pot of soil. Of about 20 stems, 1 rooted and is still growing well. I will transplant it this spring.

That’s another option that I think has potential. I think using a small piece of nurse root grafted pointed up could work well. The Grafter’s Handbook mentions this technique. You graft it in upside down so you can easily find and remove it when the cutting has taken.

@Monardella, everything I’ve read stresses the need to get the wood in a more juvenile state. After etiolation, the other technique that has some success is root suckers, which have some more juvenility to them.

Has anyone looked further into propagation methods for this? I am planning to take the cut dormant pieces of my rootstocks I grafted this year and try to use root hormone and get them growing in a humidity dome, alongside some persimmon seeds I was gifted this year.

@Monardella how is your cutting looking, still alive? I figured even if I get a few out of 50 to take it will be a fun experiment and I have nothing to lose by trying it out.

My persimmon rootstock tips rooted well last spring, but then died when we had a nasty drought later that summer. From what I’ve read in the literature, the reasons persimmons are so hard to root is that they have a hard time reverting to a juvenile state. So young seedlings are much more likely to root than a known variety.

Mine are ~18" seedlings, so we’ll see if I can double my order and graft 100 total trees 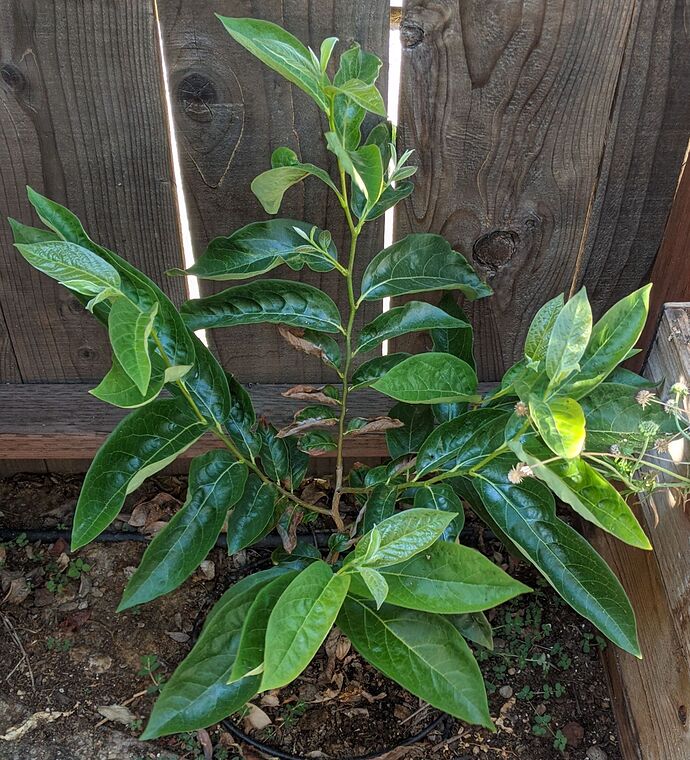 Thanks for the update! My question was more about a “can it be done” and that little guy definitely shows that it can. Commence operation order doubling.

Good luck! I hope it works out well for you. Looking at my above posts, it sounds like I’m already starting to repeat myself!

So, sorry about that.

I did 20 hardwood cuttings in February from my D. Virginiana rootstocks (around 15 cm tip cuttings) and 8 rooted. I used 4000ppm IBA and kept them out over a heat pad with thermostate adjusted to 21 Celcius. Now, 5 of them are alive and growing.

I wasn’t so attentive to them during this process. With a lit bit more attention I am sure success rate can be around 60-70%. 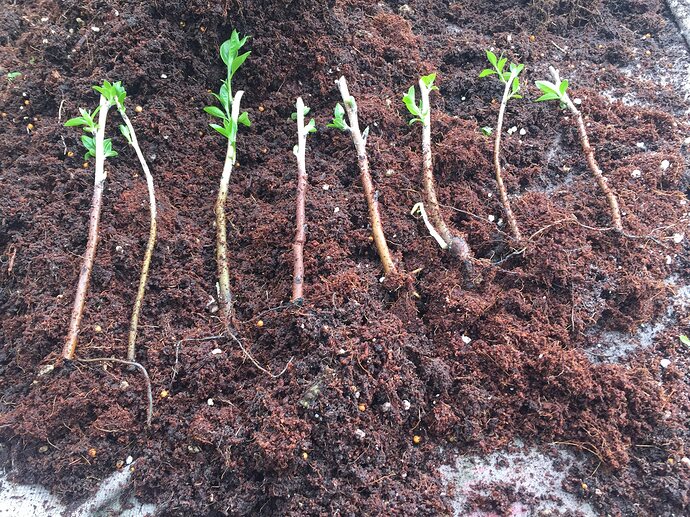 @Osi thanks for sharing! That is promising for future experiments. Please keep us updated if you try again in the future.

@disc4tw Hey Ryan how did operation order doubling go for you on the persimmon seedlings?

Were these actual cuttings (fully taken above ground) or were they suckers?
It appears that the cuttings were etiolated as described earlier by @jcguarneri

It did not go well this time. I had issues with some sort of mold/fungus development in my potting setup and it ended up killing the vegetation growth of all my cuttings. I’ll have to be prepared to spray something next time around. It’s always good to share honest feedback, especially when stuff goes wrong. Hopefully this helps someone else to be successful, including me.

I can’t address persimmons specifically, but I propagated a daphne bush in the following manner.

I first bent over a low branch to touch the ground midway along its length, and noted the point where the stem would be buried. Then I wounded it there by shaving off about an inch of the bark to expose the cambium. The wound was then dusted with rooting hormone and buried about an inch deep, kept in place with a stone. The end of the branch (with leaves) was allowed to poke out above ground.

I patiently waited a year, then separated the baby by cutting the branch between the mother plant and the wounded area. Continued leaf growth showed it was on its own roots. I then waited until the following spring, when I dug it up and transplanted it successfully.

The takeaway seems to be that wounding plus rooting hormone might mean a higher success rate with persimmons, rather than simply burying a branch. Haven’t tried it myself yet, though.

As I mentioned above they are regular virginiana rootstocks grown in full sun. I took the tip cuttings and used the rest for grafting in May.

I put 7 cuttings in water in a container like a cut flower would come in. 7 in dirt in the same drink cup. Set in a south facing window and treated (neglected) like any other house plant.
One in each group bit the dust early, the rest held leaves till they started turning fall colors. 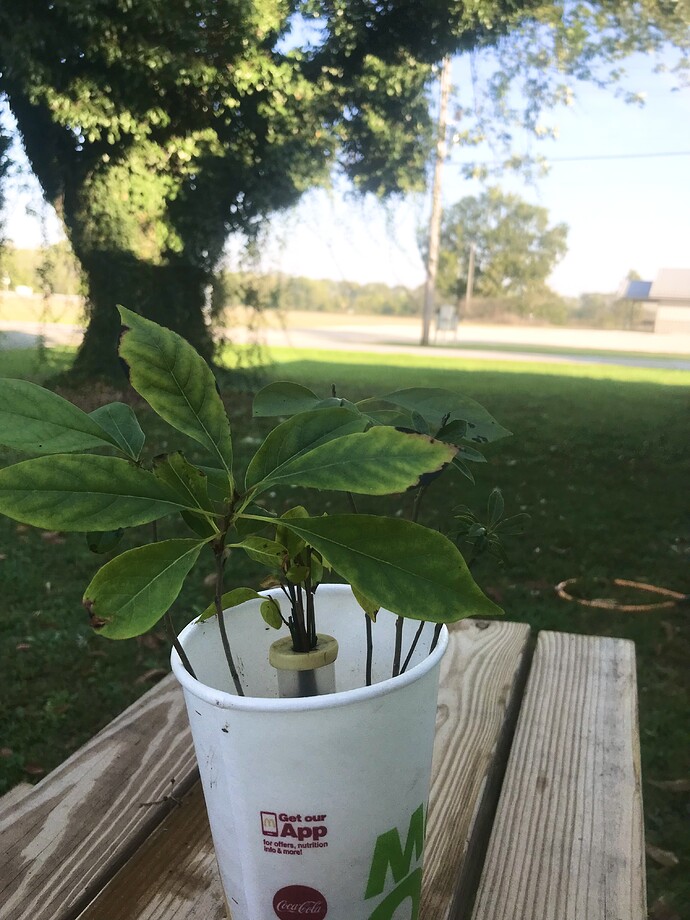 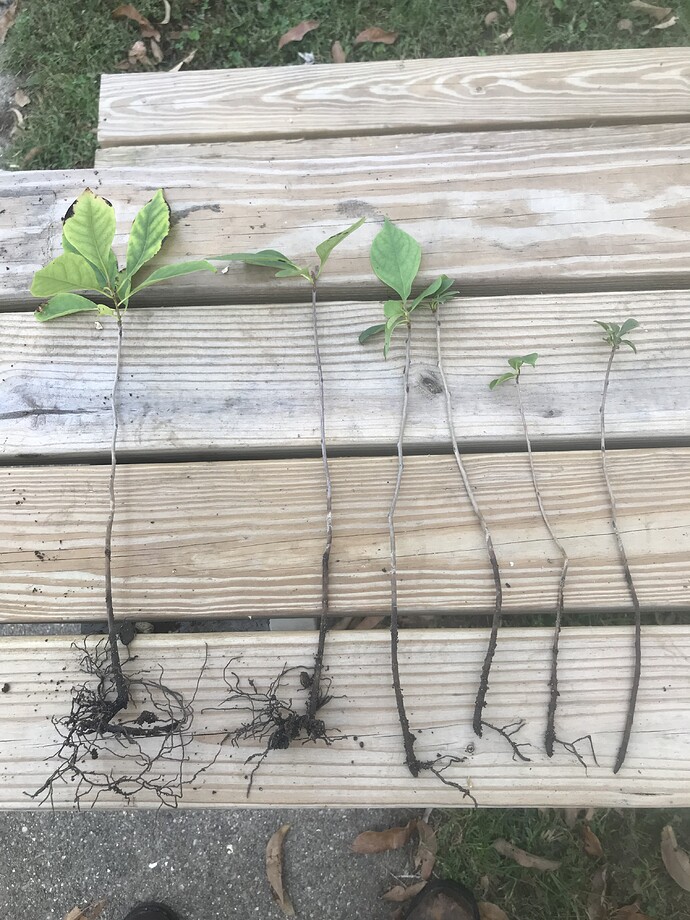