Seattle should be moving to zone 9a in the next update

In the USDA map based on data as of 1990, Seattle was placed in zone 8a, meaning the 30-year average of the annual minimum temperature was 10-15°F at that point.

The latest USDA growing zone maps were based on 2012 data, when Seattle’s number was in the upper teens and we were moved to zone 8b.

Well I don’t know when the USDA will be updating their maps next, but at least for the official Seattle weather station, our 30-year average is now 21.2°F, which would put us in 9a if the map was re-drawn now:

Zone pushers rejoice, but everyone else feel free to have less joyful feelings.

I would have guessed we were 9a already. Good to see this data.

Citrus usually handles 9a just fine but our extreme winter rain and cool summers does them in.
There are very interesting palms over at the arboretum. — I would have thought they needed a tropical climate. They grow about as much in 20 years as a palm in the tropics would grow in 4 years. Sunlight and heat units do matter.

There are very interesting palms over at the arboretum. — I would have thought they needed a tropical climate. They grow about as much in 20 years as a palm in the tropics would grow in 4 years. Sunlight and heat units do matter.

I’m hoping my Jubaea chilensis manages to survive, it’ll be going in the ground this year or maybe next. Wanted to be able to bring it in if we have any real bad cold snaps so it’s in a 15 gal pot for now: 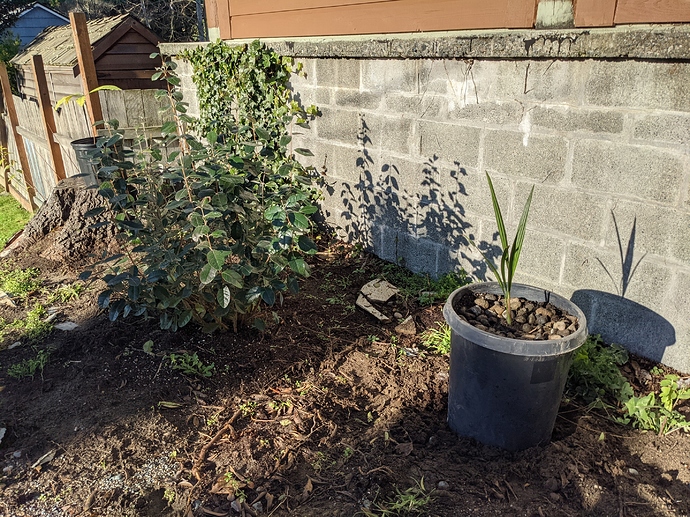 Where did you find that data? I’d be curious to see those numbers for my area. We’re nominally right on the line of 5B/6A, but the few winters I’ve been here lead me to believe we may be solidly in 6A at this point. Need more data to confirm this, though.

I see no reason to call this a trend.
Have lived here most of my life
Mild wet winters
a few snow days
Mild summers
We are a maritime climate with some Mediterranean influence.
But
We all tend to find what we are looking for.

We all tend to find what we are looking for.

Which is why it’s nice to have these long-term datasets. Makes it easier to take confirmation bias out of the equation.

The record will need to cover more than 10-20 years.
There was once
a sheet of ice
Covering the Puget Sound
All the way to Toledo.
I’m sure it was quite cold
For the time
It was here.
Unfortunately
Accurate weather records
are a recent phenomenon.
And only 2 years ago
Olympia was hit
with a late winter cold snap
Over a foot of snow
Lasting for 2 weeks.

Boizeau, I’m not sure what your angle is. We’re not talking about geological time scales. We’re talking about weather for growing fruit trees.

To the extent that zone maps are useful, it looks like Seattle will belong in a higher zone that it was prior. That’s using the same methodology on which the zones are based. If it later cools down, it will deserve a lower number.

If it later cools down, it will deserve a lower number.

In 1999 the average low was 30, seems like the average is fairly constant. Man that was a hot year! It was really hot here too. Seems to dip to the teens and go back to 30 and dip again. I would hope they base data on all historic records, and not hunt and peck for the numbers.

swincher described the methodology, which I’m not questioning. I interpreted swincher’s post to mean that it is established by taking the lowest recorded temperature for the year, one for each year, and averaging the preceding 30 consecutive years’ worth.

If they established the zones every year, it would be a 30 year moving average of each year’s lowest recorded temperature.

This is just what I’ve deduced from this thread’s originating post.

Seems 30 years is short sighted to me. Probably very practical, and useful, short term. Excludes the true average over longer times. Which I myself would rather have. I want to know all that is possible.

I’d be more concerned about the averaging than the time period.

Got the data from here:

And yes, I was just referencing the methodology used by USDA, which @ramv correctly pointed out is not the best way to decide what will grow.

It allows you to download all daily weather data from any particular weather station for as long as it’s been collecting that data type. They also detail whether the station moved and when, so you can separate any influence that may have caused.

To get the annual minimums and average I used the MINIFS() and AVERAGE() functions in Google Sheets. Happy to share the exact functions I used for anyone who wants to do something similar but isn’t good with Sheets, but you’ll have to adjust column numbers based on which data types your station collected.

So many variables … even the “official” temps can vary by 10 or 12 degrees depending on which authority is making the report.

So far as I’m concerned a 20 or 30 year moving average is not what I want to look at–I want the records since 1887 (or whatever year they go back to in a given town).

As I posted on another thread, we’ve been on the edge of z.7 in zone 6 some 60 years ago, and and back there now after being in z. 5 for several years. I’d rather have the 130 year minimums and maximums rather than the 30 year set.

And since Lake Cumberland was impounded in 1950, only 1977 and 1978 did it ice completely over. January 1977 was and is the all time record cold month for Somerset, KY…with 21 days going below zero.

So, I still think the 130 year highs and lows are more apt to tell me if a tender plant will likely make it in the long term.

Perfect, thanks! I’m bookmarking that page.

Our maritime climate does give us mild winters “usually “
But it also cools our summer weather.
So even though many plants can survive the winter
It doesn’t follow that we have enough heat
for heat loving plants.
Grapes are much happier

In Eastern Washington.
With a few exceptions.
And our abundance of chilling hours
32-50 degrees
Stimulates early bud break and bloom
on many fruits
Leaving them to late spring frosts.
Especially Stone Fruits.

I just did a dual request for all available records for the UW station, which collected data from 1909 to 1987, and the SeaTac station, which starts in 1948 to present.

At some point later I’ll post a chart of the running 30-year average of annual minimum temperatures, just to see how the USDA zone would’ve changed over that period if it were updated annually instead of periodically.

Perhaps including median, mean, and standard deviation will make your results less controversial to some people.

I was just using the metric used by USDA to make their growing zone maps, I don’t really trust myself to know what other metrics would be most useful, but I’ll include those that you listed in the chart once I get that new dataset.

I’ve left my Meyer lemon outside for two winters.
It survives but isn’t happy about it - lots of leaf mildew. It’s about ready to be composted.
The novelty wore off.

My zone might be a little harsher than yours in Seattle, being less close to ocean than you, a little higher altitude, and I don’t know about urban heat island effect for you.

About 15 years ago I grew a blue gum eucalyptus but it was killed one winter. I have an Alpine Eucalyptus that seems OK here, a little hardier species. I have three Trachycarpus palms which are nice but produce nothing edible. One is 21 years old.

I guess it’s too soon to plant date palms here