I’m going to be using this thread to post updates about my various avocado-related experiments and projects, which will mostly involve close documentation of the premeditated killing of countless avocado seedlings each winter in my yard in Seattle. This project was inspired by efforts of avocado enthusiasts Craig Hepworth and Oliver Moore in North FL, where they have similar minimum temperatures but a very different overall climate than Seattle.

As it stands now, my plan is to construct a greenhouse in my back yard this summer, and in that greenhouse I will keep a few avocado “frankentrees” grafted with every allegedly cold-hardy variety I can get my hands on, trying to hand-pollinate and cross-pollinate them as much as I can whenever they flower. Seeds will be germinated in the greenhouse and then grown on the patio until their first winter, which they will spend back in the greenhouse. Then, they will go into the ground in the spring and be given varying degrees of shelter or protection their first winter outdoors. I expect very high casualty rates.

My (updated via edits) current inventory of grafted varieties (including both established potted trees and freshly grafted scions) is:

My first round of seedling victims have already begun to grow, and will include seedlings of:

The only tree that has flowered under lights indoors this winter is the aptly named Winter Mexican, but since it’s one of the least cold-hardy varieties I have I’m not expecting much from any seedlings it may produce. Here’s the latest photo of fruitlets setting, though I won’t be surprised if they all drop before maturing: 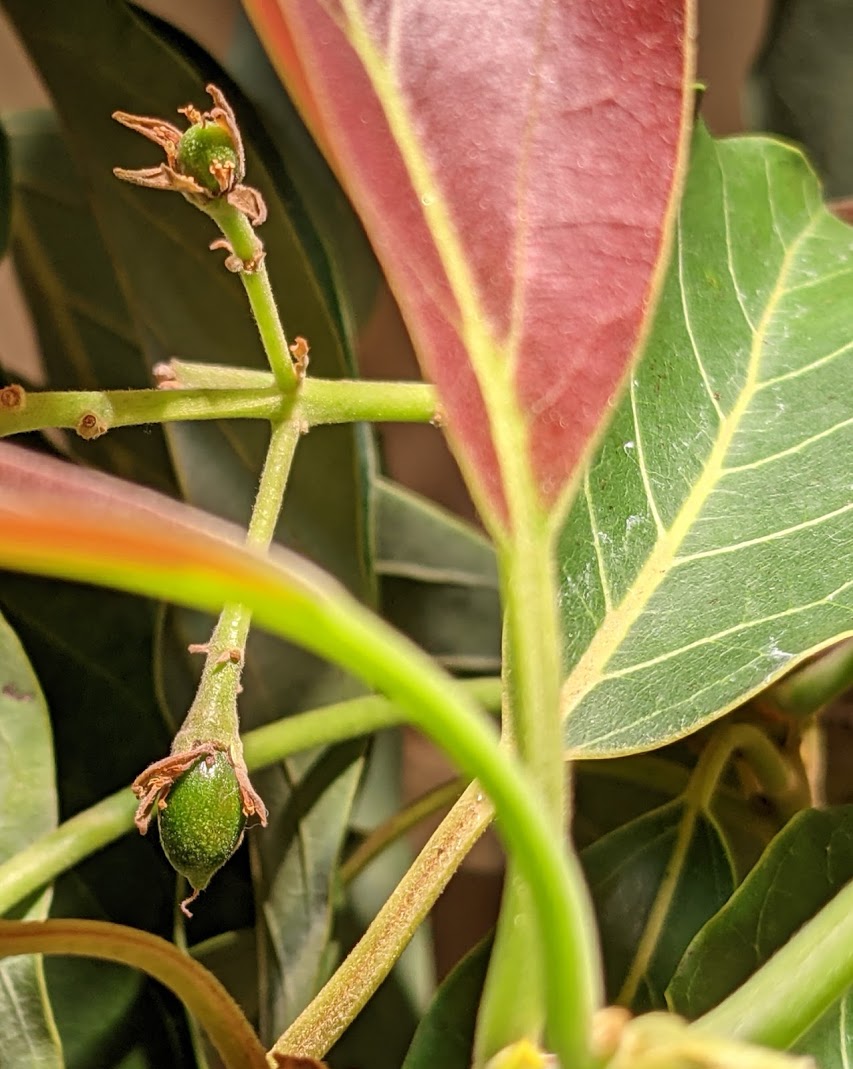 For now, I’ll wrap up with a photo of my first ever attempt to top-work a tree, this one has Joey (one tiny scion), Aravaipa, Second Red, and Royal-Wright on it: 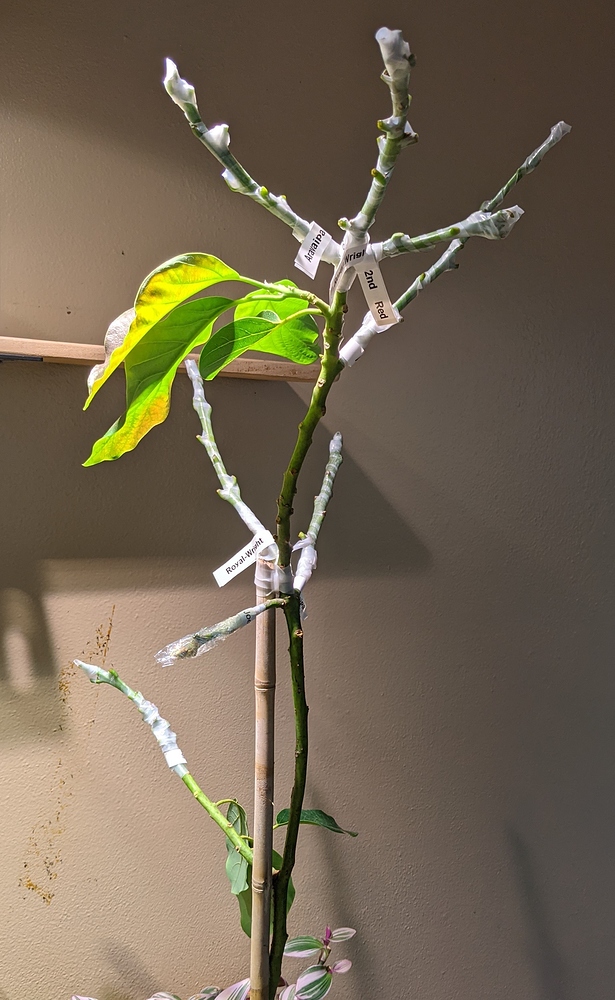 If anyone has any suggestions for varieties to add – including any unnamed Persea americana var. drymifolia (Mexican race) avocados, or has seeds from any such trees that you want to contribute to my experiment, drop me a PM or reply below!

19 Likes
My first baby 'cados!
Suggestions for a weather station with reliable soil probe?
Why didn't I learn about cold air drainage sooner?
Can fruit be grown in the Pacific Northwest?
Please help me understand my first ever soil report
Pacific Northwest Fruit Growers
Bradybb January 14, 2021, 1:41am #2

Here’s a couple of old threads about the cold and Avocados.
Joe grows a lot of things in California,where it gets around freezing occasionally.It was probably the Duke,I was trying to remember,when we talked before.He also has an interesting idea about planting seeds outside in October to get the best ones for root stock,but not sure if that will work here.

Are there any avocados that are truly cold hardy? General Fruit Growing

Location is Paradise CA in zone 8b (between Paradise and Oroville). It will snow there at least once a year, but no significant snow accumulation. Dominant tree flora are Bay Laurel, Digger pine and decidous oak species. Trees are planted with southern exposure and placed near a stucco wall. They also are trying out the cultivar Surprise. Basically you’re going to want to look for varieties that are descended from genetics taken from the Mexican highland areas.

Duke Avocados. Very creamy, clean, no strings, ultra thin skin that you can bite into and eat. No need to peel off. And unlike most avocados when opened, the Duke Avocados don’t brown easily! Very good and tasty especially for avocado toast. Avocado Flavor is milder but creamier than Hass and I like it. [image] [image] The Duke Avocados are really big this year. Normally they’re only half this size! I posted the wonderful story about this very cold hardy avocado in my earlier posting. [ima…

It was probably the Duke,I was trying to remember,when we talked before

My understanding is Duke is only cold-hardy compared to commercial guatemalensis dominant cultivars (low 20s) but not in the same league as the hardiest drymifolia cultivars, which allegedly are hardy to mid-teens (or some even claim lower but that seems impossible). But I’d definitely add Duke if anyone has seeds or scions to spare!

I’m sad to report only one Winter Mexican fruitlet remains after I accidentally knocked this one off while reaching past the tree to brush off the shelf behind (a task I then abandoned for now): 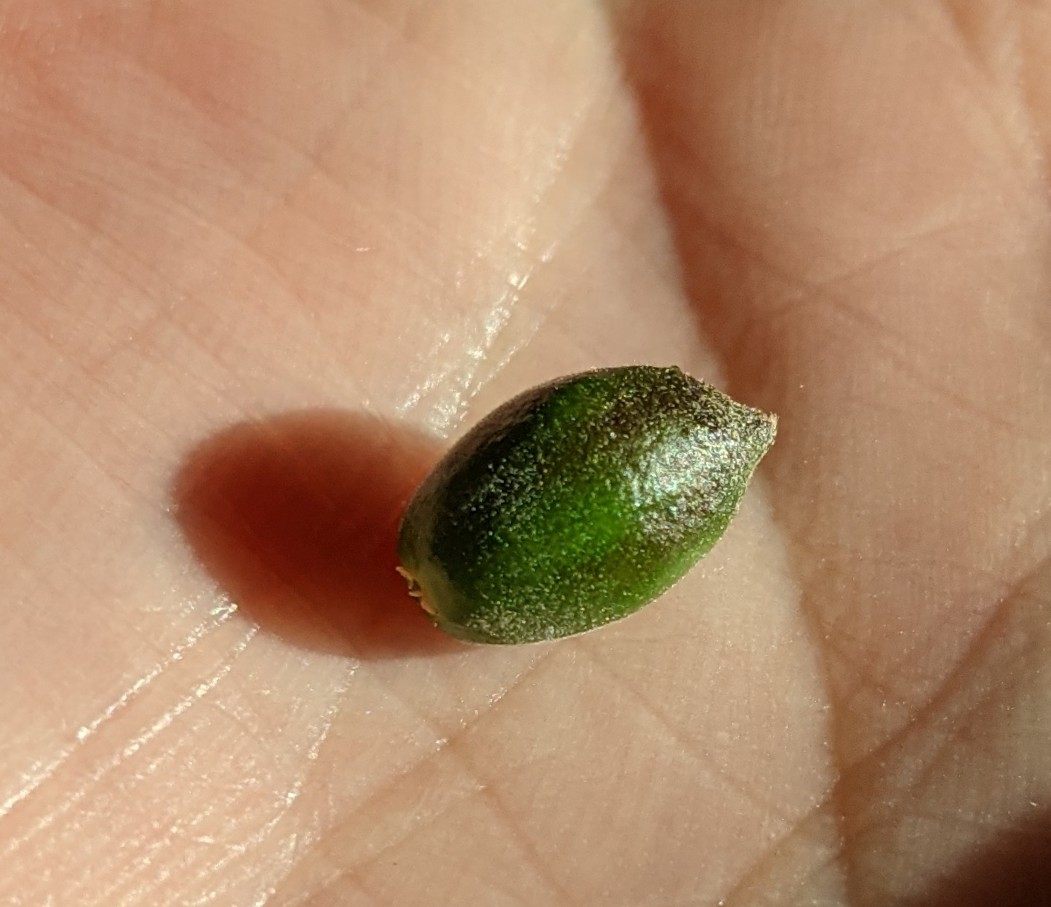 I am not surprised since I thought this tree was too small to bear this year and I’ve read about the very low rate of fruit set in mature trees (a few hundred fruit for millions of flowers). Still disappointing! Here’s the sole remaining fruitlet, hopefully it’ll defy the odds and persevere: 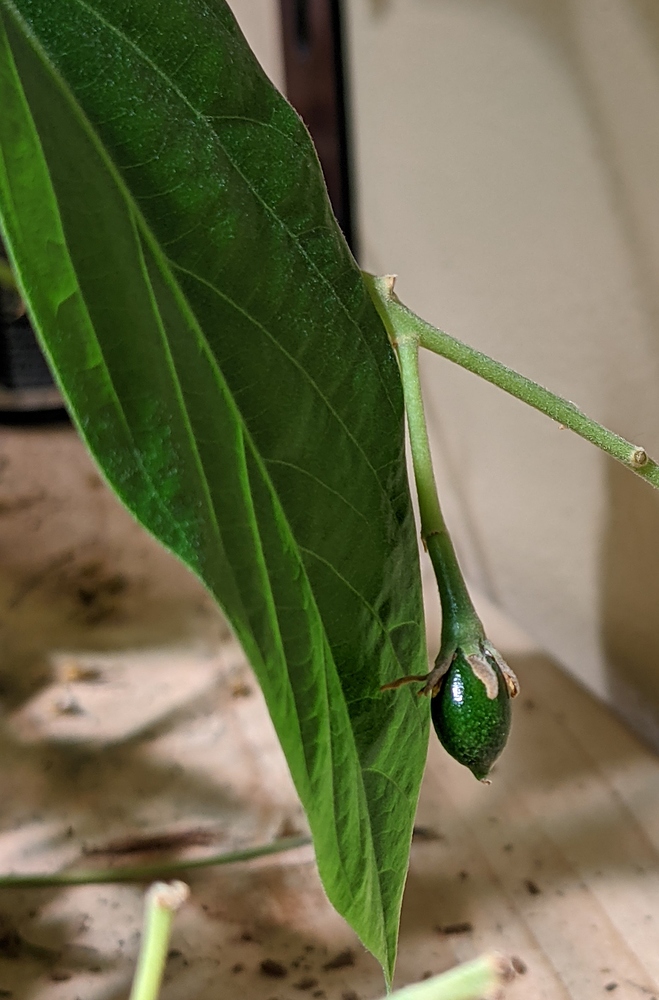 In other news, the newborn Hass seedling that I planted in the yard has survived 10 days so far, but hasn’t grown at all… tonight we get a mild frost (30°F) so this may be its last day among the living: 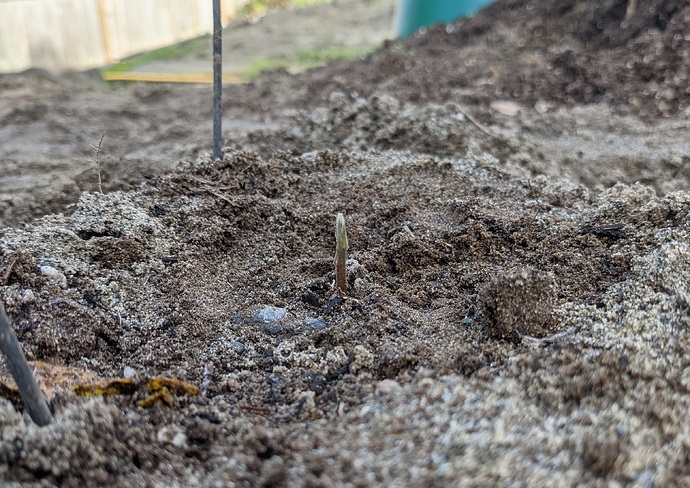 Finally, I planted out a Mexicola seedling (euthanasia?) that was suffering from root rot in its pot about a week ago (I started out using a potting mix with too poor drainage), its symptoms seem to have improved slightly on the new growth since it went out, but I’ll be curious to see how it weathers its first frost tonight since I know even cold-hardy avocados are usually not hardy when small like this: 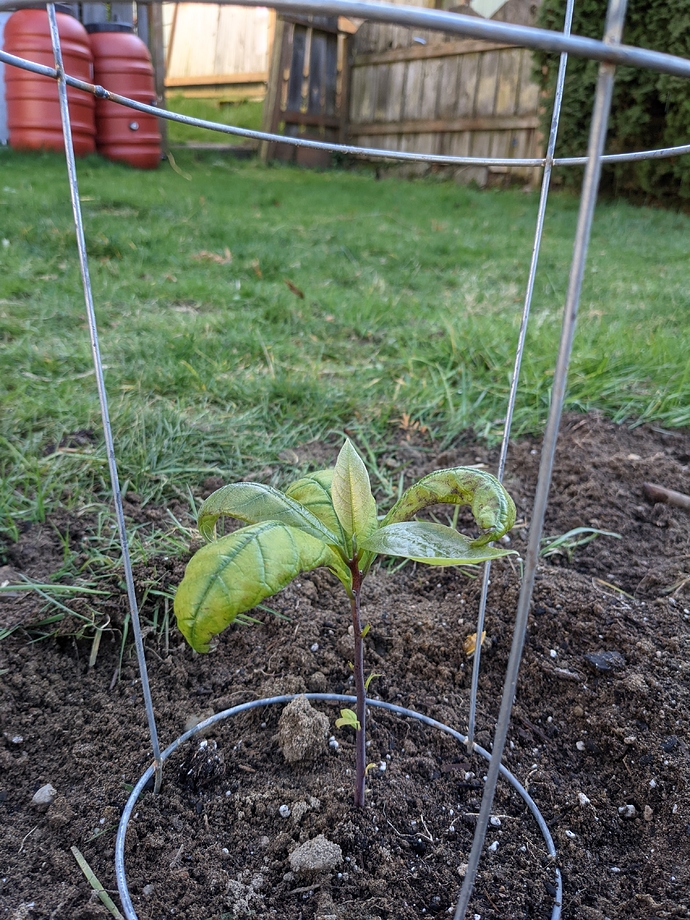 I’m lucky that our lot is on a pretty significant slope, but terraced, and our glacial deposit soil has pretty great drainage other than on the lowest level of the yard, where the topsoil drains well but there’s a glacial clay layer below the surface (the Lawton clay member of Vashon group, for any geologists in the room).

For the upper level and middle level of the yard, water poured into a deep hole drains almost instantly, but at the bottom level it takes about 45 min to drain. I will probably be mounding any trees planted at the lowest level, but not elsewhere.

aravaipa intrigues me the most. I have seen youtube videos of a decades’ old and unsheltered aravaipa tree in AZ. Truly majestic and amazing having survived extremely arid–and acrid– soil conditions and survived 120F summers and several freezing winters.

also seen accounts of the fruit being similar to hass, but so far, no one has actually posted a photograph or video of that tree bearing fruits, not even just one fruit…

I got my scions from @Marta who has a a blog post that includes photos of the fruit, which appear to be smaller than Hass and green-skinned.

Thanks @swincher ! Literally the first picture i’ve seen of aravaipa fruit! Glad to see it bearing fruit in california.

so now, for self-serving reasons-- hoping someone posts photographs of aravaipa fruiting in AZ, as that would increase my chances of being successful here in vegas(that is if i could get my hands on one, haha)

that is if i could get my hands on one, haha)

Aravaipa is very vigorous, productive and precious, but the fruits are not close in flavor to Hass or Mexicola. The fruit size is medium to large. Always larger than Mexicola. Can be smaller than large Hass. I’ll look for last fall pictures

love it!
took a peek at some of her webpages and she does speak the “fruit-growers language” fluently.
quite the eye-opener seeing her post on kaester mulberry being able to root, and that noir de spain seems unable to

was busy typing about you at about the same time you posted about aravaipa.

thanks for your description of aravaipa. You know, for the loser typing this(in his whereabouts–las vegas, nv), he’d be happy if he could get any avocado cultivar to fruit, even if subpar to hass by a country mile…
looking forward to growing it once we move to another property

do you sell aravaipa seeds too? I am more worried about the soil conditions here as much as am worried about our extreme summer and winter temps…

No single picture of ripe Aravaipa from last fall, and I had close to 100 of them. But I found Duke along with Mexicola 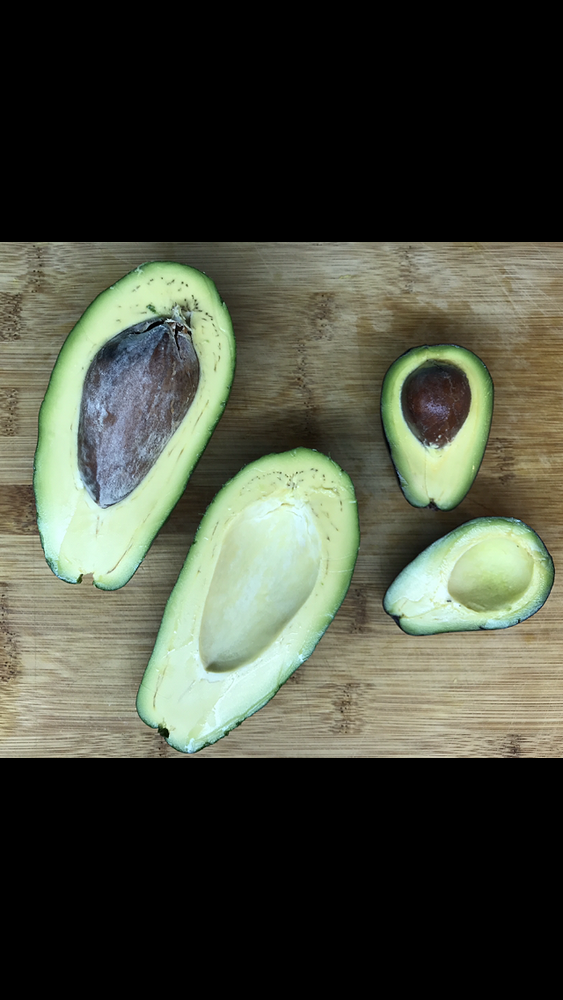 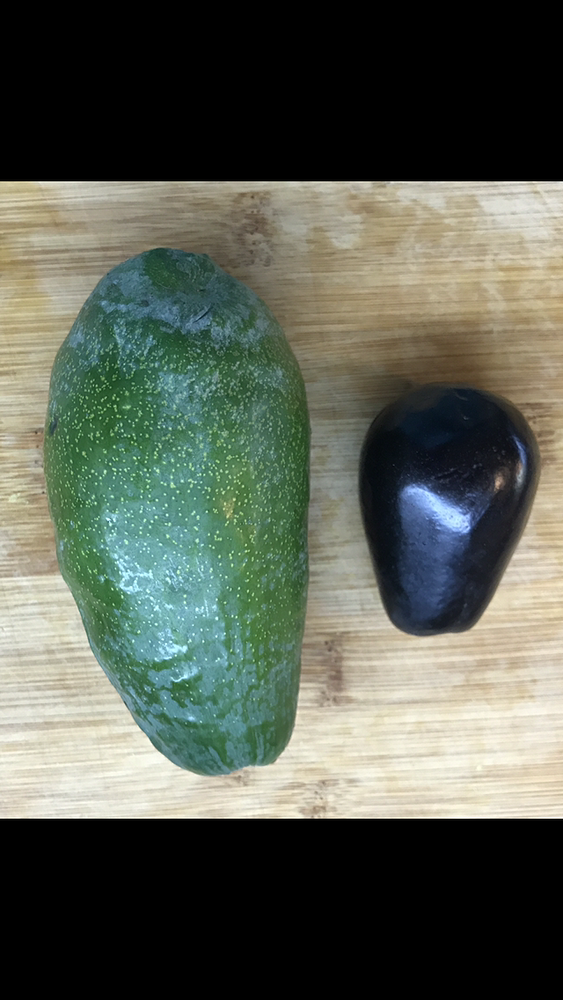 Any chance you’ll be offering any Second Red seeds? I see those should be ripening soon.

Check with me in September. I only use Aravaipa

will surely do that!

and while we’re at it, do you have any experience(or know of anyone) airlayering aravaipa avocados or propagating via tissue culture?

The Second Red has shorter internodes and was affected by mites last summer. No fruit this year again. I have a little wood, and I usually include a stick with other avocado scions’ orders. The scions I cut from this tree now are shorter than from the other cultivars.

I would not use Second Red seeds as rootstocks. This is the most cold sensitive from the ones I consider cold tolerant cultivars.

No, I didn’t play with overlaying avocados. It could be possible, as well as TC.

That’s a shame! I got a couple in my order (thanks!) and hope the grafts will take. Thanks again