As far as flowers go in regards to pears these are pretty unique. 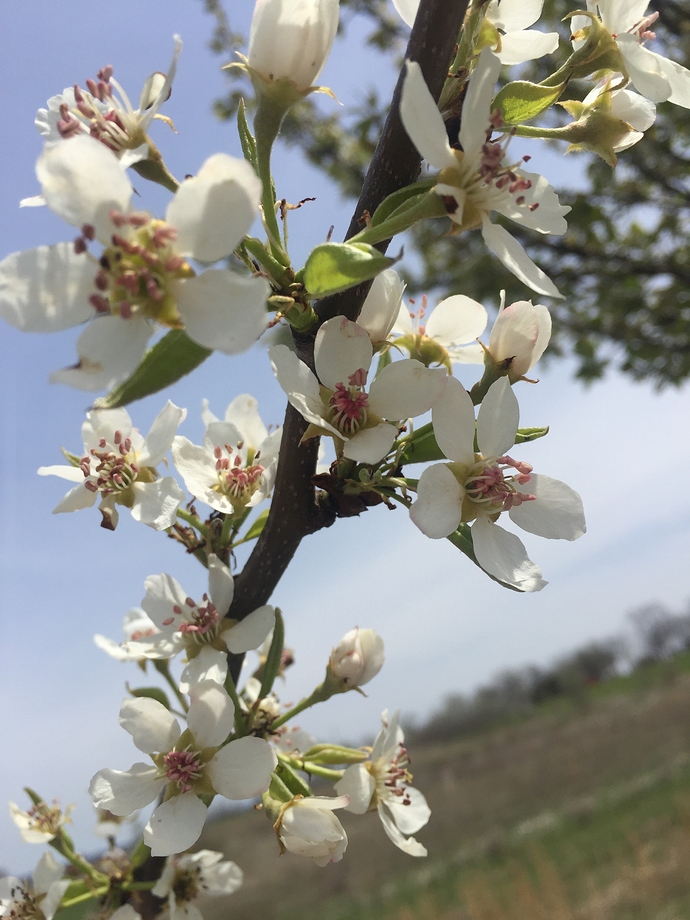 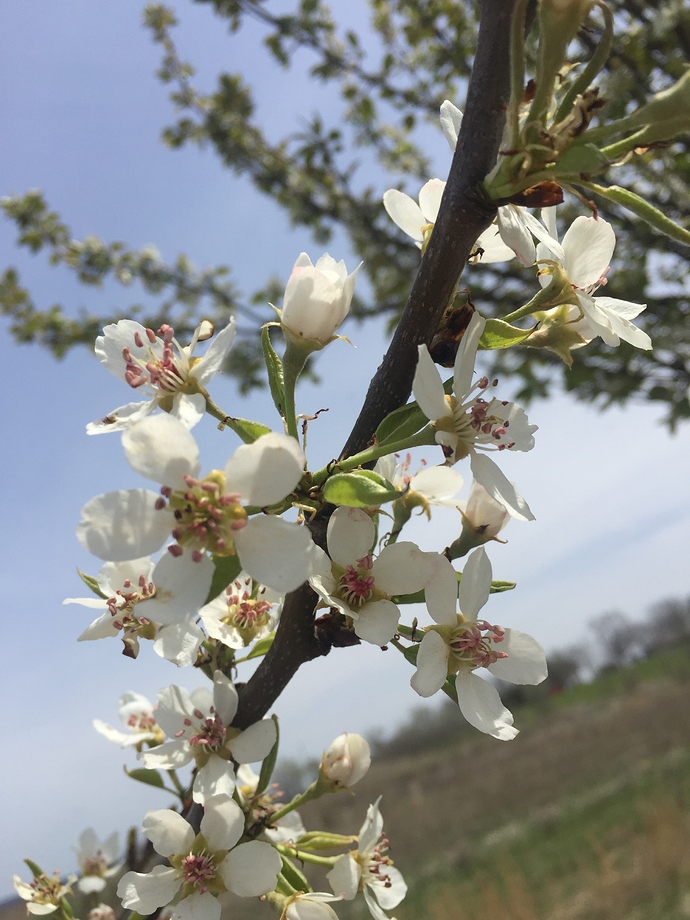 Will this be its first year fruiting for you, Clark?

I’m not ruling out that It could be an interspecific hybrid.

@SMC_zone6,
Yes this is the first year it might produce fruit.
@marknmt
They do kind of look like apple blossoms except color , timing etc. they sure don’t look exactly like pear either. I think I can rule out shipova http://nwfruit.org/#page/717. 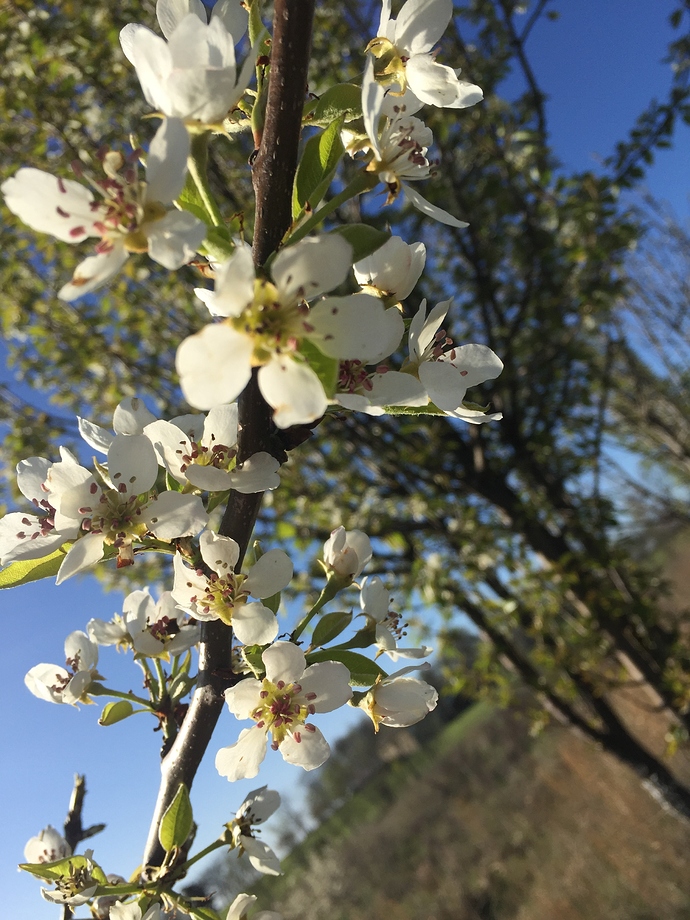 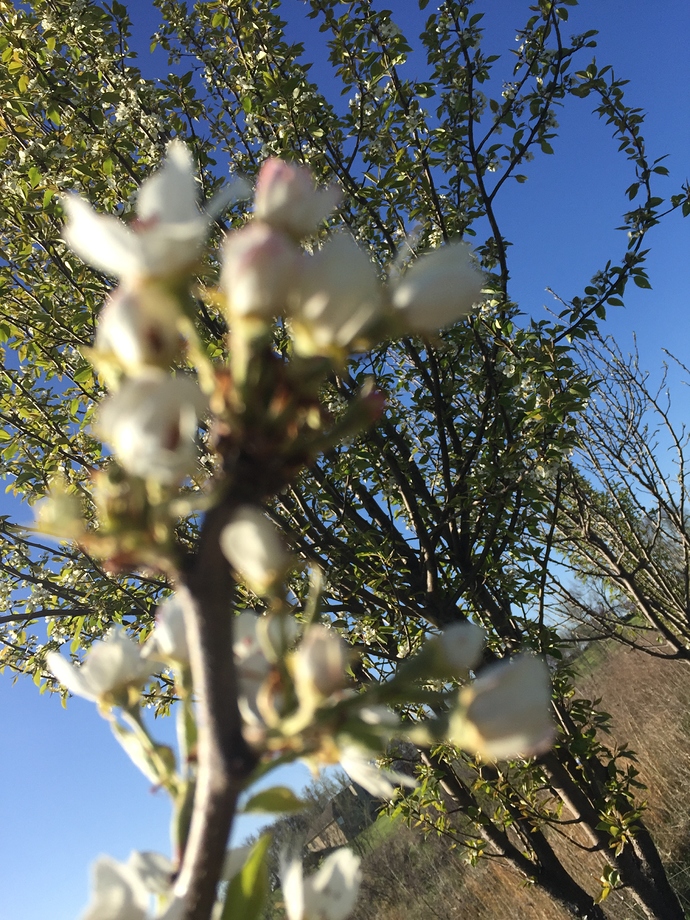 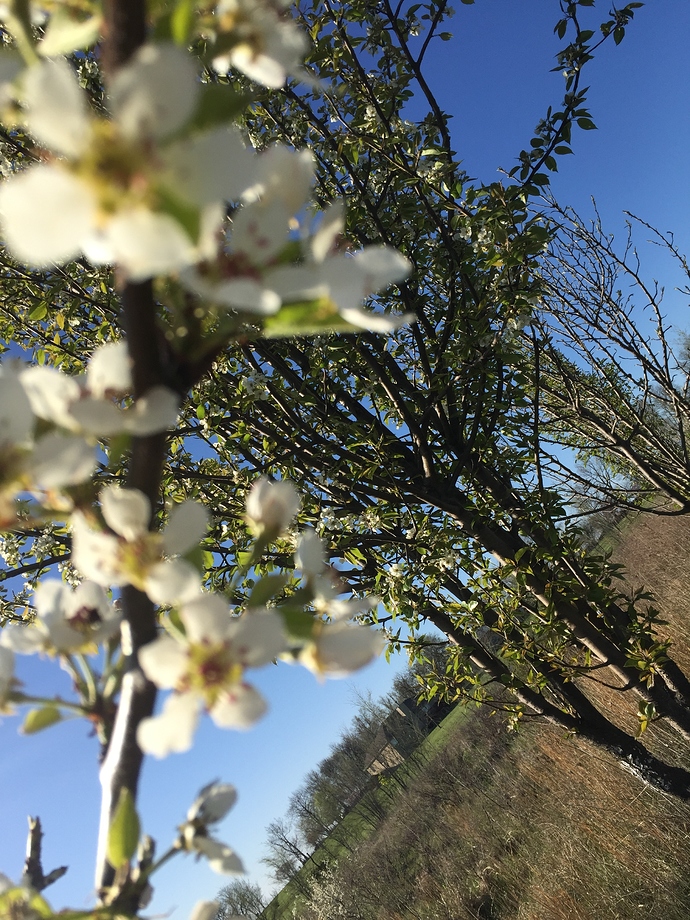 It’s exciting- I do hope they fruit well and you can give us the answer!

They don’t have much of a smell. Does any pear bloom smell great? My pears may not smell at all or they smell bad.

In 2019 i got these fruits. I dont feel any closer to knowing what these are. They took a long time to produce and they are a low quality fruit thus far. 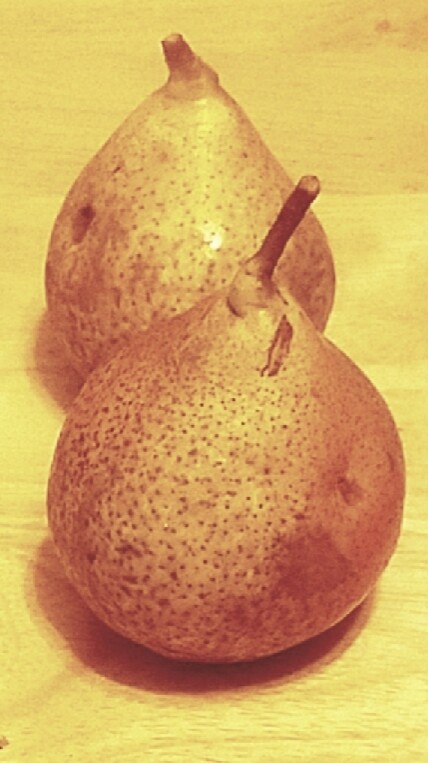 They remind me a bit of this unidentified pear that I am growing. It is also not very good. Mine did not separate nicely from the tree.

Maybe someone might recognize this pear. It was sold to me as Patten pear, but I think it’s not. It doesn’t look like the pics of Patten on the USDA site. USDA says Patten is a very late pear. These pears didn’t seem terribly late as I picked them Sept 10 in south central Nebraska and about the same time as some red bartletts (Olympic Giant was picked Oct 1 but that was a few days too late). These pears do not separate from the tree when flipped to a 90 when ripe. Instead, the stem will pull ri…

Those fruits look kind of like Ya Li, and it is the lowest-vigor pear I have.

The flowers remind of ya li but it is very different. This tree took many many years to flower and is fireblight susceptible. It is stunted like im holding it back. It is very slow growing. Ya li runts its self out with excessive blooming early. Good observations @Lucky_P 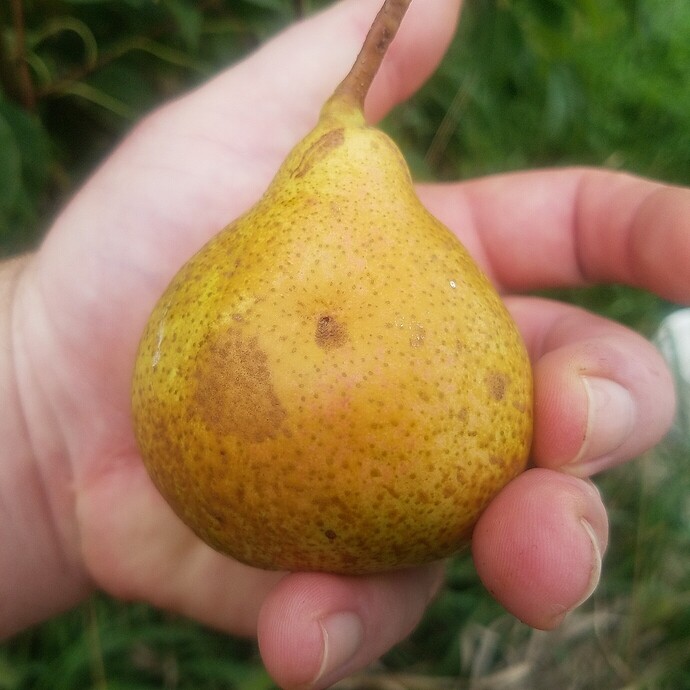 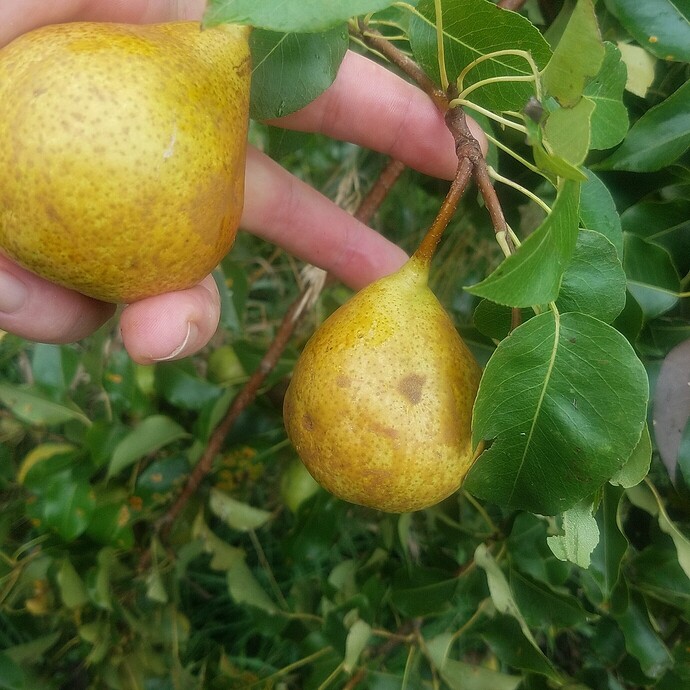 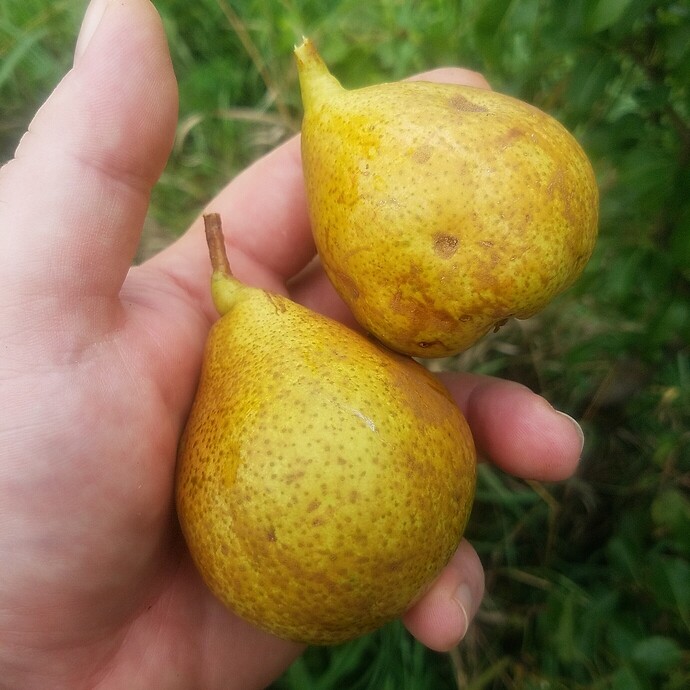 This is a different pear I thought you might enjoy. It’s an unknown pear rootstock that began Flowering today. Just took a quick photo 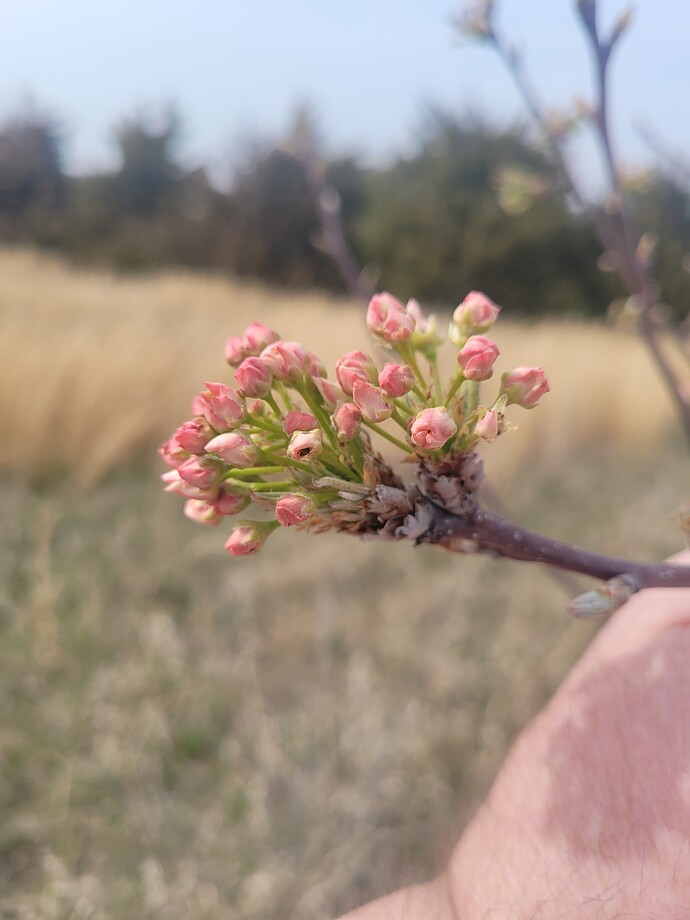 Update: appears to be ohxf333

Here is another unique pear. The tag was stolen I’m assuming by a bird needing nest decoration, or raccoon seeking his beloved, or just one of the many wind storms. Anyway here is the pear photos below. It could be Amire Joannet but I don’t know. Guessing that because of the heavy blooming. That is a heavy fruiting smaller european pear that ripens in July. Amire Joannet has very small 1 1/2" fruits. Dont know of anyone else who grows these ultra rare pears so there is no information on them that i can locate so far besides from the USDA in Corvallis. The information from there can be seen in this link
What Pears will you grow this year? 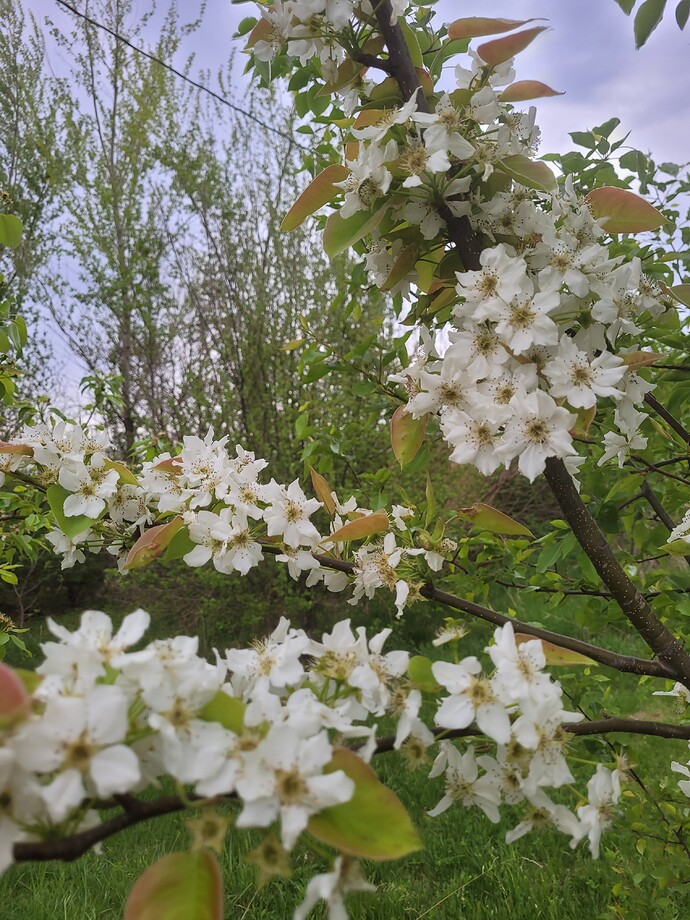 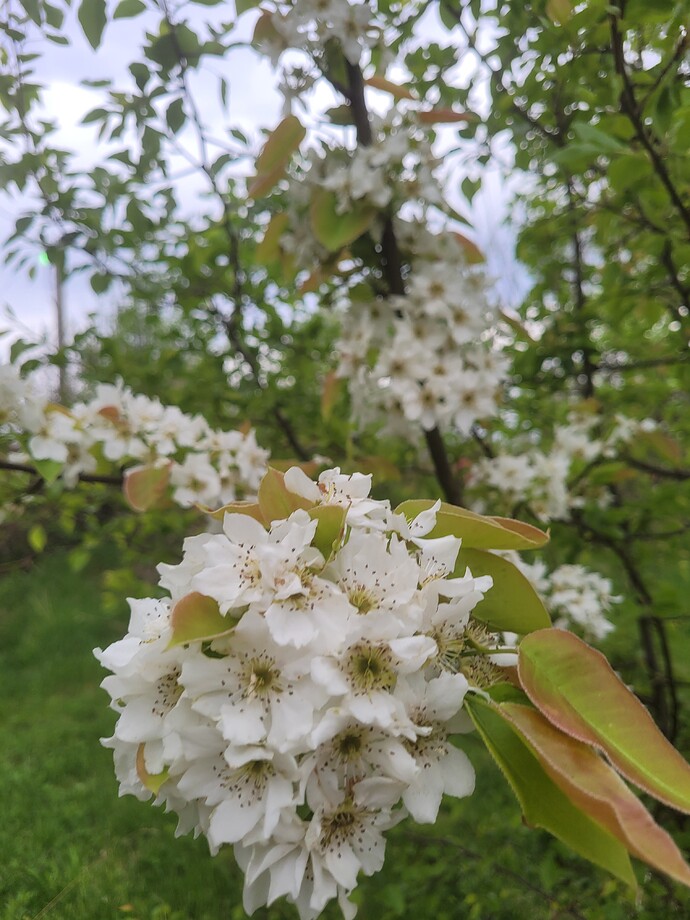 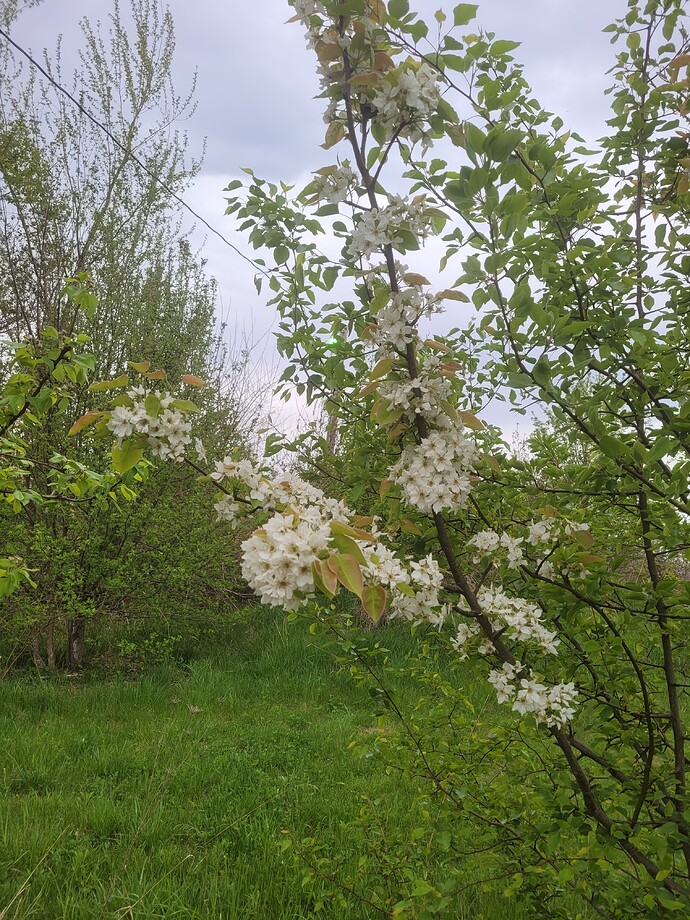 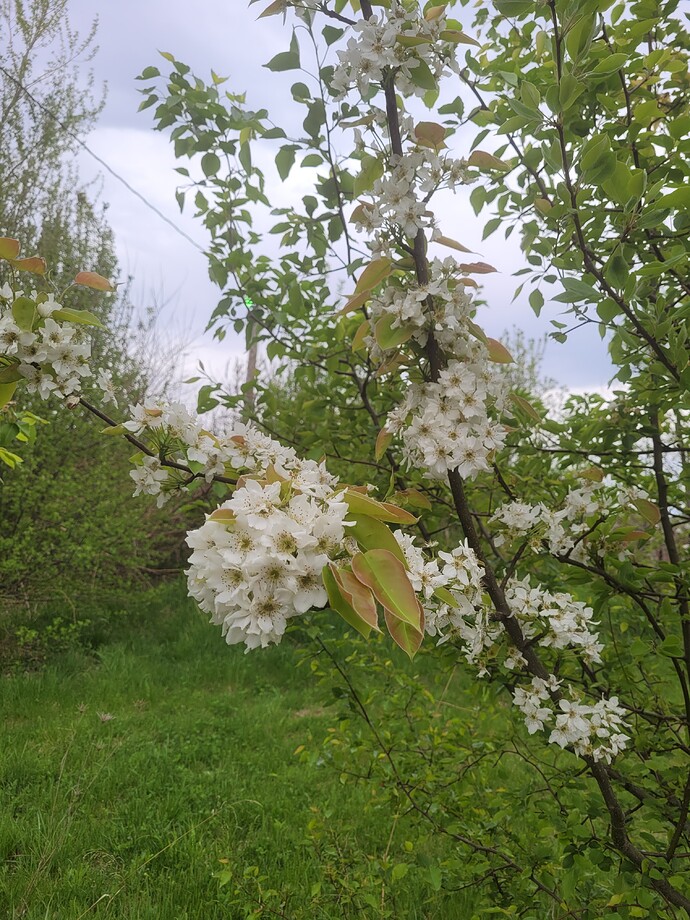 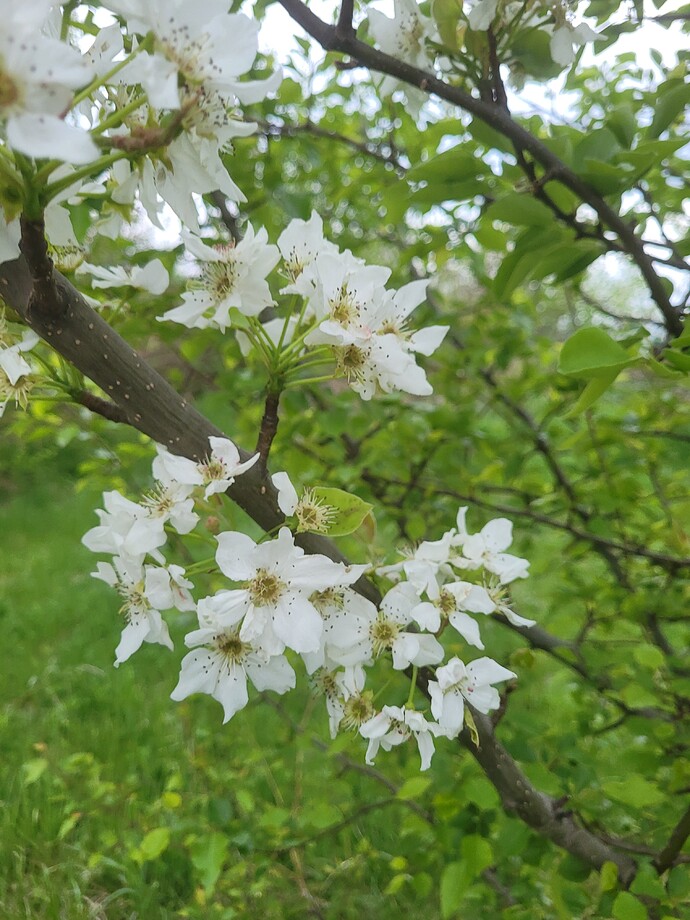 Update: Mystery solved on this one it’s amire joanett the tag was found under the growth I removed today.

This is a very old unknown pear which I’m suspicious could be Clara frijs. If it’s Clara frijs it’s loaded for its first year not dropping its fruits. This is a strange one because of the amount of time it took to produce! At the bottom of the tree I took a picture to show you how long ago it was. It was so long ago my grafting was different. Grafted lower in those days which I’ve not done in well over 10 years. The wood is very different colors between the scion and rootstock. 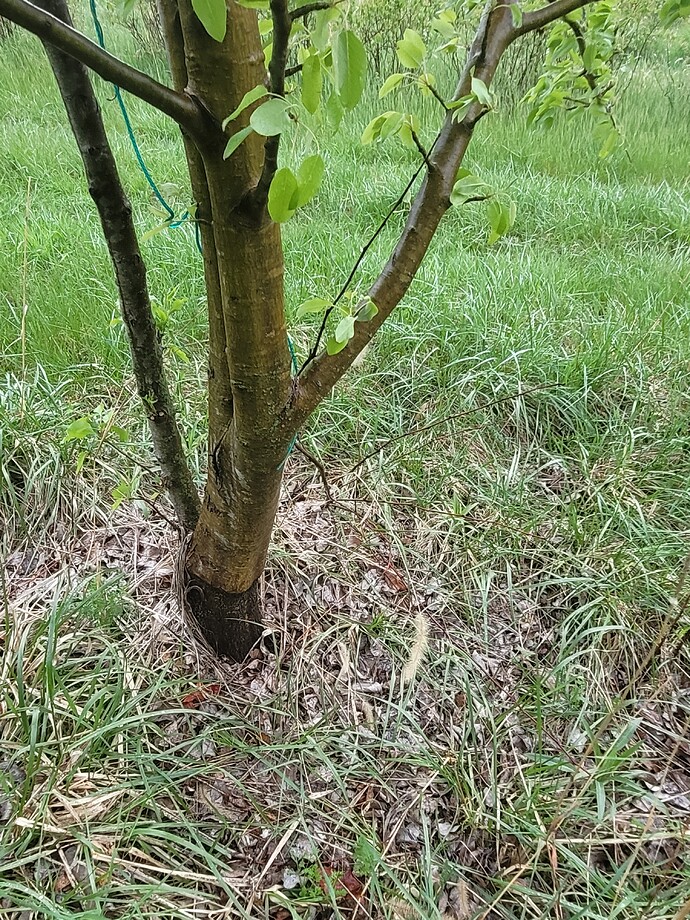 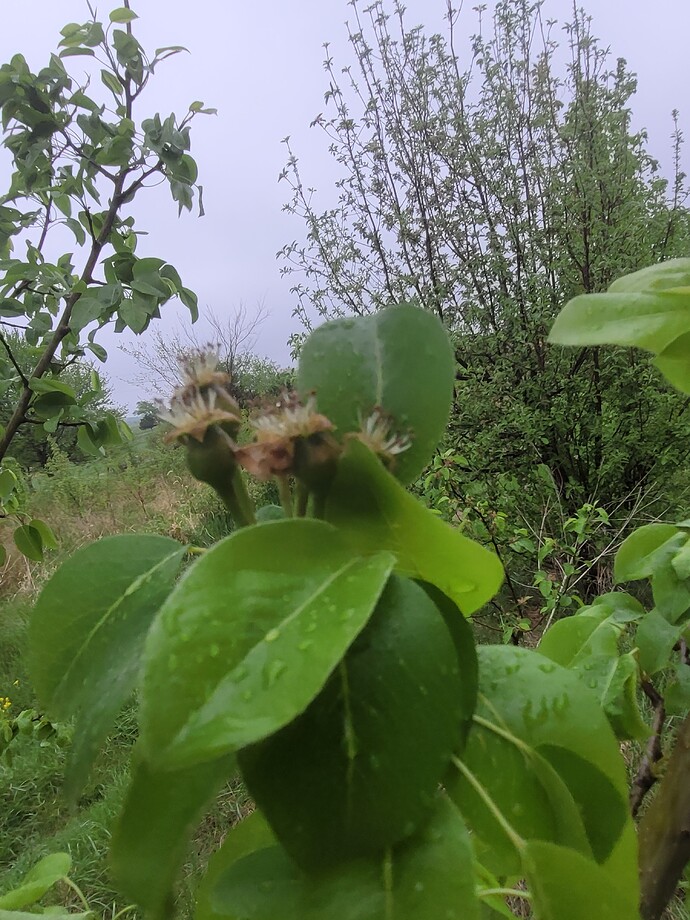 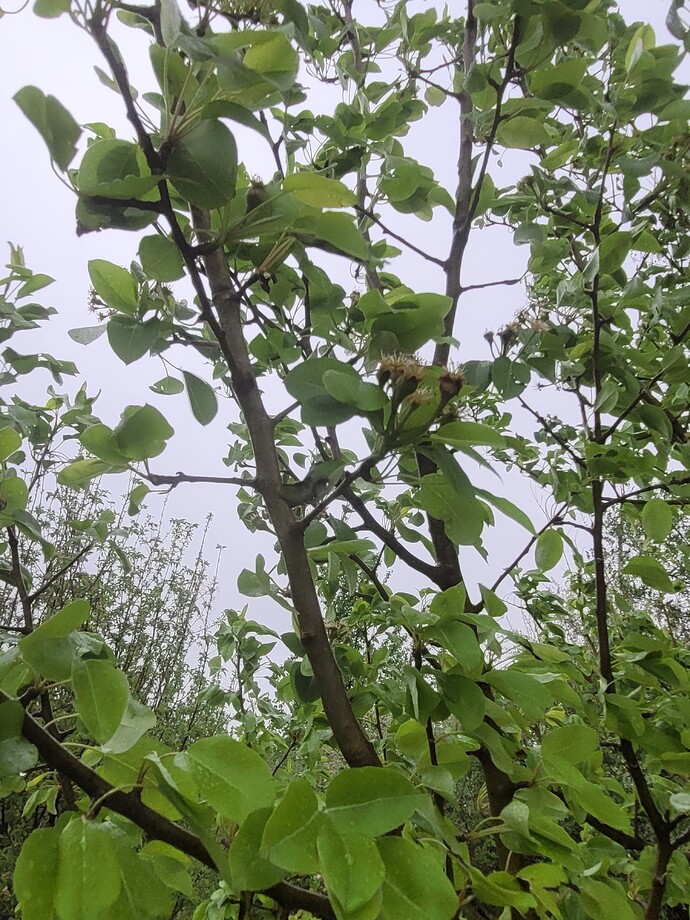 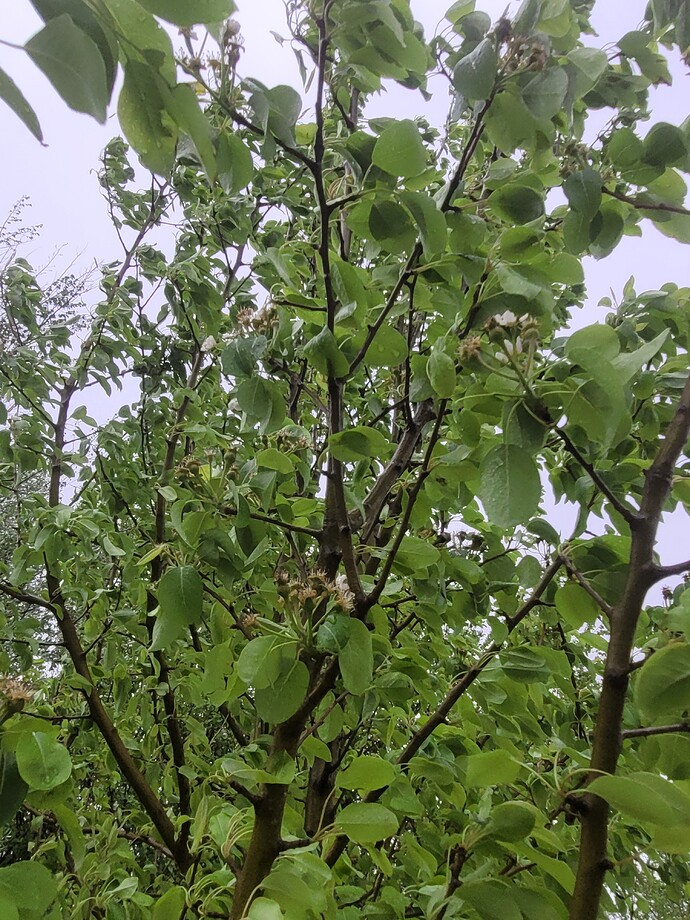 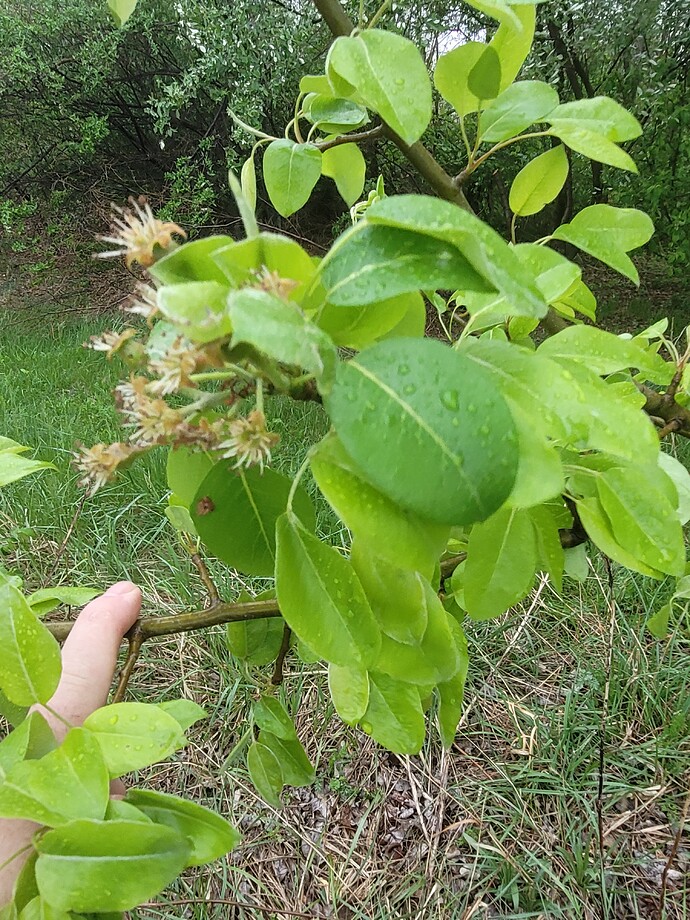 The unknown pear looks identical to Clara frijs I’m glad to have this old mystery solved.

Ate a heavinly tasting little pear today off a tree not more than chest high in very poor soil. It was supposed to be my small yellow pear but it wasn’t. It was splashed with red coloring on the top of the pear. Im trying hard to figure out what it was. There were 3 pears on the tree this year. It grows in soggy heavy clay soil on callery pear. This soil grows almost nothing its so bad.