Im currently experimenting growing pears that are very delayed in fruiting. The pear i grow that takes the longest to fruit is Clapps Favorite. Sometimes Clapps has taken 12 years before fruiting. Ayers typically takes 6 years and Clara frijs is similar amount of time it takes before fruiting. I have two pears im hypothesizing are atlantic queen and golden spice that have taken a long time to fruit (both have fruit this year). Its interesting because i thought it would be warren or magness but those actually produced fairly quickly for me. We know rootstock such as quince or ohxf333 produce pears fast. My theory is if a slow to produce pear is grafted on half a tree with a fast producing pear both pears will fruit around the same time and pollenation will be better. Grafted warren on the same tree as karls favorite and waited a few years and now have fruit on both sides of the tree. Magness grafted to ohxf333 produced fruit very quickly. This year i grafted many variety to harrow delight interstem as a test. My belief is fruiting is triggered by a hormone and once the pear builds the hormones to produce fruit it produces on the entire tree. The greater the hormones or nutrients the greater the fruit set. I also suspect some trees go biennial because they overproduce hormone and deplete nutrients 1 year and leave none for the next year. Just like people i believe pear hormones develop at different times depending on genetics. I made a plan to test the theories in my orchard and looked for an article to support my theory Metabolic Profiling of Developing Pear Fruits Reveals Dynamic Variation in Primary and Secondary Metabolites, Including Plant Hormones
Rootstock influences nutrient levels of fruit, fruiting times etc. Eg. Pear rootstocks influence on Fruit size . There is a great deal not known about the nutrients in fruit that no one really wants to know very badly. The truth is some fruits like blueberry that we eat make us feel good because they are higher in nutrients (proven in countless studies) and the same goes for pears but the studies of all the benefits have yet to be done. The rootstocks do have impact on nutrients of fruit.

Clapp’s is one of the first pears I grafted to my Golden Spice pear, which is on one of the OHxF rootstocks, and has yet to bear after ten years.

@marknmt
Are any fruit producing on the tree? My suspicion is if you have half the tree as harrow sweet or harrow delight etc. you get fruit faster on the otherside thats clapps favorite. I think once the tree detects fruiting hormones from the faster fruiting variety some of clapps branches will fruit. There are other questions i have that come up as i think about multigrafted trees eg. Are they more likely to get diseases because the attack surface size has been increased? Are the weaker pear breeds stronger due to the others grafted to the tree? Does storage time or ripening dates change? Etc…

I haven’t tried these combinations but I feel like you will get earlier fruiting with the harrow interstems. Thanks

@Auburn Im wondering if as pear growers we need to step up our game a little and get pears faster using the techniques i mentioned. Many pear growers get frustrated before they get pears! I think the pear market is lagging behind the apple market because they are slow to produce.

Clark that tree started producing the year I planted it, took a year off, and has been pretty faithful since- but not for Clapp’s, and a few others; Warden Seckel has been pretty good, and White Doyenne and Dana’s Hovey have given us a few. But the majority of the tree’s production is Golden Spice.

I don’t believe your theory is accurate, at least not with my experience.
I have an Ayers, which fruits very fast for me(2-3 years), half grafted
over to Maxine, which takes about 5-6 years to fruit. The Maxine grafts
are 4 years old and still haven’t even bloomed, much less fruited.

@rayrose
You could be right Ray. Whats very strange is maxine is half the age of ayers here grafted on callery and producing like crazy. An ayers i planted twice as long ago has its first crop this year. None of this is neccesarily definable at my orchard because im mostly using wild callery rootstocks which are all highly variable on the influence they have over the scionwood. The really odd thing is how am I getting so much production so fast now? Plumblee already has fruit!

I’m fairly new to grafting but i always wondered myself how different cultivars reacted when grafted on a different tree. now , take like i did this spring, and grafted 2 pear varieties on to a mountain ash. mountain ash is a lot more vigorous than a pear and usually fruits in 3-4 yrs. the tree i grafted on is 5 yrs. old. one of the pear varieties i grafted is fast producing. the other is slower. be interesting to see how all this affects fruiting time.

That will give us a lot more information when we see what your pears do @moose71. We will learn something from the experiment but it may not support my theory we will just have to see.

I know this setup isn’t exactly what your working on but maybe it is close enough to be relevant. My story is that my one standard pear tree is growing into a monster. My plans are to multi graft the lower limbs to this method. If I remove whole limbs the cuts would be so big I don’t think they would ever heal. I think if the insterstem was changed to Harrow a similar dwarf effect would be obtained with earlier fruiting. I added about ten of these type grafts this year. 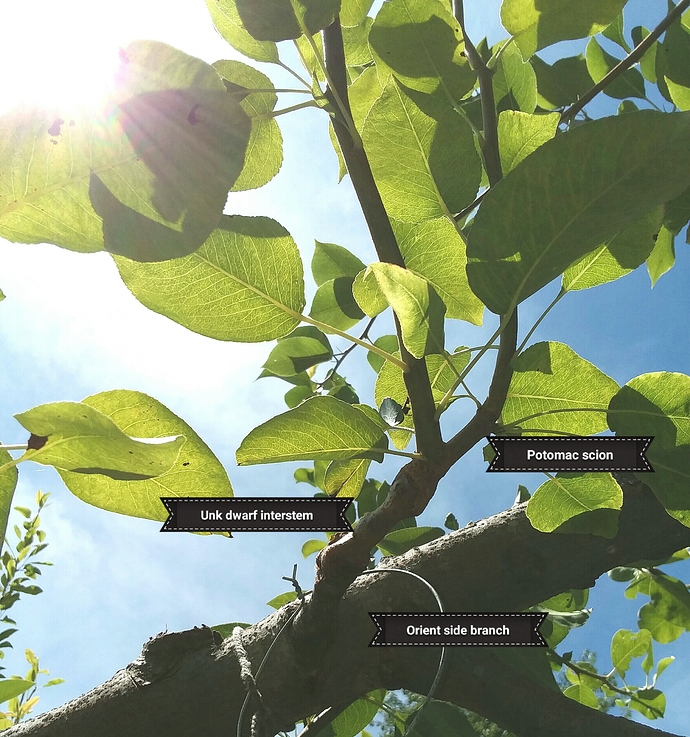 I didn’t know you could graft pears onto an ash tree.

I grafted Pineapple onto Magness and it fruited in just two years
and this is on OHxF97.

I grafted about 15 E pears varieties on it. So all these varieties are on the sane tree. The only variable is the size of scionwood, some were smaller than others.

Quickest to flower and fruit is Magness. Grafted 2015 fruit 2017 and since.

The one that looks like it will take along time is Warren. Grafted 2015. No flowers yet as of this year.

@mamuang
Bet Warren flowers next year for you. The others fruited very quickly. How do you like Blakes Bride?

Not liking it. Gritty and bland two years in a row. Hopefully it will get better this year. It does not fit the description from Schlabach. It is disease resistant to dire blight but not to pear blister mites.

me neither until this spring. found it on a link someone shared on here.

An interesting theory and an interesting article. I grow apples rather than pears, but there are some apple varieties like Northern Spy that can take over ten years to produce. I think I will try grafting some Northern Spy scions onto a producing tree next year and see what happens. Thanks for the info.