What pears are quince compatible?

Many of you are aware pears grafted on a quince rootstock produce very fast. Thought it might be nice to start a thread on the pears that are compatible http://www.ars-grin.gov/cor/catalogs/pyrcompatible.html. This is additional information Quince as Pear Rootstock - Fruit & Nut Research & Information Center
This document has an extensive list of compatibility of many pears http://lists.ibiblio.org/pipermail/nafex/attachments/20120114/48efdf88/attachment.pdf
Fasinating document discussing pear compatibility Compatibility
Another great document on pear and quince compatibility Pear Cultivars

Oregon State at this link http://horticulture.oregonstate.edu/system/files/ond080101.pdf advises Quince A Compatible pears are the following.

Thanks for the list(s).

It’s interesting that Old Home is compatible but Farmindale isn’t. So I wonder if you can put quince on top of a OHxF rootstock?

The complete list of compatible pears is fairly large according to this link http://lists.ibiblio.org/pipermail/nafex/attachments/20120114/48efdf88/attachment.pdf .

Most people graft the interstem at the same time they graft the scion and then wrap the entire thing in parafilm.

I always grafted the whole thing at once exactly as Clark states and had just as good a success rate as when I did solo grafts.

I have Seckel on Quince from Vintage Virginia Apples. I hope the list is wrong stating it is incompatible.

If you read one of the above references, there is a section about Seckel – the incompatibility is suspect.

They likely used an interstem for compatability or it could be early seckle.

You see any signs of an interstem?

I have a few Euro grafts onto my Quinces for fun to see if they would take.
I have:
Tyson, Magness, Seckle, Aurora, Bloodgood, Summer Blood, Beurre Gifford, Hudar, Wilder Early, Ubileens Gift. and (maybe B. Superfin).
and a medlar too (Pucia Mol Italy).
Only first year, so we shall see if they produce fruit in a few years.

Any thoughts about potential cold-hardiness issues with pears on quince rootstock in zone 5A?

Magness works for sure. Don’t know of the others either way. Tyson maybe is? Let us know what works.

You should have concern as I understand it. The odd winter I think will do them in. I know others may have better advice here.

Where are people getting Quince A from? You all know Concorde can be a delayed producer but easily produces in 3 years on Quince A. Fireblight is a dangerous thing around susceptible varities like Comice and Concorde so if you try it consider yourself warned in advance. Stephen Hayes does not have fireblight to worry about so he grows pears a little different from us and the results are amazing 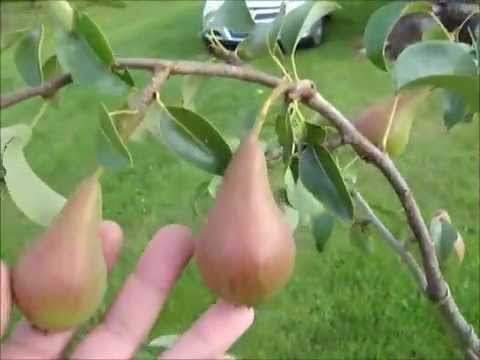 Wildscaper,
I was 100% sure about the list above obtained from NAFEX. I researched them extensively. Nothing beats your experience either! Tyson is compatible “ Tyson won the same rave reviews. Discovered growing in a hedgerow in 1794 on land belonging to Jonathan Tyson of Jenkintown, Pa., it became a major pear cultivar in its day.

U.P. Hedrick, who wrote The Pears of New York, the quintessential book on pears, wrote in 1921 that “Tyson is the best pear of its season for the home orchard” and “No other variety offers so many good starting points for the pear-breeder.”

Though not as large or pretty as its rival, Bartlett, Tyson pears are extra-juicy, sweet and aromatic—and they grow on ultra-hardy trees.”-http://www.hobbyfarms.com/heirloom-pears-3/
Magness is on the list above as are Concorde which is a cross of Doyenné du Comice x Conférence. Conference was a seedling “The female parent is Leon Leclerc de Laval, the male parent is unknown. First discovered 1884, it was taken forward by T. Francis Rivers of the Rivers Nursery of Sawbridgeworth which sadly went out of business many decades ago. The variety was formally named Conference in 1895 at the British Pear Conference” - Your independent guide to pear tree Conference
Doyenné du Comice is an interesting and well known pear! “The parents are not known for this variety. It was bred in France at the Garden of Comice Horticole in Angers in the 1840s. Soon after it was introduced to England. “- Your independent guide to pear tree Doyenne du Comice
Magness like it’s parent Comice is quince compatible. Magness is a cross of “Seckel x Comice. This pear was released by the USDA in 1968 as a very high quality dessert pear that will survive under heavy fireblight pressure. Sometimes tardy to start bearing, but the fruit quality makes up for the light early cropping (branch-spreading will significantly help). Tardy cropping is much less a problem on the OHxF stocks. Mature trees are productive if good pollination is provided. Excellent keeper. Tree is vigorous and spreading.

Magness does not produce good pollen for any other cultivar.”- https://shop.cumminsnursery.com/shop/pear-trees/magness
No one really knows the parents of seckle “It is believed that Seckel pears were discovered growing as a wild sapling in an orchard outside of Philadelphia in the early 1800s. Though there are some that argue that Seckel pears grew from seeds left by German immigrants travelling west. Today, Seckel pears can be found growing in the US Pacific Northwest.”-http://www.specialtyproduce.com/produce/Seckel_Pears_6582.php

Where are people getting Quince A from?

Thanks @Stan at $3.75 per rootstock they seem very reasonable for small orders https://shop.cumminsnursery.com/shop/rootstocks/rootstocks

Any info with quince on pear rootstock?

So far the quince are doing fine grafted to improved kieffer.