Anyone have experience on grafting apple-pear/sand pear on dwarf pear rootstock?

Trying to mound layer dwarf pear suckers in hopes of making it root, then trying to graft an apple-pear onto said sucker. Any information or experience on doing this would be much appreciated!

Are you referring to quince or ohxf333 or another rootstock? Many things like aronia, cotton easter, hawthorn etc. can be used to dwarf pears. There is different degrees of success based on what you use. Apples and pears are not compatible but they are pomes so they can be partially compatible at least for a time. Apples such as winter banana are more compatible with pears than others. There are much better choices for dwarfing apples than pears.

As grafters we all eventually come to the conclusion that some things are easier to graft than others. Apples such as Winter Banana are highly compatible grafts with most any apple tree rootstock or fruiting apple tree for that matter. Frequently grafters who learn this trick may learn to use Winter Banana apples as an Interstem for other things, in extreme cases even pears. It is possible to graft pears to apple or apples to pears but that’s not the scope of what I’m trying to accomplish with …

Which of these pear semi-dwarf rootstocks are best for early bearing, productivity, and toleration of wet, clay soil (growing zone 7a, Tenn.)?? OHxF87 vs. OHxF333 vs. Quince A Thanks for your collective wisdom from experience!

I have experimented with several pear roo…

Hi all, I would like to get your opinion on which dwarf or semi-dwarf apple rootstocks are best for multiple disease resistance and others for growing in the Mid Atlantic VA. USDA zone 8a near the coast with clay below the 16”-22” of topsoil. Thanks for your knowledgeable feedback!

I did a search here and didn’t find what I was looking for. I know folks have grafted pear scions to hawthorns successfully (not sure about long term). What I’d like to know is if there are certain pear cultivars that are more likely to be successful than others? I think the hawthorns I’d like to graft are downy hawthorns, but I am not 100% sure. I’ve got at least two-three different species of hawthorns here. Those that I’m targeting to graft pears to are some of the larger specimens I hav…

Anyone using Aronia as a rootstock for anything? I have a Shipova on one, very slow growing. Supposedly it will hasten fruiting. I’m wondering if pears would take? If I have extra scion wood this winter I may try it out.

I tried to create some miniature pear trees by grafting onto serviceberry, aronia,and Chinese haw. The ones on seviceberrry and aronia both took but remained too tiny after two years so I threw them away, The one on Chinese haw is thriving, maybe too much for my miniaturizing ambition. Im not sure of the cultivar, the tree was here when I bought the property. I think it looks like Nijisseiki. I cant remember for certain. I believe at the time I was looking at research reports regarding dwa…

Many of you are aware pears grafted on a quince rootstock produce very fast. Thought it might be nice to start a thread on the pears that are compatible http://www.ars-grin.gov/cor/catalogs/pyrcompatible.html. This is additional information Quince as Pear Rootstock - Fruit & Nut Research & Information Center This document has an extensive list of compatibility of many pears http://lists.ibiblio.org/pipermail/nafex/attachments/20120114/48efdf88/attachment.pdf Fasinating document discussing pea…

Clara frijs, douglas, small yellow pear, farmingdale, harrow delight, clapps favorite , improved kieffer, harrow sweet are extremely easy pears to graft. You might be wondering why do we care or need this information? The hard pears to graft such as ayer not ayers for me failed on every callery i tried it on. The difficult to graft callery pears in every case i was able to graft with my small yellow pear , harrow delight, farmingdale or as a last resort clara frijs or douglas. That means if y…

It’s much better if i don’t let a callery go to long but occasionally I do. There is a big difference between a 2 and 3 year old callery. This one was more like 4 years old i think because it was in an older orchard it got overlooked twice. Clearly the grafts failed and it should have been t- bud grafted. Planting large amounts of rootstocks then grafting them in 1 or 2 years is a great strategy at my orchard. Allowing the roots to get established gives the tree more resistantance to dro…

I’ve heard of many people putting pears on quince to dwarf the tree. Quince on pear is something I have not heard of. England’s nursery has quince scions. Some quince are not fireblight prone.Any reason to not graft quince to pears?

My grandfather said they were Asian Pears, I don’t know if any quince rootstocks develop suckers, I’m also sort of new to grafting so I’m still trying to understand all the different rootstocks available and their growing habits. 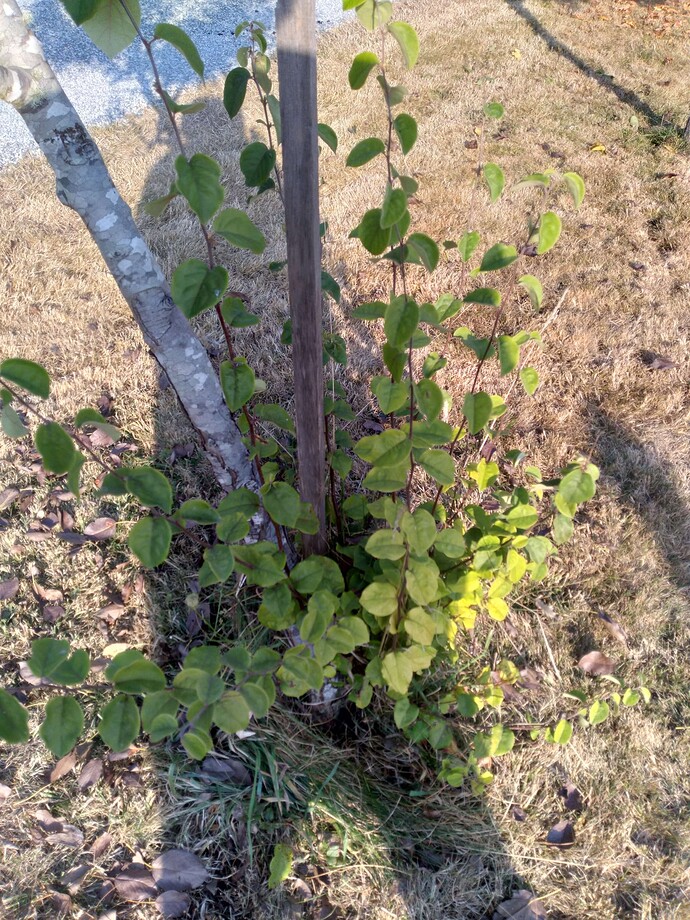 Dwarf Pear Suckers1920×2560 803 KB
This image is dwarf Asian pear, unknown rootstock; all I know is that its a dwarf because of the stake. 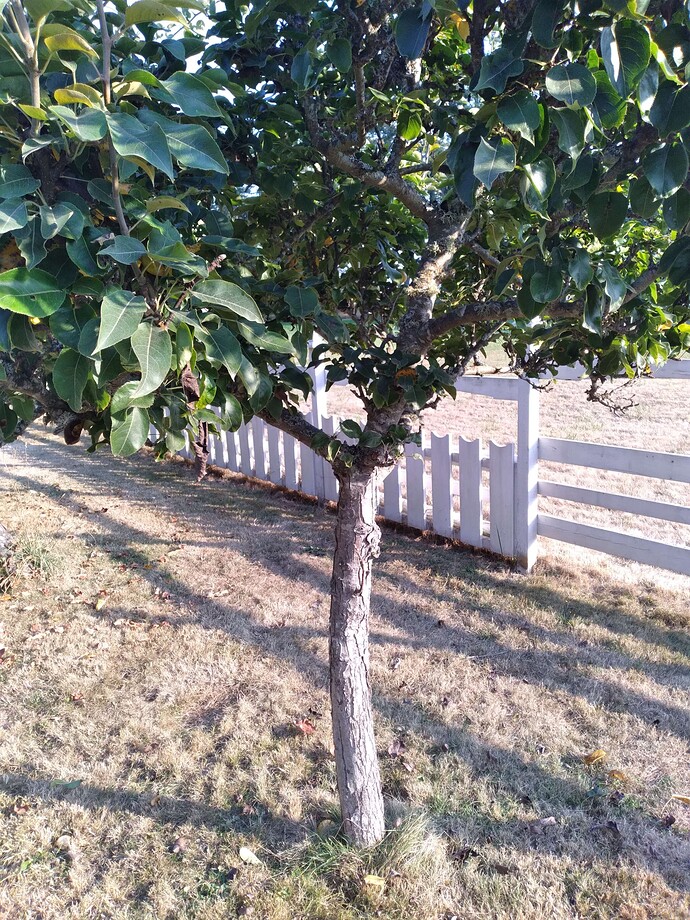 Japanese ApplePear 20221920×2560 972 KB
And then here’s the apple-pear, I do have other apple trees nearby, but they don’t seem to produce any suckers.
Seems like if chances of me grafting apple-pear onto an Asian pear are limited, perhaps I should try to air layer the apple-pear come early next spring?
2 Likes
clarkinks October 19, 2022, 11:03am #4

Apple pear / asian pear in most cases should be one in the same. They graft to pears normally. There are exceptions.

There is a interspecific hybrid called an apple pear grown on apple rootstock. @39thparallel grows it. Very large green fruit that ripens in late summer/ early fall. Mike can likely tell you more about the apple/pear than nearly anyone. They are good tasting fruit.

Was your grandpa a grafter?

We will gladly help you get started with this. Do you know where the tree came from?

The apple pear interspecific hybrid if thats what it is may have originally came from Richard Fahey who can only be contacted via mail. It may have originally been from ars/grin. To contact Richard send a SASE for his scions list. He might respond to questions if you send a sase. The address is Singing Tree Acres Rd 2, Oxford, NY 13830. Richard is in his 70’s+ so he does not use things such as email or internet.

Interesting to know that asian/apple pears can grow true to type from seed, and hopefully cuttings. We have unfortunately harvested all the fruit this year, and have eaten all of them with seed inside… I could possibly try to root some of the new growth it has produced in the late summer and see if they will take.

Unfortunately the sources you’ve provided to me are all in the US - I live in Canada British Columbia specifically. The CFIA controls most imports of scions, rootstocks and or dormant cuttings/live plants from entering BC.

My grandfather was not a grafter, he bought most of his trees from a nursery that has since closed down back in the mid 80’s. Most of the trees on this line were planted in 86, exceptions including the two Asian pears, and apple pear.

I would really like to know however, if I were to take a softwood/semi-hardwood cutting, and dip it in some rooting hormone, and plant it in soil indoors and overwinter it, will I have a the same type of fruit that grows on this tree? 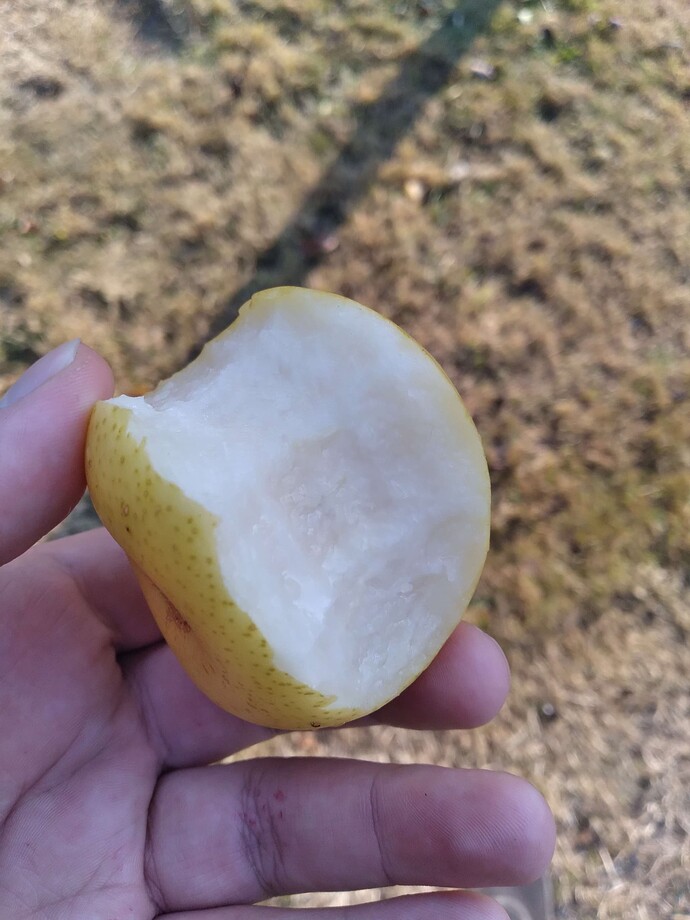 Seedlings dont grow true to type. Some things are close like wolf river apple. If you want to take a cutting from the fruit bearing part of the tree and root it the fruit will be the same but the tree may no longer be a dwarf. The suckers coming up from the roots are likely a different type of tree. There are plenty of topics on grafting which is one way to get what you want.

Some varieties of pears are not compatible on Quince rootstock. There was a list posted on this message board of compatible and incompatible varieties.

Yes here is a list i put up years ago What pears are quince compatible?